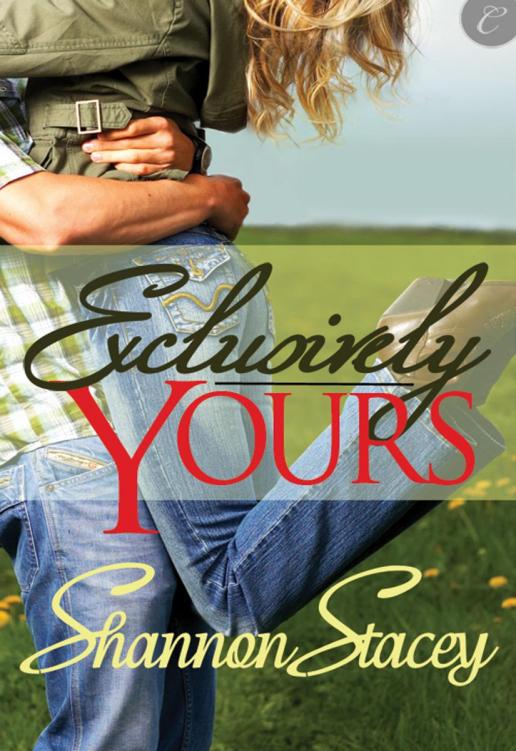 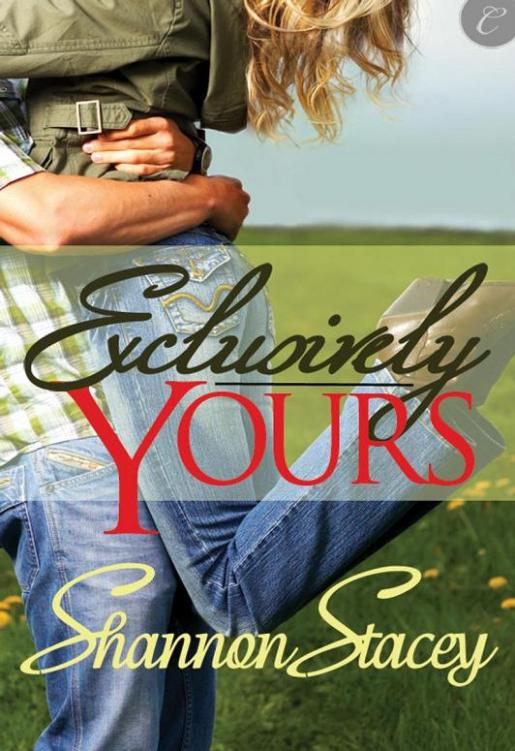 When Keri Daniels’ editor finds out she has previous carnal knowledge of reclusive bestselling author Joe Kowalski, she gives Keri a choice: get an interview or get a new job.

Joe’s never forgotten the first girl to break his heart, so he’s intrigued to hear Keri’s back in town—and looking for him. Despite his intense need for privacy, he’ll grant Keri an interview if it means a chance to finish what they started in high school.

He proposes an outrageous plan—for every day she survives with his family on their annual camping and four-wheeling trip, Keri can ask one question. Keri agrees; she’s worked too hard to walk away from her career.

But the chemistry between them is still as potent as the bug spray, Joe’s sister is out to avenge his broken heart and Keri hasn’t ridden an ATV since she was ten. Who knew a little blackmail, a whole lot of family and some sizzling romantic interludes could make Keri reconsider the old dream of
Keri Joe 2gether 4ever
.

Thank you for purchasing this Carina Press launch title. During our journey these past months to acquire manuscripts, develop relationships with authors and build the Carina Press catalog, we’ve been working to fulfill the mission “Where no great story goes untold.”

If you’d asked me what I’d be doing a year ago, I never would have conceived I’d be working with the brilliant team behind Harlequin’s digital program to bring you a new and exciting digital-first imprint. I have long been a fan of Harlequin books, authors and staff and that’s why I’m so pleased to be sharing these first Carina Press launch titles with you.

At Carina Press, we’re committed to bringing readers great voices and great stories, and we hope you’ll find these books as compelling as we do. In this first month, you’ll find a broad range of genres that showcase our promise to Carina Press fans to publish a diversity of content. In the coming months, we’ll add additional genres and continue to bring you a wide range of stories we believe will keep you coming back for more.

We love to hear from readers, and you can e-mail us your thoughts, comments and questions to [email protected] You can also interact with Carina Press staff and authors on our blog, Twitter stream and Facebook fan page.

Dedication
For Stuart and our boys because there’s no greater joy than sitting around the campfire with you after a fun day of riding the trails. I love you all madly, even when you’re muddy and smell like bug spray. For Steve and Carla, who not only give our family a place to play, but brought great friends into our lives. And thank you to my editor, Angela James, for a taking a book so close to my heart and making it better.
Contents
Copyright
Chapter One
Chapter Two
Chapter Three
Chapter Four
Chapter Five
Chapter Six
Chapter Seven
Chapter Eight
Chapter Nine
Chapter Ten
Chapter Eleven
Chapter Twelve
Chapter Thirteen
Chapter Fourteen
Chapter Fifteen
Chapter Sixteen
Chapter Seventeen
Chapter Eighteen
Chapter Nineteen
About the Author
Chapter One
“You got busy in the backseat of a ’78 Ford Granada with Joseph Kowalski—only the most reclusive bestselling author since J. D. Salinger—and you don’t think to tell me about it?”
Keri Daniels sucked the last dregs of her too-fruity smoothie through her straw and shrugged at her boss. “Would
you
want anybody to know?”

“That I had sex with Joseph Kowalski?”

“No, that you had sex in the backseat of a ’78 Granada.” Keri had no idea how Tina Deschanel had gotten the dirt on her high school indiscretions, but she knew she was in trouble.

An exceptionally well-paid reporter for a glossy, weekly entertainment magazine did not withhold carnal knowledge of a celebrity on the editor-in-chief’s most wanted list. And having kept that juicy little detail to herself wouldn’t get her any closer to parking her butt in an editorial chair.

Tina slipped a photograph from her purse and slid it across the table. Keri didn’t look down. She was mentally compiling a short list of the people who knew she’d fogged up the windows of one of the ugliest cars in the history of fossil fuels. Her friends. The cop who’d knocked on the fogged-up window with a flashlight at a really inopportune moment. Her parents, since the cop was in a bad mood that night. The approximately six hundred kids attending her high school that year and anybody
they
told. Maybe short list wasn’t the right term.

“It was 1989,” Keri pointed out, because her boss clearly expected her to say something. “Not exactly a current event. And you ambushed me with this shopping spree.”

Actually, their table in the outdoor café was surrounded by enough bags to stagger a pack mule on steroids, but now Keri knew she’d merely been offered the retail therapy
before
the bad news. It shouldn’t have surprised her. Tina Deschanel was a shark, and any friendly gesture should have been seen as a prelude to getting bitten in the ass.

“Ambushed?” Tina repeated, loudly enough to distract a pair of Hollywood starlets engaging in some serious public displays of affection in a blatant attempt to attract the cheap tabloid paparazzi. A rabid horde that might include Keri in the near future if she didn’t handle this correctly.

“How do you think I felt?” Tina went on. “I reached out to a woman who mentioned on her blog she’d gone to high school with Joseph Kowalski. Once there was money on the table, I made her cough up some evidence, and she sent me a few photos. She was even kind enough to caption them for me.”

Keri recognized a cue when it was shoved down her throat. With one perfectly manicured nail she hooked the 8x10 blowup and pulled it closer.

A girl smiled at her from the photo. She wore a pink, fuzzy sweater, faded second-skin jeans and pink high heels. Raccoon eyeliner made her dark brown eyes darker, frosty pink coated her lips and her hair was as big as Wisconsin.

Keri smiled back at her, remembering those curling iron and aerosol days. If the EPA had shut down their cheerleading squad back then, global warming might have been a total non-issue today.

Then she looked at the boy. He was leaning against the hideous brown car, his arms wrapped around young Keri’s waist. Joe’s blue eyes were as dark as the school sweatshirt he wore, and his grin managed to be both innocent and naughty at the same time. And those damn dimples—she’d been a sucker for them. His honey-brown hair was hidden by a Red Sox cap, but she didn’t need to see it to remember how the strands felt sliding through her fingers.

She never failed to be amazed by how much she still missed him sometimes.

But who had they been smiling at? For the life of her, Keri couldn’t remember who was standing behind the camera. She tore her gaze away from the happy couple and read the caption typed across the bottom.

Joe Kowalski and his girlfriend, Keri Daniels, a few hours before a cop busted them making out on a back road and called their parents. Rumor had it when Joe dropped her off, Mr. Daniels chased him all the way home with a golf club.

Keri snorted. “Dad only chased him to the end of the block. Even a ’78 Granada could outrun a middle-aged fat guy with a five iron.”

“I fail to see the humor in this.”

“You didn’t see my old man chasing taillights down the middle of the street in his bathrobe. It wasn’t very funny at the time, though.”

“Focus, Keri,” Tina snapped. “Do you or do you not walk by the bulletin board in the bull pen every day?”

“And have you not seen the sheet marked ‘
Spotlight Magazine
’s Most Wanted’ every day?”

“And did you happen to notice Joseph Kowalski has been number three for several years?” Keri nodded, and Tina leaned across the table. “
You
are going to get me an exclusive feature interview with the man.”

Tina sat back and folded her arms across her chest. “Don’t take it to that point, Keri. Look, the man’s eleventh bestseller is going to be
the
summer blockbuster film of the decade. More A-listers lined up to read for that movie than line up on the red carpet for the Oscars. And he’s a total mystery man.”

“I don’t get why you’re so dedicated to chasing him down. He’s just an author.”

“Joseph Kowalski isn’t just an author. He played the media like a fiddle and became a celebrity. The splashy NY parties with that gorgeous redhead—Lauren Huckins, that was it—on his arm. Then Lauren slaps him with a multi-million dollar emotional distress suit, he pays her off with a sealed agreement and then he disappears from the map? There’s a story there, and I want it. Our readers will eat him up, and
Spotlight
is going to serve him to them because you have access to him nobody else does.”

“Had. I
had
access to him.” Keri sighed and flipped the photo back across the table even though she would rather have kept it to moon over later. “Eighteen years ago.”

“You were his high school sweetheart. Nostalgia, darling! And rumor has it he’s still single.”

Keri
knew
he was still single because the Danielses and Kowalskis still lived in the same small New Hampshire town, though Mr. and Mrs. Kowalski lived in a much nicer house now. Very
much
nicer, according to Keri’s mother.

“You’ve risen fast in this field,” Tina continued, “because you have sharp instincts and a way with people, to say nothing of the fact I trusted you. But this…”

The words trailed away, but Keri heard her boss loud and clear. She was going to get this exclusive or her career with
Spotlight
was over and she could start fresh at the bottom of another magazine’s totem pole. And since her career was pretty much the sum total of her life, it wasn’t exactly a threat without teeth.

But seeing Joe again? The idea both intrigued her and scared the crap out of her at the same time. “He’s not going to open up his insanely private life to the magazine because he and I wore out a set of shocks in high school, Tina. It was fun, but it wasn’t
that
good.”

Now she was flat out lying. Joe Kowalski had set the gold standard in Keri’s sex life. An ugly car, a Whitesnake tape, cheap wine and Joe still topped her personal “Ten Ways to a Better Orgasm” list.

Tina ran her tongue over her front teeth, and Keri had known her long enough to know her boss was about to deliver the kill shot.

“I’ve already reassigned your other stories,” she said. It was an act of interference entirely inappropriate for Tina to do to someone of Keri’s status at the magazine.

“I can’t overstep boundaries I don’t have, Daniels. It’s my magazine, and your promotion to editorial depends on your getting an interview with Kowalski, plain and simple.” Then she reached into her purse and passed another sheet to her. “Here’s your flight information.”