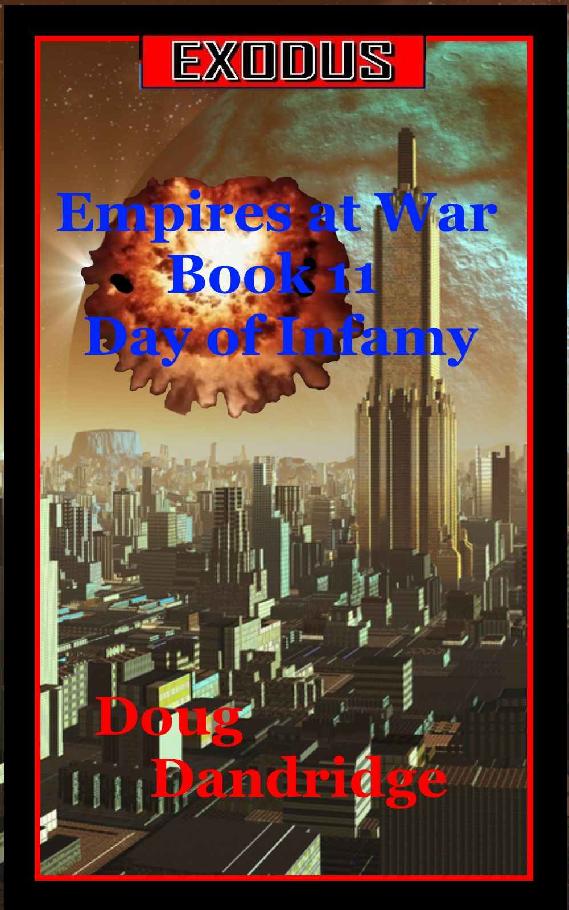 This novel is dedicated to my loyal fans and
friends who stood by me, encouraged me, and showered me with good wishes while
I struggled with health problems.  This book, produced during a trying
time, is for you.  Thanks to all of you.

Please respect the hard work of this
author.  If you found this book for free on a pirate site, please visit
Amazon and buy a copy of your own.  I feel that I charge a reasonable
price for this work.

For
more information on the Exodus Universe, visit
http://dougdandridge.net
for maps, sketches and other details of this work.

The
Story So Far is now located at the back of the book, on the recommendation of
many fans.

Exodus: Empires at War: Book 6: The Day of Battle

Exodus: Tales of the Empire: Beast of the Frontier.

To Well and Back

The Shadows of the Multiverse

Diamonds in the Sand

We Are Death, Come for You

Doppelganger: A Novel of Refuge

Sign
up for my Newsletter at
Mailchimp
to receive news about upcoming
projects, releases and promotions.

Devera Walborski:
Warrant Officer Medic and
the wife of Cornelius.

“Everything is almost in
place, Supreme Lord,” reported the Supreme Admiral, the overall commander of
the Ca’cadasan fleet.

The Supreme Emperor of
the Ca’cadasan Empire Jresstratta IV looked at the trio of males on the holo,
trying to determine how they really felt about this plan through the normal
wooden expression of their kind.  The Supreme Admiral seemed to be showing a
little excitement, while the other two were stone-faced.  No, that wasn’t quite
true.  The Great Admiral who had come up with the plan, the Chief of
Operations, appeared to be slightly nervous.  Not surprising, since failure
would fall upon his head.

The Emperor looked at the
holo plot hanging in the air to his front.  The locations of the two
infiltration ships were just within the space of the human Empire, transmitted
to the capital by the wormholes they carried.  The other groups, many of them,
were still positioned on the Ca’cadasan side of the frontier, except for the
forces that had already snuck across.

“What of our human
pawns?” asked the Emperor.

“They know what they need
to know,” answered the Great Admiral who had formulated the plan.  “They think
there is a chance that they might return from their mission, the fools.  And
once they aid us in destroying the Empire of their own people?  Then what need
for them?”

Then they will follow
their people into oblivion
, thought the Emperor.  Not a just reward for the service
they would perform, but what had been decreed by the last Emperor, the current
Monarch’s father.  And as unjust as he felt it to be, he saw no reason to
reverse it.  His people believed without reservation that the human species
needed to be exterminated, and he felt no need to steal their well-deserved
revenge from them.  It would be hard on the human species, but they had brought
it on themselves.  The Emperor dismissed thoughts of justice and again focused
on the plot hanging in the air.

It’s a complicated plan
, thought the Emperor
with some trepidation.  If it succeeded, the human Empire was sure to collapse,
and his fleet would roll over them.  If it didn’t?  Then he could lose a fleet,
but then again, he had plenty of ships to form other fleets.

It was an audacious plan,
something the Ca’cadasans didn’t excel at.  The plan for the main battle was
something that most commanders of the past would recognize.  With the exception
of the wormholes those forces would be carrying.  Not enough for what the
Emperor wanted to do, but all he had at the moment.  They couldn’t do what the
humans did with their thousands of portals.  They didn’t have the weapons that
the humans fired through their wormholes, weapons that gave the enemy a great
advantage.  But if used wisely they could still serve as a force multiplier,
and catch the humans off guard.  And that was the audacious part of the plan,
not simply depending on the firepower of the massive fleet.

If the second part of the
plan worked they would take the advantages away from the humans.  They would no
longer have their wonderful and terrible wormhole weapons, nor would they have
the ability to shift forces across their Empire like they had in the past.
That they would still have some wormhole gates was a given, but they would not
have the network they had built up over the war.  They would find themselves
scrambling to work around the collapse of that network.

“Proceed,” ordered the
Emperor, his teeth showing in a predatory smile.  “Cut the head off the beast,
and give my people a victory.  Give me a victory.”

“We still advise that we
wait until the Cacas launch another offensive, your Majesty,” said Grand High
Admiral Sondra McCullom, Chief of Naval Operations for the Imperial Fleet.

“I was always taught that
the offensive was the only way to win a war, Admiral,” replied the Emperor of
the New Terran Empire, Sean Ogden Lee Romanov, the first of his name.

“The defense still has
its advantages, your Majesty,” said the senior officer of the Fleet.  “It’s
true that we will eventually have to take it to the enemy, but I would rather
wait until we have more of the technological advantages we are developing
before we start pushing our fleet into their space.  If we can engage them in
some battles that play to our defensive advantages, we can whittle them down a
bit.  But don’t worry.  I think that in another year we can go on an offensive
that will eventually take us to their home world.”

Sondra smiled at the
naiveté of the Monarch, who, though extremely intelligent, was still very
young.  He was a budding military genius, well read on all of the aspects of
warfare.  But all of the wars that he had studied had been relatively short
lived affairs, from one to six years.  An artifact of fighting either on the
surface of a planet, or across a relatively reasonable distance through space.
This would not be such a war.

“At least a decade, your
Majesty,” said the CNO.

“But, it’s only six
months travel time from our frontier to their capital.”

“And if there was no
resistance, we could go from our frontier to their capital in that time.  Just
a nice hyper VII cruise.  Unfortunately, we will have to fight our way through
an enormous fleet and hundreds of well-fortified systems.  Sure, we can bypass
some of them, and the wormholes will take some of the pressure off of our
supply lines.  But it would be foolhardy to thinks these beings are just going
to roll over and die once we start penetrating their space.  And if we take
their capital?  We still could have an enormous empire to conquer if they don’t
decide to surrender.”

“And I doubt they would,”
said Sean.  “After all, there are a lot of species in this Galaxy that are
looking for payback.   And they will try to avoid that at all costs.”

Sondra nodded.  Something
she liked about this Emperor was the way he tried to look at the facts before
making his decisions.

“We have a long hard road
ahead of us.  Thank God we have the tech advantages we have, and we will only
increase our lead.  If we don’t jump into any frivolous offensives and waste
our forces, and if we hit them where they are weak, we will win this war.  But
against an opponent so large, nothing is a given, and I advise caution.”

“Then that is what we
will do,” said Sean, nodding.  “We will do as you and your planning staff think
best.”

As long as we are correct
, thought the CNO.
As
soon as we make a mistake, we’re fired, and someone else will take charge.

The Body In the Vestibule by Katherine Hall Page
Hector and the Secrets of Love by Francois Lelord
Fearless by Annie Jocoby
From the Chrysalis by Karen E. Black
Cold Cold Heart by Tami Hoag
Samantha James by One Moonlit Night
Elizabeth Street by Fabiano, Laurie
Lust, Loathing and a Little Lip Gloss by Kyra Davis
Sunset & Vine: Loose Lips by Per Hampton
Tipping Point by Rain Stickland
Our partner