Exodus of the Xandim (GOLLANCZ S.F.) 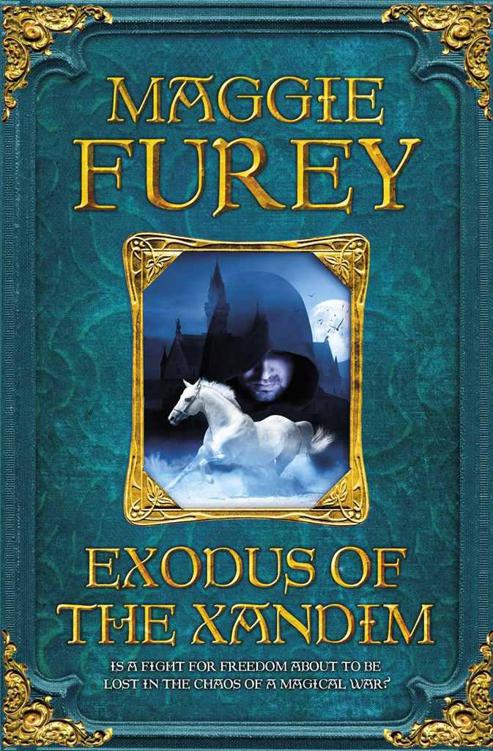 Dedicated with love to my sister, Lin Stockley,

May your future hold nothing but happiness.

6. THE SORROW OF THE DWELVEN

7. FROM ENDINGS TO BEGINNINGS

8. THE SECRETS IN THE STONE

18. MORE THAN ONE SURPRISE

19. GUARDIAN OF THE PORTAL

30. DEPART IN SORROW, RETURN IN JOY

34. VENGEANCE OF THE MOLDAN

37. LOOKING TO THE FUTURE

THE MAGIC OF AIR

M
any momentous events took place in the winter when the Wild Hunt was ambushed by mortals and the Forest Lord Hellorin was lost to the world,
betrayed by the malice of Ferimon. In Eliorand, Tiolani, the Forest Lord’s daughter, was seduced by the same evil traitor as part of his plan to rule the Phaerie, and the grey mare Corisand
discovered her responsibilities as Windeye of the Xandim. In Tyrineld, the Archwizard Cyran’s broodings over his dread visions of war and destruction were supported by the premonitions of his
fellow Archmages, and the blind Wizard Iriana’s dreams of freedom and adventure were finally realised, though she never could have guessed what would lie in store for her before the
summer’s end.

While in the north the strands of the approaching crisis were spinning out thick and fast upon the web of fate, circumstances were moving towards another crisis elsewhere, in the far lands of
the south: in the ocean deeps for the Leviathan; in the glittering glory of the Jewelled Desert for the Dragonfolk; and in beautiful Aerillia, the soaring mountain city of the Skyfolk.

The Winged Folk of Aerillia were generous to visitors, thought Yinze. The chambers set aside for guests were high up on the pinnacle of the mountain, just below the complex of buildings that
formed the Royal Palace, and the view from the landing platform was stunning. To a Wizard’s eye, the city looked utterly alien but very beautiful, with some of its buildings suspended from
the precipitous crags and others carved out of the mountain peak itself. He had been here over half a year now and was used to the view, but the slender spires and turrets of pale, almost
translucent stone, and the delicately crafted structures that seemed to cling like coral to the steep rock face, still filled him with amazement. There were no angles in Aerillia; no hard corners
to form awkward air currents, or hurt an unwary flier who’d been hit by an unexpected gust of wind. Everything looked streamlined, fluid, organic: a miracle wrought, by magic and tremendous
labour, from the mountain’s very bones.

It was spectacular. It was beautiful. It was no place for someone without wings. Though it was possible to access some places by going through a labyrinth of intervening buildings, the routes
were tortuous and inconvenient, for the simple reason that the Winged Folk never used those routes except during the worst of the stormy weather, and many places were completely inaccessible except
by flight. It was for this very reason that the Skyfolk, unlike the Phaerie, the Wizards and the Dragonfolk, did not possess human slaves – at least, not in Aerillia itself, though they were
used down in the valleys to cultivate crops, and to mine the jewels and precious metals with which these mountains abounded.

To fulfil the domestic functions in the city itself the Skyfolk used instead a special low caste of their own kind, known as the Forsaken, who were barred from any existence other than obedience
and drudgery. Yinze had been allocated some of these to be his own staff during his stay here. As well as Kereru, a motherly winged woman to clean and cook for him, he had four sturdy young men
whose function it was to transport him wherever he wanted to go, strapped into a carrying sling and suspended below them like a piece of cargo as they soared effortlessly across the gulfs of empty
air.

It was inconvenient, terrifying, and worst of all, utterly humiliating. Though it was sometimes unavoidable, the Wizard used that mode of transport as little as possible, and therefore his
movements were circumscribed and he suffered limitations that he had never known before. Always vigorous and active at home, here Yinze ached from lack of exercise. Sometimes he felt so bad that
he’d be forced to get his bearers to take him down the mountain to the valleys and terraces where crops were grown and sheep and goats were bred. He would walk and run himself into a state of
exhaustion, thinking wistfully of Tyrineld’s olive groves and sparkling blue bays, its warm, herb-scented breezes and the laughter and company of his friends.

Beyond Aerillia the eye was led across the breathtaking vista of lower, snow-covered peaks beyond, right to the glittering line on the far horizon which marked the beginning of the Jewelled
Desert. It was almost worth freezing for. Now, at sunset, the mountains were tinted with amethyst and rose, and shadows darkened the pale stone of the city’s buildings. At this time of year,
everyone in the city went to bed early. The temperature plunged after nightfall, and even the hardy Skyfolk found it more pleasant to snuggle beneath the bedclothes. Supper hour had passed, and
Yinze was standing on the landing platform of his room, taking his customary last look out before retiring.

The Wizard shivered, and tried to bury himself deeper into his thick woollen cloak. In Tyrineld, even the winter nights were a great deal warmer than this, but Aerillia, though situated further
south, was set high in the mountains, and the season’s chill bit deep. The Winged Folk had a tremendous tolerance of the freezing conditions, but the cold was beginning to wear upon their
guest. Though Yinze felt a pang of sadness at the thought of parting from the new friends that he’d made, he was desperately missing the sunlit warmth of his home. Even supposing he stayed
here all his life (perish the thought), he would never grow accustomed to this temperature!

He stamped his freezing feet on the pale stone of the landing platform, and began to walk up and down to try to keep warm. Under his cloak he was wearing layers of clothing: a sleeveless
fleece-lined sheepskin tunic, and beneath it a baggy knitted overshirt. Beneath
that
he had a thick flannel shirt, sturdy woven pants of wool, and finally, under everything else, two pairs
of thick socks and long, thick, winter underwear. A knitted cap in knock-your-eyes-out purple, a contribution from his mother Zybina, was crammed over his dark curls and pulled well down to cover
his ears, and a matching scarf was wound twice around his neck. Sturdy knee-length leather boots and big leather gauntlets with a secret pair of purple woollen gloves worn beneath them completed
the outfit. ‘And I
still
can’t get warm,’ he muttered to himself through chattering teeth. ‘Guardians preserve us! I’m so glad I’ll be going home
soon.’

How could he bear to go home a failure?

In four months his time here would be up and he would return to Tyrineld with the shame of being the only one who had not fulfilled his mission. Thanks to the sporadic messages that had reached
him in this isolated place, he knew that his friend Chathak had made enormous strides in the Fire magic he was studying with the Dragonfolk, and that good old brainy Ionor had mastered the tricky
magic of Water and gained the respect of the Leviathan in the process.

It was all very well for them. The Dragonfolk Fire magic was a singularly versatile branch of the arcane arts, with a multitude of uses. Water magic, too, could be used in all sorts of practical
ways. But the magic of Air – when you came right down to it – was no bloody use at all. Air was an incredibly elusive substance, and Yinze was finding it impossible to find a place
where his powers could connect. With other elements Air could be fine: put it together with Water magic, for instance, and you got Weather magic, unite it with Fire and you could heat a building or
perform all sorts of clever tricks with light. But like Fire and Water, Earth and Air were opposites; two powers very difficult to combine.

It was too cold to stay outside any longer. Yinze had been lingering, frustrated after another difficult day, in the hope that he might catch a glimpse of Kea. The winged girl, apprentice to
Crombec, the city’s foremost harp maker, was the closest friend he’d made since he’d come to Aerillia, and her pretty face was just what he needed to cheer him . . .

His thoughts broke off in a scream as a heavy weight cannoned into him from the side, knocking him off the platform. As he fell, arms and legs flailing in panic, the freezing air blasted into
his face, snatching his breath away. Terror – pure, mindless terror – squeezed his heart in an iron fist as he plummeted. He saw his purple cap go whirling away on the wind. Sky, city,
mountains cartwheeled around him – and the ground, so far away, was hurtling closer every second.

Something clamped around his ankle, cruelly wrenching his leg but, for a mercy, slowing his fall. As his arms and other leg were caught, he realised that strong hands had him, arresting his
terrifying plunge. Relief swept over him, and though his strained muscles hurt like a rotten tooth, Yinze did not care. The drumming of four sets of mighty wings and the purr of wind through
feathers made the sweetest music he had ever heard as he was borne upwards, back to safety, back to life.

‘Here,’ he heard a voice say. ‘Put him well back from the edge.’ The rescuers set him gently down on his own landing platform. There was a solid surface beneath him and
he could no longer see the dizzying fall. Collapsing like a puppet whose strings had been cut, he threw up his recently-finished supper then curled into a shivering ball, his eyes screwed tight
shut and his fingers trying to dig into the stone.

He heard someone swearing, and recognised Kea’s voice, sharp with anxiety. ‘Yinze, are you all right? Come on, we’ll help you indoors.’

The Wizard was all for that. Though his common sense told him that the platform on which he lay had borne the weight of generations of Skyfolk, it seemed, right now, to be all too fragile a
barrier between himself and the abyss. He opened his eyes to see his team of sturdy bearers; Parea, who was Kereru’s brother, Dunlin, Tinamou and Chukar, all clustering around him, and
Kea’s anxious face looking down. The winged girl knelt beside him to help him up. He caught the scent of her, warm and spicy, like cinnamon – but before he could move, cruel laughter,
harsh and mocking, made him look up at last. There, perched in a row on the edge of the roof like malign gargoyles, were Incondor, a young, black-winged aristocrat who had an evil reputation as a
bully, and his friends, Milvus and Torgos.

The Daykeeper's Grimoire by Christy Raedeke
Hayley Westenra by Hayley Westenra
Feel the Heat (Hot In the Kitchen) by Kate Meader
Patricia Highsmith - The Tremor of Forgery by Patricia Highsmith
A Dark Anatomy by Robin Blake
Finished Off (A Bellehaven House Mystery Book 2) by Kate Kingsbury
The Fountain Overflows by Rebecca West
[Janitors 04] Strike of the Sweepers by Tyler Whitesides
God's Highlander by Thompson, E. V.
Winter Fire by Elizabeth Lowell
Our partner