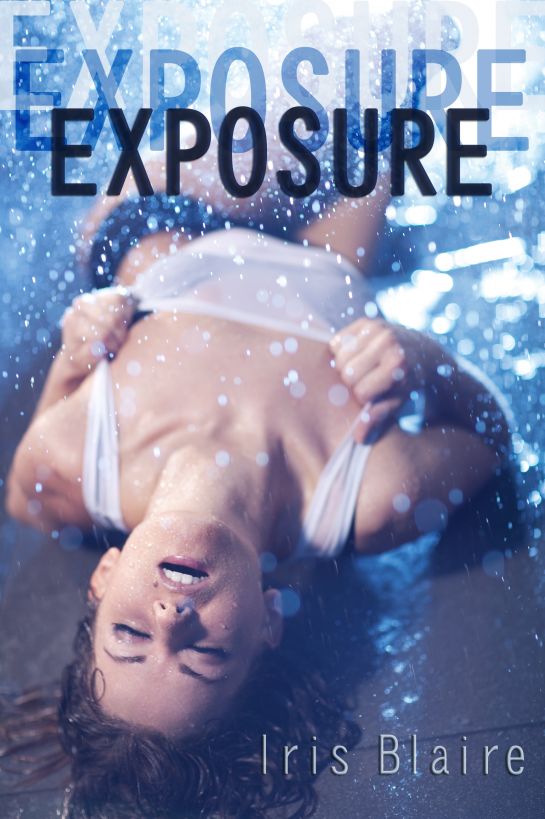 This is a work of
fiction.
Names, characters, places, and
incidents are either products of the author’s imagination or, if
real, used fictitiously.

All rights reserved. No
part of this book may be reproduced, transmitted, or stored in an
information retrieving system in any form or by any means, graphic,
electronic, or mechanical, including photocopying, taping, and
recording, without prior written permission from the
author.

Selling sex is like owning an ice
cream truck. You make all your clients sticky and satiated, and
they’ll remember to come back the next day when they’re hot and
bothered and needing to be quenched.

Right now, I’m selling both. Sex and
ice cream. Haagen-Dazs should give me a freaking
commission.

Britain has me posing with my back
pressed against a tree, a cone of vanilla ice cream tilted in my
dainty fingers. Melted cream drips from my glossy lips and down my
neck. I’m wearing only a pair of pink panties that say EPU written
in university text, and some pink and white striped, knee-high
socks.

The only thing I can use to cover my
tits are my wrists, pressed tightly against my skin to give that
perfect lift—in other words, to make my boobs look fake. Sticky,
melted ice cream runs into my cleavage, dripping all of the way to
my navel.

Britain tosses her blonde hair to the
side and squats, getting a different angle. “Come on, Miss Rylan.
Look more surprised. Like you don’t know what to do about the
mess.”

She only calls me Rylan when I’m not
giving her what she wants. I huff before popping out my ass a
little more, getting the curve in my lower back just right, the
curve I know makes all our subscribers go nuts. I shake out my
sprayed hair a little and try to widen my
naturally-innocent-looking eyes.

Britain sighs and lets the camera
drop. “More, Rylan. Like someone just jizzed all over your face and
you don’t know how you feel about it yet.”

I relax my posture, narrowing my eyes.
“Thank you. For that.”

She shoots me an evil smirk before
raising the camera again. Britain gets off on this shit.

Well, for one, she’s a total voyeur.
And two, when she knows she’s nailed a hot shoot on the head, she
has this excited energy about her. “Boys want sweet, innocent
little Rylan. They want to peel those panties away and deflower you
with their minds.”

It wasn’t always this way.
My shoots used to be more “adulteress” and less “your friend’s
bangable little sister” until last issue. Correction—the success of
last issue. Britain thinks it has to do with
my
shoot—I had been the cover girl,
after all. We’d gone a little fetishey with an oversized teddy bear
and heart lollipop. My hair was in pigtails and the only thing I’d
been wearing were these white Mary Janes.

But our customers ate it up. And they
are the only ones that matter.

So now I’m Rylan
Willow—teeny bopper sweetheart of
East
Park Exposed
. And I don’t think I’ll ever
be able to shake that label.

“
You’re lucky you’re my
best friend,” I tell Britain, smearing more ice cream in between my
breasts and twisting my face to faux shock.
Oopsie
.

“
And you’re lucky I pay
you,” she says, snapping away.

She’s right about that. Damn, do I get
paid well. A couple hours of shoots a week is better than thirty
hours at the coffee shop, which is what I was doing when first
starting college. But pulling straight As in classes like molecular
biology and immunobiotechnology isn’t exactly a cake walk. I need
time. I need to eat.

East Park Exposed
lets me do both of those things. All I have to do
is look like a naked Bratz doll for a couple hours a week and boom.
Groceries paid, tuition paid, rent paid. I’m a core model, meaning
I have a spread in every issue. Part-time models aren’t contracted
and come and go, but I’m promised a pay check for the magazine as
long as I shoot every week. It’s one of the perks of being best
friends with the founder.

“
Alright,” Britain says,
standing. “I think I got something halfway decent.”

I relax and head toward the house, but
not before Britain yells, “Time to hit the showers!” and smacks my
ass. She regrets that move as soon as I fling melted ice cream at
her.

Britain and I live in the house we do
most of our shooting in. I split the rent with her and
core-model-slash-other-bff Delilah Banks. Since it’s usually just
us on a micro-shoot day, I don’t think twice about walking around
the place topless.

Which is why I’m not expecting to run
face-first into a very hard, very broad chest.

Two large hands grip my
shoulders and pry me away, and suddenly I’m staring into the eyes
of a very amused, very gorgeous blonde. He glances down at his
torso, melted vanilla ice cream running into the crevices of his
six-pack. And then, of course, he looks at
my
chest, and the ample melted slush
slathered all over my breasts.

Finally, his eyes meet mine, and with
a glint of recognition, he says, “Rylan Willow, I
presume.”

“
Erm…” I tug away from him
and cross my arms over my chest.

He points to his mouth, swiveling his
finger in a circular motion. “You have something on your
face.”

Keeping one arm pinned to my chest, I
wipe the back of my hand across my mouth. “Who the fuck are you?” I
say, because being brazen is always better than
blushing.

“
Wasn’t expecting you to
have such a bite,” he muses with a coy smile.

“
Oh, shit.” Britain halts
at the edge of the kitchen, running her hand through her flawless
blonde mane. “Ev—err—Rylan, this is Adam, our newest model
addition.”

I try to keep my jaw off
the floor. “
Male
model?”

Britain throws on a forced smile.
“Adam, you mind waiting with Delilah in the shooting
room?”

“
Waiting with
Delilah
?” I ask, but
Britain doesn’t respond until Adam winks at me and makes his way
into the other room.

“
I swear, I was totally
going to tell you…”

“
Delilah and I… well…” She
puts her camera down on the kitchen island and wrings her hands.
“We were talking about expanding our audience. And bringing in
couple male models would be a good opportunity to make EPE less of
a wank show, you know?”

I don’t know why I feel so
blindsided. I mean, it makes sense, but did she really have to keep
a secret with
Delilah from me? We’re like
the three amigos of EPE. Britain always runs shit by us before she
actually goes and executes it.

I glance about the room, making sure
we’re alone. If this Adam guy is sticking around, he’s eventually
going to hear my real name. Fabulous. No boy has ever heard my real
name on set before. Not Rob, our layout genius, not the tech guy,
not the stagecraft boys who help out to get their name in the mag
credits.

No guys ever have the opportunity to
connect Evan Cosette to Rylan Willow. And I’d like to keep it that
way.

She takes a deep breath—the kind of
breath where I know she’s about to spill something that I’m not
going to want to hear. “We have a lot of good applicants. I’m
thinking… I’m thinking we might hire another.”

I roll my eyes. “Whatever. Just keep
me out of shoots with both of them, alright?”

A wicked smile creeps onto her face.
“What, Evan? Afraid of some boy?”

“
Yeah right.” I strut away
from her. “I’d rather not have
some
boy
stealing my spotlight. Or my
fans.”

“
Trust me,” she yells
after me. “Your fans are all about that Rylan ass. They won’t be
looking for men any day of the week.”

Edgy boudoir sells less than softcore,
so I guess with these pink panties and sloppy vanilla ice cream,
I’m going to be the one thrown under the bus to attract the
freshmen with raging boners and cash from their parents.

Our house used to be for two tenants,
until we decided to rent out both sides from the landlords, turning
one side into a studio, the other into our home. Everything is
separate—separate kitchens, bathrooms, bedrooms, even driveways.
The only thing holding the whole house together is a single oak
door by the studio’s living room that glues my two lives
together.

Still in only my panties, I grab my
purse from the couch, dig for my key, and open the door to
home.

The smell of home is totally
different. Less cheap hairspray and shellac makeup and more sugar
cookie and lavender. The sound of my keys rattling against the
kitchen counter echo through the empty space. I relax and glance
toward the stove clock. I have an hour before bio lecture
starts.

I dart up the stairs and into the
bathroom I share with Britain—white and porcelain and always
smelling faintly of lemon cleaner. We’re slightly neurotic. I turn
on the shower, and as the water is heating up, glance at myself in
the mirror.

Teased and sprayed chocolate curls.
Makeup pancaked so thick you can’t even see my freckles any more.
Nora, the hair and makeup girl, has perfected the way she does my
eyes to make those babies pop. And then Britain does her job by
photoshopping my slate irises a bright emerald green. Just another
thing that separates Evan from Rylan.

After dealing with the total misery of
peeling off my fake eyelashes, I step into the shower and allow the
steam-carried-euphoria to take over me. Rylan melts away, with the
help of the all natural berry soap and shampoo that Britain is
totally into.

I dry myself off and wipe the steam
from the mirror. I take out my contacts and shove my glasses on my
face.

Little ugly Evan is back. Glorious
freckles and all.

School garb is all the same. It’s
ritualistic now—the way that no one recognizes me. Victoria’s
Secret yoga pants, East Park sweatshirt, Reef flip-flops, messy
bun, hiptser glasses. And most importantly, no makeup. I sling my
schoolbag over my shoulder, grab a green juice I made earlier from
the kitchen, and head out the door.

I hate night classes with a passion.
The only reason I always sign up for them is so I can lurk around a
dark campus. I never stick around for any of that school spirit
crap. No sororities or clubs or readings or galleries. I’m in and
out of my lectures and labs, not giving anyone a chance to actually
make the connection of where they’ve seen me before.

I slurp on my green juice at the back
of the lecture hall. My netbook is out on the flip-desk and I’m
scrolling through my notes from Monday’s lecture. This is the only
way I can memorize—or even process all of the stuff thrown at me in
the five classes and two labs I’m taking this semester. Reading and
drilling and re-reading….

Jackie Brown by Elmore Leonard
What Isabella Desires by Anne Mallory
The Runaway Princess by Hester Browne
One Moment (The Little Hollow Series Book 1) by Danielle Dickson
Facing the Music by Andrea Laurence
A Tiger's Claim by Lia Davis
On Every Side by Karen Kingsbury
Somewhere in Sevenoakes by Sorell Oates
The Inheritance by Maggie Carpenter
Begin Again (Beautiful #2) by Bester, Tamsyn
Our partner