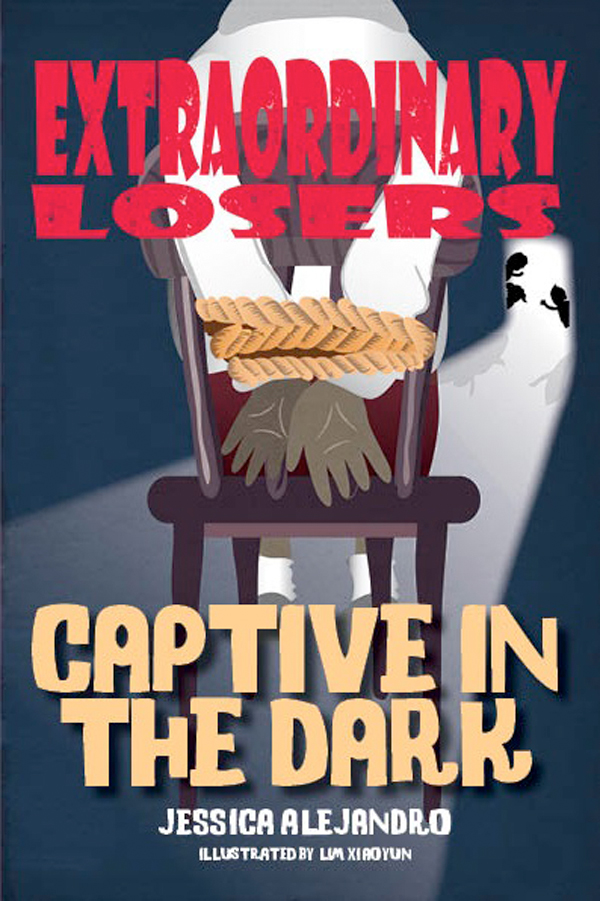 CAPTIVE IN THE DARK

To “Ho Peng Yew”
My most inspiring companions 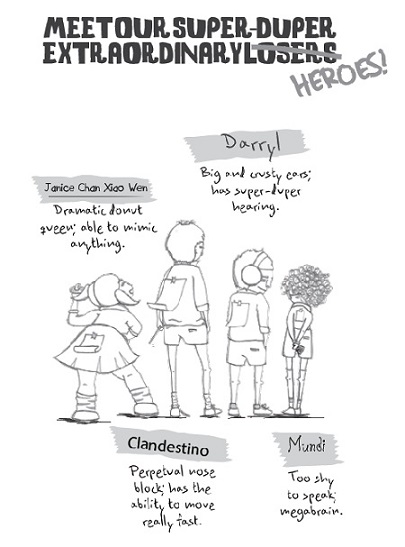 CHAPTER 1: CAPTIVE IN THE DARK

He-he-he-llo-llo? An-an-an-any-one there? No?” the boy asked, shivering. He was about to pee in fear. It was his first question after an hour of silence. He was sure it had been one hour, since he had counted every second since it happened.

The boy had long eyelashes and deep-set eyes but these did not help him in any way here. He could not make out where he was. The smelly cloth around his eyes was wrapped so tightly that his curly hair got entangled in the painful dead knot at the back. It was pitch dark. And very dusty. He could tell from the way his shins were beginning to itch.

Then he heard footsteps. Footsteps that shuffled across the dust-laden floor. But whose were they? He wished he had Darryl's powerful ears! At least they would prove to be more helpful than a brain full of equations, numbers and nothing more. The footsteps grew louder and he heard the jangling of keys. It sounded as though someone was playing an instrument.
Mi fa so. Mi fa so. Mi fa so
. The keys sang with every step. Then a loud snort, and another. Sinus problem, he deduced.

Should I speak again?
he wondered. He was a painfully shy boy. A stutterer who hardly spoke to any teachers. He swallowed his voice in a huge gulp. Just then, the door creaked open. He jerked forward in his seat. But there was no way he could escape. How could he, when his hands and legs were tied up with prickly ropes.

A voice grunted as someone slammed a cold metal plate on the boy's lap. It felt heavy.

The boy bent low enough so that he could smell the contents of his plate. It was the best smell he had experienced in the last few hours. It smelled so good that he bowed even lower and scooped a morsel with his mouth. He had not eaten anything since breakfast at 6 am and he was starving. It was a taste of home, except colder. Cold rice soaked in curry gravy swirled around in his mouth.

Before he could finish his sentence, he heard the door slam shut. Then a loud snort. The footsteps and the jangling keys left as fast as they had arrived.

“He-he-he-llo?” he asked again. He knew the snorts and the footsteps did not belong to a good person, but at least they belonged to someone! Now he was all alone again. Alone in the darkness made darker by his blindfold. He bowed low again to eat his cold curry rice. But the second mouthful didn't taste so good. He could only taste fear in his mouth.

“Darryl, Janice, Clandestino? Mummy? Wh-Wh-Wh-Where are you?” he whispered. “I-I-I have been kidnapped. No?”

It was a cold morning and my eyelids were still plastered together. All the other students bumped me from sideways and behind and some of their elephantine bags even bumped me on my face!

The lower primary students always have school bags larger than they can handle! It's like someone with a car licence driving a lorry instead and ending up crashing into the other cars. Seriously, to be hit in the face by a Power Rangers bag adorned with key chains and hazardous pin badges is no joke at all. After all, I am a Primary 5 boy and for my own sake, and the sake of others, my bag is light â much to my mother's chagrin. All the other “unnecessary books” (and by this I mean all other books except homework) are stored safely under my desk in school.

As I sleepwalked in my semi-conscious state, I noticed a curly-haired boy. Short and skinny and not moving with the herd of children stampeding into school. He was at the security guard post and something seemed to be keeping him.

The other Brightstars continued to shove and push me forward, so much so that I didn't really have to think. I was riding the “Brightstar drift” with Katy Perry blasting through my headphones, until I came to my curly-haired friend.

“Hey, what are you doing, buddy?” I asked as I took out my headphones. 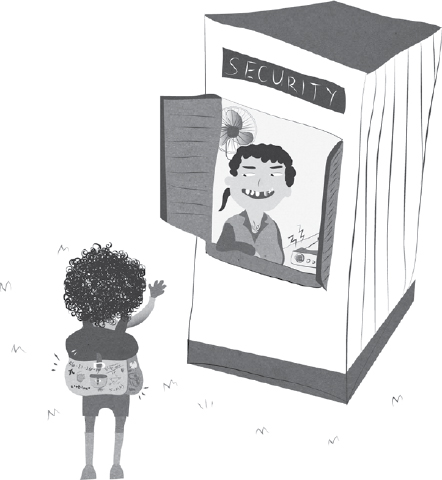 “Huh?!” He was a little shocked to see me. “Nothing, Darryl. No?” He stuffed a small paper bag into his pocket.

“Then, why are you standing here?”

“Nothing, boy,” Uncle Andy said, frowning, like I was a busybody. “Okay, Mundi, you better go off now!”

“Okay!” Mundi clenched his pocket tightly and licked his lips in nervousness.

“Take care, okay! You can start using it today!” Uncle Andy said as his eyes fixed sharply on Mundi like bright beetles.

Mundi nodded and quickly walked towards the canteen, avoiding me.

“Thanks forâ¦?” I said when I caught up with him.

“Hey, Darryl! It's nothing really. No?” Mundi shifted his spectacles into place.

Mundi was a painfully shy boy. He almost never spoke to any adult. Not even his teachers. But since the start of the year, he had been having conversations with Uncle Andy. Uncle Andy had been working in our school for about eight years but no one really bothered about him. No one cared to greet him or say hi.

However, one day during the haze period, Mundi saw how humid and hazy it was and offered Uncle Andy a can of Coke on his way out from school.

“Why did you do that, Mundi?” Janice asked.

“Well, it's so hot, no? Andâ¦ andâ¦ and Uncle Andy doesn't have any air-conditioning in his office. No?”

Just then, Janice took out a clear plastic bag from her school bag. There was only one coffee donut left. She stopped and thought for a while with her finger on her cheek. Then she pinched a little of the donut and popped it into her mouth.

“Hmmm, still tastes good.” She licked her lips. “I shall share this with Uncle Andy too.” She acted as though she was testing to see if the donut was still edible, but we all knew that she couldn't bear to part with it and just had to take a bite before giving it away. 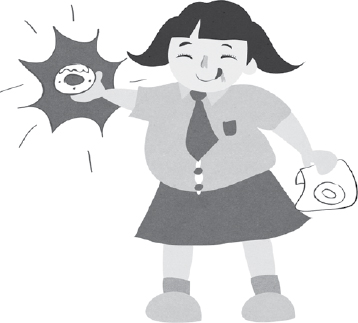 Mundi spoke up. “He must be so bored, directing traffic and collecting identity cards all day.”

Janice strode back and proffered the one-twentieth-eaten donut to Uncle Andy. Uncle Andy was surprised. He looked at all of us, accepted it hesitatingly, smiled and waved back.

Clandestino thought he had quite a cool job. “I wonder how much he is paid.”

“He looks bored,” I said. “That's why he is always blasting his favourite Chinese opera tunes on his little radio!”

“Earache, earache,” I said, covering my ears. If anyone knows about good music, it has to be me. With my superhuman ears, I can discern every tone and every pitch and tell good music from bad.

Uncle Andy did look a bit lonely. Every morning, he would scan the sea of Brightstars marching into school. He probably knew our names, the colour of our bags, the times we arrived and who we hung out with. No one bothered to give him a second look, except maybe Mundi. We knew nothing about him, except that he was Uncle Andy, the guard who liked to unbutton his shirt and blast the neighbourhood with his music.

But today, there was something different about Uncle Andy. What did he give Mundi and why was it a secret? 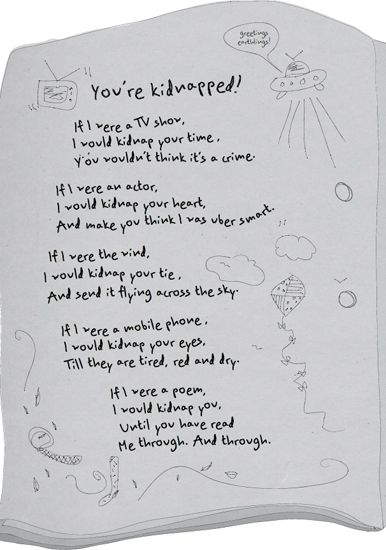 What do we do now?” I looked at Mundi, feeling utterly bored. I felt like Uncle Andy in his guard post.

It was the school's annual sports meet. Because we had our own little stadium, Sports Day was held in school and we didn't have to travel. So, unlike other schools, we couldn't take the whole day off. The day was planned such that lessons would still resume from 12 noon to 1:30 pm for the P5s and P6s, which was a complete waste of time, in my opinion!

I really wanted to listen to my music but I couldn't put on my headphones. Even Uncle Andy had it better. He could listen to his songs as and when he liked! Hot air was blowing from a tiny fan in the spectator stand and I felt like a pig getting roasted alive.

Sports Day is lame. First, only five per cent of the school gets to participate. The sumo-like kids shine in the short putt event. The hyperactive kids show off in the hurdles and jumping events. And the runners are usually made up of the same old ones who do nothing other than run. Well, I guess every dog has its day, and this is their day to shine. The rest of us are made to sit, squint, clap, shout, sit again, scratch, fan ourselves and look as sporty as we can in our brightly-coloured house T-shirts.

Her Unexpected Affair (The Robinsons) by Shea Mcmaster
The Hanging of Samuel Ash by Sheldon Russell
Ice Cream Mystery by Gertrude Chandler Warner
Lady Pirate by Lynsay Sands
Blind Date by R K Moore
Talking to the Dead by Barbara Weisberg
Break Me by Lissa Matthews
Matadora by Steve Perry
Before I Do Amazon by Freethy, Barbara
Down into Darkness by David Lawrence
Our partner