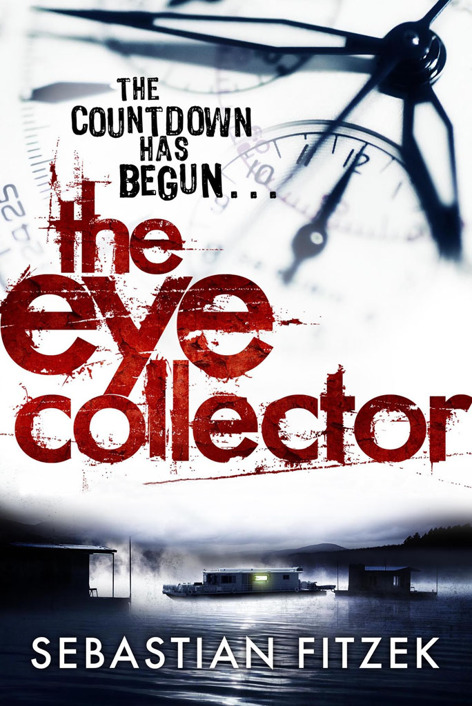 Sebastian Fitzek has worked as a journalist and author for radio and TV stations all around Europe, and is now head of programming at RTL, Berlin’s
leading radio station. His first and subsequent novels have become huge bestsellers in Germany, and he is currently working on his fifth.

Published in trade paperback in Great Britain in 2012 by Corvus,
an imprint of Atlantic Books Ltd.

Originally published in German as
Der Augensammler
in 2010 by Droemer Knaur.

The moral right of Sebastian Fitzek to be identified as the author of this work has been asserted by him in accordance with the Copyright, Designs and Patents Act of 1988.

The moral right of John Brownjohn to be identified as the translator of this work has been asserted in accordance with the Copyright, Designs and Patents Act of 1988.

All rights reserved. No part of this publication may be reproduced, stored in a retrieval system, or transmitted in any form or by any means, electronic, mechanical,
photocopying, recording, or otherwise, without the prior permission of both the copyright owner and the above publisher of this book.

This novel is entirely a work of fiction. The names, characters and incidents portrayed in it are the work of the author’s imagination. Any resemblance to actual
persons, living or dead, events or localities, is entirely coincidental.

In memory of Rüdiger Kreklau.

It’s the fantasists who change the world,

not the bean counters.

Playing is experimenting with chance.

It’s the end where I begin.

Some stories are like fish hooks, prickly with lethal barbs that embed themselves ever deeper and more inextricably in the minds of the audience, compelling them to keep
listening. My name for such a tale is
perpetuum morbile,
a narrative with no beginning or end because it tells of death everlasting.

Stories of this kind are sometimes recounted by unscrupulous souls who revel in the look of horror in their listeners’ eyes and the nightmarish visions that will haunt them later on,
leaving them staring up at the ceiling and unable to sleep.

A
perpetuum morbile
can occasionally be found between the covers of a book, in which case it can be avoided by shutting the volume in question. And that’s my advice to you right
now: Don’t read on!

I’ve no idea how you got hold of this story. I only know that it wasn’t meant for you. An account of such horrors should not be allowed to fall into the hands of anyone. Not even
your own worst enemy.

Believe me, I speak from experience. I couldn’t shut my eyes or lay the book aside. Why not? Because the story of a man whose tears oozed down his cheeks like drops of blood – the
story of a man who embraced a contorted lump of human flesh that had breathed and lived and loved only minutes earlier – is no novel or film script. It it not a figment of the
imagination.

It is my destiny.

There is a man in this tale who was forced to realize, just when the agony within his mind reached its peak, that the process of dying had only just begun. And that man is me.

‘Rock a bye baby on the tree top,

when the wind blows the cradle will rock...’

‘
When the bough breaks, the cradle will fall,
and down will come baby, cradle, and all.’

‘Tell her to stop singing that goddamned song at once!’

‘Yes, yes, I know what I’m doing,’ I told the commander of the mobile police unit, via a tiny radio mic that the technician had pinned to my shirt a few minutes earlier.
‘Keep yelling at me like that and I’ll dump the goddamned earpiece, understand?’

I was nearing the middle of the bridge over the A100. The city expressway was eleven metres below us. It had been shut in both directions to safeguard passing motorists, rather than for the sake
of the mentally disturbed woman standing several metres from me.

‘Angélique?’ I called. I knew from the quick briefing I’d received at our temporary command post that she was thirty-seven years old, had twice been convicted of
attempted baby-snatching, and had spent at least seven of the last ten years in a secure mental institution. A month ago, unfortunately, some sympathetic psychologist had decided that, in his
expert opinion, she should be reintegrated into society.

And dropped us in the shit. Thanks a bunch, doctor!

‘I’ll come a bit closer if you don’t mind,’ I said, raising my arms. No reaction. She was leaning against the rusty railing with her arms cradled across her chest. Now
and then she swayed far enough forwards for her elbows to briefly hang over the edge.

I was trembling with cold as well as tension. Although the temperature was surprisingly mild for December, the wind chill made Berlin feel like Yakutsk. Three minutes’ exposure to that icy
blast and my ears were almost falling off.

Gravel crunched beneath my boots. She turned her head and looked at me for the first time. By degrees, as if in slow motion.

‘My name is Alexander Zorbach. I’d like a word with you.’

Because it’s my job. I’m the police negotiator on duty today.

‘Isn’t he lovely?’ she said in the same sing-song voice she’d used for the lullaby.
Rock a bye baby...
‘Isn’t my baby adorable?’

I nodded, although I was too far away to make out what she was clasping to her scrawny chest. It could have been a bolster or a rag doll, but no such luck. Our thermal imaging camera had
confirmed that the thing in her arms was warm and alive. I still couldn’t see it, but I could hear it.

The six-month-old baby was crying. Rather feebly, but crying nonetheless.

That was the good news.

The bad news was, it had only minutes to live.

Even if this mentally deranged creature didn’t throw it off the bridge.

Damn it, Angélique, you picked the wrong baby this time – in every possible way.

I made another attempt to engage her in conversation. ‘What’s the little mite’s name?’ I asked.

A bungled abortion had left her unable to have children. It had also robbed her of her reason. This was the third time she’d taken someone else’s baby and tried to pass it off as her
own, only to be discovered not far from the hospital. Today it had taken only half an hour for the barefooted woman with a whimpering baby to be spotted on the bridge by a motorcycle courier.

‘He doesn’t have a name yet,’ she said. Her self-delusion was so far advanced that she firmly believed the child in her arms to be her own flesh and blood. I knew it was
pointless to try to disabuse her. I certainly wouldn’t achieve in seven minutes what seven years of intensive therapy had failed to do. But that wasn’t what I had in mind.

‘How about “Hans”?’ I suggested. I was now no more than ten metres away.

‘Hans?’ She withdrew one arm from the bundle and folded back the blanket. To my relief, the baby started to cry again. ‘Hans sounds nice,’ she said absently, stepping
back a little. She wasn’t as near the rail now. ‘Like Lucky Hans in the fairy tale.’

‘Yes,’ I said, taking another cautious step towards her.

She turned to me with an enquiring look. ‘What other fairy tale?’

‘The one about the nymph called Undine.’

It was more of a saga than a fairy tale, actually, but that was irrelevant under the circumstances.

‘Undine?’ The corners of her mouth turned down. ‘I don’t know it.’

‘What the hell are you playing at?’ the unit commander bellowed in my right ear. I ignored him.

Eight metres.
I was edging into the penalty area step by step.

‘Undine was a godlike creature, a water nymph more beautiful than any woman alive. She fell hopelessly in love with a knight named Hans.’

The baby responded with a loud cry.

So he’s still breathing. Thank God for that.

‘Yes,’ I went on, ‘but Sir Hans was so handsome that all the women ran after him. Sadly, he fell in love with someone else and left Undine in the lurch.’

I waited until I heard the baby give another cry. ‘Undine’s father, the sea-god Poseidon, was so angry with Hans that he laid a curse on him.’

‘Yes. From then on, Hans could no longer breathe without thinking. He had to concentrate all the time.’

I drew cold air into my lungs and expelled it noisily as I spoke.

My chest rose and fell demonstratively.

‘If he forgot to do this, even for a moment, he would die.’

‘How does the story end?’ Angélique asked suspiciously, when I’d got to within a car’s length of her. She seemed less put out by my proximity than by the turn the
story had taken.

The Counterfeit Tackle by Matt Christopher
The Champagne Queen (The Century Trilogy Book 2) by Petra Durst-Benning
After Effects by Catherine Aird
The Promise of Peace by Carol Umberger
Instant Mom by Nia Vardalos
Binary Cycle - (Part 1: Disruption) by Davies, WJ
I Didn't Do It for You by Michela Wrong
Glory (Book 5) by McManamon, Michael
The Princess and the Pauper by Alexandra Benedict
Dark Dream by Christine Feehan
Our partner