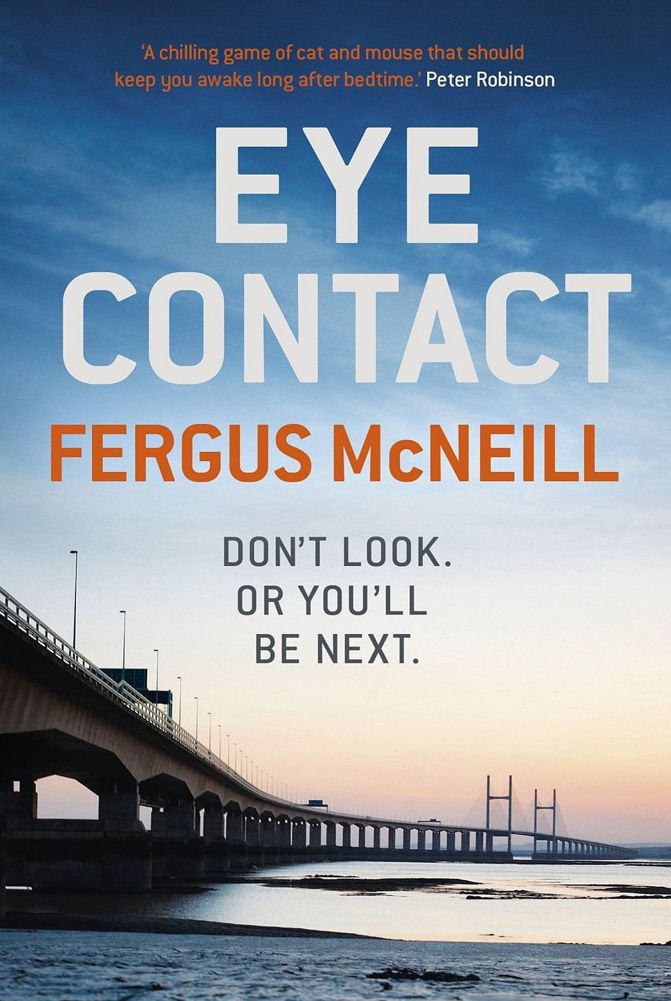 Fergus McNeill has been creating computer games since the early eighties, writing his first interactive fiction titles while still at school. Over the years he has designed, directed and illustrated games for all sorts of systems, including the BBC Micro, the Apple iPad, and almost everything in between. Now running an app development studio, Fergus lives in Hampshire with his wife and teenage son.
Eye Contact
is his first novel.

The right of Fergus McNeill to be identified as the Author of the Work has been asserted by him in accordance with the Copyright, Designs and Patents Act 1988.

He realised very early on that he’d have to set rules. Otherwise, there would be no structure, no real challenge . . . and what would be the point if there was no challenge? He wondered how many others might have walked this road before him, moving unseen through society, their actions sending out little ripples over the surface of the news, while they remained quietly anonymous, hidden in plain sight.

He smiled at the thought. It was certainly harder to do now, so much more challenging than it would have been even twenty years ago – tougher surveillance, tougher forensics – but in many ways that was the appeal of it.

He watched them spreading away into the twilight, glittering with reflected street lamps from across the otherwise calm water. He watched them fading as they expanded outwards, silent rings around the face-down figure, now so still after moments of such struggle. And then, like the last of the ripples, he was gone.

Robert Naysmith peered thoughtfully at the typewritten menu in the window, then pushed open the door with his forearm, the sleeve of his jacket preventing any direct contact with the glass.

A little bell clinked above the doorway as he stepped inside, his polished shoes tapping quietly across the scrubbed wooden floor. Eight tables, neatly squeezed in, with linen tablecloths and flowers in slender vases, artistic photographs on the walls. But only one customer – an owlish old man lost in his newspaper, a half-empty mug at his elbow.

Naysmith walked over to the counter, his eyes on the woman with her back to him, studying the shape of her – those narrow shoulders, the straight brown hair – then calmly switched his gaze to the menu board as she started to turn round.

She had a soft voice, warm, with a slight West Country lilt. He allowed his eyes to drift back from the menu, as though he hadn’t been watching her before, his smile mirroring hers.

‘Are you still serving breakfast?’ he asked.

She glanced up at the wall clock, then looked back to him with a slight shake of her head.

‘I understand,’ Naysmith sympathised. ‘I wouldn’t want you to get into trouble . . .’

He held her gaze, a hint of mischief in his unblinking eyes, until she smiled again and looked away.

‘Well,’ she admitted, pushing an errant strand of hair away from her face, ‘it’s not as though we’re busy. What was it you wanted?’

Naysmith turned to the menu board.

‘I think we can do that for you.’ She called the order through to the kitchen.

She turned and picked up an empty mug, while Naysmith reached for his wallet. She was wearing a blue sweater – plain, but just tight enough to show that she had a pleasing figure. Very little make-up, but that sort of sleepy beauty he’d always found rather appealing.

‘So is this your place?’ he asked. ‘Or are you a rebel employee who serves breakfast whenever the mood takes you?’

The woman laughed as she placed the mug under the coffee machine.

‘A bit of both,’ she replied. ‘I run it with my sister, so I suppose I can do whatever I like.’

‘Must be nice to be your own boss.’

She placed his coffee on the counter and took the money he offered.

‘Sometimes,’ she nodded as she turned to the till. ‘You get to meet some nice people.’

Naysmith smiled at her as she handed him his change.

‘Thanks.’ He remained at the counter, inhaling the steam rising from his coffee.

‘And you?’ the woman asked him after a moment. She had a wonderfully shy expression.

‘I’m just one of those nice people,’ he lied.

Naysmith had always liked Clifton. It was quite beautiful in parts, especially up near the suspension bridge. Leafy streets with grand old houses, narrow lanes that fell away down steep inclines, boutiques and cafés and the well-dressed people who frequented them. So different from the rest of Bristol – a little island of calm, looking out across the hazy urban sea below.

He stopped by a second-hand bookshop, smiling as he studied the sign taped to the door:
Back in 10 mins
. The ink was faded and some of the tape looked older – the shopkeeper was obviously out a lot – but somehow that made the place even more charming. Yellowing paperbacks were stacked high in the window, larger volumes propped up against them in a precariously balanced display. He thought about coming back to browse and checked his watch – quarter to twelve. The Merentha Group meeting wasn’t until three. Plenty of time if he did decide to return this way.

The smell of warm bread came to him from a bakery across the road but he continued up the hill, enjoying the sunshine and shop windows, happy to see where his feet would take him.

At first, it was just a flicker of an idea, a nagging feeling that he couldn’t quite recognise, but it grew stronger in his mind as he walked.

It had been months since his work had taken him to Bristol, and even longer since he’d been up here. There was something about this part of the city that drew him, and some good memories from a couple of summers back when he’d chanced to meet a particularly interesting woman in a tiny private gallery. They’d discovered a shared dislike for modernist sculpture – she’d joked that even bad art could bring people together. Absently, he wondered if she still lived in that same flat, the bedroom windows overlooking the Downs, but then quickly dismissed the idea.

That wasn’t the sort of encounter he was thinking about.

It had certainly been a while. And coming here today on business might be the perfect opportunity to find a new challenge. To find someone new.

He stopped outside an antiques shop, his gaze wandering across the tarnished medals, dusty uniforms and other militaria that would normally fascinate him. But not today. Instead he found himself staring at the reflection of the street behind him. The people walking by, unaware of his presence in their midst, or his scrutiny. It could be any one of them . . .

His own reflection smiled back at him – late thirties, tall and slim, well groomed, with short dark hair that showed no sign of thinning. Searching dark eyes surveyed his jacket and shirt, stylishly casual as befitted a successful sales director, but smart.

He realised now that he had been trying to distract himself all morning, but the restless excitement was growing, the sense of inevitability.

Wandering on in the direction of Clifton Down, he savoured that curious mix of anticipation and regret that always seemed to stir in him at this moment. A familiar feeling now.

He checked his watch again. Five to twelve. There was really no sense putting it off any longer. He’d already made the decision – had made it years ago – and he felt the cold thrill stirring in his stomach as he prepared himself to begin.

The park lay in front of him. He would walk across it; all the way across. The first person to make eye contact after twelve o’clock would be the one.

He bowed his head for a moment, took a breath to calm himself and clear his thoughts, then set off.

It was a bright day, and the high, open parkland of Clifton Down stretched out around him, a swathe of green beneath a vast blue sky. Newly cut grass filled the air with a wonderful, fresh smell. The edges of the straight tarmac path were dotted with benches, all occupied, and the warm weather had even tempted people to sit out beneath the trees, though it was still quite early for lunch. He smiled again. What a glorious day for it.

A dour little man on one of the benches glanced up at him as he passed, a mean-spirited face scowling behind a tightly held sandwich, clearly unhappy at the thought of sharing anything, especially his seat. Naysmith checked his watch – 11.58. A pity, but it encouraged him to think that he might find someone suitable, someone
deserving
. He walked on.

This was always such an exciting part of the game. So much of it was down to skill and strategy, but here, at the outset, he would give up the control and surrender himself to fate. It could be anyone, and therein lay the real challenge.

This was the random factor that made the game real, that made the skill and the strategy meaningful. There were rules, of course – the twenty-four-hour head start, only pursuing one target at a time, and so on – all carefully considered to make the whole thing more interesting. But without a genuine element of chance what would be the point in playing?

Somewhere in the distance, a church bell was chiming.