Read Eyes of the Sun Online

Eyes of the Sun 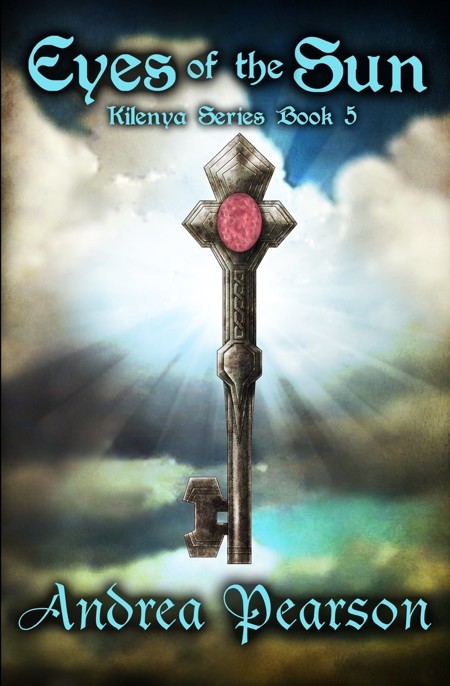 Chapter Five: The Other Key

The Key of Kilenya: Special Edition with Illustrations

Grail Bestiary Volume I: Creatures of Grail and Kilenya

Praxis Bundle One: The Focus, The Manor, The Angel

For information on the above books, click
here
. (http://www.andreapearsonbooks.com/p/my-books.html)

This ebook is licensed for your personal enjoyment only. This ebook may not be re-sold or given away to other people. If you would like to share this book with another person, please purchase an additional copy for each recipient. If you’re reading this book and did not purchase it, or it was not purchased for your use only, then please return it to Kindle.com and purchase your own copy. Thank you for respecting the hard work of this author.

This is a work of fiction, and the views expressed herein are the sole responsibility of the author. Likewise, characters, places, and incidents are either the product of the author’s imagination or are represented fictitiously, and any resemblance to actual persons, living or dead, or actual events or locales, is entirely coincidental.

Summary
: In this, the fifth installment of the Kilenya Series, Jacob Clark masters his last magical ability to harness energy from the sun, which leads him to the location of the Key of Ayunli. Unfortunately, the Lorkon learn where it is, too, and they race to see who will get to it first. But complications rise as Jacob and his friends are tasked to release Lasia, the Fire Pulser, while Azuriah declares that they must rid the land of Gevkan from Lirone, the sky-dwelling monster.

With so many important and dangerous tasks, Jacob is forced to increase the boundaries of his Shiengol abilities before the Lorkon army arrives. He feels the possibility of failure mounting, knowing that without him, those he loves will suffer or even die. Can he buy more time, or will he be forced to face Keitus and the other Lorkon before he’s ready?

For being the best, most enthusiastic readers ever.

Jacob knew he was supposed to be listening to Azuriah. Not only was the guy his uncle, but he was also a Shiengol and one of the most powerful men Jacob had ever met.
Jacob
was part Shiengol, but he still had a lot to learn.

He couldn’t keep his mind from wandering, though. Only a month had passed since he’d been released from the hospital, and his insides still hurt. That was to be expected after getting stuck in the past, having poisonous blood injected into him, and then suffering from internal injuries that had to be corrected by several surgeries.

At least he’d figured out how Keitus, the Lorkon king, had become a Lorkon. Jacob shuddered, thinking about that concoction of diseased blood his grandfather, formerly Ramantus, had
willingly
put inside his body and those of Jacob’s two uncles. And, of course, Jacob’s body too. It was disgusting and very dangerous. No wonder there had been so many casualties from the tests.

“Jacob!” Azuriah shouted, making him start. “If I catch you gazing into the flowers one more time, I’ll send you home.”

Jacob tried not to roll his eyes. He’d been gazing at the trees, not the flowers. But he wasn’t about to tell Azuriah that. “I’m having a hard time concentrating.”

“That doesn’t even make sense. Paying attention is difficult right now, but if I did it, I wouldn’t have a hard time concentrating?”

Azuriah folded his arms and glared at Jacob. “Stop arguing with me.”

Jacob folded his arms too. “Fine. But I still think you’re joking.”

Jacob threw his arms down in exasperation. “About what you want me to do!”

“Would I joke?” Azuriah’s long brown hair caught the late-spring breeze and whirled across his face. The Shiengol whipped it back, his gaze not leaving Jacob’s.

They’d gone up in the hills behind Azuriah’s fortress where they could practice uninterrupted. Jacob had been annoyed the whole way—he’d protested that he wasn’t ready for that much physical exertion yet, but Azuriah had insisted.

Jacob snorted. “No.” He put his earlier thoughts away and squinted up at the sun, then quickly away. “Seriously, though. You want me to stare at it for ten seconds?”

“Yes, that’s the first step. And if you’d been listening, you would know that the next step is to picture in your mind the person or thing you want to follow through time, and they’ll light up like a golden beacon.”

“You know, they tell us never to look at the sun—it’ll damage our eyes.”

Azuriah flicked a leaf off his robes. “Jacob, you’re not a normal human. If you were, doing this would be incredibly stupid and dangerous. But since you’re part Shiengol, it is not.”

Jacob still hesitated. “You’re sure of this?”

Azuriah narrowed his eyes at Jacob again, his eyebrow raised. “Are you really questioning me?”

Jacob lowered his gaze for a moment, then remembered that wasn’t how a prince was supposed to act. He met Azuriah’s stare without blinking. “Yes.”

Jacob grunted. “Whatever. If I’m blinded for life, I’m totally taking you to court.”

Jacob took several deep breaths. His great-great-uncle had been confident and then proven wrong about things before. But Jacob knew he wouldn’t be able to continue with his lessons until he at least tried, regardless of the risks. And Azuriah had been on target more often than not. That counted for something, right?

Finally, realizing he’d hesitated long enough, Jacob looked up at the sky, slowly bringing his gaze closer and closer to the sun.

When he locked on the brilliant orb, the familiar tingling in his nose and the burning in his eyes forced him to look away.

“It will until your eyes open and accept the light. Do it again. Now.”

Jacob waited a moment, watching the trees, mentally cheering himself on. He could do this. He really could. It wasn’t anywhere near as difficult as going back in the past to face his most dangerous enemy. He bit his lip, then looked and forced himself not to glance away this time. He wiped a couple of tears off his cheeks, still staring at the sun.

“Excellent. Two more seconds. Ah, your eyes are starting to glow. Very good. Now look away and picture whom you want to follow. King Ramantus, was it?”

Jacob nodded, resisting the urge to wipe away more tears that coursed down his cheeks. He Time-Saw to Troosinal.

Finding King Ramantus didn’t take long, and even though Jacob mostly knew what to expect, he still jumped when the elderly man started glowing a brilliant gold.

He pulled away from the vision somewhat, allowing himself to See the entire city. He made his vision slowly reverse, testing Azuriah’s theory. His eyes didn’t lose their target, so he sped backward by several years. A smile spread across his face as everything around the king became a blur, while that golden beacon that represented the king was still very easy to find.

Jacob returned to Azuriah. “It worked!”

“Did you think it wouldn’t?”

Azuriah shook his head. “Will you never trust me?”

Jacob shrugged and was about to respond, but Azuriah held up his hand.

Jacob hesitated when he heard a faint roar from farther up the mountain. “What was that?” The hairs on the back of his neck prickled.

Jacob tilted his head. “You’re sure?”

“Of course. And while you’re practicing, figure out where Keitus came from.”

Jacob nodded, looked at the sun again, then Time-Saw. Once more, finding Ramantus wasn’t difficult, and as soon as the king lit up like gold, Jacob put his ability on the fastest speed he could handle. Time flew by. After sixty uneventful years, he realized the king hadn’t lived a very exciting life. Ramantus didn’t even physically change during that time. He was forever a ninety-year-old man.

Jacob continued speeding backward through time, watching Ramantus live his life in reverse. Apparently, he hadn’t always been royalty. Before moving to Troosinal, he’d been employed for several years as a city dignitary in some small village. Because of this, Jacob was positive the man had done something immoral to get into the position of king.

Finally, about a hundred years before becoming a dignitary, the man changed drastically in appearance—becoming younger and younger abnormally fast until he was in his mid-thirties, and then a boy.

Jacob paused to think over what he’d just learned. Was Ramantus even fully human? How was it possible that he aged to ninety in a very short period, and then stayed at ninety for over one hundred years?

Jacob tilted his head. Did someone just call his name? Did Ramantus know he was watching? No—that couldn’t be it. Who, then? Maybe Azuriah? Was the Shiengol trying to get his attention?

He returned to the present in time to see Azuriah dancing around him, pole in hands, hair flipping. Jacob ducked, barely missed getting hit, and nearly flopped to the ground. But then he saw what had been roaring earlier.

Bears. And he and Azuriah were surrounded by at least twenty.

He yelped. Where had the creatures come from? While Azuriah spun around a second time, Jacob noticed the human hands the animals sported. They were Rogs, not bears. It had been a long time since Jacob had seen or heard about any of them.

“What can I do to help?” he shouted at Azuriah.

“And leave you here?”

Azuriah took off then, sprinting through the trees, jumping over logs and dead bushes.

Whoa. He was serious. Suddenly aware of the danger he was in, Jacob scrambled to catch up with the Shiengol. Rogs might not have claws, but they weighed several hundred pounds and had massive shoulders. They’d be able to inflict plenty of damage simply by hitting or knocking someone over.

Jacob heard the Rogs chase after him. His heart started beating like crazy—pounding rhythmically—and he clutched his side, hoping none of his healing injuries would open up again. Would he be able to outrun the beasts? Fear made his legs go faster than he thought possible, but still, he didn’t catch up with Azuriah. Soon, he couldn’t even see the Shiengol.

For their practice session, they’d gone really far up into the mountains. Could Jacob even find his way back without Azuriah’s help?

A Quiet Adjustment by Benjamin Markovits
Tess Awakening by Andres Mann
Confessions of the Sullivan Sisters by Natalie Standiford
Fireworks in the Rain by Steven Brust
The Secret Art of Forgiveness by Louisa George
The Short Cut by Gregory, Jackson
The Chorister at the Abbey by Lis Howell
District: Surviving the Zombie Apocalypse by Shawn Chesser
When Love's Gone Country (Sequel two of the Embracing Love Trilogy) by Hiatt, Merri
Rocky Mountain Match by Pamela Nissen
Our partner