Read Eyes to the Soul Online

Eyes to the Soul 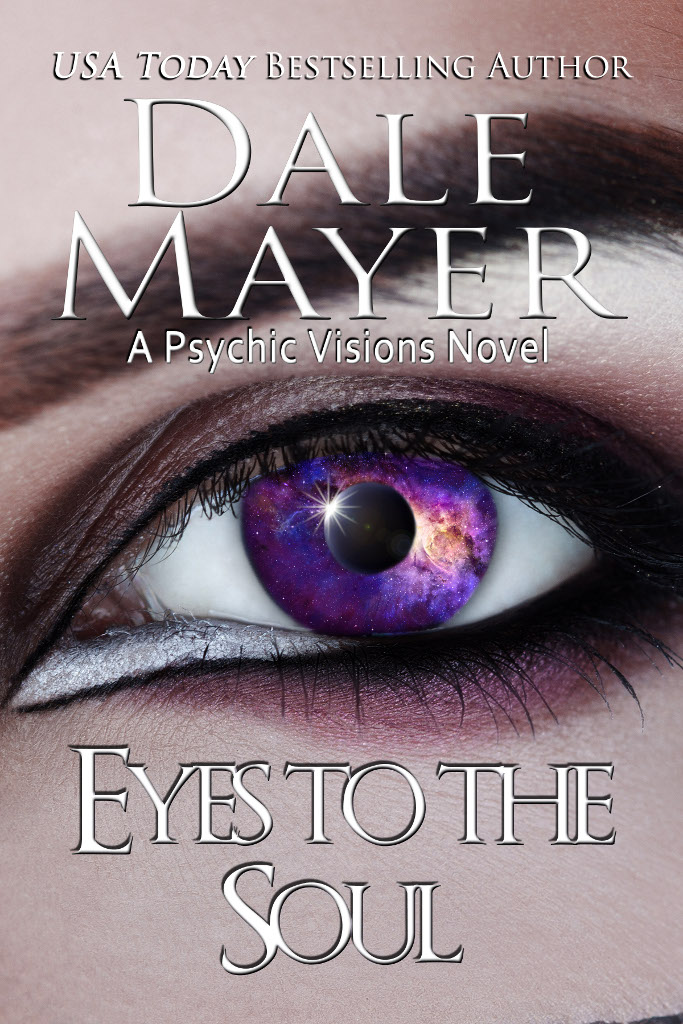 Eyes to the Soul

EYES TO THE SOUL

All rights reserved. Except for use in any review, the reproduction or utilization of this work in whole or in part by any electronic, mechanical or other means, now known or hereafter invented, including xerography, photocopying and recording, or in any information storage or retrieval system, is forbidden without the written permission of the publisher.

This is a work of fiction. Names, characters, places, brands, media, and incidents are either the product of the author’s imagination or are used fictitiously. Any resemblance to actual events, locales, or persons, living or dead, is entirely coincidental.

I love to read Dale Mayer’s books… keeps me guessing…. I am getting good though trying to figure out who did it…. I am on my fourth book….

Dale Mayer’s work is always outstanding and Haunted by Death is no exception.

…Review from Haunted by Death, book 2 of the By Death Series

This is a GREAT series that you don’t want to miss out on!

…Review from Dangerous Designs, book 1 of the Design Series

Dale Mayer is a gifted writer who now has me hooked as a new fan. She characters are complex and she shares her knowledge of energy work clearly and simply. Makes for fascinating reading…

Wow! I read a lot, and I can honestly say that there a few books that I have read that I will remember for years. This is one of those books. Thank you Dale for giving me the gift of this magnificent story. It was both heartbreaking and hopeful at the same time.

…Review left on Skin, book 1 of Broken and yet…Healing Series

Touched by Death is an outstanding novel by Dale Mayer. Unlike her usual novels that contain paranormal activity, this novel is sheer malevolent actions from ordinary humans.

…Review left on Touched by Death, book 1 of By Death Series

Dale’s books are spellbinding in more ways than one. She has a unique way with words. Her characters are fun and funny and loving. I love the way the story flows. Her characters all have personality. She takes you from suspense to love, then fear love and eternal love.

Excerpt from Now You See Her

No.
Celina Wilton shook her head, then immediately stopped. He couldn’t see her. And no movement was going to stop the voice in her head. The cruel, cunning voice of a predator. One who’d found his prey. And like most predators, he loved to torment his victim.

It was unthinkable. She – a ghost-whisperer of today – herself now haunted in the very worst of ways.

No.
She refused to give him what he wanted.

I won’t go away. You know that.

And I won’t let you see. No matter how long it takes.

Soft, mocking laughter filled Celina’s head. She trembled. Who was this evil soul? Why was he doing this? She’d asked, but he hadn’t yet answered. He had something else on his mind. Plans. She desperately wanted to know what they were, but didn’t dare give him the satisfaction.

It will take forever…and I have more time than you.

Not if I have anything to say about this.
But did she?

She hoped so. But she hadn’t found a way to change the situation yet. She needed someone to help her. Only there wasn’t anyone in this world that could. She’d been caught in a web of her own making, thinking she knew what she was doing – until this evil found her. And taught her a major lesson – that she really knew nothing. That being able to see a ghost or two did not make her a pro. That she was an innocent in a world she thought was safe and easy, only to find predators lurking in the shadows. It was a sign of her own naiveté that she hadn’t known predators
could
exist in this ghost world.

She wished she could turn back time to when she’d seen her first ghost and ignore him. If only she’d treated him as the fantasy figure her friends had all said he’d been.

Except then she’d have missed communicating with Caslo, her childhood friend. Her dead best friend.

She felt so alone.

Right now she was surrounded by people as the orchestra broke up for the last practice before the new show opened. Chairs were shuffled back and cases opened, voices raised in laughter.

Celina waited for the noise to die down.

“Celina, are you coming out for a drink?” Jacob Coburn, friend extraordinaire, asked from beside her.

“I was thinking that an evening at home would be better. I could use a good night’s sleep before the big performance.” She reached for her purse behind her chair and double checked the clasp, her hands sound and sure. She’d been living without her eyesight for so long that this was normal. Natural. She stopped just short of thinking
comfortable
. There was nothing comfy about this.

There also wasn’t anything natural about people’s responses to finding out she was blind, the pity in their voices.

She was blind. Not deaf, regardless of the often hushed whispers, nor dumb, even though many friends instinctively jumped up to answer for her. Being used to others’ behavior didn’t make it easier.

And Celina hated being called disabled or
worse
– differently abled. That was not her. Would never be her. Her condition was a stumbling block on the pathway of life and for – her – a handicap. She was handicapped regardless of politically correct terms. Besides, she wasn’t
completely
blind.

She could see shadows sometimes, but not always and only if she strained her eyes.

“Come on. One drink won’t make a difference, surely.” He hesitated then added, “Besides, I want you to meet a friend of mine. He’s planning on joining us.”

She paused, closing her violin case before choosing her words carefully. “Where are you going?”

She stilled. Why there? It had to be a coincidence. They couldn’t know. She didn’t dare tell them. Their sympathy would be more than she could stand.

“I’ll drive you home afterwards. Just one drink to celebrate all of our hard work,” he said in a coaxing tone.

She could hear the smile in his voice. Jacob knew her too well. Knew how to get her cooperation.

“Opening night is tomorrow, and after that we won’t have a chance for weeks,” he said. “We’ve got this. But it took tons of effort – team effort – and the team wants to celebrate…”

“And I’m part of the team,” she finished for him. There was no arguing the logic. And one drink wouldn’t hurt her. In fact, it might just ease her tension for the coming night. Then again, all nights were tough these days. But why Chico’s? Any place but there.

As if hearing her thoughts Jacob added, “Chico is putting on a special deal for us. He’s expecting us.”

Crap. Of course he was. That old man was generous to a fault.

“Fine. One drink,” she said, giving in with a gentle smile.

Bruce walked past, clanging metal to metal. “A big drink then, if it’s only one.” More metal clanged, letting her know he was busy collecting the music stands to carry off to one side. Bruce played the drums and could have played with the best rock bands in the world, but the classics had stolen his heart.

“I’ll be done here in a moment. Mind if I catch a ride with you two?” Bruce asked, his voice fading slightly as he walked away. “I’ll take a cab home afterward.”

“Sure thing,” Jacob said to Bruce, and to Celina, “I’ll go lock up your harp.”

“Thanks.” Chico’s? Well if she had to… she could do this, like she’d done so much before. With a deep breath, she put on her sweater, grabbed her purse, walking stick and stood. Bruce snagged the chair as she left it. “Don’t sit back down. There’s no chair any longer.”

“As always.” She smiled. “You’re always stealing the chair out from under me.”

“I wait for you to stand,” he protested, but the smile in his voice was that of a young boy playing tricks. Still his words reminded her that he was always careful to tell her when he took her chair.

“Complain, complain, complain. Good thing you’re so beautiful, with alabaster skin, that jet black hair. And those eyes…” He gave an exaggerated swooning sigh then added, “Not to mention having a voice like an angel, otherwise we might not put up with you.” Bruce walked back toward her, his shoes echoing in the almost empty hall. He laughed. “Who am I kidding? With just one of those qualities we’d still be hanging around like smitten puppies.”

Celina snickered. “As if. You all have the women sniffing around you now. There’s a different woman in your bed every night. Just because I’m blind doesn’t mean I can’t see.”

“How the hell you do that I don’t know.” Jacob protested, his voice moving closer to them. At her side again, he added, “Besides,
I
don’t have a different woman in my bed.”

Celina leaned closer and whispered, “That’s because it’s a different guy instead.”

Jacob gasped, an embarrassed pause filling the air. He whispered in a shocked voice, “How the hell would you know?”

Wings of Creation by Brenda Cooper
The Echoing Grove by Rosamond Lehmann
Department 57: Rubies of Fire by Lynne Connolly
An Invitation to Sin by Suzanne Enoch
Queen of the Depths by Byers, Richard Lee
Strangers in the Night by Flex, Raymond S
A Brazen Lady And The Shunned Duke (Faces of Love Series #3) by Jessie Bennett
Robin Lee Hatcher by Promised to Me
My Mate's Embrace by Block, Caryn Moya
What About Charlie? by Haley Michelle Howard
Our partner