Read Faces of the Gone: A Mystery Online

Faces of the Gone: A Mystery 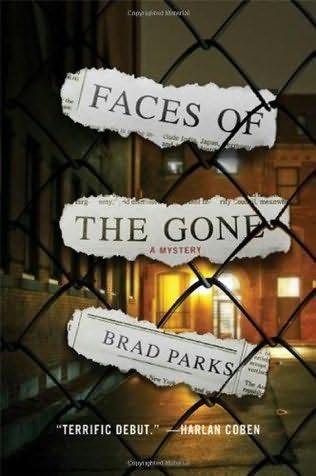 I had the great fortune to meet the love of my life when I was nineteen and she has since become more to me than I possibly have space to recite. So I will keep this brief: Thank you, Melissa, for being my everything.

This page intentionally left blank
With all the vacant lots in Newark, New Jersey—and there were thousands of them—the Director could afford to be picky.

He wanted one near public housing, a red herring for police, who always began their search for suspects in the projects. It had to be dark at night, lest any random passers-by had inquisitive eyes. But it also needed to be in plain sight once day broke. The sooner the bodies were discovered, the sooner the Director’s message could be delivered.

After a brief but diligent search, the Director found the ideal vacant lot on Ludlow Street, in a forgotten South Ward neighborhood. There were projects in every direction, including some of the city’s most notorious. The streetlights had been shot out, so there was no worrying about late-night voyeurs. And—this was perfect—it was next to a church. The shock value would be priceless.

With his second in command, Monty, the Director rounded up the four dealers. They came to their designated places as instructed, thinking they were simply collecting their weekly shipment. They loaded themselves in the back of the van and put on their blindfolds, all part of their training. Then they traveled in silence toward the vacant lot, because the Director ordered them not to speak.

At their destination, the Director guided the still-blindfolded dealers to the rear of the vacant lot and made them form a line. He told them it was new training, instructing them not to be alarmed if they heard gunfire.

Then he shot each one in the back of the head.
There had been no witnesses. No one could see them through all that unlit gloom. There were no shell casings left behind—the Director collected those before they hit the ground. He didn’t even have blood on his gloves. The job was that clean.
As soon as the last body dropped, the Director gave Monty a digital camera and ordered him to take close-ups of each dead face. Monty balked at first. He worried about the flash attracting attention. But the Director reminded him it was an essential part of the plan.
Because punishing the four dealers—all of whom had strayed and broken a vital clause in their contract—wasn’t enough. It had to be made clear to the others in the or ga niza tion, especially those who might consider straying themselves, that this was the price for disobedience.
Thank goodness, the Director chuckled to himself, the news media would seize on this sensational story and help deliver his message. He couldn’t have bought better advertising.

If there had only been one dead body that day, I never would have heard about it. From a news standpoint, one dead body in Newark, New Jersey, is only slightly more interesting than planes landing safely at the airport. Assuming it’s some anonymous gangbanger—and in Newark it’s almost always an anonymous gangbanger—it’s a four- paragraph story written by an intern whose primary concern is finishing quickly so he can return to inventing witty status updates on Facebook.

Two bodies is slightly more interesting. The intern has to come up with eight paragraphs, and maybe, if there’s someone unfortunate enough to be hanging out in the photo department when an editor wanders by, a picture will run with the story. Three bodies is worth a headline
and
a picture, even a follow-up or two, though the interest peters out quickly enough.

But four? Four means real news. Four gets a town buzzing, even a town as blood-jaded as Newark. And four bodies is what I was contemplating that Monday morning in early December as I arrived at the offices of the
Newark Eagle-Examiner
and opened up the paper.

We had managed to cram a quick story about it in our late edition. It was done by our night-shift rewrite guy, a man named Peterson who delighted in hyperbolizing gritty crime stories. He quoted a Newark police spokesman as saying four victims, each with a single bullet wound in the back of the head, had been found in a vacant lot next to a church on Ludlow Street.

The police spokesman didn’t provide much color, so Peterson created his own, describing the “brazen execution-style slayings” as having “rocked an otherwise quiet Newark neighborhood.” The bodies, he wrote, had been “stacked like cordwood in a weed-choked plot.” The Newark police had not released the  names of the victims, because next of kin had not been notified, so Peterson referred to them as “four John Does” every chance he got.

I was making it through the last of Peterson’s compositional flourishes when I heard my editor, Sal Szanto.
“Crrttrr Rssss,” Szanto growled. From experience, I knew he was at least attempting to say my name, Carter Ross.
“What’s going on, boss?” I said, lurking in his doorway.
Now in his early fifties, Szanto often had trouble with vowels until his voice warmed up a bit. No one could say which of his vices—coffee, cigarettes, or antacid tablets—had taken the letters away.
“Ssttddnn.”
Sit down. I think. As I entered the office and took the chair across from his desk, Szanto turned away and held up his left hand while coughing forcefully into his right, his jowls jiggling at the effort. He stopped for moment, started to speak, then hacked a few more times until he finally dislodged the morning phlegm that had rendered him all but unintelligible.
“Ah, that’s better,” he said. “Anyway, Brodie is really pitching a tent over this Ludlow Street thing.”
As far as anyone knew, Harold Brodie—the legendary
Eagle- Examiner
executive editor who was now pushing seventy—had not gotten an actual hard-on in years. He got stiffies for stories and, sadly for Mrs. Brodie, nothing else. And although they were erections only in the figurative sense, the impact they had on the rest of us was very real. When you heard the phrase “Brodie has a real hard-on for this one”—or any number of colorful derivations on that theme—you knew it was trouble. Once he was turned on to a story it could take days for the old man to tire of it. And, in the meantime, he was going to harass everyone in the newsroom on a half-hourly basis until he got the story he imagined existed.
“I’ve already sent Whitlow and Hays down there. They’re going to do the daily stuff,” Szanto said, then aimed a stubby finger at me. “You’re going to get to the bottom of what the hell happened down there.”
“And how am I going to do that?”
“I don’t know. You’re my investigative reporter. Figure it out yourself.”
I enjoy the title “investigative reporter” because it impresses women in bars. And I was proud to have earned the job at an age, thirty-one, when some of my peers were still slaving away on backwater municipal beats in faraway bureaus. But it’s just a line on a business card. It’s not like there are files marked “for investigative reporters only.” It certainly hasn’t made me any smarter.
“So what do we know, besides ‘four John Does stacked like cordwood in a weed-choked plot’?” I said, mimicking Peterson’s style.
“That one of the John Does is actually a Jane.”
“Whoops.”
“Yeah,” Szanto said, wincing as he sipped his still-too-hot coffee. “The police already called to bitch about that this morning.”
“So what do you think Brodie wants from this?” I asked.
“You know exactly what he wants: a fascinating story with great art that gives us all piercing insight into the woes of New Jersey’s largest city. And he wants it tomorrow.”
“How about you give me a week and I’ll try to turn in something that doesn’t read like it was written by a lumberjack?”
“Hey, if it gets Brodie off my ass, you can rewrite
Tuesdays with Morrie
for all I care,” Szanto said.
“Yeah, maybe I’ll do that,” I said as I departed his office.
“Tk Hrrrndzzz,” Szanto hollered after me.
“Hear that?” I asked Tommy Hernandez, the aforementioned Facebook-obsessed intern.
“Yeah, it sounds like a lawnmower that won’t start,” he said, then looked at me with something far beyond disdain.
“How many times do I have to tell you that a wristwatch is an accessory and it should match your belt?” he demanded.
Tommy is only twenty-two, but he’s blessed with a great reporter’s instinct of noticing every small detail. He’s handy to have on the streets, because he’s second-generation CubanAmerican and speaks flawless Spanish. He’s also gay as the Mardi Gras parade.
“Come on, Tommy,” I said. “Let’s go embrace another beautiful day in Newark.”

he abandoned lot on Ludlow Street was, true to Peterson’s imagination, a sorrowful little patch of earth covered in dried weeds. The neighborhood around it wasn’t bad, by Newark standards. Most of the houses appeared to be owner occupied and decently maintained, with either newish siding or fresh paint. The church, St. Mary’s Catholic, was a century-old stone building with a tidy rectory next door. There was public housing across the street, but they were newly constructed town houses, the kind that wouldn’t go to seed for at least another de cade. Weequahic Golf Course, a charming little cow pasture county residents could play for fifteen bucks, was maybe two blocks down the street.

His Road Home by Anna Richland
Pleasure Party by DeRosa, Nina
Dirty Wings by Sarah McCarry
A Death in Two Parts by Jane Aiken Hodge
The 2084 Precept by Anthony D. Thompson
A Baby For The Millionaire (The Full Series) by Helen Cooper
Quintessence Sky by David Walton
Elysium. Part One. by Kelvin James Roper
Eden's Eyes by Sean Costello
Threepersons Hunt by Brian Garfield
Our partner