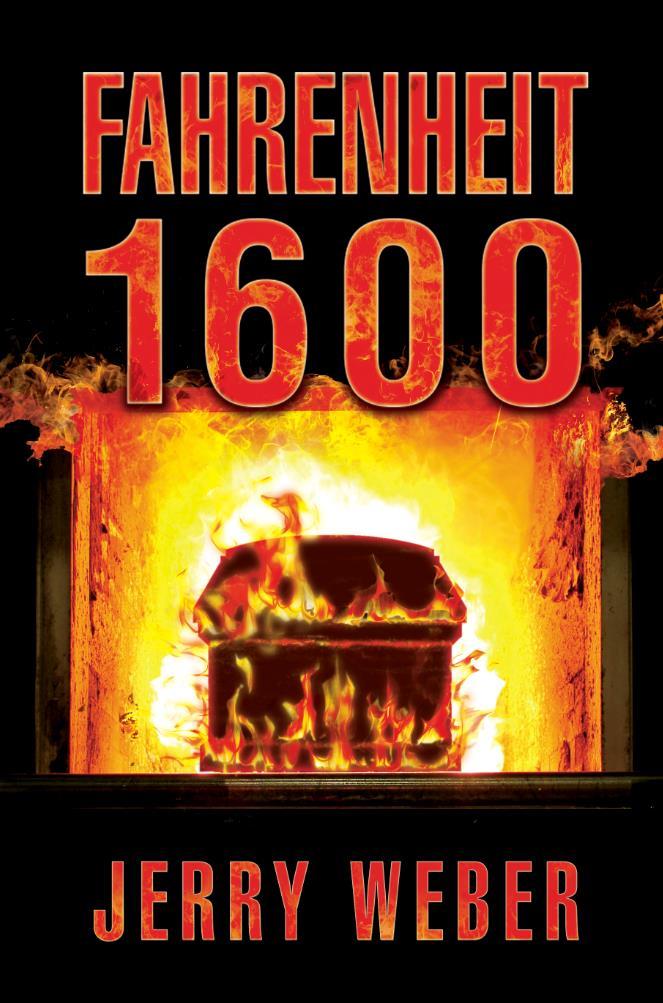 No part of this publication may be reproduced, stored in a
retrieval system, or transmitted in any way by any means—electronic,
mechanical, photocopy, recording, or otherwise—without the prior permission of
the copyright holder, except as provided by USA copyright law.

Disclaimer:
This is a work of fiction. Names,
characters, businesses, places, events and incidents are either the products of
the author’s imagination or used in a fictitious manner. Any resemblance to
real persons, living or dead is purely coincidental with the exception of a few
famous individuals and locations mentioned briefly. Celebrities or locations
mentioned in this work do not represent endorsements by them, their heirs, or
any business mentioned in this work of fiction.

To my wife, Cynthia. Thank you for not allowing
Fahrenheit 1600 to be relegated to the dust bin.

Chapter 12 A Call to Action

Chapter 15 Throwing Out the Bait

Chapter 16 Going for the Close

Chapter 20 Under the Spell of the
Mob

Chapter 24 Success in a Business

Chapter 42 Clouds on the Horizon

Wilkes-Barre, PA. circa 1984, is a small city
situated on the banks of the Susquehanna River in the northeast Pennsylvania
anthracite coal region. Three blocks south of the business district, South
Franklin Street is a peaceful street in a residential neighborhood. The large
Victorian homes that line this bucolic street speak of a bygone era when coal
barons, professionals, and business people inhabited the neighborhood.

Depending on whom you asked, the city’s name was
pronounced as either “bear” or “berry”—even by the locals. In any event, Wilkes
University had been slowly buying up the properties in a several square block
area with plans to expand since the 1940s.

Just south of the University’s main campus, the two
hundred block of South Franklin Street has had several of its larger buildings
converted into college dormitories. Many of the remaining old mansions have
long since been turned into apartment buildings. This urban campus became an
island of prosperity in a post industrial town that has, like most American
cities, seen significant change.

Sophie Lunitis is the owner of one of these Franklin
Street buildings, a quadplex brick structure built around 1900. Sophie and her
husband Joseph purchased the building thirty years before as a place to live
and provide an income. They had the old mansion divided into four apartments;
theirs was on the first floor and there were three for rent.

After retiring and living together for twenty years,
Joseph died from a heart attack. This left Sophie to carry on alone—they had no
children. For the first two decades, many from the Lithuanian community, along
with the ethnic Poles and Italians and others who once worked the coal mines
and later retired, lived in Sophie’s building. But in the last ten years, many
of her tenants either died or moved on.

The only real opportunities to rent for a good price
came from Wilkes University students. Sophie didn’t like most of the students.
She came from another generation; one might even say another world. Hers was an
era using last names and shaking hands and of ladies who wore hats and gloves.

Her ethnic background also meant that Sophie was,
well, one might say she was the first environmentalist. Sophie treated just
about everything, including tap water, like a scarce resource that could run
out at any moment if not carefully rationed. Perhaps it was some ancestral
memory from Eastern Europe, where the difference between making it through the
winter and starving to death was this ability to see the value in every scrap
of cloth and crumb of bread.

As a consequence, Sophie had something of a hoarding
tendency. There were those old flannel shirts she meant to cut up into rags and
Danish butter cookie tins she was going to sort her button collection into, but
she did have the lowest electricity bill on the block—perhaps even the state.

The way her new tenants, a generation of spoiled
kids who thought “money grew on trees” (a favorite expression of Sophie’s),
wasted resources drove Sophie into apoplectic fits. She was not above pounding
furiously on the door to the apartment above her if she heard a shower running
for too long. This often led some of the young women to shriek that she had no
right to invade their privacy. Undaunted, Sophie would inevitably retort that
they had “No right to waste good water someone else might need.”

“I’m pretty sure there’s enough to go around.” one
tenant had responded, her voice dripping with sarcasm as she looked at the
little old woman with something like pity.

“Is that so? Well, I’m not so sure you’re the best
person to judge. What is it you study, basket weaving?”

“Well, you’re not a civil engineer or geologist, that’s
for sure, and if you do manage to use up all the water around here, you’ll have
a hard time dyeing your hair that trashy color or washing all that makeup off
your face, so you might want to go easy on things.” Indeed, the young woman had
blue eyeliner streaming from one eye and her hair was an unnatural yellow.

Sophie had turned and marched down the stairs to her
apartment after this altercation, feeling vindicated and happy for the
opportunity to educate the next generation in the ways of this world.

The young woman, on the other hand, had called half
a dozen friends to recount her unprovoked abuse at the hands of her landlady
(with several dramatic embellishments), lost hours of sleep over “the nerve of
that woman,” contemplated moving out, realized it was too much effort, and
then, finally, stayed. She also, although it was something she never
consciously admitted to herself, stopped taking such long showers and switched
to a blond hair dye with more ash tones.

Sophie wasn’t one to lose arguments once she started
them and she started them often.

True to her highly conservative nature, Sophie never
took out the anthracite coal boiler in her basement. This meant that every day
she had to load fresh coal into her stoker hopper. This was a semi-automatic
gravity-fed device that saved shoveling into the fire several times a day.
However, every other day her coal furnace created heaps of ashes from the burnt
coal which had to be carried out in pails. At seventy and alone, Sophie, as
sharp and agile physically as she was mentally, could still do this job.
Knowing that she was paying less for heat than many of her neighbors was all
the motivation she needed. She also secretly enjoyed the idea that she produced
her own ashes for covered her slippery driveway during winter while her
neighbors—the spendthrift fools—would buy bags of salt at the local store.

The only downside to this was that she would
inevitably come home on a wintery day to see a window wide open with her
precious heat escaping. Nothing made Sophie angrier.

“Victor!” she bellowed up the stairs towards Victor
Kozol’s apartment, “I said I provide heat for you not the entire city!”

“Okay Sophie, I’ll take care of it.” Still, the
guilty party, a young man by the name of Victor Kozol, was not in any hurry to
close the window. After all, even that old witch Sophie might know what
marijuana smells like.

Victor was a first-year pre-med student from Duryea,
a town about eight miles away and was upstairs indulging in a well-deserved
rest after carrying up the last of the beer, wine, and other supplies for his
latest party. It was scheduled for tonight, so he needed to marshal his
strength. Victor inhaled deeply and wondered just how problematic his landlady
was going to be.

Sophie was thinking, things were different in the
‘good old days’. Old Doc Francis, the founding president of Wilkes didn’t allow
alcohol to be served anywhere on campus, and that included faculty events.
Francis was known to threaten local neighborhood bar owners not to serve his
under 21 students unless they wanted to hear from the Pennsylvania Liquor
Control Board. And, of course, alcohol was not allowed in college dormitories.
Yes,
things were a lot quieter and much better back then,
Sophie thought.

In the early hours of Saturday morning Sophie found
herself in her kitchen fuming, she has once again banged on the hot water pipes
going up to Victor’s apartment which is directly above hers.

“Silence,” she yelled, “it’s after midnight!”

When we were these students’ age, we had to get
to sleep so we could get to work the next day,
Sophie thought, angrily. Her
not-so fond remembrances of her summer working at a button factory in Scranton
were rudely interrupted by a blood-curdling scream. Sophie looked out her
kitchen window just in time to catch a fleeting glimpse of a young coed in a
chair fall into the evergreen bush behind her back porch. It was 1:00 a.m. and
soon sirens are blaring.

Within minutes an ambulance backed into the driveway
beside her home to the scene of the accident. Sophie couldn’t believe it; the
young girl was actually limping away towards the ambulance with assistance from
the paramedics.

“Vai tu zmogau” she hollers in Lithuanian, “How’s
she not dead?” This is the last straw, thought Sophie. Victor must go.

Directly above Sophie, Victor is sitting in his
trashed living room, wondering how such a fun-filled and lucrative evening
could go so wrong. This Friday, Vic had done his usual thing. He sold tickets
to twenty students he knew from campus for $10.00 each. He then schlepped the
beer, wine, and other supplies up the steps all afternoon to prepare for the
event. With $200.00 income, Vic had doubled his money. He mused to himself,
this
is how you enjoy college life and make spending money on the side.
Life was
good. Good until Jake dared Allison to balance on a chair out on the fire
escape landing railing. It still could have ended cool, but Charley needed
another beer and bumped the chair leg trying to squeeze by; thus propelling
Allison 15 feet down into the bushes. Why did ten people have to want to smoke
outside on the fire escape at the same time? Do these college students have no
brains?

Two days later, Victor was sitting in front of Dr.
Scharter, the Dean of Men at Wilkes. This time the party hit the front page of
the “Times Leader”—the local newspaper. While the paper stated that Allison was
treated and released from the hospital, Victor was not going to have an easy
time of it. Dr. Scharter went through the usual bromides about the college and
its image and relationship with the community, personal responsibility, and
whatever else is usually said at these meetings. Victor was given social
probation for the rest of the year and warned that the next time there would be
no need for a meeting. What Scharter didn’t know at the time, since it was only
mid-term, was that Victor was missing half of his classes and flunking or
getting D’s in most of his subjects. None of this boded well for Vic’s
continuation at Wilkes.

Gryphon and His Thief by Nutt, Karen Michelle
The Demon Horsemen by Tony Shillitoe
Shattering the Myth by Zane
Arrival of the Fittest: Solving Evolution's Greatest Puzzle by Andreas Wagner
Irish Aboard Titanic by Senan Molony
The Madonna of Notre Dame by Alexis Ragougneau, Katherine Gregor
DemonWars Saga Volume 1 by R. A. Salvatore
Knights by Linda Lael Miller
The Summer of Lost Wishes by Jessa Gabrielle
The Orb of Wrath (The Merchant's Destiny Book 1) by Nic Weissman
Our partner