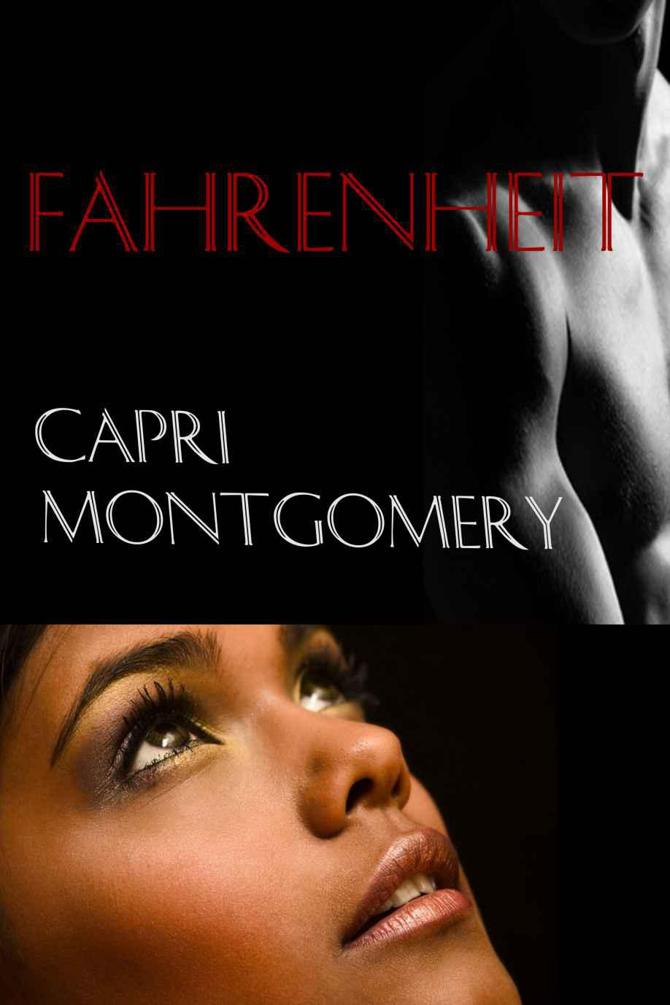 Fahrenheit is a work of fiction. Names, characters, places, and incidents either are the product of the author’s imagination or used fictitiously. Any resemblance to actual persons, living or dead, business establishments, event or locales is entirely coincidental.

Thank you, Barb, for catching the mistakes I missed. Your assist with editing has been wonderful.

Thanks to all of my readers for showing your support for my work by buying and reading my books.
By Capri Montgomery

In February
Seducing the Bodyguard
, book seven in the Men of Action Series.

In January the Shadow Hills series kicks off with
Shadow Hills: Fallen Hero
.

E
ve McGregor heard the pounding on her door, as if somebody was trying to pound right through it. It was still early, almost lunchtime and since she had been craving the usual dinner food she decided to make it for lunch. She was in the middle of making roasted potatoes and tilapia fish, both of which soon needed to come out of the oven, but given the urgency of the beating on her door she abandoned the kitchen for the front door.

What she saw when she opened the door nearly knocked her off her feet. He was dressed in the standard fireman’s getup, had striking blue eyes and a rather handsome face if she did say so herself. He wasn’t super gorgeous, or even somebody she would expect to see in one of those sexy firemen calendars, but he was still very handsome. In her opinion he was sexy in his own way. Even the scar over his right eye was sexy. He had a certain wow factor for her; one she didn’t need to be distracted with right now. She needed to focus on her career, not a man.

When she took her eyes off him long enough to look behind him she saw other men dressed in uniform, also running around her community. There couldn’t be a fire; no alarm had sounded.

“You have to evacuate!”

She wondered why he was yelling at her. “I—” She pointed behind her.

“Look I have food on if I leave it going you’re going to have a really big fire on your hands.”

He obviously hadn’t been listening to her because he reached inside her open door and pulled her out by her arm.

“My Shoes!” She walked swiftly trying to keep up with him until she stepped on what felt like a razor sharp rock. “Ouch!”

Before she could fully process the pain he lifted her off her feet. He lifted her as if she weighed nothing at all, and cradled her in his arms. Seconds later he took off running for the bushes and trees that hid the complex from those walking on the sidewalk.

He dashed through the area as if he weren’t carrying a one hundred seven pound woman in his arms, as if her weight meant nothing to him at all.

They were barely across the street when she heard a loud explosion, felt herself falling to the ground. He shifted their position to take the full force of the fall and not a second after hitting the ground he rolled over on top of her, shielding her body from the falling debris.

In any other situation the position would have been inappropriate, her legs spread wide with a strange man between them; but this wasn’t any other situation, this was life or death. As a photojournalist she knew about danger, about surviving, but this was different. This was her home destroyed. This was her life protected only by the man on top of her. And in this moment she was surprised that she could feel any sense of arousal by their position, but she did. This was so not good—on every level.

It wasn’t until pieces of building stopped raining down around them that he lifted his head to survey their surroundings. As she looked up at him she accessed how young he looked. He had to be closer to her age, or at least she thought he might be. He didn’t look as old as either of her brothers, but she had long since learned not to judge the proverbial book by its cover.

She could hear panic and chaos around her. The panic was from the other residents of the apartment complex. The chaos must have been the emergency personnel jumping into action. But when the man on top of her looked down into her eyes everything else seemed to melt into nothingness. Deep blue pierced her, seeming more striking from this distance than they had just minutes earlier.

Neither of them moved, although she was sure they should have. If she had had her camera she would have been up in action, but unfortunately her camera was in the apartment, along with the rest of her belongings, that were no doubt now blown to smithereens. There had to be something more than just a fire to cause that. They were on electric, not gas so that couldn’t have been the issue. She had never known a fire to explode an entire complex—what felt like the entire complex anyway, she wasn’t sure because from her position on the ground she couldn’t see much more than the blue sky above and the hot firefighter on top of her.

She pushed away the thoughts starting to run wild in her head, thoughts about the hot man with the deep blue eyes, and replaced those thoughts with thoughts about the here, the now, the problem she was now going to have to explain to her brothers. Florida was always on fire, and never before had she seen this type of drama hit this close to home. Once her brothers found out they would surely use this event as another reason to convince her to go back to Massachusetts, but she wasn’t going. She was a grown up now.

She had finished her Masters in art and journalism, and she landed a rather fabulous gig down in Florida with Beyond Flagler News. It wasn’t a huge press, but they thought of themselves as the CNN of the south. They brought stories to the public to mirror their opinion of themselves. If she were being honest, even with herself, it wasn’t the biggest job she could have obtained, but it wasn’t the smallest either. Their paper, though based in Flagler County, was widely distributed on the East coast. That market meant when the uprising happened in Egypt, thanks to her fluent Arabic, she was the photojournalist chosen to accompany Mitch Decker, world famous reporter who had a keen eye for a story and the tenacity to follow it no matter where it took him. She had worked with Mitch often, but he still had the right of refusal if he thought she shouldn’t go into a situation. “Into the jaws of hell,” he had said. “That’s where you have to be willing to go if you’re going to work with me.” If he thought he was going to scare her he was wrong. She wanted the danger, the adventure, the chance to prove to herself and her family that she was more than just the baby sister. She was a woman, one who was more than capable of taking care of herself. She had already proven herself to Mitch, which meant that no matter the assignment, he never thought about using another photojournalist. He had specifically requested that she be assigned to him, and so she was.

“Yes,” she nodded. “Thank you for saving my life.”

He looked at her, appreciatively she would say, but then again she had never had a man look at her that way while he was sober. Why should one start now? It never really bothered her that she wasn’t the type of woman men flocked to. In the past she was always working full-time and going to school full-time, which meant she was too busy for relationships anyway, so she didn’t care that she had never really had one—the occasional date in high school didn’t count.

“I’m Adam,” he brushed a strand of hair from her forehead.

Now it was his turn to laugh. “Well there you go. We’re perfect for each other.”

She wasn’t sure about the perfect part. She didn’t remember much about her brief childhood brush with bible studies but she did remember that Adam plus Eve equaled disaster for humankind.

“Are the two of you all right?” She looked up at the big body that was now hovering over them.

Adam helped her to her feet. She brushed dirt off her jeans before nodding affirmatively. The uniformed officer looked her over once, then twice before telling her she should get behind the safety line like everybody else. He, not so delicately, reminded Adam that he had work to do.

She had her own work to do. This many people suddenly homeless would need a place to stay, as would she. She smiled sweetly at an attending officer and he let her use his phone to make one call. She called her sister. Alyssa would be able to help her. While she had her license and her bank card in her back pocket due to an early morning grocery store run, she didn’t have anything else, and she needed a hotel room—preferably before the hotels filled up.

“Yeah, the Marriott on Old Kings Road,” she confirmed. “I’ll pay you back as soon as I can.”

“You’ll do no such thing,” Alyssa refused repayment. “You’re my little sister and I don’t mind helping you out.”

“I want to pay you back. I’ll need at least a few weeks—”

Alyssa nearly screamed into the phone. “You’re so stubborn. Miss “need to be independent” can’t take an assist from your favorite sister.”

Alyssa was her only sister, but now was not the time to point that out. The officer standing over her looked as if he were ready to call time on her phone call.

“Fine, just think of this as my repaying you for all the money you loaned me while I was getting this business off the ground. Or for all the times you covered for me when I didn’t want Gavin and Thomas to know what I was doing and where I was. Speaking of our brothers…”

“Yeah, I know. I’m on a cop’s phone right now. He’s let me make one phone call, so I can’t call them. Maybe you can call them before they hear about it on the news.” She could already see the trouble today’s events would cause. Her brothers would probably want to come rescue her. They would start in on her about moving closer to family again. No offense meant, but she didn’t want to be closer to family. How on earth was she going to learn to be her own person, to take care of herself, if she had her brothers still treating her as if she were six? “Alyssa, tell them not to come.”

“That’s probably going to be the hardest part about the phone call,” she assured her. “I’ll start with Thomas. He should be easier than Gavin.”

“Okay. I won’t be able to call you back until I’m at the hotel. Oh and Alyssa,” she looked around at the people who already seemed to be on their phones. “Hurry. I have a feeling everybody on their phone is booking a room.” She ended the call and handed the phone back to the officer.