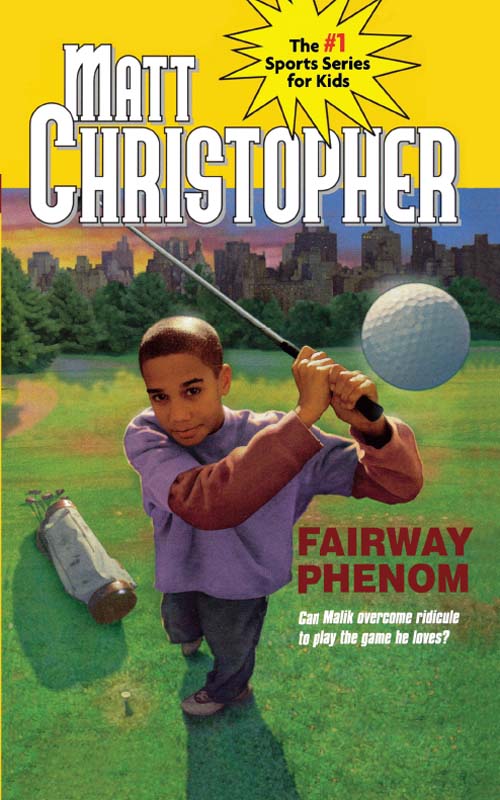 M
alik Edwards sat on the fire escape, his legs dangling off the edge. Down in the street below, his friends Curtis, Luis, and
Sean were playing stickball with some kids from the other side of Fourth Avenue. Manhole covers served as home plate and second
base, while first and third were a pair of empty trash cans.

Normally, Malik would have been down there with the others, playing stickball on these last, slow days of summer. He would
have been busy having some fun before the reading assignments and homework started to pile up, before the days started getting
rainy and cold again. But today, somehow, he just didn’t feel like it.

It was hot and muggy, and the air hung over the city like a yellow-brown curtain. Off to the west,
Malik could see high-topped clouds gathering.
Good,
he thought.
A thunderstorm’s coming.
It would clear the air out, so folks could breathe easy again.

All summer, Malik and his friends had played stoopball and stickball, shot hoops at the playground, and cooled off in the
water jets from the fire hydrants. It had been pretty good, as summers went — although he wished his mother could have afforded
to send him to camp. Malik knew a lot of kids who screamed and cried about being sent away for two months, but when they came
back, they were always bragging about all the cool stuff they’d done. He wished he could go, just once. He wouldn’t scream
and cry about it. Green grass and trees, and birds singing all the time…

“Yo, Edwards, come on down here and play shortstop!” Luis yelled up to him. “Curtis has to go home and baby-sit his little
sister!”

“Then why you sittin’ out there?”

He got up and went inside, into the cool, dark living room. He stood in front of the air conditioner for a couple minutes,
so the sweat on his T-shirt would dry out and cool him off. Then, grabbing the remote, he flopped down on the sofa, turned
on the TV, and started channel surfing.

This time on a Thursday, there weren’t any baseball games on. There was soccer with Spanish narration, but Malik didn’t speak
Spanish. There was an extreme snowboarding contest. Malik wondered where you could snowboard in August — probably New Zealand
or someplace like that. And then there was golf.

Malik had never really watched much golf. It seemed totally lame, watching some fat old guys hitting a white ball into a white
sky so the camera couldn’t even pick it up until it landed on a grassy green and people clapped politely. Bo-ring.

But something about this broadcast grabbed his attention. The man swinging the clubs wasn’t old and fat. He wasn’t even white
— he was a young
African-American guy, just like Malik, swinging his club so hard that the ball rocketed straight into space. Instead of polite
clapping, the crowd whooped and yelled like they’d seen something totally incredible. Malik leaned forward on the couch and
turned up the volume.

“The number-one golfer in the world is showing once again why he is number one,” said the announcer. As the golfer strode
down the course, people ran along the sidelines to keep up with him, falling all over themselves as they struggled to take
his picture. Young girls held up signs saying “Marry me!” as he passed them. Suddenly, golf seemed a lot more interesting
to Malik than it ever had before.

Not that he’d ever played, of course. He lived in Brooklyn, for goodness’ sake! How was he going to play golf? Besides, he
knew what the other kids would say — the same thing
he’d
say if Curtis or Luis suddenly put on orange pants and a hat with a pom-pom on it and went off with a golf bag over his shoulder.

“Well, Bob,” the announcer was saying, “this sure isn’t your father’s golf game anymore!”

“I’ll say,” Bob agreed. “With a score of sixty-one today, we have a new record for this golf course. The
other players are going to have a rough time catching up.”

Sixty-one. Sounded good, Malik thought. He’d heard somewhere that in golf, the lower your score was, the better, since it
counted how many times you had to hit the ball to get it in the hole. He also knew there were eighteen holes on a golf course.
So let’s see… sixty-one divided by eighteen…

The heat must have been frying Malik’s brain, because he couldn’t do the math, at least not right then. The leader of the
tournament, done with his round for the day, waved to the crowd and smiled before disappearing into the clubhouse.

Malik turned off the TV and got up. Golf, huh? He’d only watched for about ten minutes, but it had actually been kind of cool.…

He went down to the street in the elevator, to see if the guys were still playing stickball. They weren’t, but Luis was still
there, throwing the pink rubber ball at the nearest stoop, then running to catch it, over and over again. “Yo!” Malik hailed
him. “Whatcha doing?”

“Okay.” Malik let Luis get in front of him. Luis threw the ball against the steps, and Malik caught it on the fly. “One out.”

Luis whacked the ball down again. This time, he got two bounces out of it before Malik, at the curb, scooped it up. “Man on
second,” Luis said.

“Hey, Luis,” Malik said as Luis wound up again. “You ever watch golf on TV?”

“I don’t know. I watched one guy today, and it was kind of cool. He hits it so far — like a mile past all the other guys!”

Luis turned and gave him a look. “Malik, man, don’t go weird on me, okay? Golf is for old guys and losers.”

“Yeah, I guess.” Malik backed up, getting ready for the next bounce of the rubber ball. But his mind was still on the picture
of the young guy — the one who looked a little like him, only a lot taller — swinging that club and hitting the ball way out
of sight.

The rubber ball hit Malik right in the forehead and bounced away. “Ha-ha!” Luis laughed. “Wake up, man! You sleeping? Two–nothing,
my favor. Still only one out.”

Malik checked for traffic, then trotted across the street to get the ball. When he returned, he tossed it back to Luis. “I
don’t really feel like playing,” he said.

“Just tired, I guess. Too hot. And school next week.”

“Shut up!” Luis ordered, plopping down on the curb next to Malik. “Don’t talk about it. I’m not ready for that stuff.”

“Hey, speaking of shutting up — did you hear Old Man Quigley died?”

Old Man Quigley was otherwise known as the “Shut-Up Man,” because he was always yelling at the local boys to shut up whenever
they played ball in front of his apartment.

So… the old guy had died. Malik had never really known him. He was surprised to find that he felt sad about it.

“Yeah,” Luis said. “There’s a big Dumpster in front of the building now. His family’s there, throwing his stuff out. And there’s
this bag full of golf clubs lying right on top. I guess the old guy played golf when he was younger or something.”

Malik jerked to attention. Golf clubs? In the trash? “Did you check them out?” he asked Luis.

“Hey, you want to go over there?” Malik asked, getting to his feet. “Maybe there’s some other cool stuff.”

“Waste of time. It’s all junk. It’s like the Shut-Up Man never threw anything out.”

That sounded cool to Malik. He liked going through old stuff, even if it was junk. To him, it was like looking at something
that came out of a time machine. A piece of the past. Junk that once was new.

“I’m gonna go over there,” Malik said. “You can come if you want.” He was hoping Luis would turn him down. That way, he could
check out those golf clubs in peace.

“Ah, okay,” Luis said. He hoisted himself up and followed Malik as they headed for Mr. Quigley’s building. “But I’m telling
you, it’s a total waste of time.”

The houses on Old Man Quigley’s block were mostly apartment buildings, with occasional rows of attached private houses — or
at least, they used to be private. These days, there were usually three or four families living in each of them, one family
to a floor. Mr. Quigley’s house had been one of these. He’d lived on the first floor, with a window facing the tiny front
garden and the sidewalk beyond. As long as Malik could remember, Mr. Quigley had been sitting by that window, watching the
world go by. Other than “Shut up, you boys!” he’d never heard him say very much.

Malik wondered about Mr. Quigley as they approached the building. Had the old man really played golf? It seemed impossible.

There were the clubs, right on top of the big, full Dumpster that sat out front by the curb. So obviously Luis had not been
lying — Mr. Quigley had played golf once. It was hard to imagine. The old Mr. Quigley Malik had known was bent over and walked
with a cane all the time.

Malik wanted to check out the clubs more closely, but there was Luis, waiting to make fun of him if he did. He’d call Malik
a weirdo and a loser. So instead,
Malik checked out an old, broken radio that would have been cool if it were in one piece. Then he pushed aside a stained tablecloth
and some chipped dishes to look at some furniture that had been junky even when it was new. All the stuff of the Shut-Up Man’s
life, now piled up in a Dumpster.

Malik felt sad again. He wished he could have seen Mr. Quigley swing a golf club, just once. It amazed him that the Shut-Up
Man had ever been young. But he knew it was true. Long, long ago, he’d been the same age as Malik!

“Didn’t I tell you?” Luis said. “It’s all garbage. That guy was crazy. Look at all this stuff he kept!”

Malik found a pair of glasses he’d seen on the old man. One lens was cracked, but Malik kept the glasses, anyway. He stuffed
them in the pocket of his baggy shorts — a souvenir to remember Mr. Quigley by. But he didn’t take the thing he really wanted
— the bag full of golf clubs.

Not right then, anyway.

It was only after supper that Malik returned to the Dumpster. He’d loaded the dishes into the dishwasher and set it going.
His mom was watching TV
in the living room, resting up after a hard day at the office. She didn’t notice when Malik silently slipped out of the apartment.

The sun had set, and the street lights had come on. The sky was dark purple, going to black. Malik had to climb up onto the
Dumpster to reach the clubs. He grabbed the shoulder strap on the side of the bag —

“Hey!” someone shouted behind him.

Malik’s heart gave one big
thwack
inside his chest. “Huh?”

The Love Letters: A Novella by Ashley Pullo
The Discomfort Zone by Jonathan Franzen
And a Puzzle to Die On by Parnell Hall
The Death of Me by Yolanda Olson
Cold Sassy Tree by Olive Ann Burns
Sunrise with Sea Monster by Neil Jordan
Bush League: New Adult Sports Romance by Pfeiffer Jayst
Bloody Crimes by James L. Swanson
Arctic Fire 2 by Erica Stevens
Wolf's Oath (After the Crash 3.25) by Maddy Barone
Our partner