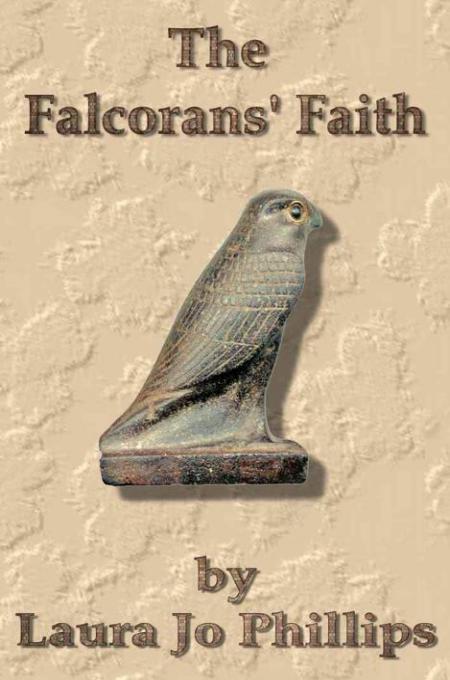 For my family.  For my husband.  Thank you.

Look for previews and coming release announcements at:

Other Books by Laura Jo Phillips

Book One of the Soul-Linked Saga

Book Two of the Soul-Linked Saga

Book Three of the Soul-Linked Saga

Book Four of the Soul-Linked Saga

Book Five of the Soul-Linked Saga

Book Six of the Soul-Linked Saga

Book Seven of the Soul-Linked Saga

Quest for the Moon Orb

The Orbs of Rathira, Book One

Quest for the Sun Orb

The Orbs of Rathira, Book Two

(Available under the name Kathleen Honsinger)

To Honor You Call Us

Man of War, Book One

For Honor We Stand

Visit the home of the Soul-Linked Saga online at:

The Prophecy of Semat Katre

In the fullness of manhood, the patience of the royal sons of the third generation beyond this day, shall be met with their soul’s fulfillment in a daughter of a distant sun.

Have they faith in the three, by the three shall all be blessed.

Radiant with the glory of lau-lotu shall they descend from the sky in flame before the people, and the people shall be renewed.

Shall faith be denied, so the people shall be lost, forevermore.

The renewal of the people shall begin with the Soul,

And these shall be the Three.

Have they faith in the Three, by the Three shall all be blessed.

By the Three shall be found new knowledge

Of enemies born to be brothers,

Of schemes from beyond the Veil of Stars to cast the peoples of the suns numbering a hundred times ten into the eternal deep.

Have they faith in the Three, by the Three shall all be blessed.

Shall the Three endure, the people and their brothers shall banish the Black Deceivers from the Veil of Stars forever.

Shall the Three perish, so shall the people be lost, forevermore.

The Gathering of The Nine

Behold, Clans of the Jasani, the Lehen Triad of Jasan is formed
.

Through them, we, the Nine First Arimas of the Nine Clans of Ugaztun, shall speak to the people.  A truth that should not have been forgotten, was forgotten.  Before the future can be formed, this lost truth of the past must now be remembered.”

“
Hear us now
,
as we are not bound by the Covenant of Silence that should never have been made.”

“So shall we speak of the Lost Clans, of the Owlfen, and the Tigrenca.”

In that time, the Clans fought among themselves, squabbling over land and air and sea as young races often do.

In that time, Enclave was a gathering of females, led by the First Nine Arimas, in part for those women whose time it was to consider the finding of their Rami.  All but a few of the women of all the Clans attended.

“The Owlfen and the Tigrenca were at war, each with the other.  The heat of their battle ran through the Enclave.  In the depths of their blood rages, they noticed not where they were, nor what they did.

“By day’s end, all of the Nine were dead, as were all but a few of the other females.  Such was the blood rage of the men of the other Clans that the Owlfen and the Tigrenca were both annihilated in retribution.

“Only when the last of the two Clans was destroyed, did the blood rages cool and the males understand what they had done.  The Clans were now seven, out of communion with the world and nature.  The power of the Clans was broken.  There were few women left, and the people were lost.

“In despair, the male-sets of the remaining Clans gathered together in the first male Enclave.  They worked together in peace to find a way to save the race of the Ugaztun.

“So it was decided that the women would not go to war, nor would they be taught the ways of war, that the men would guard and protect them.

“So it was decided that the Clans would not war, but become brothers in all things and never again raise hand or claw or fang or talon one to the other.

“So it was decided that the Shame of Ugaztun would remain in the past, and not be spoken of again under the Covenant of Silence.

“And so it came to be, and the Clans kept their covenant and warred no more.  In time, the Shame of Ugaztun was forgotten, as were the Lost Clans, as though they had never been.

“Then came the time of the Narrasti.  The women were sheltered, coddled, hidden away.  The Seven First Arimas tried to come together, to raise the strength they knew should be their own, to warn the Clans of the future which lay ahead on the chosen path.  But they did not know they were supposed to be Nine.  They did not know the past.  Thus they could not raise that which they needed, and it came to pass as they had feared, and all of the women of Ugaztun were lost.

So comes the chance to renew the Lost Clans.  If the Clans are not restored to number nine as they are meant, so shall the people be lost, forevermore.

“By the energy and the power of the Heart, Soul and Mind are the Jasani now truly joined with the Earth, Air, Fire and Water of this new world.  If the Clans heed not the Triad, if they do not abide by their words and warnings, the Clans of Jasan will no more be.  If the Clans honor the wisdom of the Triad, there is hope.

So speak the Nine.

So is our task done.

The Oraculum of the Arkandu

Oh Black Deceivers, you have come, on the day and hour foreseen and appointed.

We have seen our death, and accept with grim sadness our passing into the realm which lies beyond.

Before you do the evil deed you have come to carry out, know this;

You are allotted a span of time for your webs of evil to endure, and when that span is done, so are you.

Across the Wide Deep, the eggs of your destruction are already hatched.

In the fullness of time, you and all your broods shall be devoured.

In the Veil of Stars, nestled in the crook of the Great Hunter's Arm, lie the peoples of a Thousand Worlds, all woven from the same Fabric of Life, and thus connected one to the other in spite of the differences they perceive of themselves.

Thus shall they destroy you.

And none shall mourn your passing.