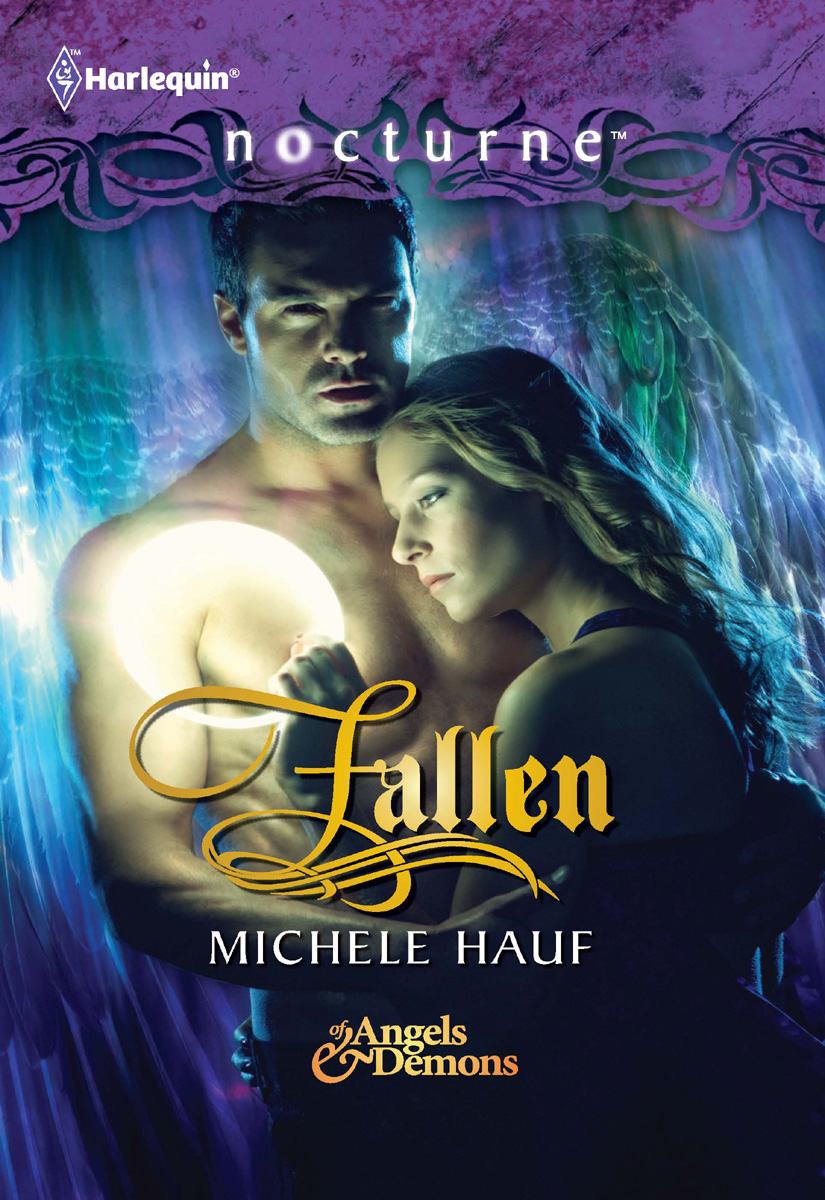 There was something in his eyes.

A bright reflection ofâ¦a hard and ruthless warrior? Whatever it was in his eyes, it was of the angelic dominions.

He moved swiftly. His lips connected with hers. He bracketed her head with his palms, not pressing too roughly, but keeping her exactly where he wanted her.

It was a kiss. A strange, surprising kiss. Rough and fast.

Pyx had not been kissed before. And it was being issued by a Fallen one. To a Sinistari. How many ways of wrong was that?

Cooper swept his tongue across hers. A giddy sparkle radiated in Pyx's bellyâuntil he pushed her away and stepped across the room. Hand to a hip, he turned and gazed at her.

She swiped her mouth with the back of her hand, forcing out her most pissed tone. “That's not how you disarm an opponent.”

“Oh, no?” He toed the blade and kicked it across the floor toward her boot. “Looks like it worked.”

has been writing for over a decade and has published historical, fantasy and paranormal romance. A good strong heroine, action and adventure, and a touch of romance make for her favorite kind of story. (And if it's set in France, all the better.) She lives with her family in Minnesota, and loves the four seasons, even if one of them lasts six months and can be colder than a deep-freeze. You can find out more about her at www.michelehauf.com.

Opposites do attract, and that makes writing, and thinking up new and interesting heroes and heroines so much fun. It's not always easy. The hero of
Fallen
has no past. He's an angel, and before he landed on earth, well, he spent a lot of time just hanging out in Heaven, imprisoned for his original Fall thousands of years ago. So where to begin with a man who has so much to learn and the entire world before him?

One of my favorite qualities in a man is a childlike wonderâthe ability to see the world as if for the first time, and Cooper is that man. I hope you'll enjoy this entry in my
Of Angels and Demons
series. And so you know, this story is a part of the overall paranormal world that I write in, and I call it Beautiful Creatures.

For more information on my books and the characters within them, do stop by my website, www.michelehauf.com.

To any and all who like to marvel and wonder at the world.

P
yxion the Other had been waiting for a summons to earth too long to fathom the passage of time. Centuries had passed. Even millennia.

Now Pyx stood among the mortals on a busy street in a city that boasted the much-lauded, medieval NÃ´tre Dame cathedral. After a night of walking the worldâfor that is how the Sinistari gained knowledge and assimilated to the mortal realmâa fierce intuition had led Pyx to Paris.

Cars, trucks and two-wheeled motorbikes zoomed by dangerously fast. The air held a miasma of chemical smells and off-gases. The chatter of water in an ancient fountain seemed out of place tucked among the urban sprawl, the result of rapidly growing populations over the centuries.

Pyx had arrived from Beneath naked and in human form, and so with but a mental gesture, had adopted clothing similar to that which nearby mortals wore. Dark, slim-fitted jeans, boots with a good heel and chains, and
a button-up shirt that sported a bloody skull diagonally on the shoulder. It got the looks. Mortals stopped to gawk as Pyx strode by, confident and head held high, jaw snapping at gum snatched from a vendor's stand, which proved an interesting mortal treat.

Passing a mortal female chattering with another, Pyx nicked the pink cellular phone from her back pocket, without missing a stride. The small device had a touch screen and it fascinated Pyx. The learning curve was a snap thanks to small icons on the screen. Aiming the camera lens across the street, the demon took a photograph of a couple kissing; the man's hands were hidden high beneath the woman's short leather skirt.

“Have to get me some of that,” Pyx said with an agreeable nod. “Mmm, lust.”

Sinistari were notorious for indulging in mortal sin. And what Pyx saw going on between the man and woman sure looked like a lot of sin.

Tucking the phone in a back pocket, Pyx strode purposefully across a busy street and aimed for the garish display of colored flash decorating the window of a tattoo shop.

A street vendor had set up outside the tattoo shop, and Pyx leaned over to smell the fresh, seasoned meat turning slowly on the vertical rotisserie. Being consigned to Beneath had stripped away all sensations such as touch, taste and smell. It was all Pyx could do to wait as the vendor stuffed the savory meat into the soft gyro bread.

“Give me one with pomme frites.” Pyx pointed to the greasy fries that glistened with salt crystals. Speaking French was easy, for while walking the world the demon had assimilated all languages.

The vendor nodded and smiled widely at the large tip Pyx had added along with the price of food. Demons could put thoughts into mortal's hectic minds far too easily in this day and age. It was one more sliver of unremarkable chaos added to the heap inside a mortal's brain.

The first bite was spectacular. Grease oozed and bread squished. Savory and warm, it hit a wanting spot in the demon. A deep, achy spot that wanted more. Earth offered far and beyond the pleasure Beneath had offered, because Beneath had offered nothing. Nothing.

Pyx gobbled up the gyro and studied the tattoo flash posted on the window. The skull with the worms crawling through the eye sockets appealed.

Or maybe, the skeletal angel with wings on fire. “That's what I'm going to do to you, Fallen one.”

The demon tossed the empty food wrapper over a shoulder and it missed the trash by a long shot. “Watch out. I'm coming for you, Juphiel.”

But first, a little decoration for this plain mortal costume the demon had been given.

Striding inside the tattoo shop, Pyx nodded to the beat of the loud rock music and swaggered over to the grinning skin artist. Tugging up the shirt in the back, Pyx straddled the chair and sat through two hours of pain.

Wow! It hurt like aâ Pyx had nothing to compare it to. Never felt
anything
like that before. This mortal costume provided pain and sensation the demon had never felt while in its adamant demonic form. But nothing was going to make this demon flinch.

When the tattoo artist finished and rubbed a cool ointment over the elaborate design, Pyx refused a bandage.

“You should keep it covered for twenty-four hours,” the artist explained in French. “It will not heal properly.”

Pyx ran a finger through the ointment, and then wiped it on the artist's shirtsleeve. “It'll be healed by the time I step outside your fine establishment. Now, how much? I've got places to go, things to see, angels to slay.”

The artist said it would be five hundred euros.

The man nodded. “Thanks. Hey, honey, you come back to Spider if you want another tat.”

Pyx sneered and wondered briefly if the man was one of those homosexuals. He paid the demon no mind as he went about cleaning his work area.

Swinging about to study the tattoo in the mirror on the bathroom door, the Sinistari demon hissed at the image staring back.

A tall redheaded person with hair down to the elbows cast a startled look in the mirror. Curves rounded in at torso and out at hips and stretched the shirt across the chest. The clothing fit well, but it was disconcerting because the style was made for men. And what Pyx sawâ¦

What in all of Beneath? Was this some kind of joke? The Sinistari demon always manifested as male once summoned from Beneath. As far as Pyx knew.

Pyx turned sideways and clamped both palms over the breasts stretching the cotton shirt. The tattoo artist gave her a questioning look.

“Yep, they're real.” Her lips pouted a little too femininely when she made a face. Upon arriving, heâor rather
she
âhad assumed the clothing so quickly, heâ
she
âhadn't noticed the extra curves.

“Problem?” the artist asked as he cleaned his tattoo gun with an alcohol swab.

Pyx swung and hooked a hand at her hip. “You think I'm a girl?”

“You got a problem with your sexuality, pretty demoiselle?” He smirked, revealing the tip of a gold incisor. “There is a group that meets down the street every so often. They talk about how they're trapped in the wrong body.”

“I am not trapped. I amâ¦” She looked in the mirror. Pretty, as far as mortal women went, she had to admit. She wouldn't turn away from such a sexy looker, that was for sure.
She?
“â¦a chick?”

What, in the black sea Beneath, kind of joke was this?

Rolling her head and huffing, Pyx kicked the door open and stomped out from the small studio. The gyro vendor smiled and cocked his head toward her. She was still hungryâshe'd never be fullâbut now her appetite waned.

She'd been saddled with a chick body while here on earth to track a renegade Fallen who would be hot to track his muse and put a nephilim child in her belly.

Well, she wouldn't let appearance keep her from being the best Sinistari ever. She could do this. She
would
do this. Didn't want to risk being sent back Beneath because she wasn't doing the job properly.

She'd have to accept the fact she may be a female for her duration on earth.

Tromping down the sidewalk in her shitkickers, Pyx now mused about the name the other Sinistari had given her while serving time Beneath: Pyxion
the Other
.

Apparently they had known something she had not.

Bound To Love by Sally Clements
Forest Whispers by Kaitlyn O'Connor
Secrets on Saturday by Ann Purser
Keeper of Dreams by Orson Scott Card
Of a Fire on the Moon (9780553390629) by Mailer, Norman
Defiant by Smith, Bobbi
Prince of Darkness by Penman, Sharon
The Complete Malazan Book of the Fallen by Steven Erikson
The Jalna Saga – Deluxe Edition: All Sixteen Books of the Enduring Classic Series & The Biography of Mazo de la Roche by de la Roche, Mazo
An Ideal Wife by Gemma Townley
Our partner