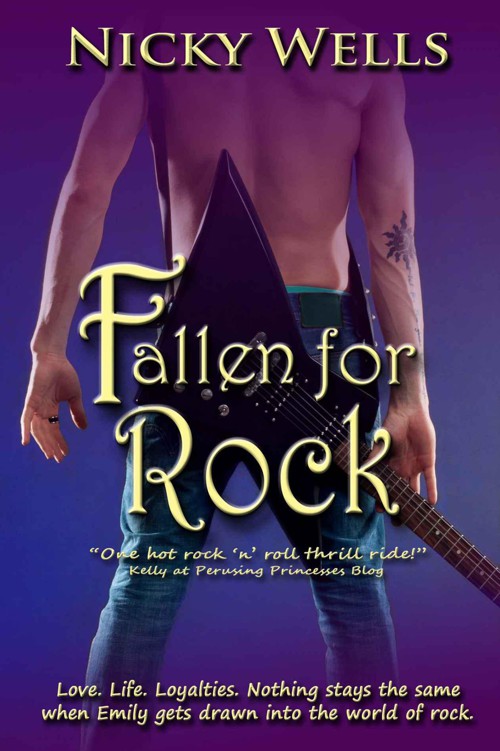 Love, life, loyalties. Nothing stays the same when Emily gets drawn into the world of rock.

‘A riveting story depicting the power of music. Fallen for Rock is one hot rock ‘n’ roll thrill ride you do not want to miss
!’

‘Fallen for Rock takes the action off stage to give readers a full rock ‘n’ romance experience!’

‘Striking all the right chords and never missing a beat, nobody writes the music quite like Nicky Wells—I absolutely loved Fallen for Rock!’

Tanya Farrell at After The Final Chapters

‘Yet again Nicky Wells has delivered an outstanding rock and roll love story that will entertain you and make you wish you could have your own rock star adventure! Fallen for Rock will thrill you and spark a desire to follow your dreams, jump aboard that tour bus, grab a rock god and
rock on
. Fallen for Rock has the WOW factor!’

All rights reserved. No part of this novel may be reproduced in any form by any means, electronic or mechanical (including but not limited to the Internet, photocopying, recording), or stored in a database or retrieval system, without prior written permission from the author. This includes sharing any part of the work online on any forum.

Nicky Wells asserts her moral right as the author of this work in accordance with the Copyright, Designs and Patents Act 1988.

The characters and events in this book are fictitious. Names, characters, places and plots are a product of the author’s imagination. Any similarity to real persons, living or dead, is coincidental and not intended by the author.

Cover image: “Back of Guitarist” © Viorel Sima via Dreamstime.com

To the Three Greats in my life:

You gave me the rhythm, the words, and the passion.

Thank you for the music!

A British Novel with British Spellings

Following the success of last year’s Christmas novella, ‘Spirits of Christmas’, which was written in British English for that extra touch of local colour, I decided to write this full-length novel in British English too. It is fitting, after all, as the novel is set entirely in the UK and populated with British characters throughout.

Therefore, my North American audience will find that the characters in this story like
colo
u
rs
, proceed with
hono
u
r
, make
judg
e
ment
s,
apologi
s
e
, and resist
generali
s
ations
. They
travel
l
ed
,
dial
l
ed
and
marvel
l
ed
. They wear
undies
rather than panties and
p
y
jamas
rather than pajamas, and they use
mobiles
instead of cell phones. They also say ‘
cor’
quite a lot, which denotes surprise, excitement, admiration or alarm (and sometimes all of the above at the same time). The list goes on…but I hope you’ll enjoy the ride despite these strange spellings and the occasional unfamiliar expression! Thank you for bearing with me. Rock on!

My elderly neighbour’s voice rang out shrill and piercing through the hallway, greeting me before I had even reached the third floor. What did she do, wait up and watch out the window for me all evening? It was nearly ten o’clock on a Friday night.

‘Thank you, Mrs Bowden,’ I called wearily while I climbed the last four stairs. ‘Any idea what it could be? Not a final demand from the debt collectors, I hope?’

Might as well give her the satisfaction of some gossip, not that I was really at risk of being evicted.

‘I don’t know, but I don’t think it’s anything like that,’ the answer came immediately. ‘The address is typed, and there’s a sender’s stamp here that says Rock Radio FM.’

I finally reached the top of the stairs and wiped a loose strand of hair out of my face. I was bone-tired after a long week at work and fancied nothing more than a quick bath and a sit-down with a glass of wine. Alas, there was small talk to be made.

‘Good evening,’ I said when I reached my landing.

My neighbour stood inside her own front door, adjacent to mine. She wore her customary day coat, and her wispy grey hair was piled high on her head in an old-fashioned, slightly straggly and lopsided bun. I lifted a hand to my own chignon, which I kept deliberately severe for work, and I wondered if I would look similarly bizarre in my old age.

‘The postman woke me from my midday nap,’ Mrs Bowden informed me as if this were somehow my fault. ‘I had to sign for this, you know.’

Ah. It
was
my fault. I fixed a smile on my face. If she didn’t hand over the mail soon, I would go mad. My feet hurt, and I felt sticky and uncomfortable. Working fifteen-hour days as a financial analyst in a city bank might not be the same as working down a mine, but it certainly left me feeling grotty and irritable all the same.

‘I don’t suppose it’s from that rocker boyfriend of yours,’ Mrs Bowden continued, still holding on to my mail. I hadn’t even had a chance to set eyes on the mysterious envelope yet.

‘I don’t suppose that’s any of your business,’ I offered tartly before biting my tongue. ‘I’m sorry. I’m a bit tired. Thank you for accepting my mail on my behalf. I really appreciate it.’ I smiled as brightly as I could. ‘You’re quite right, it’s unlikely to be from Nate, especially since we haven’t been dating for nearly a month now.’

I paused and looked at her pointedly. Finally, she proffered the envelope. Brown and slim but rather large, it bore my name and address in bold printed letters. At the top left-hand corner sat the Rock Radio FM logo.

‘Here you go, dear. I’m glad to help out a young filly like yourself, working all the hours that God gave you. But you do look rather peaky, you know, if you don’t mind me saying.’

As usual, she didn’t acknowledge my announcement that Nate was no longer my ‘rocker boyfriend’. I had told her at least a dozen times that he would no longer trudge up the stairs at all hours of day or night, banging guitar cases against the bannisters and chipping the paintwork. But still she asked.

I took the letter out of her hands. ‘Thank you, Mrs Bowden. And a good night to you.’

‘Why, I wish you a good night too, Emily. Aren’t you going to open it?’ Her eyes dulled with disappointment at missing the conclusion to her drama.

‘In a little minute, perhaps. Or maybe in the morning. I doubt it’ll be important.’

‘Oh, but it must be! Otherwise I wouldn’t have had to sign for it, now, would I?’

Her logic was compelling, and a tiny spark of excitement sprang up in my heart. What
could
be in this strange letter from Rock Radio FM? Nonetheless, I remained firm. This was my letter, and goodness knew what was inside. Perhaps Nate had taken a job at Rock Radio FM and started sending me hate mail, just for the heck of it. I hadn’t been terribly subtle about my reasons for ending our relationship, after all. Nor very kind. I still cringed at the memory, but quickly assured myself that it was for the best.

‘If it’s anything interesting, I’ll let you know,’ I promised my neighbour. I offered a final smile and turned on my heels towards my own front door, unlocking it and stepping inside in one smooth move. The door fell shut behind me with a satisfying clunk. Home at last.

The Brass Verdict by Michael Connelly
Dictionary of Contemporary Slang by Tony Thorne
Savant by Nik Abnett
Love's Forge by Marie Medina
My Way to Hell by Cassidy, Dakota
Gena Showalter - [Lords of the Underworld 13] by The Darkest Craving
Babyhood (9780062098788) by Reiser, Paul
Frozen Earth: The Once and Future Story of Ice Ages by Doug Macdougall
War Babies by Annie Murray
The Indigo King by James A. Owen
Our partner