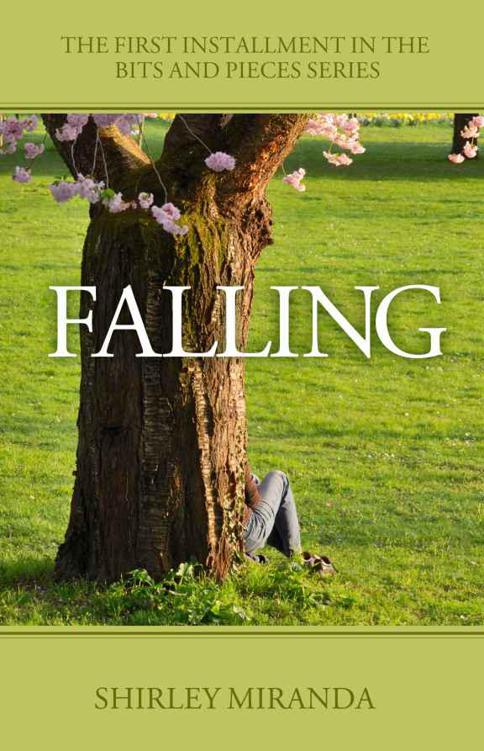 Book #1 in the Bits and Pieces Series

The characters and events portrayed in this book are fictitious. Any similarity to real persons, living or dead, is coincidental.

The Author holds exclusive rights to this work.

This e-book is for your personal use only.

It may not be shared with others.

Please respect the hard work of the author and purchase additional copies for others to read.

To My Husband – Thank you for encouraging me to put my stories down on a page. Without you, I would never have embarked on this journey.

To My Family– Thank you for your never-ending support.

Describe a significant event in your life and how it changed you (Minimum: 750 words).
Ugh. What kind of scholarship essay prompt is this? It was nice to find some scholarships that juniors could apply to, but I really didn’t want to answer
this
question. I know there are other scholarships I could apply to.

I put the application form at the bottom of my pile of papers. The due date was months away. I’d rather focus on the ones that were coming up soon. It was a little early for most people to start looking at scholarships for college. But I’m not most people. Well, I am, but I’m not. I wanted to make sure I had the money to go to whatever school I wanted to. Which was any school where I didn’t have to live at home.

The thing about essays for scholarships and stuff, they want you to reflect on what you did, what you’re doing, who you are, that kind of stuff. Reflect, reflect, reflect. What am I? A mirror?

When I look in the mirror I see this warped version of me – the one my parents see and the one that I think I am. My parents see me as a five-year-old looking for trouble and finding it, or it finding me. But I’m sixteen and if I stood in a crowd, no one would notice me. I’m too plain and short to stand out. Actually, I like the fact that in a group of people I can blend in. There are too many other things in my life that would make me stand out and I don’t like to call
that
kind of attention to myself. My parents hate negative attention too, so anything bad that happens is denied – never existed. That’s about all we agree on. The problem is… some things are too hard to deny and I can’t talk to them or anyone else about it. It’s easier to avoid my parents than to look at them and know we can’t talk about anything.

I don’t even have friends I can talk to. It’s always been hard for me to make friends. When I was younger, we moved around a lot for my dad’s work. My only dream was to have the same friends from junior high to high school - like most kids got. That didn’t happen. Most of the kids at my school grew up together and had history together. I envied that sometimes. To have friends that
knew
you, that
understood
you, that would be there for you – no matter what. Actually, last year, I thought maybe it’d happen. I had some friends, we hung out and did stuff together. When I stopped hanging out with them, they didn’t seem to notice. Maybe it wasn’t meant to be. Maybe that’s my fault. It’s always my fault.

I stared at the application. It wanted me to list my hobbies. For most people, that isn’t a hard question, but for me it is. It’s not like I’m on a team or anything at school. I’m far too uncoordinated for that, not to mention not athletic at all. I don’t think that studying and doing homework counted as a hobby. I had to list
something.
The closest thing I had was singing. I loved to sing. Melancholy songs befit me. I could relate to the sad, heartbroken, anguished, the longing. It was very easy for me to put that feeling into my singing for those songs. I could do the happy, cheery songs, they just weren’t my first choice. It was nice to pretend to be that. It allowed me to step outside of myself and be someone else. I ceased to be me and cloaked myself in whatever carefree attitude the lyrics demanded. Acting. It’s a nice escape.

I had a small part in the school play last year. It was fun to pretend to be someone else. I was good at it, at least I thought so. Don’t ask my parents what they thought, they didn’t bother to come to any of the performances. They thought it was a waste of time, like many of the things I did.

Not exactly stuff you’d put into an award winning essay. I’d have to think of something else to write. Not that that’s hard for me to do. I could BS among the best of them, if I wanted to. I’ve done it to get people off my back and to avoid getting into some big thing with my parents.

It was easy, most people don’t look deep enough to know if you are telling the truth. They only hear what they want anyway.

I really hated the part on applications that asked you what you are. It really shouldn’t matter. I didn’t think it should. Who cares what the shade of my skin, or anyone else’s, was? I looked at the options: American Indian, Asian, Black or African-American, Hispanic or Latino, Native Hawaiian or other Pacific Islander, and White or Caucasian. Where was American? That’s what I wanted to check. That’s what I am.

When my parents came to the
US
, they wanted their kids to assimilate to the American culture - I think they never really wanted to have kids because I’m an only child. So, I did. It’s not that I hate my parents’ culture, which I guess,
technically
is mine too. It’s just I don’t care for it, seems archaic many times. If you’re a free thinker, they say you’re hard-headed or stubborn. If you don’t agree with someone older than you, then you are disrespectful. It doesn’t allow for free thinking and your own ideas. Some of the food is okay. But culture is more than food. Of course, now that I’m completely assimilated, embrace the American culture and am an independent thinker, they don’t seem to like it because I’m considered stubborn, hard-headed and disrespectful. Hypocrites.

I spent too much time at home. Once school was over, I’d head directly home and start my homework. I hated being out alone when it was dark. Actually, I just hated being out alone, the dark just compounded my anxiety. Often, I’d get at least two to three hours to myself before my parents would get home. Sometimes, I’d get even more than that because they’d meet up together for golf or dinner or something. Those nights were the best.

Being alone at home was nice. Actually, I didn’t see myself as alone, as long as I had one of my two best friends with me - the television or my music. The noise from my television or MP3 player filled the house and kept me company. The acoustics were better in the family room, so I usually did my homework in there when I was home alone. Once my parents were home, I’d sequester myself in my room to do my homework.

I sat in the middle of the family room and searched through my albums trying to find a song to audition with. Mrs. Marshall, my choir teacher, was holding auditions in two weeks for male and female solos for the upcoming winter concert. I really wanted to get the solo. I had to find a song that would show my vocal range, make me stand out from the others. There were several girls in class that had great voices, some of them had been taking vocal lessons. I never had lessons, I taught myself by just singing along to my favorite songs. I enjoyed choir and wanted to do more.

I hooked up speakers to my MP3 player. I needed to fully hear my voice with the music and ear buds weren’t going to do it. I tried song after song, I must have spent at least two hours trying out songs. I still hadn’t found the right song. I had worked my way through female solo artist songs and was now onto the musicals. I thought I found a song that would work. It showed my range and complimented my voice. I sounded good. Well, I had to admit, better than good. I was happy that I had finally found a song. I just needed to keep practicing over the next two weeks, so I would be at my best for the audition.

I was in the middle of practicing when I heard the garage door open. My mom was home. She walked into the family room, dropped her bag and jacket on the couch. I hope that she would tell me that I did a pretty good job of choosing a song and that you couldn’t really tell I was singing along. I hoped that she noticed that I matched the song well.

“Hello,
Elizabeth
.” My mom interrupted me in the middle of the song.

My mom would think me rude if I didn’t stop what I was doing and not acknowledge her right away. I stopped singing. “Hi, Mom.”

“What are you doing?” I was surprised that my mom was even interested in what I was doing.

“Practicing. There are auditions in a couple weeks for the solo in the winter concert. And I thought I’d try out.” I didn’t like sharing much with them, unless they asked. When they did, I always braced myself for their reaction.

She shook her head and frowned. “I don’t know why you are bothering to waste your time. You know you won’t get it.” She couldn’t even acknowledge it was brave of me to try out or wish me luck. I was crushed. “You don’t want people laughing at you, do you?”

No, I didn’t. I didn’t think I was bad, let alone bad enough that others would laugh at me… until now. The thought of it hurts, cut to the core of me and my insecurities. I didn’t want to give what my mom said any credence. But she was my mom, what if she was right?

“I was just practicing. You don’t think I sounded… okay? I just wanted to try…” I felt small and like I was shrinking more and more by the second.

“If that’s all you want to do and you have no real intention to singing alone, then why bother and waste everyone’s time?” She seemed annoyed.

Saving Charlie (Stories of Serendipity Book 9) by Anne Conley
Laws of the Blood 2: Partners by Susan Sizemore
Dying of the Light by Gillian Galbraith
One Ghost Per Serving by Nina Post
Last Call for Blackford Oakes by Buckley, William F.;
Silence Of The Hams by Jill Churchill
Sammy Keyes and the Showdown in Sin City by Wendelin Van Draanen
The Philosophy of Andy Warhol by Andy Warhol
The Ooze by R.L. Stine
From What I Remember by Stacy Kramer
Our partner