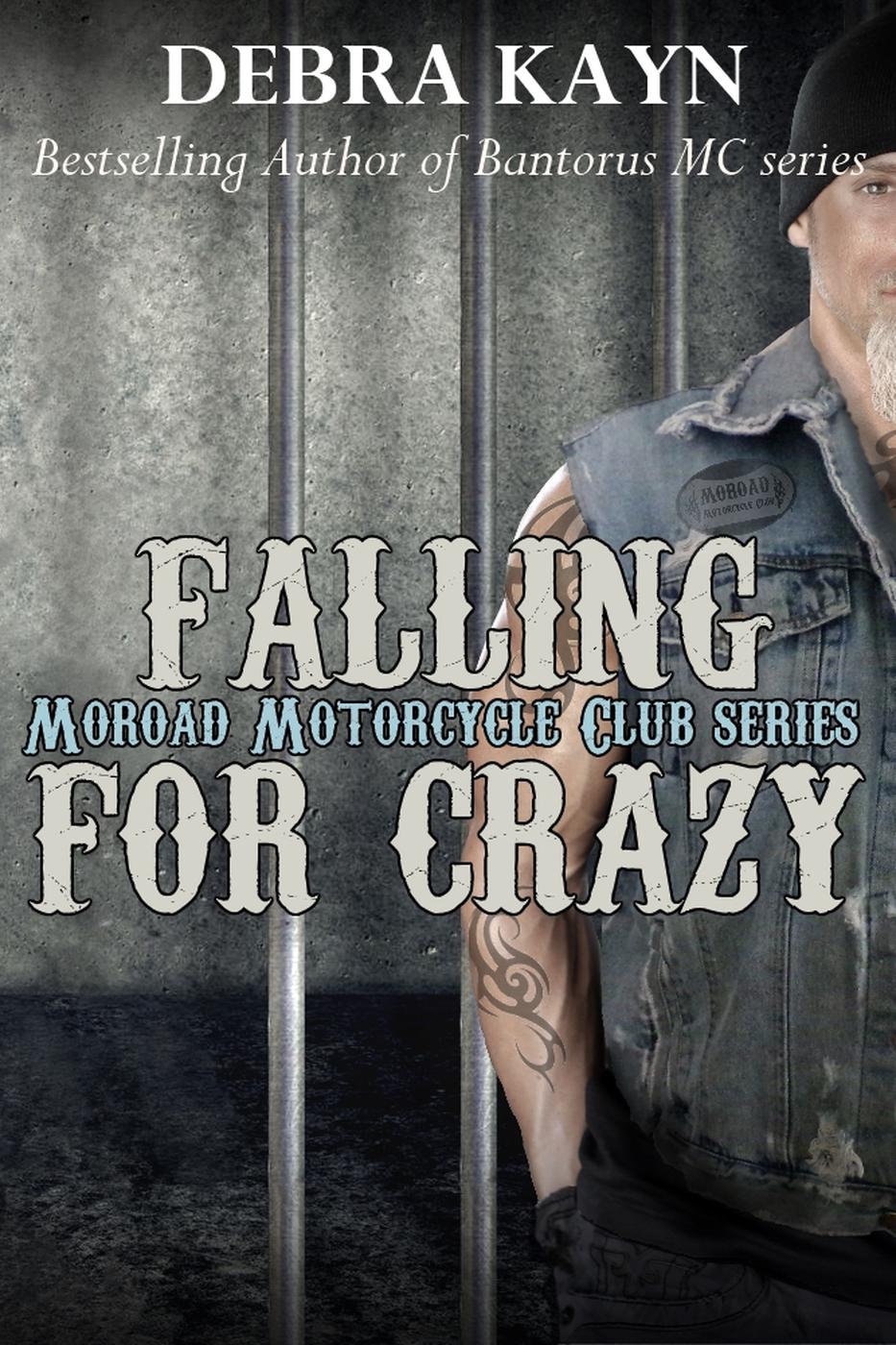 All rights reserved. No part of this book may be used or reproduced electronically or in print without written permission, except in the case of brief quotations embodied in reviews.

All rights reserved. This copy is intended for the purchaser of this e-book ONLY. No part of this e-book may be reproduced, scanned, or distributed in any printed or electronic form without prior written permission from Debra Kayn. Please do not participate in or encourage piracy of copyrighted materials in violation of the author's rights. Purchase only authorized editions.

T
o all the people who have a little crazy in them —
Life is hard. There's sorrow, grief, stress, hardships, loss, devastation, responsibilities and a myriad of other fallacies that plague each of us while we do our best to look at the silver lining in the clouds.

Take the time to have fun. Grab a book and escape into another world for a few hours. Take a walk around your neighborhood. Throw the ball for your dog. Randomly kiss your husband until you're dizzy. Sing at the top of your lungs on the way to work. Hug your babies.

T
o Abby —
Yeah, that's right, I'm writing a dedication to my dog. After so many books I've run out of friends and family. Considering I think my dog is crazy it's only fitting that she gets mentioned. She's half Australian Shepherd and something else. Maybe wolf. She's loyal, but a scaredy-cat. She can hold her bladder for twenty-four hours because she witnessed a pine needle falling in the yard. That's talent. She sprained her ankle jumping off a rock wall in our entertainment area and at this moment, she's faking a limp. Puppies send her running. Cheese brings her to me. She forgets daily who Wheels is when he walks through the door, but goes to him first when she wants a bone. Her favorite thing in the world is riding on the back of the ATV. Physically, she's beautiful. Mentally, she's crazy. Love you, Abby-girl.

W
allace, Idaho —
As most of you know, Federal Idaho where my Bantorus MC and Moroad MC series books are based is set in my hometown of Wallace, Idaho. It's wonderful to live in an area where we take pride in our colorful past, rich history, and mining. Most of all the acceptance of those we call neighbors. Thank you to Ryan Motel, Lux Rooms, Oasis Bordello Museum, Wallace Inn, Rossi Building, Shoshone County Sheriff's Department, Harvest Food, Hecla Mining, Molly B'Damn Motel and the community for adding that special touch to my books.

D
aydream Believer Book Blog
— The support and dedication you give is phenomenal. Thank you for running the Moroad MC Support Group and giving readers a safe place to tear apart my books. Thanks for keeping it
real
, maintaining the
list
, and spreading your love to
epic
levels.

M
oroad MC Support Group
—To all the readers who joined —Between the deep discussions, the back and forth debates, and sharing your feelings about the books, you all have created something wonderful. In the wacky world of publishing, readers came together over their mutual love of books and offered each other understanding, appreciation, and new friends. By far, you're the best group of readers out there!

M
ore Than Words Promotions
— Thank you for taking the stress out of my releases. Your professionalism and promptness make my releases special.

A
siren brought Jacko out of bed. He stood in front of the window, orienting himself to his location. Blue and red lights lit up the concrete block wall, settling him down. He wasn't in a prison cell at Idaho State Penitentiary, but in the bedroom of his apartment above Cleo's Coffee Cave in Federal, Idaho.

The lights and sirens of the sheriff's rig cruised down Main Street after some poor asshole, leaving Jacko alone. He wiped the sweat off his face with his hand and walked naked to the light switch. He hated the dark. He hated enclosures. He hated life.

Despite shrouding the room in light, the walls closed in on him. He dressed, putting on his jeans, socks, boots, and stuffing his pistol inside the hidden pocket in his Moroad Motorcycle Club vest before walking out of the seedy apartment. He hadn't slept four straight hours for months, since Merk, his MC brother, moved out.

The physical exhaustion hammered his legs, weakening the muscles and making them cramp going down the stairs. He stepped outside and inhaled the cool night air. In an hour, the sun would rise above the Bitterroot Mountains and chase the spring chill away.

He was getting damn tired of the cold and wearing most of the clothes he owned when weather permitted a ride between snow flurries and warmer temperatures. He wanted the freedom of leaving, though he'd never go far.

Moroad Motorcycle Club stayed close to Federal, because of the restrictions the court put on each member after their release from prison. He walked down the sidewalk, ignoring his Harley sitting at the curb. Only him, Rash, Paul, Kev, Mayor, and Mister walked out of the state penitentiary without any rules attached to their freedom, because Cam worked a deal with the commissioner to pardon them early.

Unfortunately, Mayor died running the gun chain in a deal that had gone bad. The others stayed close, either to seek safety around the club or because they had nowhere else to go. No family, no friends, no life outside the Cyclone fence of the Idaho State Penitentiary.

Jacko turned at the corner of the street behind Rail Point Bar and headed toward Main Street. He asked himself every day why he stuck around, and the answer was always the same. He had no direction to go, until he killed every son of a bitch who stole Sarah from him, took her to Mexico, and let the sex slave industry kill her.

A rumble brought his head up as a Bantorus Motorcycle Club member rode toward him. He lifted his chin, skipped a few steps, waved his arms, and settled down into a walk as the roar of the engine weaned away. Nobody questioned his reasons for being outside in the early morning hours or bothered him during the daylight.

Everyone believed he was crazy. Half looped. Retarded. Insane.

Hell, they were right.

Once he lost Sarah, he'd gone off the deep end with everyone witnessing his fall. His Moroad brothers, the other gangs in prison, the court system. He used everyone's questions about his mental stability to his favor. In return, he took advantage of other people's weaknesses and received information about who was responsible for Sarah's death.

There were five Reds members and two Los Li members who'd dirtied their hands and touched his woman. He'd already killed five of them while incarcerated.

The last remaining Reds member on his hit list was scheduled for release in a month. Jacko planned to be there to congratulate Quijada on his freedom before he killed him.

That would leave one Los Li member he needed to catch to finish the job. Flores still roamed free, spending half his time in Mexico and the other half reorganizing and recruiting in the United States for the Mexican Mafia.

The asshole was the ringleader who had Sarah kidnaped as she walked from the house she shared with her sister to Jacko's rental. Because he got caught killing the first man who abducted her, he'd spent the next five years in prison until Cam got him out, where he was helpless to go after Quijada without access to the inside.

He wouldn't mind going back to prison. His time spent behind bars had worked to his advantage, but he had to stay free and finish his work on the outside.

The rushing water of the North Fork of the Coeur d'Alene river attracted his attention. He jumped over the hip-high concrete barrier and walked under the viaduct to the river. Anxious to take out Quijada before he even cleansed his body of the scent of piss from prison, Jacko counted the days until he met the fucker face to face.

The river flowed west at a steady pace, bending to the rocks littering its path and following the edge of town. He kicked a rock off the bank, sending it to the bottom of the water. Time was his enemy. He would never rest until everyone responsible paid for taking his woman away from him.

A car door slammed. Jacko gazed left, watching for any trouble. Tourist season hadn't started yet, and the miners took to parking under the interstate and carpooling to work. He pulled out a cigarette and lit the end, wondering what time graveyard shift at the local mine ended.

Fuck, he couldn't even remember the last time he'd worked an honest job outside of helping Merk and his woman, Desiree, at the bar in town.

Unlike the few free Moroad members who worked at the mine, he preferred not working for a living. He lived off the extortion money coming in from the other gangs to keep the Moroad members in prison safe.

Smoke from his cigarette curled in front of him, disappearing in the breeze. He stretched his legs and crossed his boots. The cold slab of concrete underneath his ass a reminder of prison life. He could stand and escape the unforgiving surface, unlike when he had his choices ripped away from him as he served time.

A dark shadow ran alongside the river on the opposite bank. He squinted into the darkness. Unless bears started moving on two legs while he was locked up, he wasn't the only person slipping around in the dark.

"Hey, get back here," yelled a male voice.

The shadow stopped, grew smaller, and disappeared behind a cluster of bushes. Jacko flicked his smoke into the river and tried to find the man amongst the parked cars about a hundred yards to his left.

The echo of rapid footsteps reached him. He stayed sitting on the barrier.

The man crossed the walk bridge, jogging straight for him. Jacko slipped his hand inside his vest and wrapped his fingers around the butt of his pistol.

The man stopped twenty feet from Jacko. "Hey, did you see a woman run by here."

"Nope." Jacko gave his head a good shake and whispered. "Did you see the dragons?"

Jacko leaned back, waved his free arm, and kicked his leg. "Whoa. Fuckin' communist dragons. Don't mess with those motherfuckers. They'll mess you up."

The man shook his head, mumbled, turned around, and walked back to his car. Jacko whistled a song he'd heard playing on the radio in Rail Point Bar and waited the man out.

Ten minutes later, the man pulled out from under the viaduct and drove out of town. Jacko moistened his lips. He had two ways to get across the river. The walking bridge would cost him time, and the woman hiding in the bushes could escape. He peered down at the river, spotting the boulders sticking up out of the water. The craziest thing to do would be to skip the river.

"Let's go swimming," he mumbled to himself.

At the edge of the water, he hopped out on the first good-size rock and balanced. Without the reflection of the moon at water level, he estimated the distance to the next boulder and almost overshot his target. He windmilled his arms, staying on his feet.