Read Falling for Him 4 (Rachel and Peter in Love) Online

Falling for Him 4 (Rachel and Peter in Love) 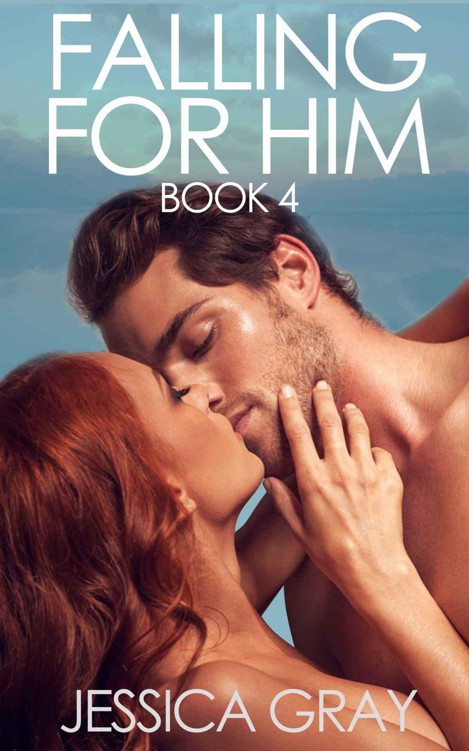 This book is copyrighted and protected by copyright laws.

No part of this publication may be reproduced or transmitted in any form or by any means, electronic, mechanical, photocopying, recording, or otherwise without the prior written permission from the author.

All characters, names, and places in this book exist only within the author’s imagination.  Any resemblance to actual persons or locations is pu
rely coincidental.

Lara Bishop stepped from the taxi and took a calming breath as she looked up at the building where Peter lived. She made her way to the front door, holding her purse tightly against her abdomen. When she stood in front of the door, her mind replayed everything that had transpired between herself and Peter.

She had come here, to do what would probably be the hardest thing she had done in her life. As her mind replayed the actions that had brought her to this place, she was ashamed of herself. Just thinking back to what she had done,
made her blush, her cheeks turning red in embarrassment and shivers crept down her spine.

H
er mind drifted over bits and pieces of her interaction with Peter and his girlfriend, Rachel. Looking at her actions, it was as if she was watching a horror story unfold. The things she had done to that woman were beyond imagination!

W
hen she thought about what she’d done to poor Peter, she questioned whether she’d ever truly understood what love was. How could someone who professed to love another, ever willingly carry out the abominable acts she had. She was so ashamed of herself!

Lara Bishop considered herself an intelligent, beautiful woman. She had attended the best schools possible, and her father was considerably wealthy. Lara had always prided herself on being above those around her
in looks, actions, and abilities.

How far had she sunk?
She had acted out like an immature, spoiled little girl who threw a temper tantrum when things didn’t go her way. No worse, like a street urchin for crying out loud! Hiding in a mouse hole suddenly seemed like a good idea.

The urge to bury her head in the sand and hope that things would fix themselves was strong. But she couldn't do that. She was here to right the wrong
she’d done.

She had come here to ask for forgiveness.

Lara knew that there was no way to undo the things she’d done and the actions she had caused. Still, she hoped that her honest apology would help Peter and Rachel put the past behind them and find their happily ever after.

Lara
took one last calming breath like she had learned at the clinic and rang the bell. Nothing. She listened for movement on the other side of the door, and when nothing happened, turned towards the street, but stopped. She’d come this far, might as well try one more time. It was her only chance, because she probably wouldn’t find the strength to come again another day.

She
’d used up all her courage to get this far, and now cursed herself for not thinking things through. If he didn’t open, she was lost. Lost to her remorse and the attacks of guilt and shame. She wanted to get things done. Right now. Before her courage could fail her. Therefore she depressed the doorbell again in one last attempt before she’d run off.

H
er shoulders sighed in relief momentarily when she heard the sound of the deadbolt being turned from the inside.

Just as quickly, tension filled her body
again and every carefully rehearsed phrase disappeared.
Peter is opening the door, and I can’t remember what I need to tell him!

In slow motion, she watched as
the door opened. Her eyes cast downward, when she noticed the bare legs and robe wrapped body of a woman. A woman? Rachel Baker!
Oh my god! Please, not her!

Lara inwardly cringed and her tension ratcheted up to another level. She
’d been hoping Peter would answer the door; at least he didn’t hate her! Mentally bracing herself for the ordeal to come, she raised her eyes to Rachel’s.

The welcoming smile upon Rachel’s face died as she surged backwards and attempted to shut the door in Lara’s face. It was obvious she hadn’t expected to see Lara standing there!

Lara put her hand out in supplication, quickly saying, “Please, Rachel. May I come inside for a few minutes?”

“Give me one good reason why I would be stupid enough to
allow that?” Rachel challenged her, using every ounce of bitchiness she was able to muster up. She looked Lara up and down, mistrust evident in her perusal. And not unwarranted based on past events.

Lara shifted on her feet. Uncomfortable with the confrontation, yet knowing it needed to happen.

Rachel looked at the woman who normally would be dressed to kill in expensive designer clothing, totally inappropriate shoes, and her makeup expertly applied. Today, she was wearing clothing that looked like she had bought it off the rack at one of the big box stores. Save for a little lip-gloss, she was wearing no makeup.

Rachel kept her hand upon the door,
as if she expected the other woman to force her way in. Lara saw Rachel look over her shoulder, scanning the hallway to both sides. She glanced to her left out of the window and could just make out the taillights of the taxi disappearing around the corner of the next street.

As Lara watched Rachel’s face, she realized the woman was probably looking for the men in the white coats, come to take her back. She was going to be very disappointed as Lara was most definitely alone, and now that the taxi had departed, without transportation.

Rachel brought her gaze back to Lara and silently measured her.

Lara recognized the look for what it was – distrust.
Well, it’s not like you’ve given her any reason to trust you in the past!

“Please? Just for a few minutes?”
Lara pleaded once again. She glanced through the crack in the door, hoping to see Peter, but there was no one.
Had Peter already left for work?

Rachel looked at the woman standing on the front step with a disgusted look upon her face, "Lara
you have the nerve to come here!?"

"Rachel, please.”
Lara hurried to find a reason for Rachel to let her into the house. Seeing Rachel’s eyes narrow, and fearing she was about to close the door, she quickly offered, "I came to apologize."

Rachel raised her eyebrows
in disbelief.

Lara’s heart sank.
Of course, she wouldn’t believe me. Why should she
?

Images of her past actions towards this woman crossed her mind. She blushed with shame once again.  “Please. I am here to apologize to you and Peter.”

Rachel let her inside reluctantly and s
aid "Peter is in the bathroom. Wait right here." She gave her another measured glance and then reluctantly left her standing just inside the apartment, the front door slowly shutting behind her.

Lara
observed Rachel disappear down the hallway she knew led to the master bedroom and ensuite bathroom. She slowly walked into the front sitting room and lowered herself to the small couch.

While she waited on Rachel and Peter to return, her mind drifted back to a day six months prior; that fateful day that had forever changed her life.  She saw herself standing on top of an office building, ready to jump!

Lara was standing on the outside ledge that ran around the top of the building. There were small cutouts in the ledge and police officers stood on the inside of those openings on either side of her, trying to convince her to let them pull her back inside the retaining wall.

She
had taken the elevator up to the fifteenth floor and then the stairs to the roof before climbing over the small wall and onto the two-foot wide ledge.

The wind had come up slightly in the last few minutes so she was leaning against the building and trying to get control of her thoughts. She
’d awakened earlier this morning, her mind confused and her thoughts unorganized.  For the very first time in her life, she hadn’t gotten what she wanted. Peter!

The mo
re she thought about that fact, the more she realized that from the moment Peter had broken up with her, her life had begun to fall apart. Everything had gone wrong. Totally wrong.

She -
Lara Bishop - the beautiful, intelligent, successful woman others envied, had transformed into a frantic fury. The green-eyed monster had taken over her life and her mind. She awakened this morning and realized that she didn’t like herself. At all!

Shoot, if the authorities knew even half of what she’d done, she would have faced public humiliation and a length
y prison sentence! And it was no less than she deserved!

If her father, or his board of directors, ever
found out, that dark secret would destroy her reputation. She’d never be able to look her father or her friends in the eyes again.

The longer she thought about the consequences of her actions should anyone find out what she’d done, the more hopeless it seemed.
She had mindlessly driven to the building and walked out on the roof, looking for an escape from the emotions roiling through her mind.

She glanced down at the street below, unaffected by the offers and pleas to let them help her.
Perhaps it was best to jump! She would spare herself the public humiliation. She would be able to get rid of those painful feelings of jealousy and guilt. Death seemed like a good idea.

How could the only guy she ever
really wanted love someone else?
Peter was supposed to be with her!

When Peter arrived, she
had spewed all the unvented emotion inside her at him. “You!” Lara had shouted accusations at him, screaming hysterically, and crying at the same time.

The sight of Peter leaning out the window cut into the retaining wall had caused something to snap inside her.  She’d vented all of her frustrations and anger at him; telling him of the hurt he
’d caused her and begging him through her tears to make it right.

“Lara, I can’t understand you. Come back inside the wall so we can sit down and discuss this. Please?” Peter had extended his hand towards her, but she had shaken her head and backed away from him.
She couldn’t trust him anymore. Could she?

Lara pointed her finger at him and screamed again, “You ruined my life! I truly loved you and you threw everything away just to be with that bitch Rachel!”

Lara watched as someone she couldn’t see spoke to Peter before he answered her. Then she heard Peter say, “Yes, Lara. I understand. Please come inside so we can talk about all the things I did wrong.”

Finally, her
drastic measures reached him. Did he accept that it was all his fault? Now that she had his attention she would convince him that they belonged together. She needed him.

But what if it was only a trap? What if the minute she reached safety, he never wanted to speak to her again? Then this would all be for naught!

MOB BOSS 2 by Monroe, Mallory
The Black History of the White House by Clarence Lusane
Seduce Me by Jo Leigh
Dark Under the Cover of Night (The Kingdom of the East Angles Book 1) by Jayne Castel
Everything I Never Told You by Celeste Ng
Killing Secrets by Docter, K.L
Seduce Me Sweetly (Heron's Landing Book 1) by Iris Morland
The LeBaron Secret by Birmingham, Stephen;
STORM: A Standalone Romance by Glenna Sinclair
This Year You Write Your Novel by Walter Mosley
Our partner