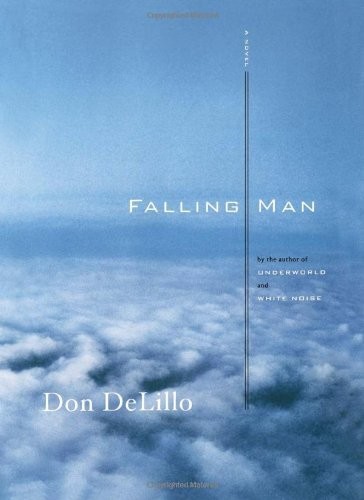 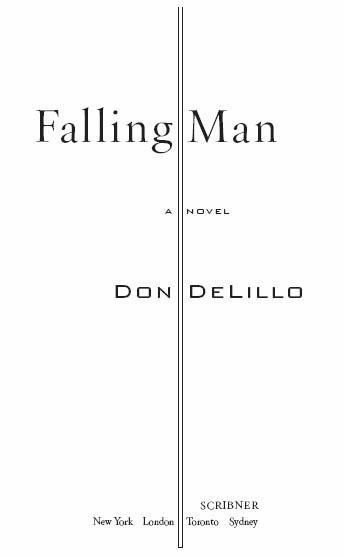 All rights reserved, including the right to reproduce this book or portions thereof in any form whatsoever. For information address Scribner Subsidiary Rights Department, 1230 Avenue of the Americas, New York, NY 10020.

SCRIBNER and design are trademarks of Macmillan Library Reference USA, Inc., used under license by Simon & Schuster, the publisher of this work.

It was not a street anymore but a world, a time and space of falling ash and near night. He was walking north through rubble and mud and there were people running past holding towels to their faces or jackets over their heads. They had handkerchiefs pressed to their mouths. They had shoes in their hands, a woman with a shoe in each hand, running past him. They ran and fell, some of them, confused and ungainly, with debris coming down around them, and there were people taking shelter under cars.

The roar was still in the air, the buckling rumble of the fall. This was the world now. Smoke and ash came rolling down streets and turning corners, busting around corners, seismic tides of smoke, with office paper flashing past, standard sheets with cutting edge, skimming, whipping past, otherworldly things in the morning pall.

He wore a suit and carried a briefcase. There was glass in his hair and face, marbled bolls of blood and light. He walked past a Breakfast Special sign and they went running by, city cops and security guards running, hands pressed down on gun butts to keep the weapons steady.

Things inside were distant and still, where he was supposed to be. It happened everywhere around him, a car half buried in debris, windows smashed and noises coming out, radio voices scratching at the wreckage. He saw people shedding water as they ran, clothes and bodies drenched from sprinkler systems. There were shoes discarded in the street, handbags and laptops, a man seated on the sidewalk coughing up blood. Paper cups went bouncing oddly by.

The world was this as well, figures in windows a thousand feet up, dropping into free space, and the stink of fuel fire, and the steady rip of sirens in the air. The noise lay everywhere they ran, stratified sound collecting around them, and he walked away from it and into it at the same time.

There was something else then, outside all this, not belonging to this, aloft. He watched it coming down. A shirt came down out of the high smoke, a shirt lifted and drifting in the scant light and then falling again, down toward the river.

They ran and then they stopped, some of them, standing there swaying, trying to draw breath out of the burning air, and the fitful cries of disbelief, curses and lost shouts, and the paper massed in the air, contracts, resumés blowing by, intact snatches of business, quick in the wind.

He kept on walking. There were the runners who’d stopped and others veering into sidestreets. Some were walking backwards, looking into the core of it, all those writhing lives back there, and things kept falling, scorched objects trailing lines of fire.

He saw two women sobbing in their reverse march, looking past him, both in running shorts, faces in collapse.

He saw members of the tai chi group from the park nearby, standing with hands extended at roughly chest level, elbows bent, as if all of this, themselves included, might be placed in a state of abeyance.

Someone came out of a diner and tried to hand him a bottle of water. It was a woman wearing a dust mask and a baseball cap and she withdrew the bottle and twisted off the top and then thrust it toward him again. He put down the briefcase to take it, barely aware that he wasn’t using his left arm, that he’d had to put down the briefcase before he could take the bottle. Three police vans came veering into the street and sped downtown, sirens sounding. He closed his eyes and drank, feeling the water pass into his body taking dust and soot down with it. She was looking at him. She said something he didn’t hear and he handed back the bottle and picked up the briefcase. There was an after-taste of blood in the long draft of water.

He started walking again. A supermarket cart stood upright and empty. There was a woman behind it, facing him, with police tape wrapped around her head and face, yellow caution tape that marks the limits of a crime scene. Her eyes were thin white ripples in the bright mask and she gripped the handle of the cart and stood there, looking into the smoke.

In time he heard the sound of the second fall. He crossed Canal Street and began to see things, somehow, differently. Things did not seem charged in the usual ways, the cobbled street, the cast-iron buildings. There was something critically missing from the things around him. They were unfinished, whatever that means. They were unseen, whatever that means, shop windows, loading platforms, paint-sprayed walls. Maybe this is what things look like when there is no one here to see them.

The sky was lighter here and he could breathe more easily. There were others behind him, thousands, filling the middle distance, a mass in near formation, people walking out of the smoke. He kept going until he had to stop. It hit him quickly, the knowledge that he couldn’t go any farther.

He tried to tell himself he was alive but the idea was too obscure to take hold. There were no taxis and little traffic of any kind and then an old panel truck appeared, Electrical Contractor, Long Island City, and it pulled alongside and the driver leaned toward the window on the passenger’s side and examined what he saw, a man scaled in ash, in pulverized matter, and asked him where he wanted to go. It wasn’t until he got in the truck and shut the door that he understood where he’d been going all along.

It wasn’t just those days and nights in bed. Sex was everywhere at first, in words, phrases, half gestures, the simplest intimation of altered space. She’d put down a book or magazine and a small pause settled around them. This was sex. They’d walk down a street together and see themselves in a dusty window. A flight of stairs was sex, the way she moved close to the wall with him just behind, to touch or not, brush lightly or press tight, feeling him crowd her from below, his hand moving around her thigh, stopping her, the way he eased up and around, the way she gripped his wrist. The tilt she gave her sunglasses when she turned and looked at him or the movie on TV when the woman comes into the empty room and it doesn’t matter whether she picks up the phone or takes off her skirt as long as she’s alone and they are watching. The rented beach house was sex, entering at night after the long stiff drive, her body feeling welded at the joints, and she’d hear the soft heave of surf on the other side of the dunes, the thud and run, and this was the line of separation, the sound out there in the dark that marked an earthly pulse in the blood.

In the Woods by Merry Jones
The Last Starship by Marcus Riddle
Lie to Me (an OddRocket title) by Brahm, Suzanne
Richard by Aelius Blythe
Shut Up and Model for Me by Iris Blaire
Super in the City by Daphne Uviller
Home Land: A Novel by Sam Lipsyte
A Brief Guide to Star Trek by Brian J Robb
Giants by Heppner, Vaughn
Nine Gates by Jane Lindskold
Our partner