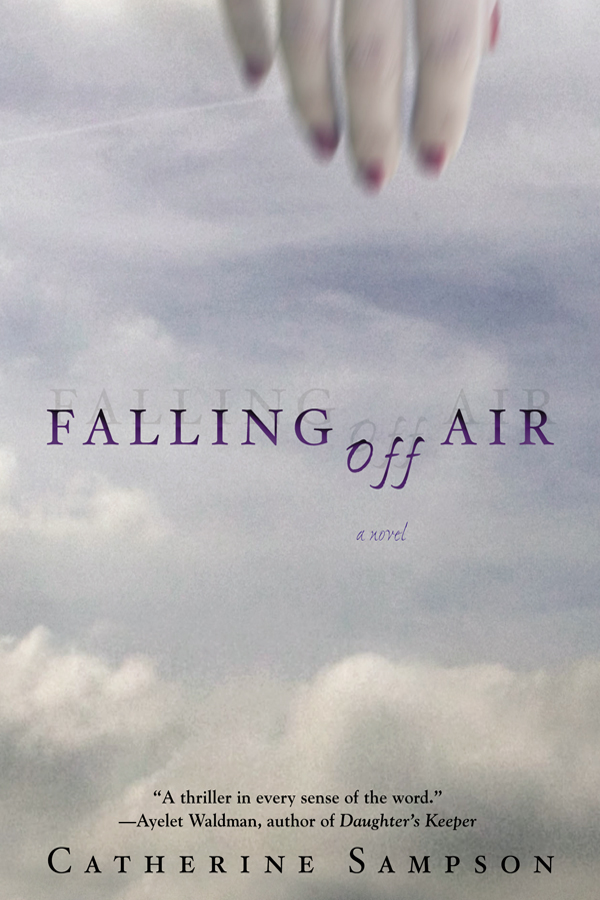 I am about to pull the curtains when,
at the margin of my vision,
a woman falls out of the sky.

I do not see how it began. All I see is that she falls, feet first but tipping forward, arms stretched out as if to break
her fall, her clothes as chaotically twisted and tossed as the rain, and the weight of her body carrying her down through
the currents of air straight to the earth like an anchor. For a moment my brain cannot register what my eyes clearly see,
what my ears hear: a scream that tangles with the whine of the wind so that they become one miserable chord. The moment she
hits the ground the sound becomes thin again, just the wind on its own once more.

ACCLAIM FOR
FALLING OFF AIR

“FALLING OFF AIR is a first-rate thriller that is also a parable for the modern age, a compelling exploration of love, ambition,
and misguided ideals wrapped in exquisite prose. I devoured this book whole.”

—Amy Gutman, author of
The Anniversary
and
Equivocal Death

“Definitely a talent to look out for.”

“The novel possesses a unique flavor, with moments of humor and an enjoyable suspense element that will appeal to mystery
fans. Recommended.”

“The mystery and its solution are satisfyingly convoluted. Fans of British mystery will enjoy this one.”

“This engaging amateur sleuth tale is kept fresh by the beleaguered heroine who finds her own community is ready to devour
her as a wounded piranha.”

This book is a work of fiction. Names, characters, places, and incidents are the product of the author's imagination or are
used fictitiously. Any resemblance to actual events, locales, or persons, living or dead, is coincidental.

Excerpt from
Out of Mind
copyright © 2005 by Catherine Sampson

A Preview of
Out of Mind

For James
and
For Martha

I
am very grateful to several people for their help with the writing of this book. Elizabeth Aylett advised me on chronic fatigue
syndrome. Jennifer Schwerin and Nancy Fraser gave me technical guidance on filmmaking. Martha Huang read drafts tirelessly
and ruthlessly. James Miles, my husband, gave me his constant support. My parents, John and Joan Sampson, gave me and our
three children shelter from SARS at a critical stage of preparing the manuscript. I am deeply indebted to Amanda Preston,
my agent, and to Sarah Turner and Amy Einhorn, my editors.

T
HE shouting starts at around seven in the evening. A hot day, an oppressive dusk, and my neighbors the length of the street
fling their windows wide open in the vain hope of admitting a breeze. The air smells singed. At first the voices are no more
than a whisper. I have gone to the front of the house to put out the rubbish and, this being prime soap time, I assume the
noise is scripted and broadcast. One of the voices is male, one female, but this early in the argument restraint still keeps
them low if urgent, and I cannot tell one word from another even if I wanted to.

Within half an hour, shrieks of indignation and hoots of ridicule are bouncing off our terraced, slate-clad walls, then back
onto the curlicued red-brick mansions opposite. The voices seem to be amplified in the still air, and accusation and counteraccusation
flow in through the open windows undistorted and devastating. By this point I am kneeling on the floor wrestling the twins
into their pajamas but I am soon distracted by the yelling. I sit back on my heels to listen, letting go of Hannah, who crawls
off cheerfully, believing herself for once victorious in the nightly struggle to go to bed naked. I am tempted to go to the
window to get a better sense of where the voices are coming from, but they have enough problems without me sticking my nose
in.

“Of course you don't understand, you selfish bastard,” a woman screams, “you won't let me …” Here her voice continues, something
about spending money, but a man's voice is overlaid, calling the woman a bitch repeatedly until she falls silent. Unchallenged
now by her, he gains in volume. “You're a lying, blood-sucking whore,” he yells, his voice breaking with emotion, muttering
something that I cannot hear, then roaring, “What the fuck's been going on in my house?”

“Your house? Your …” She—whoever she is—comes back at him enraged, but then a third voice intervenes, the light, anxious tones
of a child, and there is no more screaming.

I grimace, my mind's eye in someone else's sitting room, windows open, a frightened girl or boy summoning the courage to say
something, anything, to shut his parents up. The argument is ugly even at a distance. The red cloud of rage lifts, of course,
apologies can be made, accusations retracted. In this case, however, it is difficult to see how life can continue as normal,
unless calling your wife a lying whore is normal.

My neighbors, both sides of the street, are a modest lot. They don't yell in public, they don't venture into the street naked,
and God forbid they'd smile a hello to a stranger, but weather like this strips everyone down. We have been promised rain,
but instead it just gets hotter and hotter, the air heavier and heavier for three days in a row. When the rain comes, it will
empty the heavens.

I was depositing William in his crib as the first clap of thunder broke above us and the rain descended like a waterfall,
drumming suddenly against the window like someone trying to get in. I wondered whether our house was waterproof. It seemed
unlikely that such a flimsy structure could be anything more than splashproof. It is perhaps overstating it even to call it
a house. The real estate agent talked about “council house chic.” God knows how long it took him to dream that one up. It's
like a little flat turned vertical, standing upright on its own patch of earth, its walls barely solid enough to hold it up.
There are two feet of paved ground in front with a low concrete wall that has no function except to serve as our boundary,
and a tiny garden at the back fenced with flimsy wood and chicken wire. Inside, mostly by virtue of its size, the house is
cozy. I've had no time to do much to it, so it remains much as it was when I bought it, complete with garish paintwork and
stained carpets. The best and warmest thing about it is an open fireplace. The agency advertised it as a “period feature,”
and it is indeed a Victorian fireplace. Of course when the house was built forty years ago that particular Victoria was long
gone.

This is not the house I would have chosen. It is the house I could afford. A single income, double child-care bills, and zero
windfall on the horizon all added up to the smallest mortgage I could find. Our house and its little string of neighbors are
a gray British version of shanty-town shacks compared to the red-brick Victoriana that graces the opposite pavement. They
have intruder alarms and leaded windows like jewels in their heavy wooden doors. I have a doorbell that plays “Greensleeves”
off-key and a cracked window at the back where next door's eleven-year-old hit it with a tennis ball.

By eight o'clock I'd fed, bathed, and wrestled Hannah and William into their cribs, and plugged bottles of milk into their
rosebud mouths. I felt as though I'd run a marathon. I wiped the sticky remains of the twins' teatime from my sleeves, poured
myself a glass of merlot, and twitched the sitting-room curtain open, perching on the arm of the chair to watch the storm.
My back was aching and I rolled my shoulders, feeling the crunch at the base of my neck, trying to ease the stress. The combined
weight of the twins was now much the same as that of a baby elephant. Outside the ominously oppressive day had given way to
an angry night. The trees and shrubs in the gardens opposite shuddered, and rain fell in great swathes through the orange
darkness, tossed and twisted by the wind.

The family who lived opposite hadn't pulled their curtains shut yet, and I could see the cool blue of their high walls, the
brass picture lights above framed prints. I frowned. Was it my imagination or could I hear voices again, straining over the
storm. Surely everyone would have shut their windows. Unless, I thought, one was too distraught to notice a gale howling outside.
A fork of lightning lit up the sky and then, just a moment later, a clap of thunder burst and shook my frail little house.
Still, unlikely as it was, my ears caught at fractions of words, at shrieks and wails that seemed too human to belong to the
storm. I gazed up the street, then down it, but the rain had driven everyone inside.

I am about to pull the curtains and shut out the weather when, at the margin of my vision, a woman falls out of the sky. I
do not see how it began. All I see is that she falls, feet first but tipping forward, arms stretched out as if to break her
fall, her clothes as chaotically twisted and tossed as the rain, and the weight of her body carrying her down through the
currents of air straight to the earth like an anchor. For a moment my brain cannot register what my eyes quite clearly see,
what my ears hear: a scream that tangles with the whine of the wind so that they become one miserable chord. The moment she
hits the ground the sound becomes thin again, just the wind on its own once more. The weather and everything else of no consequence
is fixed in my mind for good now because of that moment of violence; scar tissue forming around the memory.

I stood up in agitation, my heart pounding, eyes wide, staring at the heap in the pathway of the house on the other side of
the road. What should I do? What could I do? Energy flooded to my muscles and I ran, flinging open my front door, damp air
filling my lungs. I reached her, squatted down, had to force myself to look closely. Until that point some part of me believed
that the wind and the rain must have played a trick on my ears and on my eyes, but it was as I feared. The broken heap was,
or had been, a woman. She was wearing something flowing and loose that was now caught around limbs that had broken on impact,
and long hair covered her head, her face turned into the ground. The rain was driving against the top of my own head, pouring
down into my eyes and I had to peer, eyes half shut, down at her. It seemed to me that another, darker, liquid was seeping
from under her head, but I couldn't be sure. I couldn't tell if she was breathing so I laid my fingertips lightly on her back
to see whether I could sense a rise and fall. I could detect nothing.