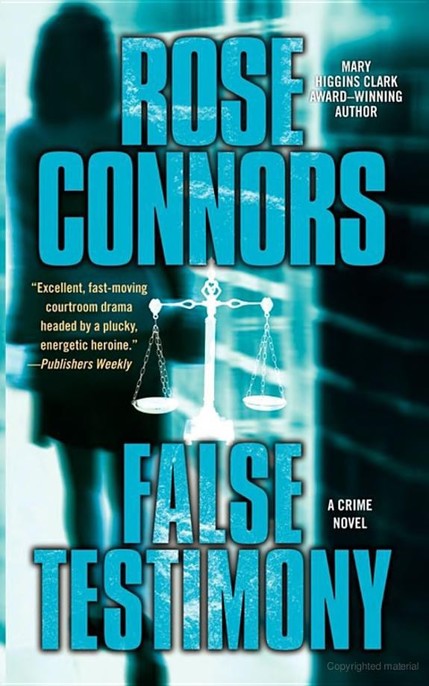 SCRIBNER
and design are trademarks of Macmillan Library Reference USA, Inc., used under license by Simon & Schuster, the publisher of this work.

Sincere thanks to the literary dream team: my editor, Sarah Knight, and my agent, Nancy Yost.

Thanks also to those individuals who contributed generously to the Cape Cod & Islands United Way in exchange for the right to christen a character.

And finally, thanks to the members of my weekly writing circle: Sara Young, Pauline Grocki, Penny Haughwout, and Maureen Hourihan—wordsmiths one and all.

A person of interest. That’s what local authorities dubbed Charles Kendrick, the senior United States Senator from the Commonwealth of Massachusetts. He wasn’t a target of the investigation, they told him. He was merely an individual believed to have information relevant to the search.

And he did. Twenty-five-year-old Michelle Forrester was a member of his D.C. staff. He hired her more than three years ago, just after she graduated from the University of Virginia with dual degrees in government science and drama. An ambitious and disarmingly attractive young woman with obvious political aspirations of her own, she quickly became Senator Kendrick’s preferred spokesperson. For the past year—while rumors ran rampant about his planned bid for the Democratic nomination—Michelle Forrester alone fielded questions at his frequent public appearances. She enabled the Senator to say his piece at each event and then make a dignified—perhaps even presidential—exit.

This past Thursday, Michelle handled the members of the media after the Senator addressed a standing-room-only crowd at Cape Cod Community College in Hyannis. The evening news featured a poised and charming Michelle entertaining endless inquiries from local reporters, joking and laughing with them easily and often. She stayed until their voracious journalists’ appetites were satisfied, until the last of their detailed and often repetitive questions was answered. She extended Senator Kendrick’s sincere thanks to all of them, for their attendance and their attention, before she left the auditorium.

And then Michelle Forrester vanished.

She was due at her parents’ home in Stamford, Connecticut, the next day to help with preparations for a cocktail party to be held that evening in honor of her father’s sixtieth birthday. She didn’t show up—not for the preparations and not for the party. She was expected back at work in D.C. first thing this morning, her office calendar jammed with appointments from eight o’clock on. She didn’t show there, either. And though her worried parents had been calling both Massachusetts and Connecticut authorities all weekend, it wasn’t until her no-show at work that the search began in earnest.

Postpone it
. That’s what I advised when Senator Kendrick called my office at ten
A
.
M
. He’d stayed on the Cape after Thursday’s speech, intending to work by phone and fax through the holidays from his vacation home in North Chatham. The Barnstable County District Attorney’s Office called his D.C. number first thing this morning and his executive secretary phoned him right away with the message. It was from Geraldine Schilling—the District Attorney herself—wanting to set up a time when she might ask him a few questions. Today, if at all possible.

Senator Kendrick made it clear to me from the outset that he wasn’t seeking formal representation. He simply wanted to know if one of the lawyers in our office would be available by telephone later in the morning in case he needed a word of advice during his interview. He didn’t anticipate a problem, he assured me more than once. He was calling only out of an abundance of caution.

Twenty-four hours,
I told him. Of course you’ll cooperate with the investigation, and of course you’ll do it promptly; time is paramount in these matters. But you shouldn’t speak to the DA—or to any other representative of the Commonwealth, for that matter—without an attorney at your side. He was quick to inform me that he
is
an attorney—Harvard-trained, he added—whereupon I recited my personal version of the old adage: Never mind the fool; the lawyer who represents himself has a certifiable moron for a client.

Answer questions tomorrow,
I urged. Spend this afternoon in my office, preparing, and we’ll go to the District Attorney together in the morning. That way, if her questioning takes a direction it shouldn’t, I’ll be the one to hit the brakes. You’ll remain the willing witness, reluctantly accepting advice from your overly protective attorney.

Senator Kendrick’s laughter took me by surprise. I wasn’t trying to be funny. After a good chuckle, he thanked me for my time. And before I could answer, I was listening to a dial tone.

“Good of you to join us, Martha.” Geraldine Schilling is the only person on the planet who calls me Martha. And she knows damned well I’m not here to join anybody. Charles Kendrick called me a second time—ten minutes ago, at one-thirty—because he’s worried. And he should be.

“Party’s over, Geraldine. No more questions.”

“Attorney Nickerson can be a bit rude.” Geraldine presses an index finger to her cheek and directs her observation exclusively to Senator Kendrick, as though I’m not in the room. “I should have trained her better,” she adds. She sounds almost apologetic.

Geraldine “trained” me for a solid decade, when I was an ADA and she was the First Assistant. If she’d done the job as she intended, I’d be a hell of a lot worse than rude. I’d also still be a prosecutor, not a member of the defense bar. I lift her black winter coat from the back of an upholstered wing chair in the corner and hold it out, letting it dangle from two fingers. “Adios,” I tell her. “You’re done here.”

She accepts the heavy coat but doesn’t put it on. Instead, she takes a pack of Virginia Slims from its inside pocket and then drapes it over her arm. She tamps a beige cigarette from the pack, shakes her long blond bangs at me, then turns to the Senator and arches her pale eyebrows. She seems to think he might override my decision. She’s mistaken, though; she trained me better than that.

“You’re done,” I repeat. “Senator Kendrick spoke with you voluntarily this morning but he’s not doing that anymore. Not at the moment, anyway. He called his attorney. That’s me. This is his home. And I’ve asked you to leave.”

“Marty, is that really necessary?” Senator Kendrick is seated on his living room couch, a deep-maroon, soft leather sectional. Behind him, through the floor-to-ceiling windows, is a heart-stopping view of the winter Atlantic. His long legs are crossed—in perfectly creased blue jeans—and his starched, white dress shirt is open at the collar, sleeves rolled up to the middle of his forearms. His gray-blue eyes mirror the choppy surf, yet he seems far more relaxed than he should be under the circumstances.

“Take a look outside,” I tell him, pointing to a pair of mullioned windows that face the driveway. “And then you tell me if it’s necessary.”

He stands, sighing and looking taxed by the effort, and crosses the antique Oriental carpet to the dark, polished hardwood at the perimeter of the vast room. I follow and stop just a few steps behind him, eyeing his chiseled profile as he parts the curtains and leans on the sill. He’s silent for a moment as he gets a gander of the scene that greeted me when I arrived. “Standard procedure?” he asks at last.

Four vehicles occupy the crushed-shell driveway, all facing the closed doors of the dormered, three-car garage. The shiny Buick is Geraldine’s; she gets a new one every two years without fail, always dark blue. The ancient Thunderbird in desperate need of a trip to the car wash is mine. The enormous gray Humvee, I can only presume, is the Senator’s. And the patrol car belongs to the Town of Chatham. Two uniforms stand in front of it, leaning against its hood and talking, their breath making small white clouds in the cold December air.

The Kendrick estate sits on a point, a narrow spit of land that juts out into the Atlantic. It has a solitary neighbor, a small bungalow, to the north. Otherwise, the Kendricks enjoy exclusive use of this strip, the front and sides of their spacious house bordered by nothing but open ocean. The cops are in the driveway for a reason, not passing through on their way to someplace else. The Kendrick estate isn’t on the way to anyplace else.

“The one closest to us is the Chief,” I tell the Senator. “Ten bucks says he’ll shoot the lock off your front door if your friend the DA here presses the right button on her pager.”

Senator Kendrick pulls the curtains back together and turns away from the windows to face Geraldine. She dons her coat as she stares back at him, transferring her still unlit cigarette from one hand to the other as she threads her arms through the coat’s tailored sleeves. “Senator,” she snaps, her tone altogether different than it was just moments ago.

He stiffens beside me and turns my way, but I stare at Geraldine as her deep green eyes bore into him. “We’ve barely begun to check out your story,” she says, “and already, parts of it don’t fly.”

He takes a step toward me but still I don’t look at him. Since I’m the only person in this room who hasn’t heard his story, there’s not a hell of a lot I can offer.

“Shut up, Senator.” The utter shock of my command renders him compliant—for the moment, at least. Still, I keep my eyes fixed on our District Attorney. She carries little more than a hundred pounds on her five-foot-two-inch frame, but there’s not a tougher DA in the Commonwealth. Geraldine Schilling is no lightweight.

I take my cell phone from my jacket pocket and flip it open as I walk toward the kitchen—and Geraldine. “At this point,” I tell her, “you’re nothing more than a common trespasser.”

“And
I’ve
got the Chief on speed-dial too.”

She laughs again, louder this time, but she moves toward the kitchen door. She pauses, digs out a lighter from her coat pocket, and ignites the tip of the cigarette now pressed between her well-glossed lips. She opens the inner door, sucks in a long drag as she reaches for the outer one, and then blows a steady stream of smoke over her shoulder, her smoldering green eyes moving from mine to the Senator’s. “Mark my words,” she says to both of us. “I’ll be back.”

Marna by Norah Hess
My Heart Belongs to You (Medieval Romance Trilogy Book 3) by Bale, Leigh
The Perplexing Theft of the Jewel in the Crown by Vaseem Khan
The Quantum Objective by F. Habib
Any Which Wall by Laurel Snyder
The Dividing Stream by Francis King
In Sheep's Clothing by Rett MacPherson
Black and White by Zenina Masters
The Machine Gunners by Robert Westall
Out of Sorts by Aurélie Valognes
Our partner