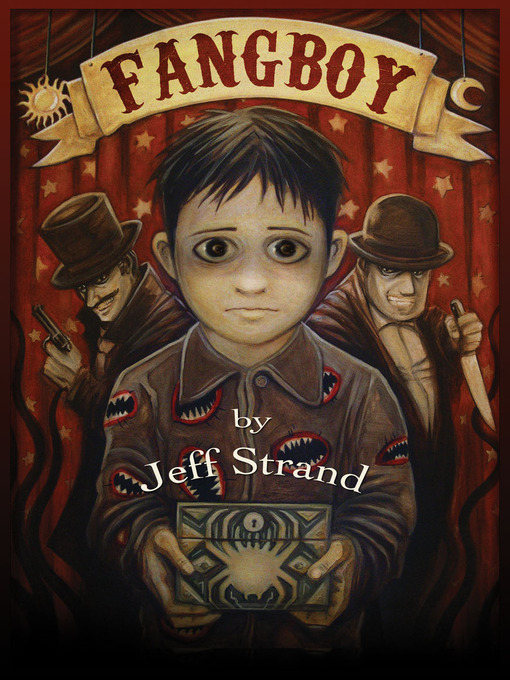 This book is a work of fiction. Names, characters, places and incidents are either a product of the author’s imagination or are used fictitiously. Any resemblance to actual events, locales or persons, living or dead, is entirely coincidental.

Fangboy
is not a children’s book, but it’s sort of inspired by the books I loved as a kid. So I’m dedicating it to the following authors who would probably rather not be associated with this novel, even if they’re deceased:

Super-special thanks to Tod Clark, Terri Garey, Michael McBride, Rick Moschgat, Elizabeth White, and Rhonda Wilson for their feedback, even the feedback that wasn’t “You are AWESOME!!!”

Though the story is probably apocryphal, it is said that Fangboy twisted around in the womb and emerged from his mother mouth-first, with his glistening sharp teeth the first sight of him to greet the world. Neighbors did indeed report a horrified scream from the midwife, who ran out into the front yard shouting something barely intelligible that might have been “
The devil is here! The devil is here!
” But when speaking of this incident years later, at least two of the neighbors insisted that the midwife clawed her own eyes out in an attempt to un-see what she had witnessed, which is incorrect and easily verified, so it’s entirely possible that the baby came out in the standard manner.

What is certain is that Nathan Pepper was born with a mouth full of long, pointed teeth. Apart from that, he was an ordinary baby: exactly twenty inches long, eight pounds and three ounces in weight, with beautiful blue eyes and a few thin strands of black hair.

His mother, Ellen, cooed and cradled the newborn against her chest, while her husband Samuel trembled and wondered if he had fathered an abomination. What kind of child was born with teeth at all, much less these ghastly pointed ones? If Samuel weren’t so certain of his wife’s immediate attachment to their new son, he might have taken the boy out behind the house and quickly done away with him, but Ellen seemed to take no notice of the abnormality, and Samuel pretended to agree that he was the most adorable baby ever conceived.

Not much later, though, she did acknowledge the teeth. “It
is
strange,” she said, peering into Nathan’s mouth as he cried. “Has there been anything like this on your side of the family?”

“Hmmm. It’s nothing that I expected, that’s for sure. I don’t think I’ll be breastfeeding him.”

“So…do you think…” Samuel trailed off, not quite certain how to phrase this. “Should we…you know…keep it?”

Ellen gaped at him. “What are you saying?”

“Of course he’s human! You saw him pop right out of me, and I’m certainly human. Don’t you dare refer to him as ‘it’ ever again. We can’t possibly be the first parents this has ever happened to. Children are born with physical quirks all the time. Do you remember my second cousin, Lizzie?”

“She has six toes on her right foot.”

“Really?” Samuel seemed to recall that one of Lizzie’s shoes was larger than the other, but he hadn’t considered that there might have been a sixth toe under there. “Why didn’t they just cut the extra one off?”

“Because you don’t
do
that sort of thing. And we’re definitely not going to pluck our son’s teeth out.” She glared at Samuel and gently ran her fingers over Nathan’s head. “Don’t worry, sweetheart, we’ll take care of you forever.”

That evening, the doctor arrived. Dr. Thompson, the only physician in the village of Hammer’s Lost, was a portly and jolly man who always said “You can’t rush medical care.” Though many of his patients debated this concept, they did concede that nobody had ever died while waiting for Dr. Thompson to make a house call.

“Oh, he’s a handsome little fellow,” said the doctor, giving Nathan an affectionate tap on the nose. “Sometimes even with attractive parents such as yourselves the baby doesn’t come out looking as good as it might, so well done.”

Dr. Thompson’s first reaction was to flinch in shock, a reaction of which he was not proud. He tried to present a completely professional front whenever he was with a patient, and it was unseemly for a physician to flinch at a deformity.

His second thought was that it was a joke; that Samuel and Ellen had outfitted their newborn with a set of false teeth to startle him and amuse themselves. Dr. Thompson did not approve of this at all. Not because he objected to being the butt of a gag—he could laugh as well as the next man—but because it presented a choking hazard for the infant.

But the new parents did not so much as crack a smile. In fact, Samuel looked more serious and grim than Dr. Thompson had ever seen him. Which led to his third thought: cross-breeding. Somehow the genetic material of a piranha had been combined with a human, resulting in the disconcerting sight before him.

He quickly rejected the third thought and moved on to the fourth, which was that he’d merely imagined it. But, no, the baby’s mouth was still open, and it was still full of sharp teeth. Dr. Thompson had no fifth thought on the matter, and thus resorted to speaking.

“Have you ever seen such a thing?” Samuel asked. “I mean, is that a known medical condition?”

Dr. Thompson shook his head. He touched one of the teeth with his index finger—gently but quickly, as if the baby might try to bite it off. The teeth were larger than those of an adult and V-shaped. They were like something out of a terrifying nightmare from which you would awaken screaming and drenched in cold sweat, though Dr. Thompson felt it best not to phrase his opinion in quite that manner.

“I’m not going to lie to you,” he said. “It is the least typical infant mouth I’ve ever seen.”

“Is it dangerous?” asked Ellen.

“It certainly could be. Have you ever accidentally bitten your tongue? It hurts, doesn’t it? Well, imagine biting your tongue with teeth like those. Unpleasant.”

“As far as danger to others,” Dr. Thompson continued, “do I think he’ll try to take a bite out of your neck? No. That doesn’t mean you shouldn’t exercise caution when you’re burping him, but I see no reason to live in fear of your son.”

“Can they be fixed?” Samuel asked.

“I’m no dentist,” Dr. Thompson admitted, although that hadn’t stopped him from practicing dentistry on six different occasions in the past. “I will say from experience that it’s much easier to sharpen teeth than to un-sharpen them. They could all be capped, I suppose, but it would be an expensive procedure.”

“What about simply removing them?”

“Samuel!” Ellen held the baby closer, as if her husband might try to snatch their child out of her hands. “We’re not going to pull out his teeth! He was born this way for a reason.”

“I don’t love him any less, and you’re not going to, either. We’re going to raise him just as we’d planned. Maybe with a small adjustment or two, obviously, but he’s going to live a normal life.”

Samuel turned to Dr. Thompson. “You’d mentioned his tongue. What if he
does
bite it off? We could have a child with scary teeth and no tongue. He won’t be able to speak; he’ll just make moaning sounds, which will do nothing to dispel the idea that he’s a monster! I’m not suggesting that we pick up a rock and start knocking them out, but there must be some kind of delicate surgery that can be performed.”

Dr. Thompson furrowed his brow. Logically, he agreed with Samuel. The boy couldn’t possibly have a normal childhood with teeth like that. On the other hand, Dr. Thompson had learned that it was always best to side with brand-new mothers in all issues involving anything of any type.

“Oh, little Nathan will be fine,” Dr. Thompson said, packing away his stethoscope. “It’s the way of the world for new parents to worry, but I very much doubt that he’ll be a danger to himself or those around him. If you have any problems, just give me a call.”

He did not leave quickly, but neither did he dawdle.

As Dr. Thompson drove home, he wondered if this might be an opportunity to get himself into one of the reputable medical journals. He could monitor the progress of the Boy With Creature Teeth, write up his observations, and finally earn the jealousy of his peers.

But would that be exploitive?

Dr. Thompson liked to drink, smoke, gamble, and indulge in the pleasures of women without emotional involvement and without sharing news of these encounters with his wife. He also took naps at inappropriate times, engaged in the occasional bit of minor fraud, and once, back in his youth, there’d been a regrettable instance of cold-blooded murder. But to exploit an innocent baby, even for “science,” just felt wrong to him. Not to mention that—at least by the usual standards for the medical profession—he was an extremely lazy man. A full study of a medical marvel seemed like a lot of work.

So instead he drove to his second-favorite bar, had a few beers, played a game of darts, and then went to treat Mrs. Preston’s infected leg.

Meanwhile, Samuel was conflicted. It was, after all, his own flesh and blood. You weren’t supposed to be repulsed by your own son. And the way the child now slept, with his mouth mercifully closed, Samuel almost felt the stirrings of parental adoration that he should have been feeling since the moment of birth.

“You’re right,” he told Ellen. “He is a beautiful child. And for as long as we live, nobody will ever hurt him.”

Samuel decided that he wasn’t going to take any action. Maybe the teeth would fall out on their own overnight.

The teeth did not fall out on their own, but nor had they grown larger during the night. This was a great relief to Samuel, since he had dreamt of peering into the crib to see Nathan’s head elongated to six times its previous size to accommodate his rapidly growing teeth. Compared to that, the reality of the situation wasn’t so bad.

By the end of the day, though he couldn’t honestly say that he was
used
to the teeth, the sight of them no longer horrified him. Nathan seemed to be healthy and happy. While Samuel had no plans to impregnate his wife a second time, for fear of what might come out next (antennae?), he made peace with the appearance of his current child.

“What should we tell everybody?” he asked, as Ellen nursed the baby with a reinforced bottle.

“Should we prepare them? Send out pictures? Give people a chance to react in the privacy of their own homes before they see Nathan in person?”

Ellen frowned. “Maybe we should just send a mouth-closed picture and warn people that he’s ‘different.’”

“’Different’ could mean a redhead. We should be unsubtle.”

“Look, if we…” Samuel started to say “
Look, if we aren’t going to get rid of him and we aren’t going to hide him in the basement for his entire life, then we should just send the pictures out there and get it over with
,” but decided not to. “I think that if people are going to scream, it would help if they did it someplace else.”

“I can think of at least four people who are likely to scream.”

“I just feel that when they see him in person, see his sweetness and innocence, see his adorable dimples, then the other thing won’t carry quite as much of a shock.”