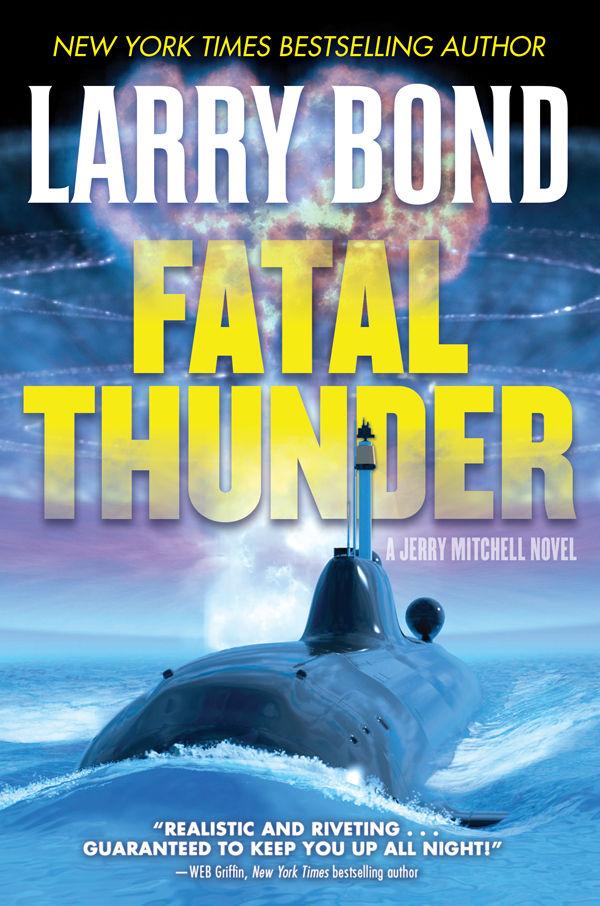 The demands of publishing require that only one name appear on the front cover, but my coauthor, Chris Carlson, had as much to do with the work of creating this book as I did. As a matter of fact, Chris came up with the idea of a fifth book in what was supposed to be a four-book series.

Our ability to stay in synch, to carry virtually the same story in two different minds, is a tremendous advantage, and while I’ve worked with Chris for more than thirty years now on dozens of joint projects, I do not take it for granted.

We plotted this story out together, edited each other’s chapters, and had a lot of fun telling a story about characters that we know very well.

Joanna Patterson saw the major’s excited expression and tried to stay calm. Pausing for just a moment, she announced to the small group in her office, “We’ll have to continue this later. Kathy will give you a time this afternoon.”

There was no discussion. The meeting was over, and the staffers quickly gathered their materials and filed out of her office as Walsh stepped aside. There were a few questioning looks, but nobody spoke.

Her heart turned to ice and she asked, “How big?,” then shook her head. “No, they don’t know that yet. Where, exactly?”

Walsh opened his tablet and passed it to her. It showed the entire Indian subcontinent, with a small red dot over the disputed territory lying between India and Pakistan. She zoomed in until Kashmir filled the screen. “It’s in the part of Kashmir controlled by Pakistan,” she observed. “And square in between the front lines.”

“The detonation was close to Muzaffarabad.” Walsh pronounced the city’s name smoothly. He spoke Pashto as well as Arabic, one of the reasons she’d picked him for her staff. “Lashkar-e-Taiba’s principal base in Kashmir is located fifteen kilometers to the north of that city, tucked into one of those mountain valleys.”

Patterson zoomed the map in again. The red dot looked to be a little north and west of the city. “Right on target. Were the Indians that angry about the stalled peace talks?” She felt a flash of anger, then confusion. No, they couldn’t be that stupid. Could they?

Walsh explained, “The whole area’s mountains and valleys. The terrain should shield the town from the blast and heat flash, but the fallout…”

She started to zoom in again, but stopped short and quickly handed the tablet back to Walsh. They’d worry about civilian casualties later. She was the national security advisor, and had things to do. “Is the quick-look report ready for the president?” She was confirming, not asking.

“Yes, ma’am. Captain Cruz is ready to brief him right now, and Commander Ashe is standing by to brief Chief of Staff Alvarez.”

“Get them going, now. The president’s going to be calling me five minutes after the briefing to ask for my recommendations. Call Cheyenne Mountain back and get an amplifying report on what the satellites saw. Then get ahold of NGA and see if they have any imagery of the blast area. I’ll also need an estimate of the yield. Be back here in four minutes.”

“Yes’m.” Walsh almost ran from the room, and as he left, she called, “Kathy!”

“Kathy, a nuclear weapon’s exploded in Kashmir, and it’s going to look like one’s gone off around here when the media finds out. That’ll be in about fifteen minutes if CNN is on the ball, and I’ve got to give President Myles my recommendations before that.”

“Get all our senior staff in the conference room for a brief and retasking.”

“When should they be there?” Fell asked.

“As soon as they’re told,” Patterson answered. “I’ll be there in ten minutes. Schedule an NSC meeting for eleven o’clock. Principals or deputies, but I want someone there, with whatever information they have about the Kashmir bomb, then another meeting for six tonight of the full National Security Council—no deputies at that one.”

“We’ll set up a video link if he can’t get back before then,” Patterson quickly answered. “The SECDEF is a must. And reschedule anything on my calendar for today and tomorrow that isn’t an ultraviolet priority.”

The phone rang, and Fell started to reach for it, but Patterson waved her off. “I’ve got this one.”

Patterson picked up the phone and listened for a moment. “Yes, Mr. President. No, sir, we don’t have any details at the moment. We’ve started working the problem and I’ll have an update for you in fifteen minutes. Excuse me for one moment, sir.”

Kathy Fell was almost out the door, and Patterson called after her, “Make sure someone is working on the OPREP-3 message, and get someone to start working on the weather patterns right away—all the way out to the western Pacific.”

She raised the phone again. “No, sir, I don’t know what the Indian government thinks they can accomplish…”

The sudden knock on the stateroom door jolted Jerry Mitchell from his dazed state. Shaking his head and clearing the mental mist, he managed, “Come in.”

The door swung open and a mess specialist walked in, a stainless-steel carafe in his hands. “Here’s the coffee you asked for, Skipper. Can I get you anything else?”

Jerry swiftly extended his well-tarnished mug toward the sailor; like a destitute street beggar, he desperately needed the empty volume filled. “Thank you, Petty Officer Johnson, but this is all I really need right now.”

Johnson filled the mug and set the carafe on the fold-out work desk. Jerry thanked him again as he left, then took a sip and looked up at the clock. He still had another hour of work reviewing the engineering logs before he could call it a day—a long day. No sense procrastinating. His XO would deposit the next batch of paperwork into his in-box by tomorrow afternoon. Jerry was silently grateful that this patrol was far less eventful than the last one.

It had been almost six months since the war between China and the Littoral Alliance had come to an abrupt end. A lot had happened in those six months: President Myles had been reelected, his close friend Joanna Patterson had become the national security advisor, his boat had been formally transferred to Squadron Fifteen, and to top things off, Emily was expecting their first child. Jerry winced as he recalled the unpleasant move from Hawaii to Guam during her first trimester. Cleaning, packing, and teaching didn’t mix well with morning sickness—an empirical observation that Emily had reminded him of, and often.

Jerry’s family was beyond enthusiastic when they received the news of Emily’s pregnancy. His sister Clarice reported that their mother had actually shouted, “Alleluia! About time!” Their dad began chuckling ominously and muttering, “My little revenge.” This sinister comment had prompted Jerry to recall the knuckleheaded antics he’d pulled as a child.

Still, with the move behind them, Emily feeling better and teaching again, and the soon-to-be grandparents waiting with bated breath, happiness and serenity had returned to the Mitchell household.

Jerry sighed, refilled his coffee cup, and got back to work. He’d only made it through the first set of engine room logs when the Dialex phone rang. Grabbing the handset, he answered, “Captain.”

“Skipper, this is the XO, sir. Please come to radio immediately. We just received an OPREP-3 Pinnacle Nucflash message.”

Jerry shook his head in confusion; he must be more tired than he thought. “Ah, Bernie, would you repeat that, please? Did you say ‘Nucflash’?”

“Yes, sir. We just received a no-shit OPREP-3 Pinnacle Nucflash message. It looks like the Indians popped a nuke in Pakistan.”

“I’ll be right there,” Jerry said, barely pausing to hang up the phone. Racing to radio, he wondered why the Indians would do something so stupid. The current Indo-Pakistani War was the last remnant of the larger Sino–Littoral Alliance conflict, but up to this point, the cease-fire was holding. Even with the talks stalled, and despite some verbal saber rattling from senior military officers on both sides, nothing suggested that either nation was ready to start shooting again. And a single nuclear weapon? This just didn’t make any sense. It
had
to be some sort of mistake.

As Jerry reached the radio room, Lieutenant Commander Bernie Thigpen handed him a hard copy of the message. “The nuke went off over the Pakistani-controlled portion of Kashmir,” he reported. “It was a big one, too. Initial estimates put the yield at one hundred–plus kilotons.”

Jerry remained silent as he read the message. The contents failed to answer any of the truly important questions. It was just a basic report announcing the time and place of the event. There was nothing to explain the “why” behind it. He went over the text again, just to be sure, then handed the paper back to his XO, a look of sheer amazement on his face.

“I’m just as flummoxed as you are, Skipper,” Thigpen empathized. “Why in the world India would do something so irrational is beyond me. Trying to kickstart peace negotiations with a nuke isn’t exactly a winning tactic. Kind of defeats the purpose, don’t you think?”

Jerry was still analyzing the news when a dreadful thought jumped into his mind. Alarmed, he turned toward Thigpen and said, “The wind! Which way…”

“It’s coming from the west-northwest, sir,” Thigpen interrupted. “It’s a problem for India, Nepal, and parts of China; Emily and the rest of the crew’s family members won’t be affected by the fallout. At least not this time.”

Darkmans by Nicola Barker
Class A by Lucas Mann
Savior In The Dark by Torres, Ana
Stretching Anatomy-2nd Edition by Arnold Nelson, Jouko Kokkonen
Voices of Dragons by Carrie Vaughn
Walking the Dog by Elizabeth Swados
Sin No More by Stefan Lear
Dangerous Secrets: An Alpha Billionaire Romance (Dangerous Desires Book 3) by Matthison, Kira
Taking the Fifth by J. A. Jance
The Scandalous Billionaires Collection by Drew Sinclair
Our partner