Fear and Anger (The 47 Echo Series) 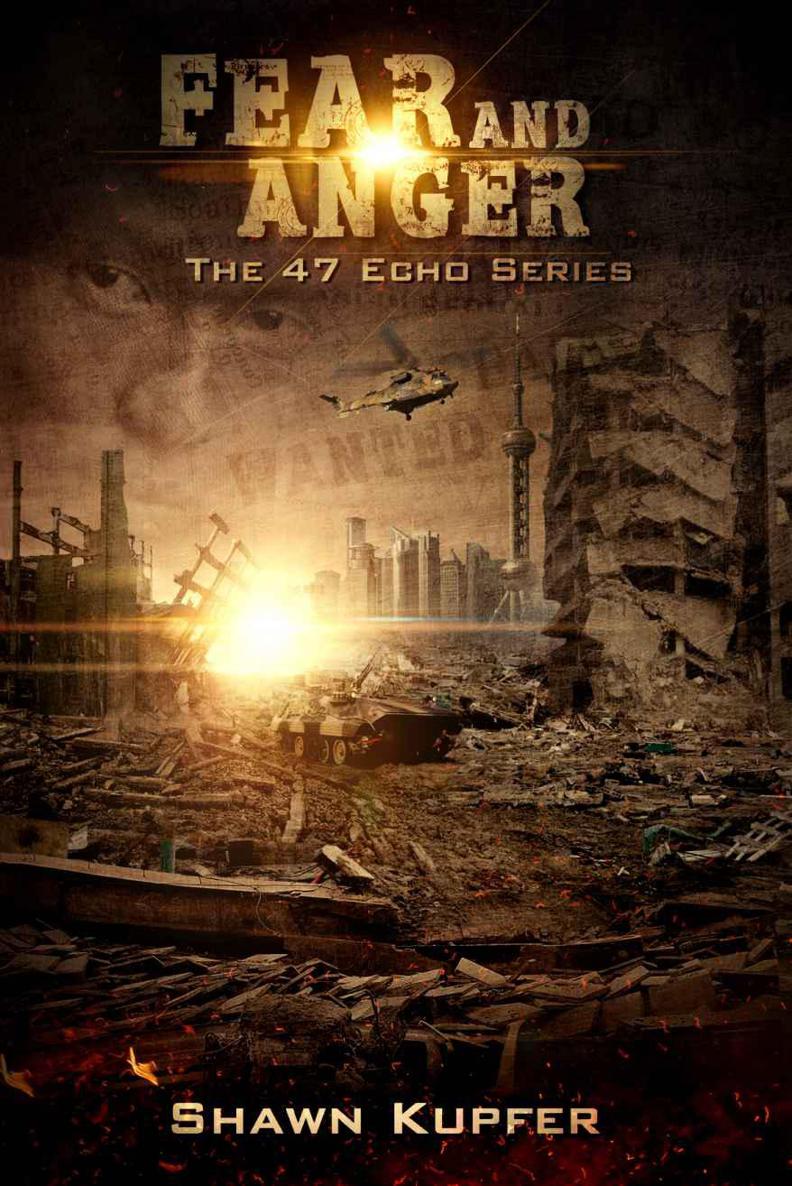 This book – hell, this
publishing company
– wouldn’t have come together without the efforts of a lot of very special people. First of all, my wife Lisa, my partner in life and in Eddington Press. Big thanks also go out to Nate Hoppe, holder of the sacred Editing Hammer; Christopher Gronlund, my podcasting partner and fellow word-nerd; and Joe Peacock, who, whether he realizes it or not, inspired me to take my destiny into my own hands. Last, but never least, thanks go out to
you
, the person who is now holding this book in its Internet-Ghost form on your ereader. If you weren’t reading it, I wouldn’t have been able to write it.

“Hold on tight, because I’m going to have to crash this goddamn thing,” were the last words Christopher Lee wanted to hear.

So, of course, those were the words that woke him from a light sleep in his chair just behind the pilot’s seat of the stolen Chinese Z-9 Haitun helicopter.

“Please tell me I dreamed you saying you were going to have to crash,” Christopher groaned, unstrapping his safety harness and stepping forward to stand between the two front seats of the chopper.

“Sorry, Sergeant. You heard correct,” the muscular female Marine, Master Sergeant Ortiz-Gonzales, said from the pilot’s seat. “We’re out of fuel in about thirty seconds. You really shouldn’t be out of your seat.”

“How far are we from the carriers?” Christopher asked, sitting back down and strapping himself back in. He looked around the cabin to see the rest of his team doing the same.

“Lovely,” Daniel Voyer, the team’s sniper, grumbled from his seat next to Christopher. “Did we at least –”

Daniel never got to finish his question. In what seemed like an instant, the helicopter’s rotors stopped dead, and the vehicle started falling out of the sky. Ortiz-Gonzales had managed to get them down a couple of thousand feet, close to the surface of the East China Sea, but the impact still hurt like hell when it came. Christopher had never been in a helicopter crash before, on land or into the water, but it felt to him like the chopper had simply smacked into the ground rather than the much softer H
2
O.

Initially, Christopher wondered if they hadn’t crashed into an island rather than the sea. The impact just seemed too solid to him, too much like they had hit land and hit it hard. One thing was for sure, though – they certainly weren’t flying anymore.

He knew they were in the water soon enough. The chopper’s large passenger area quickly filled with the stuff, and it was much warmer than Christopher had expected – it had been chilly out when they left Shanghai a little more than an hour before. In the time it took him to have that thought, the water was already up to his knees. Christopher felt the chopper start tilting to one side as he reached for the four-point harness that held him in his seat. The tilt went the wrong way, tipping the side with the large passenger door into the ocean. Suddenly the water started coming into the chopper twice as fast.

In less than a minute, the entire chopper was underwater. Christopher struggled with his harness and finally got himself free. He floated up out of his seat and banged his head on something, but the impact wasn’t terrible. In the murky water, he caught the outline of the chopper’s open side door, and swam through it, kicked down and away, then up around the rapidly sinking machine. He kicked as hard as he could, pushing himself toward the light of the surface.

When his head broke the water, he saw most of his team had already beat him to daylight. He made a quick headcount – Mary Wells, their computer expert. Check. Daniel, Ortiz-Gonzales, and Matsuda. Check. Martin Chase, their demolitions guy. Gabriel, the medic. Check. Only Bryce, the team’s driver, was missing, and he popped up a few seconds after Christopher. Bryce was bleeding from a cut on his forehead, but Christopher suspected that the injury looked worse than it was. Head wounds bled like a bitch, and the water only made it look like there was even more blood. Bryce’s eyes were clear and alert, and he seemed calm as he treaded water next to Martin. Gabriel saw the wound, too, and swam over to his colleague.

“Everyone OK?” Christopher yelled, spitting water out of his mouth.

“That sucked,” Martin complained, “But I think I’m OK.”

“Like I started to say back in the chopper,” Daniel said, calm and level as if they hadn’t just crashed and almost drowned, “did we manage to get in touch with the carrier before we went down?”

“Yeah. They know about where we are. All we gotta do is tread water and wait for them to pick our asses up,” Ortiz-Gonzales replied, pushing a clump of wet hair out of her eyes.

“Just a leisurely swim until our ride gets here,” Bryce said. “At least the water’s waking me up some. That, and the salt is nicely stinging this little cut.”

“Uh, guys? Anyone know if there are sharks in this pond?” Martin asked, his voice shaking slightly.

“Staff Sergeant. How are you feeling?” Captain Rush, commanding officer of the carrier Enterprise, asked Christopher. “I only ask because you
look
like hammered shit.”

“I’m good to go, sir,” Christopher lied, hopping off his bed in the ship’s sickbay. He landed solidly on both feet, which surprised him – he felt like he wanted to crash to the deck. His entire body was tired from treading water for the better part of two hours. “Ready to go back out there and get my Lieutenant, sir.”

“Not happening, Sergeant,” Rush said, shaking his head. “Chinese defense grid – that one you and your team were so polite to take down for us – went back up an hour ago. Nothing’s getting into mainland China without getting shot to shit first.”

“Captain... our boss stayed behind so we’d have enough power to make it here,” Christopher started.

“Yeah. How’d that work out for you?” Rush said.

Christopher fought the urge to drive a fist right into the superior officer’s face. The man was bigger and stronger than he was, and outranked Christopher by a mile, so it shouldn’t have been a struggle to keep his right hand from balling into a fist, but it was harder than Christopher expected. He put his hands behind his back just to be safe.

“I told him we’d be coming back for him,” he finished, grinding his teeth together to keep from adding the word “motherfucker” to the end of the sentence.

“Gonna have to make a liar out of you, Sergeant. Look, I understand the situation. Master Sergeant Ortiz-Gonzales was... rather vocal about going back, as well. To the point of insubordination,” Rush said, his sharp features tightening into a scowl. “And believe me, I’d send you right back out if it would make a damn bit of difference. But even in our best stealth chopper, you wouldn’t make it within 50 miles of the Chinese coastline. Their Air Force is on hyper-alert.”

“Sir, with all due respect – give me a fucking rubber raft and a gun, and I’ll go alone,” Christopher said.

Rush’s scowl fell from his face, and he nodded slightly.

“Goddamn, Sergeant. I do respect your loyalty to your CO. Not to mention that you’ve got balls the size of meteors. And I feel for you – I lost a couple of my pilots inside Shanghai when the grid went back up,” he said. “But I’ve got orders to put you and your team on the first thing smoking back to Firebase Zulu. Orders from well above both of our pay grades, you get me?”

Christopher said nothing. He wanted to reply to the Captain, but his brain and his mouth suddenly decided not to work together to form human speech. Instead, he just nodded, his jaw tightly set.

“Good man. I’ve cleared a convict area for your crew. You can sack out for a few hours in the NCO quarters, if you like.”

“I’ll stay with my people.”

“Your choice. You’ve got about two hours before we get close enough to Nagasaki to chopper you ashore. Air Force boys will handle you from there. I’m trying to scrounge up some convict BDUs for your people now.”

“Blacks work fine if you have them, sir. We’re Special Forces, so we usually don’t wear convict grays.”

Christopher again had to fight the urge to punch the senior officer. He clenched his fists tightly behind his back and said nothing. His molars felt like they were going to grind down to powder, but he kept his jaw tightly shut.

“Get some rest, Sergeant. You look like you haven’t slept in a couple of days. Corpsman here will show you to your team.”

The walk to the convict quarters wasn’t long, and Christopher was still unsure of how he was going to tell his team that their boss and friend, Nick Morrow, who had saved all of their lives a dozen times by now, was on his own in enemy territory.

“Well, that’s it. I’m dead,” Nick Morrow said to no one in particular, folding the ancient cell phone closed and sticking it into the cargo pocket of his stolen People’s Liberation Army uniform.

Of course, this realization wasn’t a surprise to him. When the helicopter holding his team took off an hour and a half before, he’d pretty much known they weren’t coming back for him. Still, though, he’d hoped there was a chance, so he’d stayed in the same abandoned factory where they’d left him until the call came in.

It had at least been from a reassuring source, from a friend – Lt. Colonel Johnny Evans, an Army Ranger commander, had been the one to tell him he was on his own. Nick had been positive on the phone, the very picture of Marine bravado and bravery. He’d said some stupid bullshit about how he’d be fine on his own, how he’d see the Colonel soon.

Yeah. Just as soon as you fight your way out of a country with a billion and a half pissed-off people, most of whom are armed
, he thought as he laid out his equipment on the workbench in front of him.

Nick wasn’t hurting for weapons at all. When his team piled into the helicopter, they dropped everything they didn’t absolutely need. That left him with a half-dozen AK-47s, a few Chinese Type 95 assault rifles, and three Type 77 pistols. Ammo was slightly more of a problem, though. They’d burned through a lot of that just that morning, and Nick had to scrounge to put together a full magazine for one of the Type 95s. He was fine on pistol ammo, though – three clips. It wasn’t as if he was going to be able to shoot his way out, but being armed... that was reassuring.