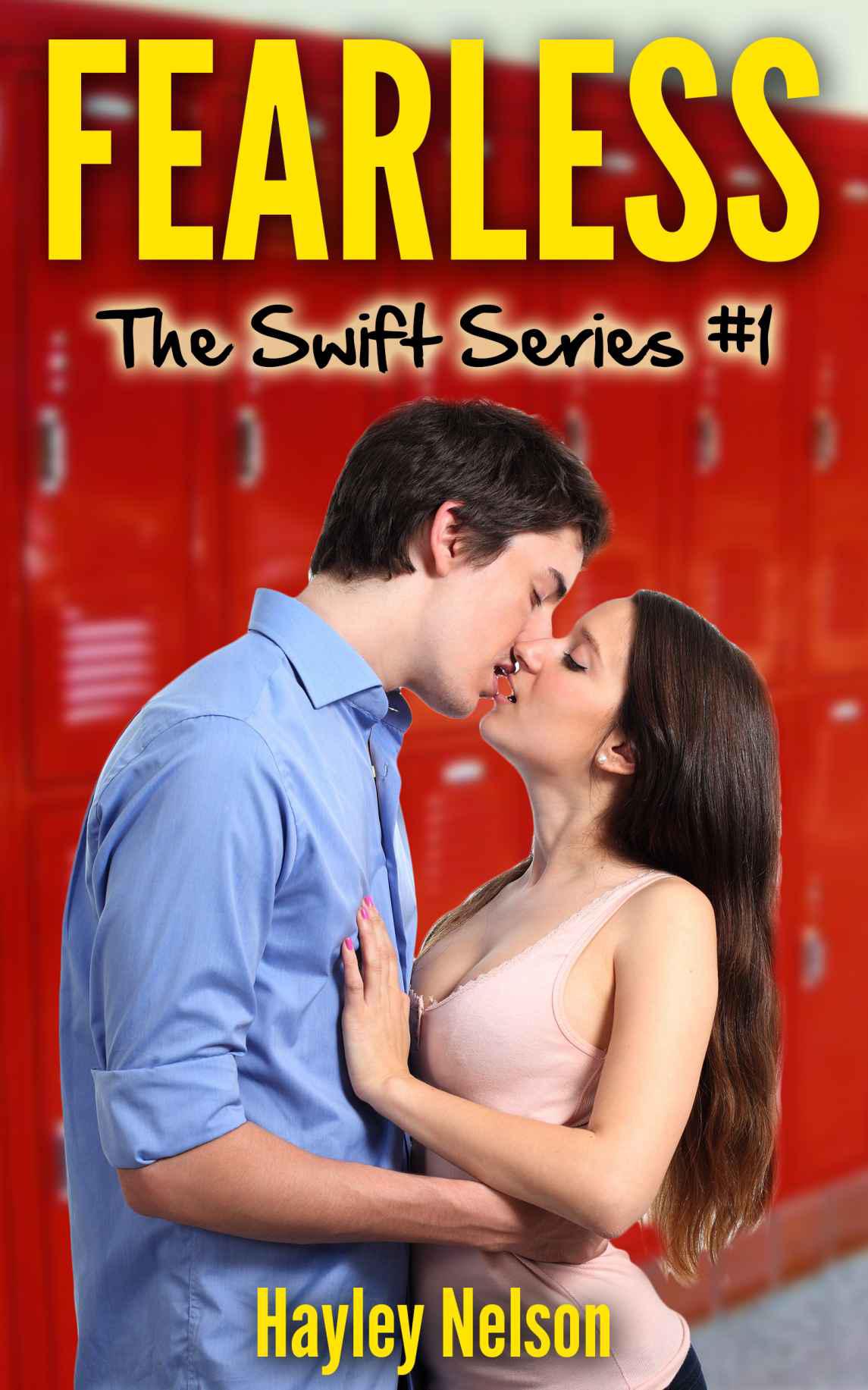 Fearless
The Swift
Series #1
All Rights Reserved
No part of this e-book may be reproduced or transmitted in
any form whatsoever without the express written dated and signed Permission of
the author.
Other than a printed version for personal use of the
purchaser.
This e-book published by
Hayley
Nelson

To Meet You Again

“Take a deep breath and walk through the doors; it’s the morning of
your very first day…”

The halls of Vroncourt High School were bustling.

Then there was me – a mix between the first and the
last thing.

This was my first day at Vroncourt, but also my last
year in high school.

I moved from Marrick Academy which was all the way
in Orainville. Montrose Court, where Vroncourt is, is about 300 km away –
practically 8 hours by car. Both were small towns, though. I had to say goodbye
to all the people I knew.

So why did we have to move so far? My father’s
company offered him a much higher level position and the office was in Montrose
Court. Well, as long as he’s out of the house often enough for me to throw enough
parties to become popular…

Who actually enjoys those things?

I mean, your house gets super dirty. Everything gets
broken. Everyone has sex everywhere; the only safest precautionary measure
would be to disinfect the ENTIRE household.

Anyway, from the first minute I stepped into
Vroncourt I noticed several major differences between the students here and the
ones back in Marrick.

First, Vroncourt requires uniforms while Marrick
does not. I assumed that Vroncourt also comes with some strict policies about
overall appearance since nobody had any noticeable tattoos, piercings,
attention-drawing haircuts and etc. Back over at Marrick my eyes were exposed
to a myriad of different styles and fashion senses.

Second, Vroncourt was much cleaner. The walls were
so pristinely white. The lockers all looked exactly the same. I walked into the
bathroom to check my hair, and it was so super clean. Toilet paper in every
cubical, water coming out of every faucet and soap dispensers everywhere (yeah,
I checked). In Marrick, you best go to the bathroom before you get picked up by
the school bus and once you get home, instead. And there was always graffiti on
at least on locker in each row.

Third, the books were fancy. You had to buy copies.
Clean, unused copies. Back in Marrick, books circulated. Often times you didn’t
need to highlight a single thing. Sometimes, if you were lucky enough, you’d
get a book that had all the answers written down.

Everything about Vroncourt screamed “money, money,
money, money… MOOONEY~” (that was supposed to be the theme song to “The
Apprentice”). This was clearly a school for rich people, and I was sure I stuck
out like a sore thumb.

My dad wasn’t rich. He worked hard doing the work of
people higher up in the company without the credit or the pay. My dad was a
pushover. He always talked about how much he was learning and experiencing, but
every time I thought about it, it just made me mad.

Anyway, it didn’t matter that I wore the uniform (white
three-quarter sleeve polo, red tie, black pleated above-knee-length skirt,
knee-length white socks, black shoes and blue blazer). As I walked down the
hall, people were looking at me. I guess it was my fault; all of them were
wearing their blazers. I found it a little too hot wearing it on the walk to
school so I’d just hung it on my shoulder while my backpack hung on the other
by one strap.

But it was more than that, too. I didn’t wear fancy
earrings. I didn’t carry around a nice designer bag. My hair wasn’t perfectly
styled the way all the other girls. In fact, I remembered putting my hair up in
a messy bun.

I finally found my locker after a couple of minutes
and proceeded to take the books I needed. A girl with perfectly straight and
smooth, red locks approached me. She had light skin and big, brown eyes. Aside
from that, her other features were small. She had a pleasant face.

“Why don’t I know you?” the redhead asked. Oh, by
the way, this school had about 300 students only, so everybody sort of knew
everybody else.

Why so exclusive? One: it’s for rich people. Two: if
you can’t afford the tuition you can opt to take an extremely competitive
scholarship exam. I passed the exam.

At the time it seemed like a good thing.

Now I wish I’d gone to Moores Mill High instead. Based
on what I knew from Google, it resembled Marrick more closely.

“I’m new here,” I answered as I closed my locker.

“You’re that scholarship student?” she guessed.

“Am I the only new scholarship student this year?” I
asked.

“Not a lot of people transfer over in their fourth
year,” she replied and then held out her hand. “I’m Abigail Carver.”

“Taylor Doctor,” I shook her hand.

“Your last name is ‘doctor’?” she checked, amused.

Both of us looked up when the bell rang.

“Well, it was nice meeting you,” Abigail smiled and
began to walk away. “Are you okay getting to your classes on your own?”

“Yeah, I’m good. Thank you,” I waved. Then she
disappeared into a sea of blue blazers, and I was alone once again.

I probably should have taken the opportunity and
asked Abigail to show me where my first class was, not necessarily because I
didn’t think I’d be able to find it on my own but because I was in desperate
need of a friend right now.

Back in Marrick the only friend I really had was
Sarah Collins. She was prone to drastic mood swings – probably because of her
genius ability for the violin – but otherwise she was sweet. When she finally found
out that I was moving to Vroncourt (a school she religiously made fun of every
time the subject came up, which was exactly what delayed my telling her for so
long) she immediately felt indignant towards me. She thought I didn’t fight
hard enough against the decision and that I was leaving her. We haven’t spoken
since I broke the news to her.

Since we moved to Montrose Court, I’ve been only to
the two other households in the cul-de-sac that the people pretentiously call
the “Rose Circle”. If they were trying to be geometrically correct they should
have said the “Rose Semi-Circle”, but I assume they thought it didn’t sound as
good.

The house on our right belongs to the Randolfs. They
didn’t have any children. The house on the right of the Randolfs’ house was
that of the Andolinis. Their three children have all graduated from college and
live in their own homes. Our house was the smallest in the “Rose Circle”.

My dad invited both couples over for dinner the week
after we’d just moved in. My sister, Sue, and I (Oh, did I forget to mention
Sue, my sister who’s younger than me by a year? She had to move, too, but she
didn’t pass the Vroncourt scholarship exam so she’s going to Moores Mill. Lucky
bitch) had to sit through adult conversation for an hour until the
embarrassing, uncomfortable questions and answers started coming up.

The couples have been extremely kind to Sue and me;
offering to bring us and pick us up from school, offering to take us shopping,
etc. I’ve been very particular about not taking advantage of the fact that both
couples loved children (the Randolfs unfortunately couldn’t have any and the
Andolinis were a little too old to have more), but I couldn’t say anything
about Sue. The move was a lot harder on her since she actually had a large
social circle back in Orainville. She planned to milk the benefits as much as
she could.

The whole rest of the day I didn’t see Abigail,
which would have been fine except that nobody made an effort to talk to me. If
anything, they tried to avoid me as much as possible.

Then, at the end of the day, just as I exited the
main doors I was attacked by foam and black tapioca pearls to the face. I
couldn’t see my assailants because some of the liquid got into my eyes, but I
knew they were girls because I could hear them giggling as they walked away.

I gave them a little credit; at least they chose to
do it after school instead of during. It saved me a lot of trouble, except that
I had to walk home a little chilled. They wasted money to humiliate me. I guess
I was special. Glass half full.

“What happened to you?” Sue asked when she saw me.
She was sitting on the front porch steps of our home.

I just shrugged. “What about you? You look upset.” I
sat down beside her and wiped my face with my blazer.

“You know how I finally get to go to prom this
year,” she began. “Well, I wanted to join the prom committee but they said I
couldn’t because I was the new kid.”

“Oh,” I said simply. Not sympathetically, nor
empathetically. Just matter-of-fact. “Why do you want to be on the prom
committee?”

“I thought it would be a good way to make friends,”
she shrugged.

“Nobody talked to you either, huh?” I put my arm
around her.

“Yeah,” I agreed. “But you’ll be okay.” I patted her
on the back and then stood up. “So excuse me while I take a shower.”

“So they’re as mean to the scholarship students as
Mrs Randolf said, huh?”

When our father came home and brought us dinner that
night we both lied and told him that we were really happy.

The next day Abigail approached me again.

“I didn’t see you the whole of yesterday,” I
commented.

“I guess we don’t have any classes together.”

“It could happen,” she shrugged. “Why, were you
looking forward to seeing me?”

“You’re the only one who’s willing to talk to me
around here,” I admitted. “Everyone else avoids me or throws milk tea and
coffee in my face.”

“I hope it wasn’t hot coffee.”

“No, it wasn’t, thanks,” I pressed my lips together.

“Don’t let them get to you,” she advised. “There’s
always friction when it comes to the scholarship students and the regular
students.”

“Maybe you should’ve told me that yesterday,” I
tried to sound like I was joking, but I couldn’t hide what I was really
feeling; it was a mix of anger, resentment, irritation, disappointment and
sadness. Each feeling sort of mellowed out the others. Mostly it was a bad
feeling. I was feeling bad.

“I didn’t think they’d be as immature as they were
last time,” she reasoned.

“When was last time?”

“What happened two years ago?”

Abigail hesitated. She took a deep breath and then
sighed. “His name was Kyle. A girl seduced him and got a picture of him naked
and then posted it online.”

“Oh my god!” I exclaimed. “Seriously?

“Bad? Try INSANE,” I was growing a little
hysterical. “Why on earth would you do that someone? Was Kyle an asshole?”

“Then explain to me why,” I demanded. “It’s
ridiculous!”

“Looks like someone needs to cool down,” a voice
said.

I turned around only to be blinded, this time, by
milkshakes. I could tell because these were much, much colder and thicker. And
because this time my eyes burned.

“I can’t see,” I said, sputtering some milkshake out
of my mouth. Mango… and chocolate… and vanilla, I think. I fumbled around with
my hands for a while until they felt the cool metal of the lockers.

My assailants giggled and then walked away. Abigail
said nothing. The bell rang.

“Taylor, I’m sorry,” she apologized. “I don’t have
any extra clothes or anything.”