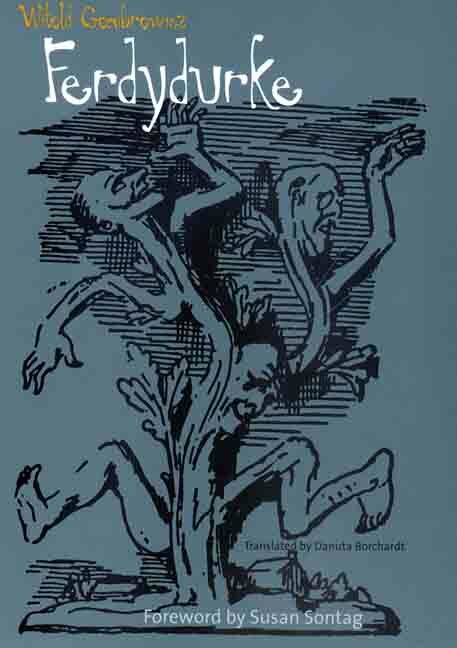 Translated from the Polish by Danuta Borchardt

3 Caught with His Pants Down and Further Kneading

4 Preface to "The Child Runs Deep in Filidor"

5 The Child Runs Deep in Filidor

6 Seduction and Further Driving Me into Youth

9 Peeping and Further Incursion into Modernity

10 Legs on the Loose and New Entrapment

11 Preface to "The Child Runs Deep in Filibert"

12 The Child Runs Deep in Filibert

13 The Farmhand, or Captive Again

14 Mug on the Loose and New Entrapment

Start with the title. Which means . . . nothing. There is no character in the novel called Ferdydurke. And this is only a foretaste of insolence to come. Published in late 1937, when its author was thirty-three,
Ferdydurke
is the great Polish writer's second book. The title of his first,
Memoirs of a Time of Immaturity
(1933), would have served beautifully for the novel. Perhaps this is why Gombrowicz opted for jabberwocky.

That first book, whose title was pounced on by the Warsaw reviewers as if Gombrowicz had made a shaming confession inadvertently, was a collection of stories (he'd been publishing them in magazines since 1926); over the next two years more stories appeared, including a pair ("The Child Runs Deep in Filidor" and "The Child Runs Deep in Filibert") that he would use, with chapter-long mock prefaces, as interludes in
Ferdydurke,
as well as a first play,
Princess Ivona;
then, in early 1935, he embarked on a novel. Had the title of his volume of fanciful stories seemed—his word—"ill-chosen"? Now he would
really
provoke. He would write an epic in defense of immaturity. As he declared toward the end of his life:

Immaturity (not youth) is the word Gombrowicz insists on, insists on because it represents something unattractive, something, to use another of his key words,
inferior.
The longing his novel describes, and endorses, is not, Faust-like, to relive the glory days of youth. What happens to the thirty-year-old who, waking up one morning roiled in the conviction of the futility of his life and all his projects, is abducted by a teacher and returned to the world of callow schoolboys, is a humiliation, a fall.

From the start, Gombrowicz was to write, he had chosen to adopt a "fantastic, eccentric, and bizarre tone" bordering on "mania, folly, absurdity." To irritate, Gombrowicz might have said, is to conquer. I think, therefore I contradict. A young aspirant to glory in 1930s literary Warsaw, Gombrowicz had already become legendary in the writers' cafés for his madcap grimaces and poses. On the page, he sought an equally vehement relation to the reader. Grandiose and goofy, this is a work of unrelenting
address.

Still, it seems likely that Gombrowicz did not know where he was going when he began the novel. "I can well remember," Gombrowicz declared in 1968, a year before he died
(did
he remember? or was he massaging his legend?),
that, when I started
Ferdydurke,
I wanted to write no more than a biting satire that would put me in a superior position over my enemies. But my words were soon whirled away in a violent dance, they took the bit between their teeth and galloped towards a grotesque lunacy with such speed that I had to rewrite the first part of the book in order to give it the same grotesque intensity.

But the problem was less (I suspect) that the first chapters needed a further infusion of lunatic energies than that Gombrowicz did not anticipate the freight of argument—about the nature of eros, about culture (particularly Polish culture), about ideals—his tale would carry.

Ferdydurke
starts with a dreamlike abduction to an absurd world, in which the big become small and the small monstrously big: those great buttocks in the sky. In contrast to the landscape Lewis Carroll conjured up for a prepubescent girl, Gombrowicz's wonderland of shape-shiftings and re-sizings seethes with lust.

Everything was expanding in blackness. Inflating and widening, yet at the same time shrinking and straining, evading something, and some kind of winnowing, general and particular, a coagulating tension and a tensing coagulation, a dangling by a fine thread, as well as transformation into something, transmutation, and furthermore—a falling into some cumulative, towering system, and as if on a narrow little plank raised six stories up, together with the excitement of all organs. And tickling.

In Alice's story, a child falls into an asexual underworld governed by a new, fantastic but implacable logic. In
Ferdydurke,
the grownup who is turned into a schoolboy discovers new, puerile freedoms for giving offense and owning up to disreputable desire.

If someone were to spot me in the hallway, in the darkness, how would I explain this escapade? How do we find ourselves on these tortuous and abnormal roads? Normality is a tightrope-walker above the abyss of abnormality. How much potential madness is contained in the everyday order of things—you never know when and how the course of events will lead you to kidnap a farmhand and take to the fields. It's Zosia that I should be kidnapping. If anyone, it should be Zosia, kidnapping Zosia from a country manor would be the normal and correct thing to do, if anyone it was Zosia, and not this stupid, idiotic farmhand . . .

Ferdydurke
is one of the most bracing, direct books ever written about sexual desire—this without a single scene of sexual union. To be sure, the cards are stacked from the start in favor of eros. Who would not concur in the silencing of
this
social babble by the clamor of rumps, thighs, calves? The head commands, or wishes to. The buttocks reign.

Later, Gombrowicz referred to his novel as a pamphlet. He also called it a parody of a philosophical tale in the manner of Voltaire. Gombrowicz is one of the super-arguers of the twentieth century—
"To contradict,
even on little matters," he declared, "is the supreme necessity of art today"—and
Ferdydurke
is a dazzling novel of ideas. These ideas give the novel both weight and wings.

Gombrowicz capers and thunders, hectors and mocks, but he is also entirely serious about his project of transvaluation, his critique of high "ideals."
Ferdydurke
is one of the few novels I know that could be called Nietzschean; certainly it is the only comic novel that could be so described. (The affecting fantasia of Hesse's
Steppenwolf
seems, in comparison, riddled with sentimentality.) Nietzsche deplored the ascendancy of slave values sponsored by Christianity, and called for the overthrowing of corrupt ideals and for new forms of masterfulness. Gombrowicz, affirming the "human" need for imperfection, incompleteness, inferiority . . . youth, proclaims himself a specialist in inferiority. Swinish adolescence may seem a drastic antidote to smug maturity, but this is exactly what Gombrowicz has in mind. "Degradation became my ideal forever. I worshipped the slave." It is still a Nietzschean project of unmasking, of
exposing,
with a merry satyr-dance of dualisms: mature versus immature, wholes versus parts, clothed versus naked, heterosexuality versus homosexuality, complete versus incomplete.

Gombrowicz gaily deploys many of the devices of high literary modernism lately re-labeled "post-modern," which tweak the traditional decorums of novel writing: notably, that of a garrulous, intrusive narrator awash in his own contradictory emotional states. Burlesque slides into pathos. When not preening, he is abject; when not clowning, he is vulnerable and self-pitying.

An immature narrator is some sort of candid narrator; even one who flaunts what is usually hidden. What he is not is a "sincere" narrator, sincerity being one of those ideals that make no sense in the world of candor and provocation. "In literature sincerity leads nowhere . . . the more artificial we are, the closer we come to frankness. Artificiality allows the artist to approach shameful truths." As for his celebrated
Diary,
Gombrowicz says:

Have you ever read a "sincere" diary? The "sincere" diary is the most mendacious diary . . . And, in the long run, what a bore sincerity is! It is ineffectual.

Then what? My diary had to he sincere, but it could not be sincere. How could I solve the problem? The word, the loose, spoken word, has this consoling particularity: it is close to sincerity, not in what it confesses but in what it claims to be and in what it pursues.

So I had to avoid turning my diary into a confession. I had to show myself "in action," in my intention of imposing myself on the reader in a certain way, in my desire to create myself with everyone looking on. "This is how I would like to be for you," and not "This is how I am."

Still, however fanciful the plot of
Ferdydurke,
no reader will regard the protagonist and his longings as anything other than a transposition of the author's own personality and pathology. By making Joey Kowalski (as the Polish name of the protagonist-narrator is here rendered in English) a writer—and the author of an unsuccessful, much derided book of stories entitled, yes,
Memoirs of a Time of Immaturity—
Gombrowicz dares the reader
not
to think about the man who wrote the novel.

And then the fantasy came true. (Few writers' lives have so clearly taken the shape of a destiny.) At the age of thirty-five, a few days short of the fateful date of September 1, 1939, Gombrowicz was dropped into unexpected exile, far from Europe, in the "immature" New World. It was as brutal a change in his real life as the imagined turning of a thirty-year-old man into a schoolboy. Stranded, without any means of support, where nothing was expected of him, because nothing was known about him, he was offered the divine opportunity to lose himself. In Poland, he was well-born Witold Gombrowicz, a prominent "vanguard" writer, who had written a book many (including his friend, the other great Polish writer of the same period, Bruno Schulz) considered a masterpiece. In Argentina, he writes, "I was nothing, so I could do anything."

It is impossible now to imagine Gombrowicz without his twenty-four years in Argentina (much of which was spent in penury), an Argentina he made to suit his own fantasies, his daring, his pride. He left Poland a relatively young man; he returned to Europe (but never to Poland) when he was nearing sixty, and died six years later in the south of France. Separation from Europe was not the making of Gombrowicz as a writer: the man who published
Ferdydurke
two years earlier was already fully formed as a literary artist. It was, rather, the most providential confirmation of everything his novel knows, and gave direction and bite to the marvelous writings still to come.

The ordeal of emigration—and for Gombrowicz it was an ordeal—sharpened his cultural combativeness, as we know from the
Diary.
The
Diary—
in three volumes in English, and anything but a "personal" diary—can be read as a kind of free-form fiction, postmodern
avant la lettre,
that is, animated by a program of violating decorum similar to that of
Ferdydurke.
Claims for the staggering genius and intellectual acuity of the author vie with a running account of his insecurities, imperfections, and embarrassments, and a defiant avowal of barbaric, yokel prejudices. Considering himself slighted by, and therefore eager to reject, the lively literary milieu of late 1930s Buenos Aires, and aware that it harbored one indisputably great writer, Gombrowicz declared himself "at opposite poles" from Borges. "He is deeply rooted in literature, I in life. To tell the truth I am anti-literature."

As if in agreement, shallow agreement, with Gombrowicz's entirely self-serving quarrel with the idea of literature, many now regard the
Diary
instead of
Ferdydurke
as his greatest work.