Field Notes From a Catastrophe: Man, Nature, and Climate Change 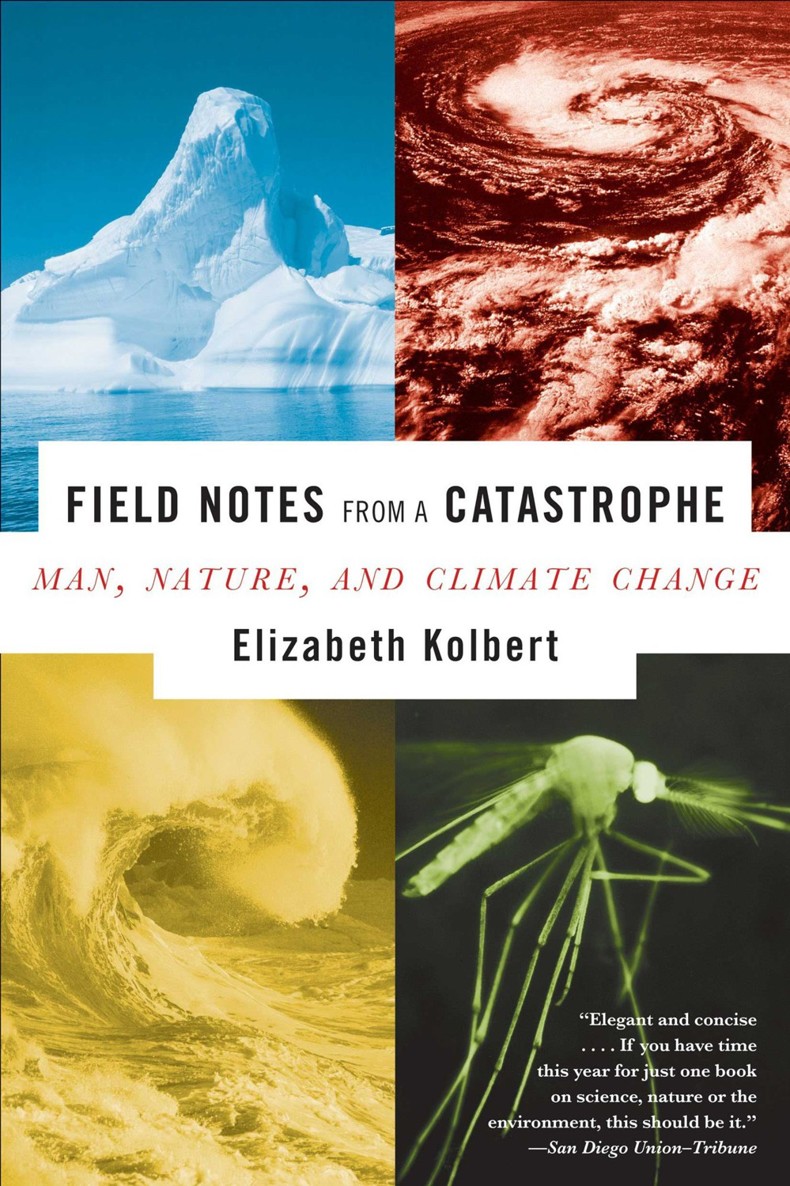 Praise for
Field Notes from a Catastrophe

“Each chapter is part of a larger narrative, a loose travelogue that includes the Alaskan interior, Iceland and the Greenland ice sheet, but, more important, these narrative elements, while drawing us in, always keep a larger purpose in sight—to offer the clearest view yet of the biggest catastrophe we have ever faced.”
—Los Angeles Times

“Comprehensive and succinct.”
—New York Times
“Elegant.”
—Chicago Tribune
“Kolbert weighs in with a slim but very powerful book.” —Chicago Sun-Times
“Essential reading. [Kolbert] is an accomplished writer whose prose is deceptively simple and whose meaning is always clear. Climate change is complex stuff, but she deftly distills the brew to clarity.”
—Minneapolis Star Tribune
“Gripping, well-written.”
—Seattle Times
“Short, readable and scrupulously objective … Kolbert’s central achievement is to have examined the complex panoply of data surrounding the science of climatology and to have presented it in prose as elegant as the facts themselves are stark.”
—Times Literary Supplement
“Very powerful … important.”
—Hartford Courant
“Enlightening.”
—Oregonian
“Field Notes is a wonderful read, a superbly crafted, diligently compressed vision of a world spiraling towards destruction. It should be a wake-up call to the world.”
—Observer (London)
“Kolbert is like Matisse, painting an evocative picture with a few deft strokes … I recommend [Field Notes] to anyone who has a concern for the fate of our planet.”
—American Scientist
“Kolbert, a staff writer for The New Yorker, surveyed the world’s leading climate scientists, and discovered an alarming unanimity to their message: The world needs to wake up, and fast.”
—Wired
“Let’s hope this powerful, clear and important book is not just lightly compared to Silent Spring. Let’s hope it is this era’s galvanizing text.”
—Scientific American
“An elegant ride through the confusing world of climate science. Kolbert takes a John McPhee–style ramble across the world: In Greenland, Iceland, and poor little Shishmaref, she sees the effects of warming firsthand. In Washington, D.C., the former New York Times political reporter puts her Beltway savvy to use, revealing that the most climate-change skepticism originates in the deep pockets of oil and coal companies.”
—Outside
“Keenly observed and deeply memorable … the picture [Kolbert] draws is compelling—and very scary.”
—Seed
“An extraordinary piece of reporting.”
—Grist.org
“Kolbert forces us to ponder a tragic disconnect: Politicians, the group best positioned to do something about the scientists’ warnings, turn out to be the group that’s most adamantly ignoring those warnings.”
—Austin American-Statesman
“[Kolbert] traverses the globe to observe first hand the jaw-dropping results of climate changes… species going extinct, polar caps melting, water rising in the Netherlands or butterflies in England migrating to higher elevations than ever before.”
—Contra Costa Times
“The hard, cold, sobering facts about global warming and its effects on the environment that sustains us. Kolbert’s Field Notes from a Catastrophe is nothing less than a Silent Spring for our time.”
—T.C. Boyle, author of Talk, Talk
“Kolbert mesmerizes with her poetic cadence in this riveting view of the apocalypse already upon us.”
—Robert F. Kennedy, Jr., author of Crimes Against Nature
“Reading Field Notes from a Catastrophe during the 2005 hurricane season is what it must have been like to read Silent Spring forty years ago. When you put down this book, you’ll see the world through different eyes.”
—Sylvia Nasar, author of A Beautiful Mind
“[I]f you know anyone who still does not understand the reality and the scale of global warming, you will want to give them this book.”
—Jonathan Weiner, author of The Beak of the Finch
“This country needs more writers like Elizabeth Kolbert.”
—Jonathan Franzen, author of The Corrections
“Deliver[s] an exceptionally clear picture of how global warming is already on us and what disasters lie in wait should we fail to act.”
—Salon
“The brilliance of Field Notes from a Catastrophe flows from Kolbert’s gift for making the violence of climate change feel vast yet intimate … Her field-journal format adroitly bridges the gulf between professionals and amateurs, giving the writing a conversational tone without compromising the science.”
—Slate

Field Notes from a Catastrophe

No part of this book may be used or reproduced in any manner whatsoever without written permission from the publisher except in the case of brief quotations embodied in critical articles or reviews.

Chapter 1: Shishmaref, Alaska
Chapter 2: A Warmer Sky
Chapter 3: Under the Glacier
Chapter 4: The Butterfly and the Toad

There isn’t much to do at the Hotel Arctic except watch the icebergs flow by. The hotel is located in the town of Ilulissat, on the west coast of Greenland, four degrees north of the Arctic Circle. The icebergs originate some fifty miles away, at the end of a long and fast-moving ice stream known as the Jakobshavn Isbrae. They drift down a fjord and through a wide-mouthed bay, and, if they last long enough, end up in the North Atlantic. (It is likely that the iceberg encountered by the
Titanic
followed this route.)

To the tourists who visit the Hotel Arctic, the icebergs are a thrilling sight: beautiful and terrible in equal measure. They are a reminder of the immensity of nature and the smallness of man. To the people who spend more time in Ilulissat—native Greenlanders, European tour guides, American scientists—the icebergs have come to acquire a different significance. Since the late 1990s, the Jakobshavn Isbrae has doubled its speed. In the process, the height of the ice stream has been dropping by up to fifty feet a year and the calving front has retreated by several miles. What locals now notice about the icebergs is not their power or immensity—though they are still powerful and immense—but a disquieting diminishment.

“You don’t get the big icebergs anymore,” an Ilulissat town councilman named Jeremias Jensen told me. We were having coffee on a late-spring afternoon in the Hotel Arctic lobby. Outside, it was foggy and the icebergs seemed to be rising up out of the mist. “It’s very strange the last few years; you can see a lot of strange changes.”

This is a book about watching the world change. It grew out of three articles that I wrote for the
New Yorker
magazine, which ran in the spring of 2005, and its goal remains much the same as that of the original series: to convey, as vividly as possible, the reality of global warming. The opening chapters are set near or above the Arctic Circle—in Deadhorse, Alaska; in the countryside outside of Reykjavík; at Swiss Camp, a research station on the Greenland ice sheet. I went to these particular places for all the usual journalistic reasons—because someone invited me to tagalong on an expedition, because someone let me hitch a ride on a helicopter, because someone sounded interesting over the telephone. The same is true of the choices that were made in subsequent chapters, whether it was a decision to track butterflies in northern England or to visit floating houses in the Netherlands. Such is the impact of global warming that I could have gone to hundreds if not thousands of other places—from Siberia to the Austrian Alps to the Great Barrier Reef to the South African fynbos—to document its effects. These alternate choices would have resulted in an account very different in its details, but not in its conclusions.

Humans aren’t the first species to alter the atmosphere; that distinction belongs to early bacteria, which, some two billion years ago, invented photosynthesis. But we are the first species to be in a position to understand what we are doing. Computer models of the earth’s climate suggest that a critical threshold is approaching. Crossing over it will be easy, crossing back quite likely impossible. The second part of this book explores the complicated relationship between the science and the politics of global warming, between what we know and what we refuse to know.

My hope is that this book will be read by everyone, by which I mean not only those who follow the latest news about the climate but also those who prefer to skip over it. For better or (mostly) for worse, global warming is all about scale, and the sheer number of figures involved can be daunting. I’ve tried to offer what is essential without oversimplifying. Similarly, I have tried to keep the discussion of scientific theory to a minimum while offering a full-enough account to convey what is truly at stake.

The Alaskan village of Shishmaref sits on an island known as Sarichef, five miles off the coast of the Seward Peninsula. Sarichef is a small island—no more than a quarter of a mile across and two and a half miles long—and Shishmaref is basically the only thing on it. To the north is the Chukchi Sea, and in every other direction lies the Bering Land Bridge National Preserve, which probably ranks as one of the least visited national parks in the country. During the last ice age, the land bridge—exposed by a drop in sea levels of more than three hundred feet—grew to be nearly a thousand miles wide. The preserve occupies that part of it which, after more than ten thousand years of warmth, still remains above water.

Shishmaref (population 591) is an Inupiat village, and it has been inhabited, at least on a seasonal basis, for several centuries. As in many native villages in Alaska, life there combines—often disconcertingly—the very ancient and the totally modern. Almost everyone in Shishmaref still lives off subsistence hunting, primarily for bearded seals but also for walrus, moose, rabbits, and migrating birds. When I visited the village one day in April, the spring thaw was under way, and the seal-hunting season was about to begin. (Wandering around, I almost tripped over the remnants of the previous year’s catch emerging from storage under the snow.) At noon, the village’s transportation planner, Tony Weyiouanna, invited me to his house for lunch. In the living room, an enormous television set tuned to the local public-access station was playing a rock soundtrack. Messages like “Happy Birthday to the following elders…” kept scrolling across the screen.

Aliens In The Family by Margaret Mahy
Maria Hudgins - Lacy Glass 02 - The Man on the Istanbul Train by Maria Hudgins
Asperger's on the Job: Must-Have Advice for People With Asperger's or High Functioning Autism, and Their Employers, Educators, and Advocates by Rudy Simone
Scarred Hearts (Blackrock) by Kelly, Elizabeth
The Laws of our Fathers by Scott Turow
A Thin Line by Tammy Jo Burns
Anita Mills by Scandal Bound
1001 Dark Nights by Lorelei James
A Soul for Vengeance by Crista McHugh
Storm Front by Robert Conroy
Our partner