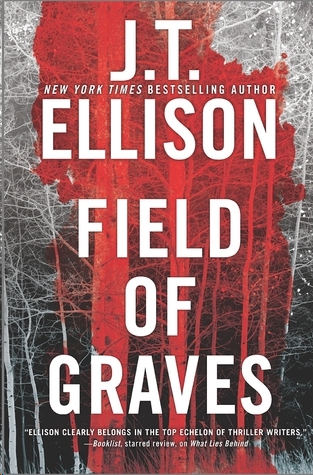 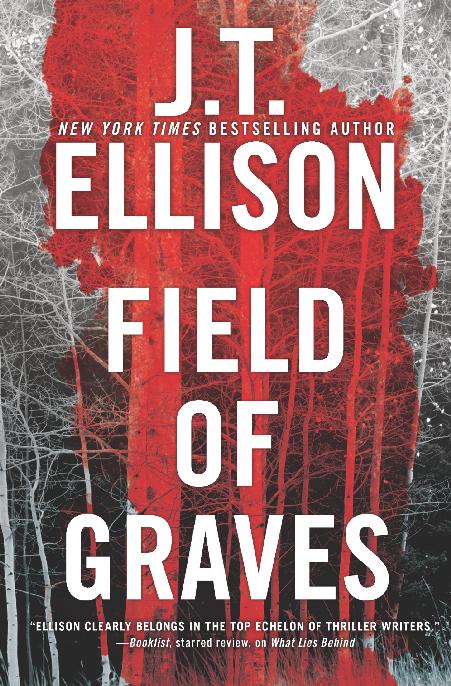 With FIELD OF GRAVES,
New York Times
bestselling author J.T. Ellison goes back to where it all began…

All of Nashville is on edge with a serial killer on the loose. A madman is trying to create his own end-of-days apocalypse and the cops trying to catch him are almost as damaged as the killer. Field of Graves reveals the origins of some of J.T. Ellison’s most famous creations: the haunted Lieutenant Taylor Jackson; her blunt, exceptional best friend, medical examiner Dr. Samantha Owens; and troubled FBI profiler Dr. John Baldwin. Together, they race the clock and their own demons to find the killer before he claims yet another victim. This dark, thrilling and utterly compelling novel will have readers on the edge of their seats, and Ellison’s fans will be delighted with the revelations about their favorite characters.

Praise for the novels of J.T. Ellison

“A genuine page-turner… Ellison clearly belongs in the top echelon of thriller writers. Don’t leave this one behind.”

—
Booklist
, starred review, on
What Lies Behind

“Thriller fanatics craving an action-packed novel of intrigue will be abundantly rewarded!”

—
Library Journal
on
What Lies Behind

“Fans of forensic mysteries, such as those by Patricia Cornwell, should immediately add this series to their A-lists.”

“Full of carefully mastered clues…a true thrillfest that will keep readers on the edge of their seats until the very end.”

—
Suspense Magazine
on
When Shadows Fall

“A gripping page-turner…essential for suspense junkies.”

—
Library Journal
on
When Shadows Fall

“Bestseller Coulter (
Bombshell
) teams with Ellison (
Edge of Black
) on a thriller that manages to be both intricate and full of jaw-dropping action sequences.”

—
Publishers Weekly
on
The Final Cut

“Mystery fiction has a new name to watch.”

WHERE ALL THE DEAD LIE

SO CLOSE THE HAND OF DEATH

ALL THE PRETTY GIRLS

For Joan Huston,
who championed this book way back when,
and assured me it stood the test of time.

And, as always, for Randy.

Excerpt from
All the Pretty Girls
by J.T. Ellison

When the Lamb broke the fourth seal, I heard the voice of the fourth living creature saying, “Come.” I looked, and behold, an ashen horse; and he who sat on it had the name Death; and Hades was following with him. Authority was given to them over a fourth of the earth, to kill with sword and with famine and with pestilence and by the wild beasts of the earth.

Taylor picked up her portable phone for the tenth time in ten minutes. She hit Redial, heard the call connect and start ringing, then clicked the Off button and returned the phone to her lap. Once she made this call, there was no going back. Being right wouldn’t make her the golden girl. If she were wrong—well, she didn’t want to think about what could happen. Losing her job would be the least of her worries.

She set the phone on the pool table and went down the stairs of her small two-story cabin. In the kitchen, she opened the door to the refrigerator and pulled out a Diet Coke. She laughed to herself. As if more caffeine would give her the courage to make the call. She should try a shot of whiskey. That always worked in the movies.

She snapped open the tab and stood staring out of her kitchen window. It had been dark for hours—the moon gone and the inky blackness outside her window impenetrable—but in an hour the skies would lighten. She would have to make a decision by then.

She turned away from the window and heard a loud crack. The lights went out. She jumped a mile, then giggled nervously, a hand to her chest to stop the sudden pounding.
Silly girl
, she thought.
The lights go out all the time. There was a Nashville Electric Service crew on the corner when you drove in earlier; they must have messed up the line and a power surge caused the lights to blow
.
It happens every time NES works on the lines. Now stop it. You’re a grown woman. You’re not afraid of the dark
.

She reached into her junk drawer and groped for a flashlight. Thumbing the switch, she cursed softly when the light didn’t shine. Batteries, where were the batteries?

She froze when she heard the noise and immediately went on alert, all of her senses going into overdrive. She strained her ears, trying to hear it again. Yes, there it was. A soft scrape off the back porch. She took a deep breath and sidled out of the kitchen, keeping close to the wall, moving lightly toward the back door. She brought her hand to her side and found nothing.
Damn it.
She’d left her gun upstairs.

The tinkling of breaking glass brought her up short. The French doors leading into the backyard had been breached. It was too late to head upstairs and get the gun. She would have to walk right through the living room to get to the stairs. Whoever had just broken through her back door was not going to let her stroll on by. She started edging back toward the kitchen, holding her breath, as if that would help her not make any noise.