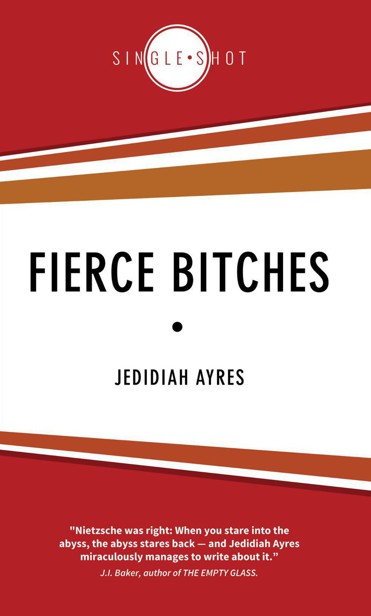 All rights reserved. No part of this book may be reproduced or transmitted in any form or by electrical or mechanical means including photocopying, recording or by any information storage and retrieval systems without the written permission of the publisher, except where permitted by law and for purposes of review.

This book is a work of fiction. Names, characters, places and incidents are the products of the author’s imagination or are used fictitiously and any resemblance to actual events or persons, living or dead, is entirely co-incidental.

The retard was well past lit for the fifth straight night and cranking a fucking harsh calliope waltz out of Ramon’s jangled nerves. The pleasure Ramon took from beating his ass was beginning to lose its sharp edge. Becoming just another duty. Collect the cash, take out the trash, order tampons, beat the retard’s ass. With a sigh, he grabbed his bat from behind the bar and walked across the cantina’s concrete floor to where the dipshit gringo was harassing some of the whores.

He beat the retard’s ass. Tossed him out. Again.

Later, he took Consuela to his bed, and silently articulated his frustrations to her. His facial expressions changed with glacial speed and she watched with the patience of a saint from across the mat, Ramon smoking while she languidly stroked his bare chest with her nails – ceasing and retreating at just the right time, resuming occasionally. Ramon didn’t even bother trying to get it up, but he liked listening to her not say anything.

The truck rumbled up to the cantina early the next morning and he dressed unaware of all the small things he was doing for the last time; running his tongue over straight teeth, walking without a limp, following orders.

Hauling a case of liquor between them, Ramon and the driver shuffled through the cantina’s entrance and he met the retard’s eyes hiding just inside doorway with the other gringo.

Was that a bottle in his hands? Fuck.

Maria is upset. Her chubby fingers, trembling, can’t cover her mouth sufficiently to smother the sobs. Wakes you up. Judging by the light coming through the gaps in the tin roof, it’s near nine. The atmosphere is like an amniotic sac.

Her reply is lost on you. She sounds like a Pentecostal Rosie Perez, frothing and speaking a hundred miles an hour. Four months here and you haven’t grasped the language. Haven’t even tried. You aren’t planning on sticking around.

“English. Speak English
por favor
.” Hysterical shrieks. “No, forget I said anything. I need a smoke.” You fish through your clothes beside the bed mat, till you see the cigarettes on her table. Clothed only in sweat, you stand and strike a match. She still sounds like a maniac, running in circles around the room. You grab her by the shoulders to slow her down, and speak very deliberately.

“What...is...your...problem?” She slaps you hard across the face and chest and you slap her back. She grabs your clothes, tosses them outside the hut and pushes you after them. Fine with you. You haven’t paid yet.

The dust clings to your damp parts. In this heat, that’s pretty much an entire outfit. You collect your clothes and carry them under your arm as you start toward the cantina.

You’ve been to Mexico once before, but this time had fuck all to do with Sammy Hagar and margaritas. This was all dust and rocks and heatstroke, skin turning to leather and sunshine so intense, your balls disappear when you squint. The Sierra Madres hemming you in sounds good for a movie, but actually makes you feel like a fish in a bowl.

You make your way barefoot toward the only road around, trying like hell to extract some nutrients from your cigarette. The dog carcass from the day before has been disappeared from the roadside and you make a mental note not to chance Ramon’s stew today.

A debris cloud still hangs in the air, which means an automobile instead of a mule cart has come by recently. That could indicate a couple of things: A. Extra shipment this week or B. Trouble in paradise.

A half-dozen tin shacks like Maria’s pock the desert in no particular pattern. Thrown up without a thought to symmetry or community. A crowd gathers outside the furthest, next to the cantina. The cloud settles behind a black Cadillac, which means the answer is in fact B.–Polito sent his muscle to settle something.

The crowd is comprised entirely of women, the whores who live here at the whim of Harlan Polito - who is decreeing judgment from on high back in the States. Also here by his will is a small group of gringos; roughnecks, punks and psychos who do dirty deeds for money and pleasure. You belong to this group. You stay here till the man sends for you to return to the bosom of society and contribute again.

No one seems to notice your nakedness as you approach, not even Metcalf, who comes out to meet you.

“Dude.” Metcalf, the near retard you’re reduced to socializing with these days, is trying to relay gravity with his tone.

“S’up?” you offer in his native tongue.

Dirty Dick, the oldest, most senior of the gringos. A stone cold killer. You all look up to him. He’s a legend back home. Killed five men, bad motherfuckers all, in one hit. Disappeared after that one, years ago. No one knew if he was dead or relocated. No one but you. Nearly plotzed when you’d met him here. Retired. Kicking back in old Mexico, getting stoned, getting pussy, getting fat.

As you speak, the crowd parts and two beefy guys in black suits–the uniform of a Polito dipshit henchman–haul a dead man by his arms, his heels dragging in the dust, from the cantina to the back of the car. As they drop him into the trunk, you recognize the corpse as Conrad, one of the other gringos living here. His front is blackened with blood. His own, judging by the color of his face and the gash in his throat.

Metcalf is rooted there; breathing through his open mouth, glad to have another civilized white man to stand next to. He doesn’t answer. You start to pull your pants on. The sight of your dead friend, scumbag that he was, seems to require a gesture of dignity, even one as feeble as this. The two men had disappeared back inside the cantina and reappear now dragging another body, this one female and local. It’s a Maria, one of the prostitutes. All the women here were prostitutes the gringos call Maria, but this is Dick’s Maria, plain as day.

Dick is the third body hauled out. Though beaten and bloody, he’s definitely breathing as they drop him on top of the other two and slam the trunk. The henchmen get in either side of the Cadillac’s front seat.

Ramon, the barkeep, catches your eye as the car backs up and drives away. The crowd turns to watch it go, but you study Ramon grinning after the hearse. It’s always bad news when Ramon is happy. He wipes his face with his right hand and you notice his knuckles. Broken. Swollen. Bloody.

You get good and drunk. Pass out late in the afternoon. In the meantime, you gather a loose narrative from Metcalf: Dick and Maria had a spat about the new Maria he’d been spending time with. She’d taken Conrad back to her place to piss Dick off.

Got them all killed.

Ramon is replacing the lock on his door, which looks kicked in. The safe he keeps behind the bar is compromised. There’s no reason for more security. The only times anyone steals or kills here; there are immediate and permanent repercussions. You guess that after slicing their throats, Dick’s idea was to grab the money and run over the mountains. A hasty, ill-conceived plan fueled by jealousy, tequila and boredom. Simple in concept, the killing and theft was no big thing. He’d murdered them as they slept, and Ramon’s safe could be violated with a can opener, but escape?

Escape is a bitch. A man alone and on foot would have to be crazy to try.

You wake up an hour or so past dusk. In a heap. In the gutter. Smelling like piss. You just hope it’s your own. Ramon’s little ghetto blaster is on eleven, in the back of your consciousness, broadcasting some station that plays mariachi music. All those greaser tunes sound the same, so it’s hard to know how long you lay there drifting in and out. But you wake up long after midnight, naked once again, while Maria washes you with a sponge.

You are in her hut, but you have no idea how you got there or why she’s taken you in again. Just her nature, you suppose.

She stares at you with those spooky, mongoloid eyes of hers. She is stripped to the waist, cradling your head between her breasts, which brush against your cheeks as she wrings water out, wiping away your guilty stains.

She speaks softly to you. All is forgiven, it seems. You feel an unfamiliar sensation in your gut. Shame. Shame about the way you’d treated her that morning. She’d lost a friend too - not the first - to this place.

You fall into your usual pattern, carrying on two mutually exclusive conversations. Each language a bastion of solitude and anonymity. You have no idea how her conversation went, but yours tend to go like this:

You: What was he thinking, killing Conrad like that? And over what? Some passed around piece of beaner trim.

Her: It makes perfect sense. Stupid. But flawless logic.

You: How’d you get that scar on your thigh? Looks like someone used a knife.

Her: Only reason to. It made sense.

Her: Son of a bitch with a knife.

You: Why are you here?

You: Actually this is payment for my sins.

Her: What’s the difference?

You: One’s reward. One’s punishment. One you earn. One you owe.