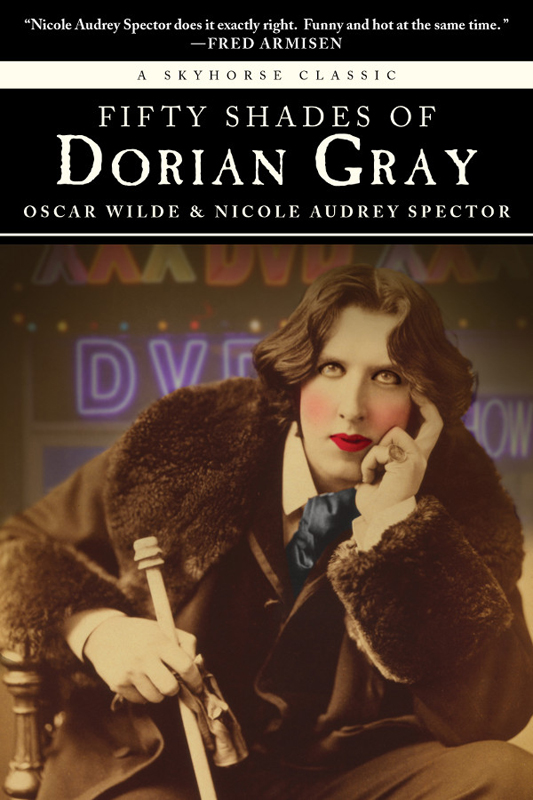 All Rights Reserved. No part of this book may be reproduced in any manner without the express written consent of the publisher, except in the case of brief excerpts in critical reviews or articles. All inquiries should be addressed to Skyhorse Publishing, 307 West 36th Street, 11th Floor, New York, NY 10018.

T
he studio was filled with the rich odor of roses, and when the light summer wind stirred amid the trees of the garden, there came through the open door the heavy scent of lilac, or the more delicate perfume of the pink-flowering thorn. The soft breeze, infused with scent, tickled Rosemary Hall's neck, stirring the fine hairs on her nape.

It was certainly peculiar, she thought, this new awareness of feeling in her body. Even painting felt different. It was no longer just a preoccupation of mind and coordination, but a physical experience. The wetted brush was as sentient as her hand itself, and when it touched the canvas, her body stirred as if coming to life with each careful stroke.

And the daydreams she was having . . . oh, but at least those she could blink away. The dreams at night were the worst. They weren't nightmares, noâanything but, reallyâyet they left her deeply unsettled. Night after night, she awoke in a feverish sweat, her hips writhing on their own accord, the bed sheet coiled in a ball and clenched between her legs. It was so . . . real. Like he'd really been there. Drenched in sweat, she felt his phantom kisses linger on her cheeks.
Wherever were those dreams coming from?
Rosemary wondered. She avoided the answer. This was no time to get carried away with lust, she told herself, blushing as the word crossed her mindâa quick scurry across, then back into her subconscious.

Rosemary had just turned twenty years old and, having successfully shunned any prospects of marrying, had gotten her father to quiet on the matter. At least he was pleased with her achievements as a painter. Even her admirers were slowly deserting her. Some, like the incorrigible Buckley Brinsmead, for instance, were giving up after years of heated pursuit. It was a relief to be alone, unbothered, so that she could focus wholly on her passion. Hers would be an independent life revolving around artistic goals and nothing else.
Yes
, she thought, biting her lower lip. She would have to keep telling herself this.

From the corner of the divan of Persian saddlebags, watching Rosemary with her signature inscrutable expression, perched Helen Wotton. She was, as always, smoking an opium-tainted cigarette.

Rosemary stepped back from the easel so Helen could get a full look at the painting and felt relief as soon as she broke contact with the canvas. She needed to get away from that tall, looming thing. Hunger seized her with a sudden urgency, and she realized she'd had only half a biscuit to eat that day.
Oh, he would be so mad if he knew that was all she' d eaten . . . Was it because he cared about her or because he just wanted to be in control?
Rosemary silently scolded herself for even wondering. She needed a break; her back was tight and knotted, and her hands felt stiff as boards and filled with a numbing ether.

“So this is it?” Helen asked. “This is the masterpiece?”

Surprisingly, there was no sarcasm in Helen's voice. Her eyes flickered with amusement as she appraised the full-length portrait of the exquisitely beautiful young man.

“Nice and big,” she said to Rosemary, turning to her with a near smile.

Rosemary nodded and laughed with embarrassment.

“It's may be the biggest canvas I've ever used,” confessed Rosemary in a hushed voice.

“Well, your biggest or not, it's certainly your best work yet,” said Helen. “But what's really curious to me is that it may also be nature's best workâthe young man, that is.”

Rosemary nodded and tried to look particularly serious, but was distracted. An image of last night's dream flitted through her mind, forcing her to close her thighs to suppress the sudden ache between them. In the dream, he'd been on top of her, clutching her from behind, pushing her into the mattress, holding her hair like a strap as he thrust into her. She'd never felt a man inside her before, and expected it would be quite painful, but in the dream there was only excitement and build and a final explosion of sensation that caused her to wake with a cry.

“And quite the effect it has on you,” Helen said, interrupting Rosemary's replay of the dream. “You can't even look at the greatest work of your lifeâthe best part of
yourself
âin the eye.”

Rosemary laughed and shook her head, but what Helen said was true. While Rosemary could hardly avert her gaze from the young man when he was sitting in person before her, looking at him as a paintingâ
her
paintingâwas practically unbearable. This was her best work, surely, but its effect on her was unsettling. And the man it depicted . . . oh, he was perfect then, when he walked in to her studio, just as he was now, consuming the canvas, when she could feel her own desire for him bouncing back at her, mocking her. She had not only painted his hooded gray eyes, so dark and mysterious, but had painted her own desire in them. Yes, his full-lipped, mischievous smile she'd rendered with exactitude, but there, too, was her desire, the terrifying urge for his kiss.

“I don't think I shall send it anywhere,” said Rosemary. She put her head into her hands and slumped into the chair across from Helen, knocking into a lamp and catching it before it could fall and shatter.

“Please tell me you don't crash around like that before our young prince,” said Helen, raising a brow at the painting and lighting another opium-tainted cigarette. “Not that I don't love a good racket in this excruciating peace and quiet.”

Rosemary was no longer listening to Helen. She was back in last night's dream. He was holding her neck tightly, almost so tightly she thought she could chokeâyet she was unafraid. Her head swirled and lightened, her mind giving way to the blows of pleasure.

“No. I won't send it anywhere,” she repeated.

“Why is that, my dear?” asked Helen, continuing before Rosemary could answer. “You artist types are so mad,” she said, then scowled and said sarcastically, “Pardon me, only men may be mad. You, lovely lass, can only be hysterical.”

“As if I'd leave without an explanation,” said Helen. “But first let me say that a portrait like this would set you far above all the other women in England. That could well put you in last place among the most wretched of men, if you're lucky.”

“I know you will laugh at me,” said Rosemary, “but I really can't exhibit it. I've put too much of myself into it.”

On cue, Helen laughed cruelly. Her charred lungs seized the opportunity to lurch into a hacking cough. Rosemary smiled. She had never smoked a cigaretteâor anything elseâin her life.

“Upon my word, Rosemary, are you in love with this Adonis? He's a Narcissus! And you, well, you have intellectual expression and all that. But beauty, real beauty, ends where intellectual expression begins. The moment one sits down to think, one becomes all nose, or all forehead, or something horrid. Take any intelligent woman you can think ofâshe's hideousâand you are made hideous now thinking of her. Thinking destroys the harmony of the face. Your mysterious young friend, whose name you
will
tell me, assuredly doesn't think, I can tell you that. He's a beautiful, brainless creature who should always be here in winter when we have no flowers to look at and always here in summer when we want something to chill our intelligence. Don't deceive yourself, Rosemary: Men like that don't appreciate your busy little brain.”

“You don't understand me,” said Rosemary. “I am not in love with him. I should be sorry to be in love with someone as vain as him, who takes everything for granted. You shrug your shoulders? I'm telling you the truth. Dorian Gray is just good looks. And I am just brains, or art, or whatever you are. And you are just wealth and rank, Helen. We shall all suffer terribly for what the gods have given usâsuffer terribly.”

Rosemary was surprised by her own franknessâ however boldly she sought to live her life, she always tread lightly when it came to the possibility of harming someone's feelings. But Helen only narrowed her icy gaze.

“Dorian Gray? Is that his name?” she asked, walking across the studio toward Rosemary, who got up and paced around the painting.

“Oh, I can't explain,” said Rosemary with a sigh. “Let's just say I have grown to love secrecy. It seems to be the one thing that can make modern life mysterious or marvelous to us all. Somehow it brings a great deal of romance to life. It brings me pleasure, keeping him a secret. I suppose you think me awfully foolish about it?”

“Not at all,” answered Helen. “You seem to forget that I am married, and the one charm of marriage is that it makes a life of deception absolutely necessary for both parties. I never know where my husband is, and he never knows where I am. When we do meet to dine, we tell each other the most absurd stories with the most serious faces. He's not very good at itâI'm much better. I never get confused over the dates like he does. But better I never make a fuss. Best not to have a row.”

“I hate the way you talk about your married life, Helen,” said Rosemary, strolling toward the door that opened onto the garden. “I believe that you are really a very good wife, but that you are ashamed of your own virtues. You're an extraordinary woman, Helen. You never say a moral thing and never do a wrong thing. Your cynicism is simply a pose.”

“Being natural is simply a pose, and the most irritating pose I know,” cried Helen, laughing. And arm in arm, the two young women went out into the garden together and ensconced themselves on a long bamboo seat that stood in the shade of a tall laurel bush. The sunlight slipped over the polished leaves. In the grass, the white daisies were tremulous. Rosemary closed her eyes for a moment, luxuriating in the generous sunlight. She'd spent the past four summers here and was always grateful for the garden; a stroll within invigorated her in the morning and quieted her racing thoughts at the end of a long day at the canvas. She let go of Helen's arm and hugged herself, taking a deep, gracious breath inward. She was so tired she could fall asleep just like this. But just as she let herself relax, the image of Dorian Gray burst into her mind, his dark eyes ready to devour her. She gasped and opened her eyes.

Conklin's Foundation (Conklin's Trilogy) by Page, Brooke
The Pull Of Freedom by Barrett, Brenda
Nic's Devotion: An Endless Series: Book One by Sara Hess
To Wed a Scandalous Spy by Celeste Bradley
Caught Looking (Hot-Lanta Series) by Quinn, Meghan
Beowulf by Frederick Rebsamen
An Audience with an Elephant by Byron Rogers
Shelter for Adeline by Susan Stoker
Journey to the End of the Night by LOUIS-FERDINAND CÉLINE
Reflections in a Golden Eye by Carson McCullers
Our partner