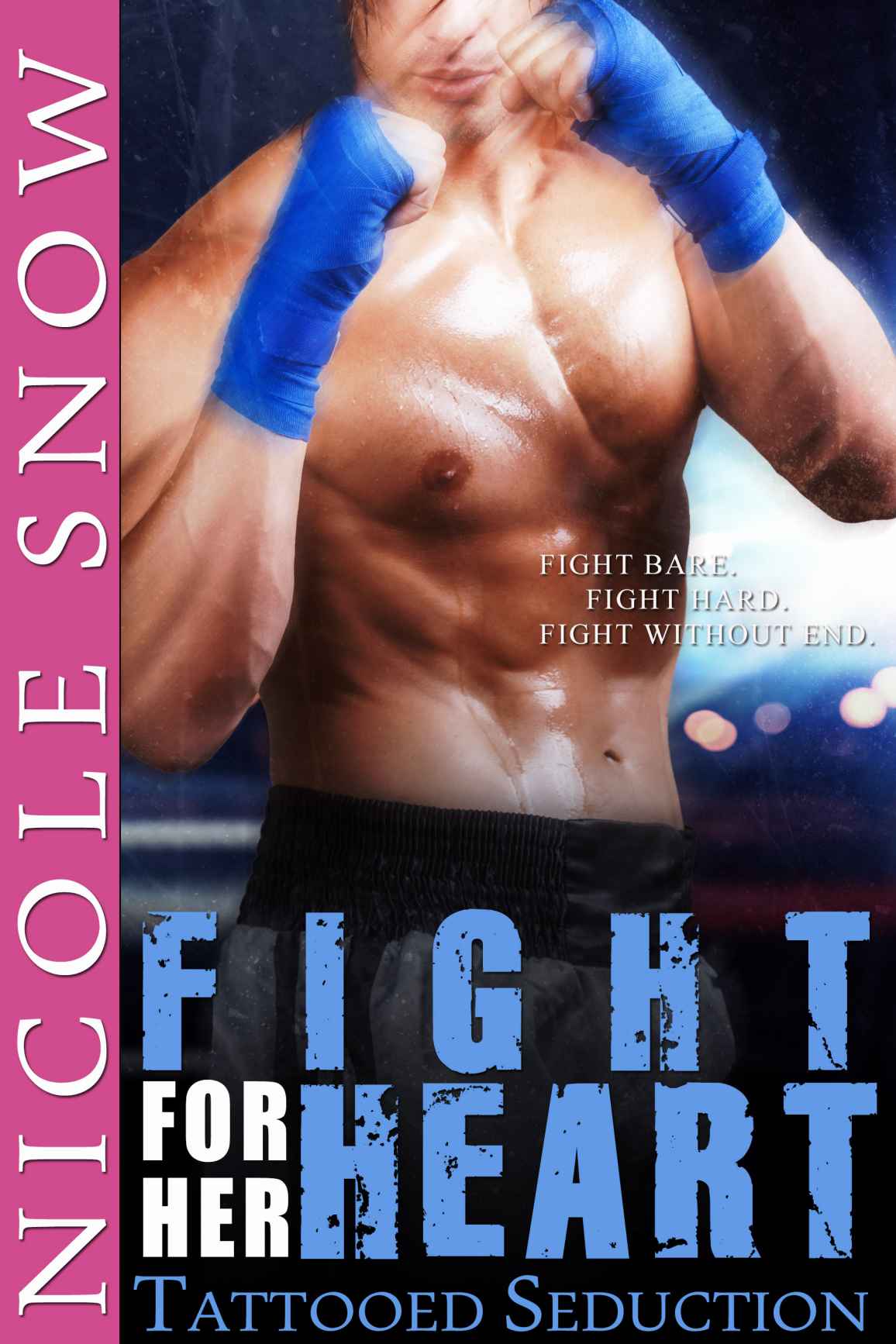 Fight
For Her Heart: Tattooed Seduction

Published
in the United States of America.

Disclaimer:
The following ebook is a work of fiction. Any resemblance characters
in this story may have to real people is only coincidental.

All
individuals depicted in this work are adults over the age of eighteen
years old.

Rose Merchante never anticipates danger
on a boring winter evening. Nor does she expect the hard bodied hero
who appears like a guardian angel, saving her from an unspeakable
attack. When her tattooed savior offers self-defense lessons, Rosie
discovers something else in her dormant flesh.

Hunger. Fire. Lust. The carnal calling
for his touch is unlike anything she's ever known.

Trainer and underground fighter William
Gaulle saved the beautiful woman in the alley without hesitation. But
Rosie's all temptress in his studio, awakening his deepest, primal
desires.

He wants a submissive to possess. She
wants a man to make her whole.

Soon, they're training long, hard, and
unprotected between the sheets, but a fighter's world has stern
demands...will Rosie be left behind, or can she carve a place in his
hardened heart forever?

William pinned me to the soft mat, a slab of rippling
muscle. He was still slick with sweat from the fight, casting his
aggressive, irresistible musk into the air.

I sucked adrenaline off him with every breath. When his
lips moved to mine, my eyes snapped open.

The spell of his scent lessened. Suddenly, I was wide
awake, and loving every second.

I
saw stars. His lips crashed mine, harder and hotter, going nova
.
Tiger stripes of pure lightning scorched down between my thighs,
converging at the place where my wetness jerked and convulsed.

It wasn't enough to know I wanted him. My body, my soul,
every molecule bristling inside me
needed
him.

His tongue curled deeper into my mouth, lapping and
searching, carving fiery circles meant to light me on fire.

“
Oh, fuck,” I whispered, quaking beneath him
as he broke the kiss. “No man's ever kissed me like that.”

“
Maybe no man ever wanted you like I do, Rosie.
Think you can handle this heat? Or are you gonna need a second to
cool before I melt every sweet inch of you?” He kissed me
again, quick and savory, his tongue lapping across my lips as he
peeled back so I could answer.

William wore a crooked grin, overflowing with
confidence. Did he really think I couldn't handle him?

I wanted to sound strong. Wanted to, and failed
miserably.

It was hard to talk at all with my nerves billowing up
like a forest fire.

“
Well, gather up your reserves and hold on tight,
baby. When this machine gets going, it doesn't stop. Not even when
you're begging. Not for anything.”

William pressed lower. His hips plowed their way between
my legs.

His stiff arm followed, furiously undoing the fabric
between us. He caught my skirt, tore it down my creamy thighs, and
then went straight for my panties.

In a flash, the sopping wet bundle snapped below my
knees. Now I was exposed, just minutes and seconds from taking him
deep inside me, straight to the core howling for his divine fire.

I'd worried the thug's attack had fucked up my senses
forever. But I didn't feel the panic filling my chest like heavy
cement.

That creep in the alley had ruined one liaison with
William. I gritted my teeth, pushing up into my man, silently vowing
that recent history wouldn't ruin another.

I needed his heat, his cleansing, purifying fire.

William Gaulle – the fighter, the lover –
had exactly what it took to punch the demons out of me, to grapple my
heart and soul tight to his beautiful flesh. He had the power to give
me a new beginning.

No, tonight I was going to have him, and prove that the
dark spell was broken. Nothing was worse than imagining my body
cringing at his smoldering kisses and roving clothes
again.
It
wouldn't – couldn't! – happen a second time.

I wanted to touch him like a woman in heat. Touch, kiss,
and then we'd move onto so much more...

No
more worries,
I thought, muscles across my frame contorting as he rubbed his bulge
along my slit.
This
is final.

“
Dig your nails into my back,” William
ordered. “I don't care if it hurts for you to hang on. I'm
gonna show you something raw and real, little Rose. I'm gonna burn
your sweet flesh to ashes.”

Holy shit. Where does he get off being so arrogant?

But William wasn't lying. He had a right to be a little
cocky.

After all, he spoke with the same certainty about
knocking out the big Ukrainian in the ring, and I hadn't believed it
would be so easy. But he'd done it.

Okay, fine. Maybe he had a right to be
a lot
cocky. It's not like it would matter – especially if he was
really as good with a woman as he claimed to be.

I heard the snap of the elastic waistband as his shorts
went down. He kicked them off, pushed forward, and the tip of his
swollen cock began its descent through my quivering silk.

My palms rested flat against his hot back. I imagined
his stripey tattoos folding and smoothing beneath my fingers, but
only for a second.

When his balls touched my flesh, signaling his deepest
point, I couldn't think of anything. My nails pinched his skin
automatically, holding on, preparing for the wild ride.

I threw my head back and screamed as his hips rolled
like thunder, heavy and immense, intent on overwhelming everything in
my soft little world.

I stepped out of the office, sucking in the cool winter
air.

Starr & Thayer's dim sign flickered behind me, a
melancholy reminder of the stuffy, drab world I'd just left behind.
In a few minutes, I'd be hugging my arms for warmth and cursing the
puffy snowflakes gliding onto the sidewalks.

But just now, they were what I needed, an icy splash to
the face. Winter's arctic marvels reminded me I was alive.

Alive and well after a whole day of clacking keys and
doing quality control on legal documents.

I had several more blocks to go to the bus station. It
was almost Christmas, and everybody at the adjacent offices was
packing it in early.

The streets were unusually lonely, like deserted
labyrinths exported from a dream. I walked on, timing my steps to the
fresh snow crunching underfoot.

I came to my shortcut. The narrow alley I always passed
through to get to the bus stop on the other end looked unusually
sinister today.

Somehow, the moisture made it slicker and darker, as if
the snow turned into an oily slime as soon as it passed through the
roof's shadows, coating the ground like thick mud.

I took another long breath, filling my lungs. I went in.

The big figure creeping toward me looked like a
businessman at first. He was just a black outline, so dark beneath
the dim lights above several dingy fire exits that I didn't think
much of it until he was on top of me.

And even if I'd noticed his features before he picked me
up and slammed me into the wall, I would've thought he'd pass
harmlessly by, just as all the other homeless looking men did. But
this stranger was no ordinary vagrant.

He threw his bulk into me as I tried to go around him.
The sudden motion was like getting nailed by a truck.

I opened my mouth to scream. Too late. Hard brick
impacted behind me, knocking the cold air out of my lungs, ratting me
to the bone.

His thick, leathery hand wedged itself over my mouth. My
jaw trembled against his fingers, breathing in the scent of a large
man with a beard who'd clearly had too much to drink.

“
What'sa matter, honey? Beautiful girl like you
shouldn't be alone out here. Not by a long shot.”

The giant's free hand clasped my knee, and he started
rubbing his way up my stockings, dangerously close to pushing under
my skirt.

My eyes flickered with horror. I jerked my head away and
released an ear splitting scream.

It didn't do anything but piss him off, delaying my
nightmare by a couple seconds.

“
You stupid fucking bitch. Shut those pretty lips,
or I'll shut them for you. Shut your mouth and open your legs
wide...”

He belched in my face. Sour, drunken fumes poured up my
nose, curdling the pure winter air.

I screamed again, flapping my wrists. I only managed to
batter his chest until the brute's hands grabbed mine, pushing them
over my head, onto the tombstone cold brick.

I just kept screaming through the thick scent of rotten
whiskey wafting from his mouth. I couldn't do anything about his
bulky strength, but if he was going to do this, I wasn't going to
make it easy for him.

Behind my shrieks, lessening as his beard scratched
angrily at my neck, I heard new crunching in the snow.

Oh, God. Please tell me he doesn't have a partner. I
can't stand one man, let alone several...

I started to weep. The last shred of sanity in my brain
snapped, and I alternated screams with desperate sobs as the big man
pushed his repulsive lips to my neck.

I opened my eyes just in time to see my attacker's huge
head snap back. His jaw was twisted at an unnatural angle. A second
later, he unleashed his own delayed scream, a guttural baritone cry
far more bloodcurdling than mine.

A tall, dark man shoved his way between us. He had his
back turned toward me as he spun to face my attacker. The new man
raised his sharp sneaker high in the air and brought it down on the
man's back.

The fat brute groaned pathetically. I shuddered with new
tears and backed away, clawing at the wall for support so I didn't go
tumbling into the snow.

What the hell is going on here?

The man who'd punched my would-be rapist wasn't even
wearing a coat. He wore long windbreaker pants and a hoodie. He was
lean and strong, skinnier than the bloated beast who'd almost done me
some serious damage.

Looked like he had eight, maybe ten years on me too.
Probably in his early thirties. A man in his prime, mature and
strong, a lion who'd worked hard to ripen himself to perfection with
age.

“
Don't move a fucking muscle,” he growled.
“The cops are on their way. Anytime now.”

No kidding. Sirens began to wail on the side of the
alley I'd been trying to reach.

Cherry-blueberry lights spun through the night, a
prelude to the mad snap of snow beneath boots. I cautiously
approached the man holding down my groaning assailant with his boot.

He turned to me just in time. “You alright, Miss?
I dialed my cell and ran up here as soon as I saw what was happening.
I was just coming out of my studio to get some fresh air.”

I nodded unevenly. My head spun, overheated and wild
like I'd had too much to drink.

I got a good look at my savior's face. Two beautiful
bright eyes were set in a hard face with a powerful jawline and a
small dusting of stubble.

He looked like a hockey player, or a soldier, or maybe a
well toned cop in his own right. He smiled, looked past me, and
motioned.

Swept Away by Marie Byers
Before Cain Strikes by Joshua Corin
To the End of the War by James Jones
Susan King - [Celtic Nights 03] by The Sword Maiden
Something I Can Never Have by Travis Thrasher
Jane Millionaire by Janice Lynn
Two Mates for a Magistrate by Hyacinth, Scarlet
Open Eyes (Open Skies) by Marysol James
House of Reckoning by John Saul
Good Manners for Nice People Who Sometimes Say F*ck by Amy Alkon
Our partner