Read Fight For Her (Soldiers in Arms Book 1) Online

Fight For Her (Soldiers in Arms Book 1) 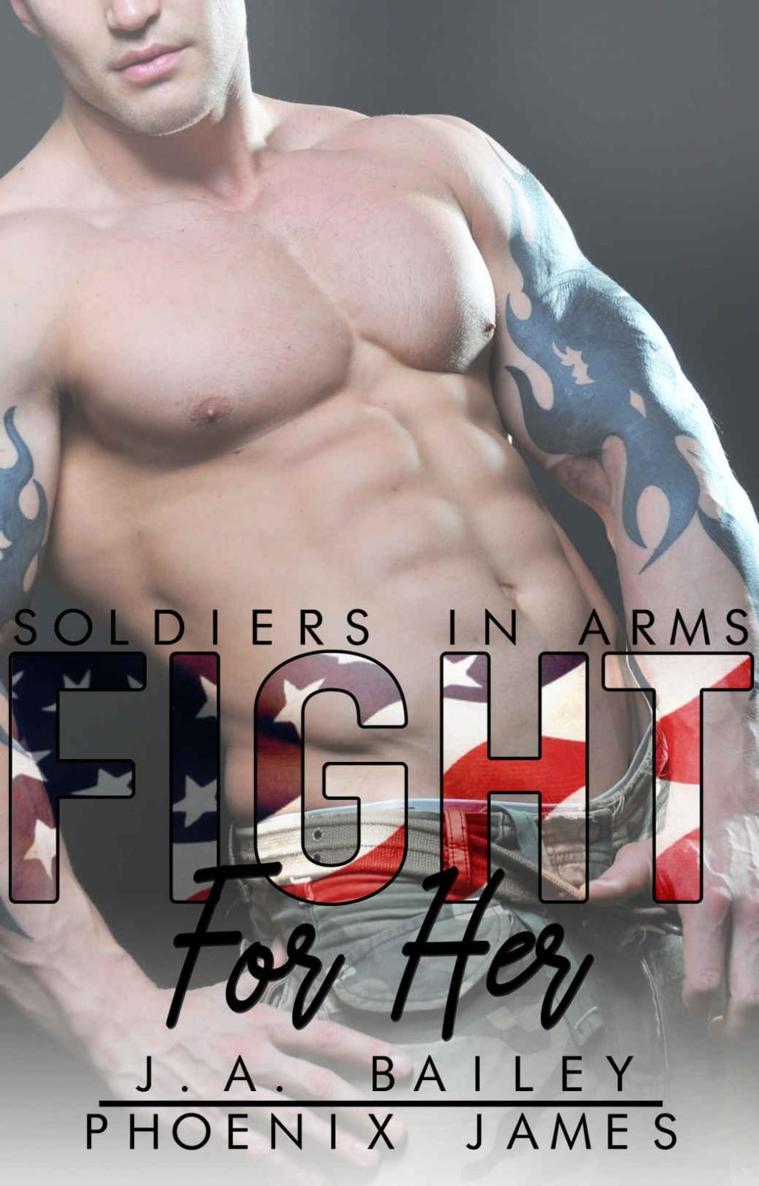 by J.A. Bailey and Phoenix James

All rights reserved. Any violation of this copyright is punishable by law.

When those big baby blues looked up at Walker, they gave a whole new meaning to the phrase ‘deer caught in headlights.’ He’d never hunted any fucking deer that looked like this.

The new waitress at his favorite haunt fumbled with some napkins and tried to dab away the beer she’d just thrown all over his jeans. His balls tightened. He glanced at the knowing grin of Rocco and snatched the honey blonde sweetie’s wrist.

Her cheeks flushed pink and his cock grew fucking rock hard. She dropped the napkin and dashed away to the bar. It wasn’t the first time he’d admired her pert ass in those tight black pants and it wouldn’t be the last, but he hadn’t gotten hard over her since she started working here over a week ago.

One look in those wide eyes and he’d been ready to jump from his seat and take her out back to get a real apology from her.

“Don’t even say it,” he warned Locke.

His friend smirked. “You’ve got a lot of competition.” The six-foot-five sergeant jerked his head to the tables behind him where every guy under the age of ninety was watching the new waitress. “You’d better take your shot before someone else does.”

Walker shook his head. As stunning as she was with her curvy ass and impressive rack, he had no intention of getting involved with her. The six of them—Locke, Gunner, Ryker, Rocco, Knox and himself—had been coming to the Fox Hole for years since being stationed at Fort Bragg. No matter where life took them, they always came back to the bar.

And they never fucked any of the women here.

Never piss in your own backyard.
Well, the same went for fucking. It he wanted a hot pussy, he could go find one easily enough. One that wouldn’t be able to chase after him and ruin the one place they could all call sanctuary.

No way. He wasn’t pursuing that girl.

“What’s her story anyway?” he asked, mentally kicking himself.

Waverly. He could almost imagine whispering that against her skin as he drove his cock deep into her. Who was he kidding? He
could
imagine it. And that golden skin would taste fucking beautiful.

“I thought you knew everything.”

Rocco chuckled. Walker glared at him. The soldier could be counted on to get them out of any situation. Somehow it didn’t matter where they were, the guy knew it all.

“She’s running from something.  She turned up with only a few boxes in her car and no money.”

“What’s she running from?” Gunner said.

Justice had owned the bar for as long as they’d been coming here. Rocco and she had an on/off relationship—if you could call the occasional fuck a relationship.

“You pissed her off again?” Locke asked, a knowing grin on his face.

“Justice is more than happy right now, let me assure you of that,” Rocco replied.

“How do you know she’s running from something?” Walker questioned.

“Who the hell treks halfway across the country with no belongings to work as a waitress?”

“Does she have any family here?”

Rocco shook his head. “Justice said she doesn’t talk about her past much. Thinks she’s from quite a bit of money. She’s certainly never worked as a waitress before. All she knows is she came from Maryland and stopped here, begging for a job.”

He peered over at her. Waverly was the most mind-fucking mix of cute and sexy as hell. He’d spotted dimples in her cheeks when she’d smiled but then she had those curves that begged to be touched…

“Why did Justice give her a job? She’s clearly not meant for waitressing.”

Rocco lifted a shoulder. “You know what Justice is like. Loves to take in strays.”

They murmured in agreement. A hush fell over them. They’d been coming to the bar for over a decade now. No matter where life took them or what it handed to them, they always stopped by to reconnect and wind down. The locals never bothered them and they got a few hours to be something other than soldiers for a while.

“Why the hell not?” Rocco shook his head in despair. “Hell, I’d have a try myself if Justice wouldn’t cut my balls off.”

Walker preferred girl-next-door types while Rocco went for glamorous women…movie stars, musicians, hell, he’d even taken a politician who was visiting when they were on tour in Afghanistan to bed.

“Look, I’m not getting involved with someone from the bar.”

Knox gave a sigh. “You and your damn rules.”

It wouldn’t be worth it. He’d made the mistake before and not been able to get rid of the woman. There were plenty who saw fucking a soldier as some weird badge of honor. Then once they’d gotten some, they’d hang around like a damned rash. He did not sleep with local women and Waverly wouldn’t change that.

It didn’t matter that he’d known these guys for most of his life or that they’d been through hell and back together, he still wanted to tear their fucking faces off for even looking at Waverly. There was something about her that made him feel out of control—and he wasn’t sure he liked that.

“If I don’t, someone else will.” Locke jerked his head over to where Waverly was serving one of the locals.

She beamed at him while he spoke to her, and it took all Walker’s willpower not to run over there and lay him out for even looking at her.

Rocco leaned in. “She won’t stay long. Chances are Daddy or husband or boyfriend will come looking for her and drag her home.”

Taking a drink of beer, Walker held the tanginess on his tongue before letting it slide down his throat while he considered the gorgeous blonde.

He’d been in a state of agitation since he’d first spotted her. All he’d thought about was her—while he showered, while he ate, while he fisted his cock… That wouldn’t change, he knew that for sure. Should he make his move and take the chance to feel that tight, sweet pussy around his cock before she was gone?

The throb in his trousers told him everything he needed to know.

“Fine. I’ll do it.” He put down the beer and ignored his friends’ matching grins before heading over toward Waverly.

Her feet pounded and she was fairly certain she needed a long, hot shower. Unfortunately, the shower in the room Justice was letting Waverly stay in went from hot to cold and back again in seconds, making it hard to have anything more than a quick wash.

God, she longed for her hydrotherapy shower. Every part of her hurt after a long night serving customers.

She snatched up a cloth and set to work cleaning down the tables. Without any customers, the bar seemed almost ghostly. Her footsteps echoed while glass clinked as Beth washed the glasses in the back and the occasional scratch of a pen could be heard as Justice totaled up the takings for the night.

Waverly paused at the table where all the soldiers had sat. She eyed one chair in particular which was still a little sticky from where she’d spilled a drink all over the man’s lap.

Jake Walker, he’d said he was when he’d come over to introduce himself and tell her not to be embarrassed about the accident.

How could she not be? She’d thrown beer all over a customer because she’d been too busy eyeing up every part of him.

Justice had told her that there would be soldiers that visited regularly, what with the base being so nearby. Waverly had never really been around any of the forces so she hadn’t been sure what to expect, but she’d imagined they wouldn’t interest her much.

How wrong she’d been. All of them had been attractive. All were strong and muscular. But Jake…She’d never seen a man like him.

She rubbed vigorously at the chair as though she could erase the memory of him sitting there.

Short dark hair, darker eyes that seemed to stare into the depths of her. Arms that nearly ripped the seams of his shirt. Damn, why did she have such a weakness for arms?

And his voice. Her pussy pulsed just when she recalled how he’d said her name. Deep and far too sexy, he’d almost had her coming on the first syllable.

She shook her head and moved onto the next table. Of course, she’d been too embarrassed to say much. She’d spent her whole life around men in suits. Even Adam had been one. She couldn’t recall any of
them
having such raw masculinity.

Hands to the table, she paused for a moment as a wave of exhaustion came over her. It wasn’t that she wasn’t used to working. She’d worked damn hard at her job at her father’s construction company, but she certainly wasn’t used to such physical work.

Or being in her condition.

Waverly smiled sheepishly. “Sorry, I was only pausing for a moment.”

Justice waved a hand. With long, dark hair and an athletic build, Waverly should have felt intimidated by her, but Justice had been the first person on her long journey to offer her some kindness.

“You’ve had a long day and worked hard.”

She grimaced. “I messed up. You saw me spill that drink.”

“Why don’t you finish wiping down the bar and head up to bed? You look beat.”

“Honey, you’re about as pale as a ghost.” Justice narrowed her eyes at her. “You sure you’re not sick?”

I Know Not (The Story of Fox Crow) by Ross, James Daniel
Red Heart Tattoo by McDaniel, Lurlene
Texas Tangle by Leah Braemel
Things We Left Unsaid by Zoya Pirzad
The Generals by W.E.B. Griffin
Robinson Crusoe by Daniel Defoe
Waiting for You by Heather Huffman
After The Apocalypse (Book 2): Church of Chaos by Griffin, Gen
Brie Learns Restraint (After Graduation, #5) by Red Phoenix
Prepare to Die! by Tobin, Paul
Our partner