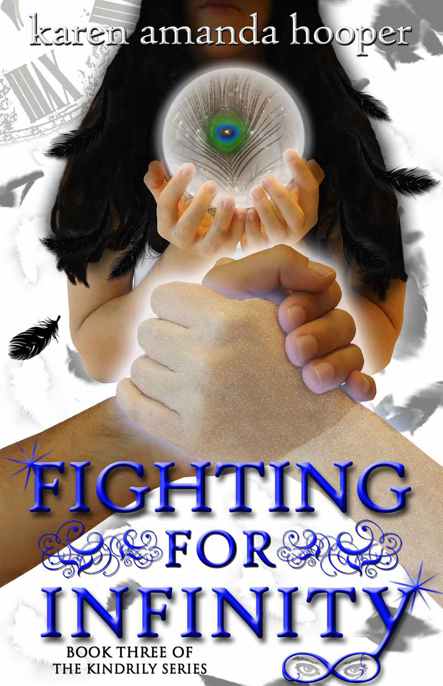 Book 3 of The Kindrily series

This ebook is licensed for your personal enjoyment only. This ebook may not be sold or given away to other people. If you would like to share this book with another person, please purchase an additional copy for each recipient.

No part of this book may be reproduced, stored in a retrieval system or transmitted in any form or by any means, electronic or mechanical, including photocopying, recording or otherwise, without prior permission of the publisher except for the use of brief quotations in a book review.

Visit author Karen Amanda Hooper on the Web at

I love writing these notes to you. I imagine us sitting on the Lunas’ back deck together while drinking hot chocolate, staring out at the red rocks of Sedona, gazing up at the stars, and chatting about the kindrily and their countless stories.

If you’ve read books 1 and 2 of this series, you know what I mean (and hopefully you’re smiling). If you haven’t read books 1 and 2, stop right here because I assure you, you will be lost if you try to read the series out of order.

For those who chose not to read the bonus chapters at the end of
Taking Back Forever
, (kudos to you for having such willpower) now is the time to catch up.

Harmony won’t be a narrator in this book, but she covered some important points at the end of
Taking Back Forever
, so I’m including the last couple chapters. Heck, even if you did read them, if it was more than a few days ago, read them again.

I hope you enjoy the conclusion to Maryah and Nathan’s story.

Dedicated to my mom,

the very first reader of
The Kindrily
,

and my first and very best friend.

“People they come together,
people they fall apart.
No one can stop us now,
'cause we are all made of stars.”

Dakota was in his usual spot, hunched over the desk in the library drawing furiously. I brought him a soda and set it down in front of him, but he didn’t look up from his work.

He glanced up as if finally realizing I existed. “I can’t. I have a lot of work to do.”

I worried about him more and more. Since his near-death experience, he’d been obsessed with his comic creating much more so than before. And then there was the issue of him believing he was an Element. He told Faith, Carson, and me that he was a changed person. He claimed he was one of us, and he believed—with all of his dear and hopeful heart—that his ability was creating reality through his comic books. If he drew it, it would happen.

I sighed and reached for his hand to stop him from drawing. “Dakota, you need to stop this.”

He tried pulling free, but I kept a tight grip on him. His eyes locked with mine.

“It sucks that you don’t believe me. But I know what I’m doing. You guys could help me by telling me what I should draw, but instead you’re probably talking behind my back about how nuts I am.”

We had talked about him a lot, but more out of concern for his
wellbeing.

“I wish you’d believe me,” Dakota pleaded. “I feel it, Harmony. I’m different.”

“You almost died, Dakota. Of course you feel different.”

“Not different in the way you see people talk about on television documentaries. I didn’t see the light and suddenly have a new appreciation for life. Different as in I feel my power coursing through me. I’m part of the kindrily now. I’m meant to help save our members and the world.”

Save the world. He’d been saying stuff like that since he woke up. He barely slept. He hardly ate or drank. He was so skinny he looked like he was on drugs.

For years Dakota’s only wish was to be an Element. His encounter with almost dying left him feeling invincible. And his damaged brain stem had probably created an alternate reality where his wish came true. No Element in all of time or existence had drawing the future as a supernatural ability.

“I miss spending time with you,” I said. “Let’s go ride dirt bikes.”

He tried pulling his hand away again, but I didn’t let go. He squeezed his pencil so tightly it snapped. “You should hang out with Gregory.”

“Gregory wants to get to know you. Why don’t you hang out with us?”

“After I finish this.”

But that was the problem. He never finished. Even when his body did finally run out on him, he’d toss and turn in bed with his pages clutched in his hands. He’d mumble in his sleep about saving the world and needing more pencils. It was disturbing to witness, and I didn’t know what to do to help him move past it. Worse, what if he never moved past it? I kept imagining him in a psych hospital, sedated and drooling all over himself.

“Please,” I pleaded. “Finish it later. Come hang out with me and get some fresh air and sunshine.”

“I can’t. Too much work to do and not enough time.”

I let go of his hand and sank back in my chair. He immediately started sketching again. His hand swept over the pages with such desperate purpose. I took a deep breath. I hated myself for what I was about to do. “I have a feeling there’s something we’re supposed to see or find if we go out, something that will help with your comics.”

His pencil paused, hovering over the page. Only his eyes lifted. “Really?”

“Yeah, the universe always gives us what we need. But you’re making it difficult to reach you because you stay cooped up inside all night and day.”

Dakota glanced around the library. “You’re right. Okay, where are we going?”

“I’m not sure yet,” I said, relieved that as awful as my fake
belief was, it worked and he’d get out of the house and back into real life. “We should stay open to wherever the universe wants to take us.”

“Sounds good.” He stood but grabbed a pad of paper and tucked a pencil behind his ear.

“You’re taking those with you?”

I sighed. My plan wasn’t as brilliant as I thought. “Okay, let’s go.”

“Wait. I need sunglasses.” Dakota ran out of the library. I traipsed out into the living room and waited, wondering if my plan would help or only make things worse. He came back wearing Carson’s shades. “Don’t want to chance the Nefariouns knowing who I am.”

“Right.” I nodded, putting on my own sunglasses.

We had created a delusional monster.

Riding was uneventful—especially since I was the one who rode while Dakota sat on the ground sketching.

We returned to the house for our usual evening round-table meeting and Dakota dragged in a stool from the kitchen and sat behind Carson. No one questioned his attendance anymore. The whole kindrily was aware of the problem, and since Dakota never said a word during any of the meetings, we allowed him to sit and sketch while we talked.

“The big question is will Dedrick come after any of us again?” I said. “Yes, it’s wonderful to live here together as a tightknit group, but it makes us a much easier target.”

“My worry is that he’ll retaliate,” Louise said. “We took Gregory from him.”

Gregory squeezed my shoulder. The feel of him being next to me was still surreal at times.

“And we killed one of his valued members in the process,” Carson added.

Dakota’s head snapped up. He was smiling. I don’t know what made him happier, that Carson mentioned what Dakota did, or that he referred to Dakota as one of us. “I doubt he’ll just accept that and leave us to live in peace.”

Maryah took a deep breath. Her confidence had grown leaps and bounds over the last couple of days. I didn’t know what she and Nate were doing while they were away together, but whatever it was seemed to be working.

“He knows I erased,” Maryah argued. “Therefore, he thinks my ability was erased too. And River will confirm that I was clueless about our way of life and my power. Maybe Dedrick won’t care about me anymore.”

“Which brings me to my next question,” Faith said. “Why did he take River and what does he have planned for him?”

“River never demonstrated any kind of power while you were with him?” Louise asked Maryah. “Not even a hint of something supernatural?”

“No,” Maryah said. “But April told me something last week when I went to visit her and her mom. River had been trying to contact me through her. He wanted her to tell me he didn’t want to be one of them.”

“April knows about us?” Amber asked with concern.

“No,” Maryah assured everyone. “I didn’t tell her anything. I spilled our secret in the past and created a never-ending chain of problems. I wouldn’t make that mistake again. April had no idea what River was talking about. She thinks he’s crazy. But obviously River meant he doesn’t want to be a Nefarioun.”

“He wants you to
think
he doesn’t.” Faith crossed her arms over her chest. “He tried to kill you. That’s as nefarious as it gets.”

“But Dedrick made him. We know that. The same way Gregory almost killed Harmony.”

“You said his eyes weren’t snakelike,” Nate pointed out. “His mind wasn’t being controlled.”

“Yes, but Dedrick had other ways of controlling him.” Maryah glanced around the table. “River depended on him for money and a place to live. Dedrick threatened to take all that away.”

“Ahh, yes,” I quipped. “Murder in exchange for food and shelter. Seems fair.”

Krista leaned forward. “Maryah, I know you always want to see the good in people, but River is no good. Now that he’s back with Dedrick, he’ll be even worse. Let it go. We need to focus on protecting ourselves. River can do the same.”

Dakota had stopped sketching. “Maryah,” he said. “If you could choose, would you want River to be good or evil?”

We all glanced at each other, not knowing what to do or say.

Dakota nodded then went back to sketching. If only it were that easy.