Figures of Fear: An anthology 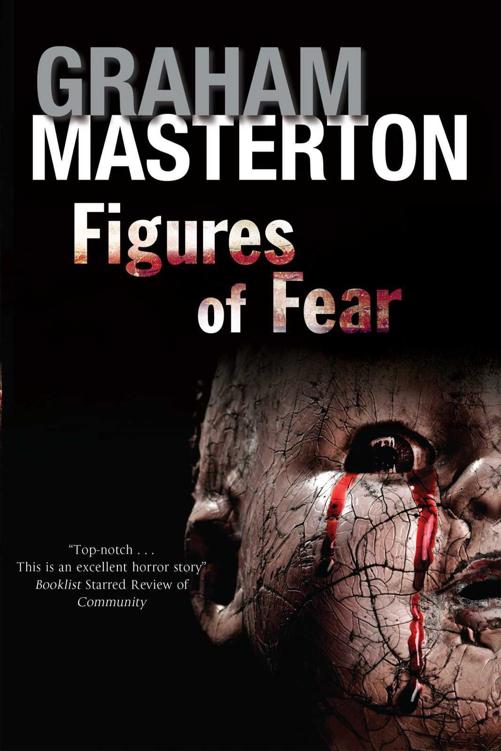 What the Dark Does

Night of the Wendigo

Spirits of the Age

The right of Graham Masterton to be identified as the author of this work has been asserted in accordance with the Copyright, Designs & Patents Act 1988.

F
rom the beginning of history, men and women have been haunted by figures of fear. They appear in many different shapes and disguises, from statues to animals to spiders to waif-like children. They frighten us to the point where we hang protective symbols and herbs around our doorways to keep them out, and say prayers to prevent them from harming us.

The reality is, however, that we have created these figures ourselves, in order to give a physical form to all of those things that we are afraid of: our dread of the inexplicable, and the terrible uncertainty we feel about never knowing what will happen to us next.

These figures represent everything from poverty and disease and madness and death to those horrors for which we have no names.

Many of them have become legendary. Satan is a prime example, with his horns and his hooves. Then there’s the Indian goddess Kali, covered in blood, naked except for her belt of severed heads. Or Damballa, the slithery voodoo serpent god; and bristly Coyote, the Native American trickster. Or the Irish banshees, with their screeching voices and their ragged dresses, who gather outside your house as somebody comes close to breathing their last.

There are literally thousands of them, in every culture and religion, representing every possible terror that you can imagine, and some that you should be thankful that you can’t.

But there are other figures of fear, closer to home. They are less well known but equally terrifying – if not more so – because they are so unfamiliar and yet so near to us.

That strange little girl with the deathly-white face who you see in your local churchyard, perhaps, but who vanishes when you turn away for a moment.

That limbless rubber doll that you find in a box in the attic, her pink skin turned amber with age, her eyes staring at you as if she knows what pain your future has in store for you, but refuses to tell.

That faceless statue in an alcove, in some small grey city in Eastern Europe, with dead bouquets heaped around its feet where people have been praying – but for what? For the statue to protect them from ill fortune? Or not to come alive at night and tap at their windows, warning them that their time is up?

In this collection, you will discover many new figures of fear – some of which appear to be innocuous when they are first encountered; others which instantly bring shock and horror.

However, they all have one thing in common. They have all haunted my imagination for years, and still do; and if you choose to go further and read this book, they will haunt you, too. They will never leave you alone, ever again.

You might see one of them reflected in a shop window, right behind you; or gravely looking down at you from some high window in an unfamiliar city. Maybe one of them will be standing on the opposite side of a canal, with no reflection in the water, staring at you as if you have been picked out for the most calamitous fate of all.

You have a choice. If you believe that these figures can really bring you bad luck, then close this book now. There are happier books, sunnier books, books that will reassure you that you have nothing to be scared of. But if you decide that they are nothing more than stories intended to frighten you, then please read on.

Only you can figure out how fearful you are.

Henry stepped out of the shadow into the sunlight and into the middle of the marketplace. All around him, stalls were selling melons and tomatillos and decorated leather belts and scarves and holy statuettes and sticky-looking cakes and dishwashing brushes and bottles of Radiante floor cleaner.

Mariachi music was playing loudly from competing loudspeakers precariously wired on top of the stalls, and the noise of shouting and laughing and dogs barking and parrots squawking was so deafening that Henry felt as if he had found himself in the middle of a riot.

He caught up with Esmeralda, who unexpectedly took hold of his hand, as if he were a child rather than a forty-five-year-old man with thinning brown hair and a flappy white linen suit.

‘You said that you wanted souvenirs, señor,’ she reminded him.

‘Well, yes. But something artistic, you know. Something truly Mexican, of course. But reasonably tasteful. I can’t give the head of my sociology department a plastic cactus.’

‘We will find something for you, señor,’ said Esmeralda, and continued to tug him through the crowds. Henry had no choice but to follow her, as much as he didn’t like being jostled. A gap-toothed man leered right in his face, holding up a necklace strung with large red chilli peppers.

‘Show your girlfriend that you are hot stuff, señor!’

‘She’s my guide, thanks,’ said Henry. ‘Not my girlfriend.’

He didn’t know why he had felt obliged to say that. After all, Esmeralda was stunningly pretty, with shiny brown curls and feline eyes and a mouth that seemed to be permanently pouting. The only trouble was that she was young enough to be his daughter.

‘I know what we buy for you!’ she said, as she pulled him through the acrid smoke that was wafting across from a
carne asada
stall. ‘I know exactly for sure what you would like!’

She led him down a shady alley by the side of the marketplace, where old men with faces like wrinkled gourds were sitting on doorsteps together, smoking. At the end of the alley there was a makeshift stall constructed of packing cases and blankets and sacking.

A roughly painted metal sign outside the stall said
Retablos
. Inside, a woman was sitting on a kitchen chair with an easel in front of her, painting a small sheet of metal with enamel paints from twenty or thirty different little brightly coloured pots.

The woman turned toward them. She must have been about forty years old, with high, distinctive cheekbones and hooded eyes that were as shiny and colourless as ball bearings. She wore a black scarf twisted around her head and a black dress with grey serpentine patterns on it.

‘Ah,’ she said, and her voice was deep and throaty, as if she had been chain-smoking Delicados cigarettes since she was old enough to breathe. ‘I have been waiting for you, señor.’

Without another word, the woman stood up and went to the back of her stall. She produced a small package wrapped in newspaper and handed it to him.

‘What’s this?’ Henry asked her.

Bewildered, Henry unwrapped the newspaper. Inside was a thin sheet of metal with a shiny picture painted on it, like a scene from a comic strip. It showed a city street, with a crowd of people standing on the sidewalk. A man in a white suit was lying in the middle of the street, with one arm pinned underneath the chassis of an overturned truck. He was cutting his own arm off with a large saw, and there was blood all over his sleeve.

Up above him, floating in the sky, there was a saintly figure dressed in blue and gold, and attended by golden cherubs.

‘It is simple,’ the woman told him, pointing to the man in the white suit with a long, silver-polished fingernail. ‘People come to me when they have survived a terrible accident, or a life-threatening sickness, or maybe they have been robbed and nearly killed. I paint for them an
ex-voto
, a thank you to the saint who saved their lives, which they will put up on the wall of their church.

‘In this case I have painted yours
before
your accident. Sometimes I can do that. It depends on who you are, and which saint will preserve you. In this case it is
La Virgen
de los Remedios
, Our Lady of the Remedies. She told me many weeks ago that you were coming, and what would happen to you, and how your life could be saved.’

Henry said, ‘What? You think I’m going to be run down by a truck?’

‘All fates are unavoidable, señor.’

‘I’m going to be run over by a truck and I’ll cut my own arm off to get free? That’s insane.’

The woman shrugged. ‘I do not decide the future, señor. I will sell you this
retablo
for twenty dollars. You will be able to thank Our Lady even before she has saved you.’

‘This is sick,’ said Henry. ‘This is totally sick.’

He twisted his hand from Esmeralda’s grasp and started to stalk back toward the marketplace.

Esmeralda called, ‘Señor Foster! Señor Foster! Wait!’ But Henry refused to turn around and angrily shouldered his way through the crowds.

He crossed the marketplace and walked back along the shadowy arcade that led to his hotel. His whole life people had treated him like he was some kind of a dupe and even now he was here in Mexico on business he was still being taken for a mark. He felt hot and sweaty and embarrassed and outraged.

Me You Us by Aaron Karo
Bride of the Castle by John Dechancie
Edge of Chaos (Love on the Edge #1) by Molly E. Lee
Smoke and Shadow by Gamal Hennessy
Protect and Correct by Hayse, Breanna
Confieso que he vivido by Pablo Neruda
Wish Club by Kim Strickland
The Overlords of War by Gerard Klein
Sergei's Stubborn Captive (The Captive Series Book 3) by Steele, C.M.
Hillerman, Tony by The Fly on the Wall (v4) [html]
Our partner