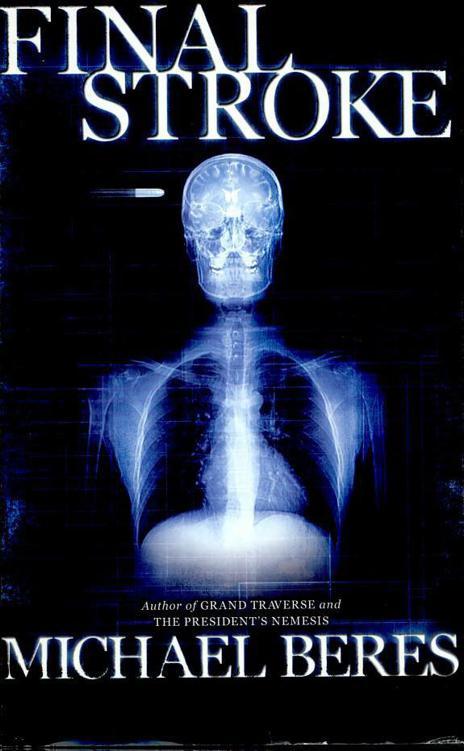 DEDICATION
:
To caregivers and those they care for
.

The MEDALLION PRESS LOGO is a registered tradmark of Medallion Press, Inc.

Names, characters, places, and incidents are the products of the author’s imagination or are used fictionally. Any resemblance to actual events, locales, or persons, living or dead, is entirely coincidental.

“Beres (GRAND TRAVERSE) goes one step beyond THE MAN? CHURIAN CANDIDATE in this engrossing thriller, which some
times seems too obvious but then foils expectations by twisting the reader’s mind along with that of the protagonist. Recommended for all popular fiction collections.”

“Conspiracy fanatics may enjoy Beres’s second novel (after GRAND TRAVERSE), a bizarre political thriller … The denouement would be at home in the tabloids.”

“A recent article in Publishers Weekly talked about how the current White House does not like that the publisher of this book has used the presidential seal on the cover because there are several bullet holes. I applaud Medallion Press for standing firm on its use of the artwork for this timely work of fiction. The novel is all about conspiracies, presidential assignations, and covert operations. Beres has written a very tense nail-biting thriller that is filled with several well fleshed out characters in tense situations. Beres sums up the discontent voters have for all politicians in this country very well in a few short sentences. THE PRESIDENT’S NEMESIS is a great political thriller.”

“Michael Beres has written a suspenseful novel that delves into paranoia as Stanley Johnson becomes involved in a convoluted plot to assassinate the President. Readers will enjoy Johnson’s plunge into madness as people and events beyond his control begin to take over his life. Beres’ plotting is brisk and full of twist and turns. Fans of Stephen King and Dean Koontz may want to check out this great beach read.”

“A
STROKE IS A BRAIN HURRICANE
. E
VERYTHING
’
S STILL THERE
,
BUT
torn up and mixed around in the soup. For example, last time we watched The History Channel at the rehab center, Babe Ruth is standing at the plate taking strikes and the next thing I know my husband is off and run
ning in his wheelchair before Babe hits his homer. It’s because the word strike relates to the word stroke, and the fact that the Babe’s first name is the same as our last name… When someone you know has a stroke, you look for keys to the past in the strangest places. It’s like history rewritten before your eyes… Maybe if world leaders had strokes we’ d all be better off because suddenly they’d see things in a new light. In this newer, more childlike world, the name Babe would be as common as, say, the names Smith or Johnson or Carter.”

In March, damage from the previous hurricane season was still obvious. Recovery was taking longer than expected and memories of that season would linger for a while, which meant at least until the next hurricane season. The March heat, plus the fact that no political campaigns were in progress, acted like a sedative to both tourists and natives. In Dade County the breeze was off the Everglades, the mug
giness making folks feel faint and disconnected from their bodies. But on the west coast, in Collier County, the breeze off the Gulf made for a perfect evening. Here on the Gulf Coast it was a different kind of warmth. A sleepy warmth as two white-haired men sat on the porch of a sprawling Naples, Florida, home that, although situated on a rise in the topography, sat low on its prime real estate like a bunker.

The two men watched as the red ball of sun headed down into the Gulf. Optical illusion created a sun grown in size as if it were going into nova and would toast the folks heading out on the fishing pier to get the best view. The folks on the pier stepped gingerly around peli
can shit, the pelicans flew back in to feast on fish heads, and the fish
ermen who had provided the fish heads stared out into the Gulf where their lines glistened like red-hot filaments.

Both Valdez and Hanley were natives who understood south Flor
ida’s weather better than any Chicagoan would. Hanley had been a native almost five years since his move from Virginia. Valdez was a born native, having held a post at the Miami office for forty years. Although Valdez was younger than Hanley, both men were obviously past their prime. Valdez wore dress slacks, a short sleeve shirt, and black shoes. Hanley wore shorts, a tank top, and sneakers. Sunglasses hid their eyes.

A Guile of Dragons by James Enge
Waiting to Exhale by Terry McMillan
The Redemption of Darius Sterne by Carole Mortimer
Beneath the Badge (First Responders) by Alward, Donna
The Gingerbread Boy by Lori Lapekes
A Tale of Two Demon Slayers by Angie Fox
Burn This! (A 300 Moons Book)(Bad Boy Alphas) by Tasha Black
Forever in My Heart by Jo Goodman
Supernatural--Cold Fire by John Passarella
Cry Me A River by Ernest Hill
Our partner