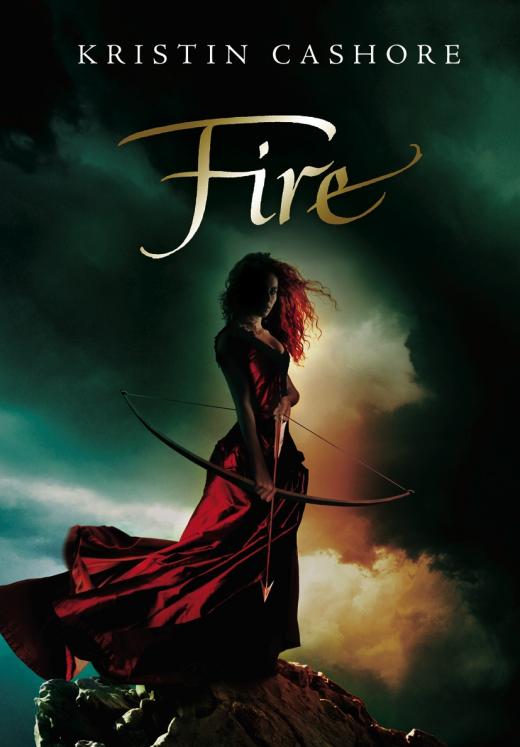 The right of Kristin Cashore to be identified as the author of this work has been asserted by her in accordance with the Copyright, Designs and Patents Act 1988.

Printed and bound in the UK by CPI Mackays, Chatham, Kent

The Orion Publishing Group’s policy is to use papers that are natural, renewable and recyclable products and made from wood grown in sustainable forests. The logging and manufacturing processes are expected to conform to the environmental regulations of the country of origin.

For my little sister Catherine, the (Corinthian) pillar of my heart

L
ARCH OFTEN THOUGHT that if it had not been for his newborn son, he never would have survived his wife Mikra’s death. It was half that the infant boy needed a breathing, functioning father who got out of bed in the mornings and slogged through the day; and it was half the child himself. Such a good-natured baby, so calm. His gurgles and coos so musical, and his eyes deep brown like the eyes of his dead mother.

Larch was a game warden on the riverside estate of a minor lord in the south-eastern kingdom of Monsea. When Larch returned to his quarters after a day in the saddle, he took the baby from the arms of the nursemaid almost jealously. Dirty, stinking of sweat and horses, he cradled the boy against his chest, sat in his wife’s old rocker, and closed his eyes. Sometimes he cried, tears painting clean stripes down a grimy face, but always quietly, so that he would not miss the sounds the child made. The baby watched him. The baby’s eyes soothed him. The nursemaid said it was unusual for a baby so young to have such focused eyes. ‘It’s not something to be happy about,’ she warned, ‘a child with strange eyes.’

Larch couldn’t find it within himself to worry. The nursemaid worried enough for two. Every morning she examined the baby’s eyes, as was the unspoken custom of all new parents in the seven kingdoms, and every morning she breathed more easily once she’d confirmed that nothing had changed. For the infant who fell asleep with both eyes the same colour and woke with eyes of two different colours was a Graceling; and in Monsea, as in most of the kingdoms, Graceling babies immediately became the property of the king. Their families rarely saw them again.

When the first anniversary of the birth of Larch’s son had come and gone with no change to the boy’s brown eyes, the nursemaid still did not leave off her muttering. She’d heard tales of Graceling eyes that took more than a year to settle, and Graceling or not, the child was not normal. A year out of his mother’s womb and already Immiker could say his own name. He spoke in simple sentences at fifteen months; he left his babyish pronunciation behind at a year and a half. At the beginning of her time with Larch the nursemaid had hoped her care would gain her a husband and a strong, healthy son. Now she found the baby who conversed like a miniature adult while he drank at her breast, who made an eloquent announcement whenever his underwrappings needed to be changed, positively creepy. She resigned her post.

Larch was happy to see the sour woman go. He constructed a carrier so that the child could hang against his chest while he worked. He refused to ride on cold or rainy days; he refused to gallop his horse. He worked shorter hours and took breaks to feed Immiker, nap him, clean his messes. The baby chattered constantly, asked for the names of plants and animals, made up nonsense poems that Larch strained to hear, for the poems always made Larch laugh.

‘Birdies love treetops to whirl themselves through, for inside of their heads they are birds,’ the boy sang, absent-mindedly, patting his hand on his father’s arm. Then, a minute later: ‘Father?’

‘You love the things that I love you to do, for inside of your head are my words.’

Larch was utterly happy. He couldn’t remember why his wife’s death had saddened him so. He saw now that it was better this way, he and the boy alone in the world. He began to avoid the people of the estate, for their tiresome company bored him, and he didn’t see why they should deserve to share in the delight of his son’s company.

One morning when Immiker was three years old Larch opened his eyes to find his son lying awake beside him, staring at him. The boy’s right eye was grey. His left eye was red. Larch shot up, terrified and heartbroken. ‘They’ll take you,’ he said to his son. ‘They’ll take you away from me.’

Immiker blinked calmly. ‘They won’t, because you’ll come up with a plan to stop them.’

To withhold a Graceling from the king was royal theft, punishable by imprisonment and fines Larch could never pay, but still Larch was seized by a compulsion to do what the boy said. They would have to ride east, into the rocky border mountains where hardly anyone lived, and find a patch of stone or scrub that could serve as a hiding place. As a game warden, Larch could track, hunt, build fires, and make a home for Immiker that no one would find.

IMMIKER WAS REMARKABLY calm about their flight. He knew what a Graceling was. Larch supposed the nursemaid had told him; or perhaps Larch himself had explained it and then forgotten he’d done so. Larch was growing forgetful. He sensed parts of his memory closing up on him, like dark rooms behind doors he could no longer open. Larch attributed it to his age, for neither he nor his wife had been young when she’d died birthing their son.

‘I’ve wondered sometimes if your Grace has anything to do with speaking,’ Larch said as they rode the hills east, leaving the river and their old home behind.

‘Of course it doesn’t,’ Larch said, unable to fathom why he’d ever thought it did. ‘That’s all right, son, you’re young yet. We’ll watch out for it. We’ll hope it’s something useful.’

Immiker didn’t respond. Larch checked the straps that held the boy before him in the saddle. He bent down to kiss the top of Immiker’s golden head, and urged the horse onward.

A GRACE WAS a particular skill far surpassing the capability of a normal human being. A Grace could take any form. Most of the kings had at least one Graceling in his kitchens, a superhumanly capable bread baker or winemaker. The luckiest kings had soldiers in their armies Graced with sword fighting. A Graceling might have impossibly good hearing, run as fast as a mountain lion, calculate large sums mentally, even sense if food was poisoned. There were useless Graces, too, like the ability to twist all the way around at the waist or eat rocks without sickening. And there were eerie Graces. Some Gracelings saw future events before they happened. Some could enter the minds of others and see things it was not their business to see. The Nanderan king was said to own a Graceling who could tell if a person had ever committed a crime, just by looking into his face.

The Gracelings were tools of the kings, and no more. They were not thought to be natural, and people who could avoid them did, in Monsea and in most of the other six kingdoms as well. No one wished the company of a Graceling.

Larch had once shared this attitude. Now he saw that it was cruel, unjust, and ignorant, for his son was a normal little boy who happened to be superior in many ways, not just in the way of his Grace, whatever it might turn out to be. It was all the more reason for Larch to remove his son from society. He would not send Immiker to the king’s court, to be shunned and teased, and put to whatever use pleased the king.

THEY WERE NOT long in the mountains before Larch accepted, bitterly, that it was an impossible hiding place. It wasn’t the cold that was the problem, though autumn here was as raw as midwinter had been on the lord’s estate. It wasn’t the terrain either, though the scrub was hard and sharp, and they slept on rock every night, and there was no place even to imagine growing vegetables or grain. It was the predators. Not a week went by that Larch didn’t have to defend against some attack. Mountain lions, bears, wolves. The enormous birds, the raptors, with a wingspan twice the height of a man. Some of the creatures were territorial, all of them were vicious, and as winter closed in bleakly around Larch and Immiker, all of them were starving. Their horse was lost one day to a pair of mountain lions.

The Journey Home: A Novel by Olaf Olafsson
The Wronged Princess - Book I by Kae Elle Wheeler
La biblia bastarda by Fernando Tascón, Mario Tascón
Someone Wishes to Speak to You by Jeremy Mallinson
KIDNAPPED, A Romantic Suspense Novel by Ferrell, Suzanne
The Alien Orb by V Bertolaccini
Something About Love: A YA contemporary romance in verse by Johnson, Elana
The Diary of a RAF Lancaster Bomber Pilot by Les Joy
Cold Cases Solved: True Stories of Murders That Took Years or Decades to Solve (Murder, Scandals and Mayhem Book 8) by Mike Riley
Deadly Descendant by Jenna Black
Our partner