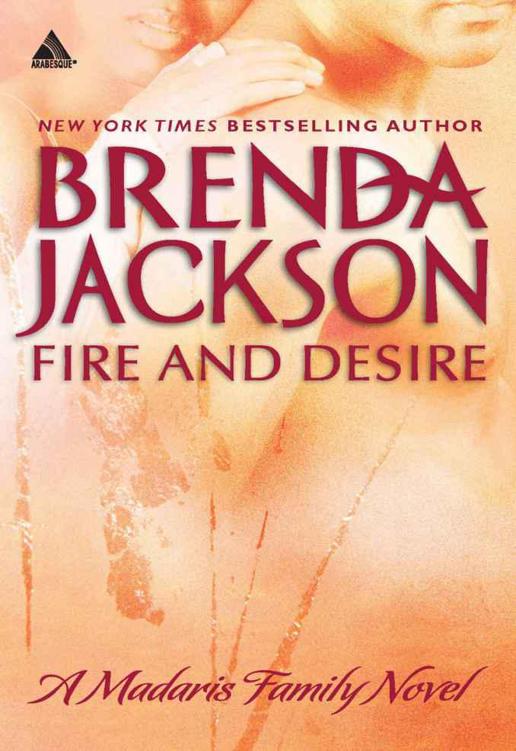 This book is dedicated to the memory of my baby sister,

Thanks for all those special moments
that I will cherish forever.

To my husband, Gerald Jackson, Sr.
You are my hero.

To my family and friends. Thanks for all the special things that you do.

To Brenda Arnette Simmons. Thanks. Once again your helpful feedback on the finished product kept me on track.

Thanks to my coworkers, who made my extended business trips to Minnesota and Illinois such enjoyable ones. And yes…they are finally out of the jungle.

To Raymond and Marsher Boyd, parents of the real Trevor Maurice. Thanks for being special people.

To Fabio Fasanelli. Thanks for sharing information with me about your homeland of Brazil.

And most importantly, thanks to my Heavenly Father, who gave me the gift of writing.

THE MADARIS FAMILY AND FRIENDS SERIES

I love writing family sagas, and I am so happy that Harlequin is reissuing my very first family series, the Madaris family. It’s been twelve years and fifty books since I first introduced the Madaris clan, and in that time this special family—along with their friends—have won their way into readers’ hearts. I am ecstatic to be able to share these award-winning stories with everyone all over again—especially those who have never met this family—up close and personal—in this special-edition collectors’ series.

I never dreamed when I penned my first novel,
Tonight and Forever,
and introduced the Madaris family, that I was taking readers on a journey where heartfelt romance, sizzling passion and true love awaited them at every turn. I had no idea that the Madarises and their friends would become characters that readers would come to know and care so much about. I invite you to relax, unwind and see what all the hoopla is about. Let Justin, Dex, Clayton, Uncle Jake and their many friends transport you with love stories that are so passionate and sizzling they will take your breath away. There is nothing better than falling in love with these Madaris men and their many friends.

For a complete list of all the books in this series, as well as the dates they will be available in a bookstore near you, please visit my Web site at www.brendajackson.net.

I also invite you to drop me an e-mail at [email protected] I love hearing from my readers. 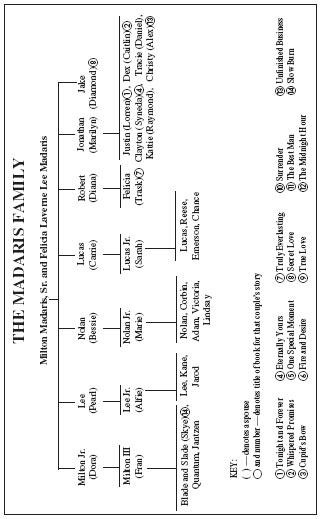 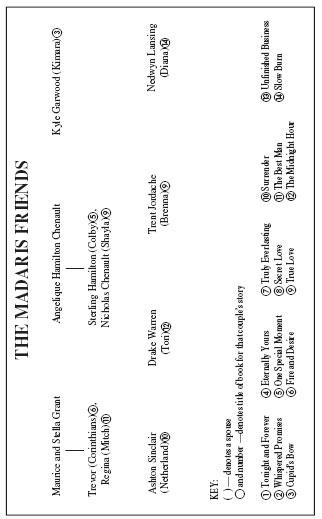 Above all else, guard your affections. For they influence everything in your life.

The sound of the unfamiliar voice made Corinthians Avery turn around quickly. Her eyes locked first on the stranger’s dark, handsome face, then drifted down to his bare, wet chest, before moving downward to the white towel covering his middle…barely. Her gaze flew back up to his.

Her throat suddenly became dry, but somehow she was able to conjure up a voice. She cleared her throat. “You’re not Dex.” She quickly snatched her robe off the chair, shielding herself from him.

The man merely stared at her without comment. The only sign he gave that he’d heard her was the sudden lift of his brow. When seconds ticked by he finally spoke. “I know who I am, but who the hell are you?”

The man’s rudeness, as far as Corinthians was concerned, was totally uncalled for. And it didn’t help matters that he’d seen her outfit. How embarrassing! Could she have made a mistake and entered the wrong room? No, that could not be possible. Dex was to arrive for a two-day business meeting with her employer. She had made the reservations with the hotel herself, making sure they were given connecting rooms. So who was this man?

“I’m a friend of Dex’s. Where is he?” she asked, suddenly feeling light-headed.

Trevor Grant’s gaze took in the woman standing before him who’d been dressed in what he thought was the sexiest getup he’d ever seen on a woman. Too bad she had put her robe on. She had to be the most gorgeous woman he’d ever laid eyes on. He couldn’t help wondering who she was. Was this some sort of joke Clayton Madaris was playing on his brother Dex? It wouldn’t have been the first time Clayton had gone a little overboard by sending one of his numerous female friends to liven up what he considered as Dex’s dull and boring life.

“Did Clayton put you up to this?” he asked the woman.

“I asked if Dex’s brother Clayton put you up to this. If he did, you’re out of luck. He forgot to cancel you out.”

“What are you talking about?” Corinthians straightened her shoulders and met the stranger’s gaze head-on. She tried putting out of her mind just how handsome he looked.

The man continued to stare at her, seemingly totally nonchalant with
his
state of half-nakedness, but definitely not with hers. His gaze moved over her from head to toe, occasionally lingering in certain places. He acted as if he had X-ray vision and could actually see through her robe.

“Dex’s home with his wife,” he said bluntly.

His statement came as such a shock that Corinthians had to lean against the bedpost. “You’re lying. Dex isn’t married.”

Trevor frowned. Not too many people called him a liar and got away with it. “Look. I don’t know who you are or what you’re doing in my room, but you’re going to tell me, or you’ll have a lot of explaining to do to Security. You have no right to be in my room.”

Corinthians could feel her head spinning. This couldn’t be happening to her. Everything was going wrong, and this man claimed Dex was married.

“I know Dex got married a few years ago. But he got a divorce a short while later. Are you saying he got married again?” she asked him dazedly.

Trevor saw the bleakness in her face. It was obvious that whomever she was, she wasn’t taking the news of Dex’s marriage very well. He began having doubts she was someone Clayton had sent, but was someone who knew Dex personally. He came to stand before her.

“Dex and his wife were separated, but they never got a divorce. Now they’re back together. All three of them,” he said.

“All three of them?” she asked softly.

“Yes, all three of them. Dex, his wife and daughter.”

The next thing Trevor knew, the woman had fallen in a dead faint at his feet.