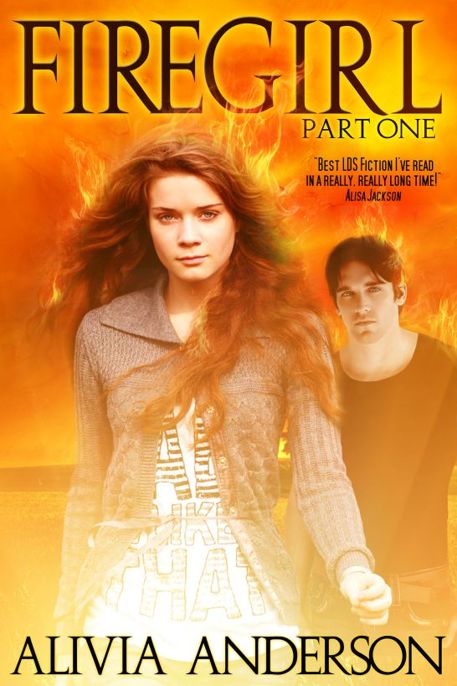 "This book blew it out of the water! An amazing
coming of age story that will change you--must read!" Jennifer
Youngblood.

"Perfectly combined romance and inspiration--with a
touch of mystery! Could NOT put it down!" Sandra Poole

Jennifer and Sandra are the co-authors of
many bestsellers, including
Stoney Creek Alabama
and
The
Paper Rose Club
.

"
Fire Girl is equal parts
humor and heart. Maddie had me laughing one minute and crying the
next. This story really resonated with me, and is one I'll return
to over and over again for years to come.
" Lindzee
Armstrong—twinmamma.com

"A cross between Nicholas Spark's
The Last
Song
and Jack Weyland's
Charly
. Loved it!" Page Hopkins,
Author of
Cooking Your Sass off—Holiday Style

"Fire Girl brings to life faith and hope that lifts
the reader up and inspires them to see life in a whole new light.
Highly recommended!" Rachel Hert, Fantasyediting.com

No part of this publication may be
reproduced, distributed, or transmitted in any form or by any
means, or stored in a database or retrieval system, without the
prior permission of the publisher. The only exception is brief
quotations in printed reviews. The reproduction or utilization of
this work in whole or in part in any form by any electronic,
mechanical or other means, known or hereafter invented, including
xerography, photocopying and recording, or in any information
storage or retrieval system, is forbidden without the written
consent of the publisher.

Thank you for respecting the hard work of the
author Taryn A. Taylor.

This book was professionally edited by Rachel
Hert.

This is a work of fiction. Names, characters, places
and incidents are either the creation of the author’s imagination
or are used fictitiously, and any resemblance to actual persons,
living or dead, business establishments, events or locales is
entirely coincidental.

To my four
awesome boys—Daniel, Grant, Jacob, Benjamin. This is the legacy I
leave you—Families are Forever.

And to my husband—you are the one I want to share
everything with.

You better not tell anyone.

The pit of my stomach erupted into something
bitter and acidic. I stared at the text. What happened to radio
silent? That’s what we’d agreed on.

I ripped out my ear buds and looked around.
Small town quaintness taunted me like an angry older sibling. I
squeezed my cell phone and searched the Main street shops, seeing
everything and nothing. Seriously—she thought she had to remind me
not to tell anyone?

“Are ya awake?” Grandpa asked without turning
around.

I texted Carrie back.
I
won’t.

I stared at the red stoplight and focused on
ignoring him. Stupid text. Stupid Carrie. Stupid town. My eyes
connected with Grandpa’s in the rearview mirror.

He lifted an accusing eyebrow.

“Is this light on permanent stuck or
something?”

Grandpa let out a soft chuckle. “You got some
place to be, Madds?”

I gave him my patented eye roll.
“
Yeah
, haven’t you heard? My Sugar Valley fan club has
called a meeting? I’m
late
.”

Grandma swung her overly died red hair
between the seats, her buffer smile ready. The one she’d been using
since they’d picked me up at the court house. “You’re gonna love it
here, Sweetie. You’re home now.”

The word sounded wrong, the out of tune piano
key that messes up the whole recital. I tried to give Grandma a
half-smile but my cheeks wouldn’t comply.

Grandma lifted her hand and waved across
Grandpa. “Oh look, that Lockhart boy—he’s gotten so handsome.”

Grandpa waved, too. “He’s had to grow up
fast.”

My heart sped up.

He flicked his dark hair away and anger
flashed into his eyes. A dagger tooth swung around his neck and
beckoned to strike.

An electric burst scraped inside the back of
my throat. “Just go!” The words came out loud and hostile.

“Hold your horses!” Grandpa responded back in
kind. “My word—you’d think someone’s
died
.”

I glared up at the unchanging red light and
tried to breathe. Who was he? “There’s no one around, do we
seriously
have to wait at this stoplight? It doesn’t
matter?”

“Everything we do
matters
.” Grandpa
snapped back at me in a low growly growl. “That’s what’s wrong with
kids these days. They think they can just run a red light and it
doesn’t
matter
. It’s called breaking the law.”

I peeked back out the window.

He still stood there. Close. Too close. And
even angrier.

“Maddie?” Grandma’s worried voice. “Are you
all right.”

Grandma glanced back at me for a second and
then sighed when I didn’t look at her. She turned forward.

I didn’t want to look again, but I couldn’t
stop myself.

Our eyes connected. His grin widened. He
slowly pointed at me and started to cross the street. A silent
challenge. A silent battle. A silent what?

I slammed myself back into the seat. Did I
know him? I thought of all the summers past. Did he know
me?

He
hated
me. I knew that.

Grandpa thumped his fingers hard against the
steering wheel to a rhythm I didn’t recognize and, after this trip,
would never be able to get out of my head.

I tried to calm myself down. Who was he? Even
his conjured image made the back of my spine spike with unrest.
Focus—this town. Focus—getting out. Focus—I silently begged the
universe that Carrie would deliver on the money.

“Have ya kept up on the football team?”

Would the small, blue razor in my shower bag
be capable of slitting the large artery under my throat or would I
need something bigger? Football talk had never been my speed. When
my father and Grandpa and Uncle Bill talked sports, the words
turned fuzzy inside my brain like the teacher talking on Charlie
Brown.

He didn’t wait for my response. “I’d say this
year’s team is better than your Daddy’s. Yep. It’s because of
Chance. I’ll tell ya, Madds, he’s sure doing the Haven name proud.”
Grandpa
tsked
in that reprimanding way that compared me to
my cousin without actually making the comparison.

I couldn’t resist. “I’ve heard that maybe,
maybe four million times. But go ahead and tell me again about the
football team. Maybe you could finish it off by reminding me about
my dad—small town hero, went off to play on a football scholarship
and married the wicked city girl and never came back.”

My Grandma’s head flicked back, a troubled
wince, but the pain never reached her eyes. “Maddie—” She let out
another sigh, a sigh that said she would give up her buffer
smile.

Grandpa grunted. “You’ve changed the last
year and it hasn’t been for the better.”

“Frank, no.” Grandma put a hand over
Grandpa’s forearm. “Don’t.”

I tried to block Grandpa out and looked back
down at my phone.

Jimmy has a friend who will loan us the
money.

In the middle of my reply, Aunt Sylvie’s
number popped up. I ignored it and finished my text.
Soon!

I erased Aunt Sylvie’s voicemail without even
listening to it. She would feel guilty. And she should. If she
would have been home more none of it would have happened—at least
that’s what the judge had speculated. He was wrong, but still. I
accidentally looked at Grandpa’s face in the rearview mirror.

His lips puckered around his mouth in that
way of his. The way that told me he was jonesing to give me a
lecture.

“I loved your Mama.” Grandpa’s voice came out
rough and reverent.

His tone caught me off guard. I didn’t
respond and tried to ignore the way my chest clamped down like a
truckload of bricks had been dumped.

“Sometimes you think you know the truth about
something,
but you’re wrong
.” He cleared his throat. “And
you should know better than to think that your Mama didn’t mean the
world to us. She and your Daddy meant
everything
to us.”

He didn’t know I’d heard him at the funeral.
Every. Single. Word.

The gray eyes from the stoplight flashed back
into my mind. I discarded Grandpa’s words and thought about
shark-tooth guy. He knew something.

Grandpa let out a long breath. “I’m glad
you’re here, Madds. We can use the help.”

“I don’t do farm work.” It came out before I
could stop it. But, there would
not
be any preconceived
notions about
that
.

Grandpa pointed into the rearview mirror.
“Families help each other out, that’s just what they do.”

I met his challenge. “Really, that’s what
they do?” I paused and my throat involuntarily tightened.

Grandma turned back. “Maddie, sweetie, are
you angry at us?”

Steel tongs squeezed my lungs like some bad
science experiment performed on a wide-eyed dehydrated-looking
frog. I tried to breathe lightly. Air in, blow out through the
nose. The therapist said people had found this technique the most
useful during duress.

Grandpa let out a sigh. “Leave her be, Star.
She thinks she knows everything.”

Grandma reached out like she would touch me,
but then turned back to the front.

Another breath. Into the nose, down into the
lungs, sit up straight and slowly out.

Grandpa circled to the back of their faded,
red brick house and stopped beneath the white painted gasoline
barrel. He turned off the engine. “I’ll fill ‘er up and then go
check on Chance.”

Grandma flung her door open, gathered her red
purse, and stepped out. I knew she would have a million things to
do. She always had her lists and rewarded herself with the check
marks. “Tell the guys I’ll have enough in the crockpot for all of
us.”

“Will do.” Grandpa let out a loud groan as he
stood. “Sitting never suits old men.”

I opened the door and the smell of diesel
fumes filled me. All the anxiety shifted from my chest down into my
stomach. I surveyed the premises and noted that everything looked
exactly as it had the last time I’d been here—the brown shed that
housed all of Grandpa’s tools and old saddles, my grandma’s clothes
line that I’d followed her back and forth to a million times to
hang laundry, her large garden that lined the edge of the chipped
white fence and sprouted some very large pumpkins.

The people. The people that littered the yard
that day. The people I didn’t know, but knew me. The casserole
dishes and the sad looks in their eyes. The people I couldn’t think
about.

Her perfume. My mother’s perfume.

I reached back to steady myself on the car
door. My hand scraped against the metal rim. Pain and blood. Wet,
sticky blood.

Raid on the Sun by Rodger W. Claire
Need Us by Amanda Heath
1949 - You're Lonely When You Dead by James Hadley Chase
Captive Witness by Carolyn G. Keene
Hollywood is an All Volunteer Army by Steven Paul Leiva
Life Without Limits by Nick Vujicic
The Bright Silver Star by David Handler
Plum Girl (Romance) by Winters, Jill
Buck by M.K. Asante
Operation Norfolk by Randy Wayne White
Our partner