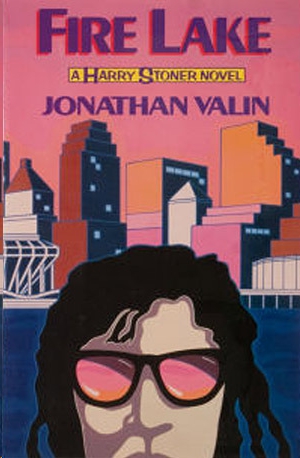 To Katherine as always, and to Jim

I got the phone call around one-thirty on a rainy
December morning, half an hour after I'd gone to bed. The man on the
line sounded edgy and tired, as if he, too, had been awakened by a
late-night call. I laid the phone on the pillow beside my ear,
glanced at the clock, and shook a cigarette from a pack lying on the
nightstand. The man's voice, thin, reedy, and countrified, wasn't
familiar; so if it was trouble, and it certainly seemed to be, given
the hour, I figured it was the impersonal kind, the professional
kind. I couldn't have been more wrong.

"Is this Harry Stoner's house?" the man
asked doubtfully, as if he was afraid he'd dialed the wrong number.

There was a pause, and when the man spoke again he
sounded confused. "You're Stoner's father?"

"Hold on, now," the man on the phone said
warily, "are you saying you're Harry Stoner?"

I plucked the receiver off the pillow and stared at
it. "Maybe you better tell me who you are," I said,
lighting the cigarette.

"My name is Jenkins. Claude Jenkins. I'm the
night manager at the Encantada Motel, out here on Wooster Pike. We
got us . . . some trouble, Mr. Stoner."

"What kind of trouble?" I said.

Jenkins put his hand over the phone, and I heard
someone else firing questions at him in an excited voice. Jenkins
came back on the line and asked, "You're not a junior, are you,
Mr. Stoner? I mean there ain't no other Harry Stoners in your family,
are there?"

"For chrissake!" I said, losing my temper.
"I'm Harry Stoner. Got it?"

Fully awake now and irritated because of it, I kicked
the blankets off my legs and straightened up against the headboard.
"Look, Jenkins, why don't you tell me what the problem is, then
maybe we can decide if I'm the right party."

"Guess I better," Claude said, after
thinking it over for another second. "You see we got this guest
at the motel tonight, and . . . well, he must have some trouble or
other 'cause he damn near killed himself. Took a whole shitload of
pills. Puked all over his room and wandered out into the lot. Gladys,
our girl, just happened to find him, lying beside his door with the
pill bottle in his hand. We've been pouring coffee into him here in
the office, but he's still pretty doped up."

I waited for an explanation, and when it didn't come
I said, "That's damn interesting, Claude, but why call me?"

"He registered under the name of Harry Stoner,"
Jenkins said.

"Who did?" I asked-not getting it.

"The guy who tried to kill himself."

I felt a shudder run up my spine, as if I'd seen my
own obit in the newspaper. "You're kidding," I said,
aghast.

"I hear you, mister," Claude said
sympathetically. "But that's the long and short of it. He
registered under your name and gave your phone number, too. That's
why I called. That's why I had to be sure."

I understood his confusion.

There was just enough hope in Claude's voice to make
me smile. Only it wasn't particularly funny. The suicide could have
picked Harry Stoner out of the phone book, I told myself. But deep
down I knew that when the message in the bottle has your name on it,
it isn't by chance.

"You figure he's a friend of yours, maybe?"
Jenkins said, dropping it squarely in my lap. "I mean him using
your name and all."

I glanced at the clock and sighed. "I don't
know. It's possible." A friend or an enemy. "What's he look
like?"

Great, I said to myself. "What's his condition
now?"

"He ain't fully conscious yet, if that's what
you mean," Jenkins said.. "He keeps slipping in and out.
Babbling a lot. Puking and moaning. I don't think he's going to
croak, but he's a far cry from walking out of here under his own
power."

"If he's really in bad shape, you better call an
ambulance," I said.

"Ambulances cost money," Jenkins said
uneasily. "And it ain't just the money. You call an ambulance in
a situation like this one and you're all over cops. We run a little
bar and restaurant alongside the motel, and this boy here did a good
deal of drinking at the bar before he decided to end it all. We just
don't want to call the cops if we don't have to. It's for his good,
too," Jenkins added.

But I could tell he was thinking about his liquor
license, and maybe the poker table in the back room or the video game
that paid off in cash. It looked like Claude Jenkins was intent on
making his suicidal guest my business. And for all I knew, his
instinct was right. It would bother the hell out of me if I didn't
find out who the scruffy son of a bitch was.

"All right, Claude," I said. "You keep
pouring coffee into Mr. Stoner. I'll be out there in about an hour.
If I know him, I'll take him off your hands. And if I don't, we'll
call the cops.

"Deal. Thanks a hell of a lot, Mr. Stoner,"
Jenkins said gratefully. "Honest to Christ, I got no idea what
to do with him--whoever the hell he is."

It was almost three-thirty when I pulled into the
Encantada Motel parking lot. Drowsiness and the cold December rain
had slowed me down getting started. And then it had been a pretty
good jaunt out Columbia Parkway, through Mariemont to that tag-end
stretch of Wooster Pike known as Miamiville. I sat in the car for a
moment, with the motor running and the wipers clearing the sleet from
the windshield, and stared at the little flock of white-faced stucco
cottages huddling beneath the ice-shagged red-and-yellow neon motel
sign. There wasn't a single light on in any of the cottages; in fact,
several of them were tacked over with plyboards, as if they'd been
condemned. To the west of the cottages, a slightly larger shack, with
an Office sign on the door, glowed dimly in the darkness--a frail
yellow light that leaked through the blinded front window and puddled
up on the rain-soaked asphalt of the lot. The bar that Jenkins had
mentioned was behind the office and to its right--a dark Quonset hut
with a Miller sign flashing in one tiny window. A beat-up Jeep
Cherokee with icy wheel wells was parked in front of the hut. Aside
from my Pinto, it was the only car in the motel lot.

I gazed through the rain at the office window and
knew that I didn't really want to go inside. I wanted to go
home--back to sleep. But curiosity and an obscure, ludicrous sense of
obligation kept me sitting there, albeit with the motor running. Be
real, I told myself'. This is a dead-end place, and whomever you find
inside that office, whoever borrowed your name for an epitaph, is
going to be a dead-end case. Nobody you want to know, much less look
after. The truth was, I didn't have any friends who'd end up in the
Encantada Motel. I didn't have that many friends, period.

I cracked the car window open and let a little icy
rain spatter my face. As I sat there trying to make up my mind about
whether to go in or not, the office door opened. A sharp-faced man
with paper-white skin and a shock of red hair stuck his head out and
hollered at me. I couldn't hear him over the wind, but I could see
him plainly enough. And he could see me. He waved his arm in an
unmistakable gesture of welcome.

God damn it! I said to myself. I should have thrown
the car in reverse and sped out of the lot. Instead, I turned off the
engine, bundled my pea coat at the collar, and stepped into the rain.

The man waited for me in the doorway, a smile of
relief on his face.

I grunted at him. "You Jenkins?"

He nodded. "I'm Claude Jenkins. Come on in out
of the rain."

I walked into the office--a square, paneled room,
furnished with a couple of egg-shaped orange plastic chairs and lit
by two lava lamps bolted to pine end tables. An L-shaped counter with
an empty plastic brochure-holder sitting on it divided the office in
two. There was a beaten wooden desk behind the counter and a door
marked Private behind the desk. Jenkins ushered me over to the orange
chairs.

"Nasty night," he said, sitting down.

I shook some ice from my sleeve and sat down next to
him. Up close Jenkins looked like his motel--stale, seedy, and
corrupt. If he'd been blond, he would have been an albino: his skin
was that white and his eyes were that pallid blue. But the red hair
and eyebrows just made him look wan and poverty-stricken--the kind of
guy who spends his life hiding from the sun in the darkness of a
one-room apartment in Riverview or a motel office in Miamiville. He
had a thin, surly, chewed-over mouth--trained, like a spit curl, to
hold a constant, insincere smile. He wore a wrinkled white dress
shirt with a pack of Luckies in the breast pocket.

"Guess you'll be wanting to see your friend,"
he said anxiously. "He's in the back office there, sleeping it
off." He started to get up to show me to the door marked
Private. But I put a hand on his sleeve to stop him. He sat back down
slowly, brushing his sleeve where I'd touched it, as if I'd left a
mark.

"Already told you," he said. "Your pal
got drunk, took some pills, and tried to kill himself."

"Did he talk to anybody while he was in the
bar?" I asked. "Meet with anybody?"

"Clem does," Jenkins said. His mouth was
beginning to droop into a scowl, as if someone had taken a steamer to
that spit-curl grin. "Look, why all the questions? Clem's gone
home. So has Gladys, our girl. I'm the only one left here. And I'm
just trying to do the right thing. Now why don't you take care of
your friend and let me get back to doing my job."

"Why? What would they find?"

"Nothing," Jenkins said, trying to look
innocent and not doing a good job of it.

He was obviously lying, but I was too tired to push
it. For all I knew, the guy in the back room was a stranger, and
whatever he'd been up to at the Encantada Motel was none of my
business.

"All right, Claude," I said, getting to my
feet.

I followed Jenkins across the office to the door
marked Private. He put his hand on the knob then glanced back at me,
with a warning look. "He's not in the best of shape. Got some
knicks and bruises. From bumping around in the parking lot, I guess."