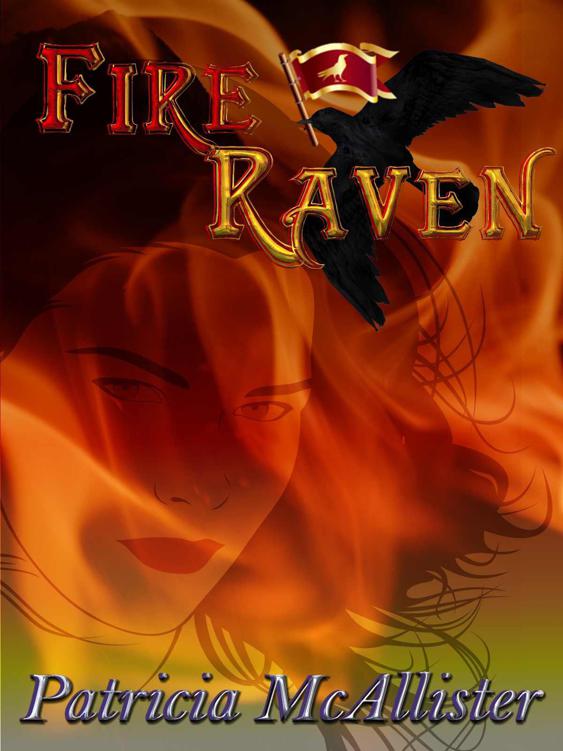 The Irish Sea, off the coast of Wales

The first mate’s cry spun Kat around on the balls of her feet. She was just in time to deflect the savage downswing of the Spaniard. Sparks flew when their blades met and clashed.

She staggered back against the mainmast, every muscle in her sword arm screaming for reprieve. She saw the mad gleam in the Spaniard’s dark eyes and knew he meant to kill her. England’s old enemy was now her own.

Her mind grappled to understand the motive behind the attack as she struck a defensive posture in preparation for the next blow of her assailant’s sword.
Fiach Teine
was a merchant ship. She was peacefully crossing the Irish Sea. Transporting goods for the Eastland Company was her trade — not war. This unprovoked, savage attack made no sense.

When Kat first heard the lookout — Corby, reporting another ship coming astern upon them — she’d paid him no heed. Not until he added the fact that the ship flew Spain’s colors.

Even then, she had not been unduly concerned. Perhaps the other ship was in trouble. It appeared to be listing to one side. As the galleon drifted closer, Kat saw she was right. The Spanish crew waved to them and signaled that they needed help. Kat ordered her own men to ready the grappling hooks and boarding planks.

Normally she was not a trusting sort, but she had been raised somewhat unconventionally at sea by her parents, and her father, in particular, had always stressed the need for rules governing civility and formalities, even on the high seas. Besides, the Armada was long past. King Philip was on his deathbed. There was no reason for Spain to attack a lone merchant vessel.

How wrong she had been! Kat’s temper burned with the memory of her folly. The Spaniards turned on her crew the moment the ships were linked together. The bloody pirates came streaming across the boarding planks, swinging over on the ratlines, like the dirty rats they were. Half Kat’s crew had been murdered before her eyes, and only Rory, bless him, had managed to buy her a moment of reprieve — time enough to dash to the captain’s cabin and retrieve a weapon.

Sweet Jesu! Rory!
She dared not glance at his inert figure, lying silent and too still on the deck near the mainmast. If she did, Kat knew she would lose her concentration, and hence her life.

Damme
, she was weakening. The Spaniard hacking so gracelessly away at her seemed enraged that he could not best a mere female. His blows became wilder, undisciplined. Inch by inch, Kat felt herself losing ground on the slippery deck. Soon she was trapped, pinned against the mainmast, her disciplined slash-and-parry style was ineffective against the Spaniard’s reckless assault.

Skkkreee
… their swords met again, grappled, then slid apart again with a too-human shriek and the mournful echo of steel. For a moment, the two combatants paused, panting, staring at each other with a mixture of hate and grudging respect.

Kat was the first to break eye contact. Rory’s body came into her sweeping line of vision instead. Did he stir, or had she only imagined it?
Oh, Sweet Jesu, please!
she prayed, and to her astonishment, the red-haired man moaned slightly. She faltered. Only for a second. It was enough. Her sword flew from her hand with a metallic clatter and skidded across the deck.

Just before her triumphant attacker lunged, a male voice rang out from the melee.

Kat’s head snapped around to find the source of the order. Wind whipped her dark hair back from her face, and she stared in shock as a man jauntily stepped over dead bodies on the deck, headed in her direction. He was dressed like a court dandy, in a black doublet and fine Venetian hose. His velvet breeches were lined with gold braid and silk panes. It seemed incongruous: he was so elegantly attired while his crew wore little more than rags. Even more mystifying was the fact that he spoke fluent French instead of Spanish.

He stopped before Kat, elbowing her former adversary, the Spaniard, out of his way. A low chuckle rose to the Frenchman’s lips as he gazed at Kat defiantly facing her death.

“
Bonjour, Mademoiselle
Katherine. May I compliment you on your fine swordplay? You almost make me regret my duty.”

Kat felt a nameless terror rising to clutch her by the throat. The other pirates were mere rabble, but there was something truly frightening about this man’s emotionless black eyes, his small moustache so carefully groomed and waxed, his precise and dignified speech.

She swallowed hard and finally found her voice. “How do you know my name?”

He smiled. It was a perfunctory smile. It stretched his lips into a thin, bloodless line, yet never quite reached his glittering black eyes. He waved his hand in a dismissing fashion.

“’Tis of no importance now. What matters is I have found you, and at last I shall have my revenge.”

Revenge? Kat had never seen the man before. She opened her mouth to tell him so, as he reached down to pluck up a rapier from one of her dead crew.

“I will not be denied the satisfaction of killing you myself,” he said pleasantly, as he straightened and hefted the weapon in well-manicured hands. “
Je regrette
; you are more intriguing a woman than I ever imagined.”

Kat flicked a desperate glance at her own lost sword, lying some feet away. There was no way she might reach it before he moved. She braced her hands against the mainmast, her nails scoring the wood. The wind sent the rope ladder swinging in the breeze, and she felt it brush against her sweaty hands.

The crow’s nest! It was her only chance. Kat prided herself on being able to climb quickly and nimbly. She had no fear of heights. Somehow she had to bolt up the main-mast and fend off her attacker long enough to attract the attention of another passing ship.
God’s nightshirt!
she swore. A difficult feat, if not downright impossible. Kat had always been known for her reckless nature, though. Hadn’t the O’Neill always teased her she should have been born a man? Mayhap if she had, she could have saved them all ….

She forced the agonizing thought aside before it clutched her in its iron grip. She had no time to grieve now, and if she succeeded in eluding these murderers long enough for Rory to recover, perhaps all was not lost.

This reckless gamble appealed to Kat as well as any. While her mind made some quick calculations, perspiration broke out on her brow, and she desperately tried to outwit her unknown enemy.

“Forgive me,
Monsieur
, I cannot grasp your motives. Why would you want to harm me or my crew? I’ve never seen you before in my life.” She spoke perfect French, the better to surprise and disarm him. She hoped, in his fascination with her, he might not note the fact that Rory was rousing. She saw the redheaded man out of the corner of her eye; he appeared to be clutching the wound in his side. Coming round, slowly but surely.
Sweet Mother and Mary, Rory, hurry!

“If I must die by a stranger’s hand,
Monsieur
, I deserve to know why,” she added, stalling for more time.

The Frenchman seemed reluctant to answer her demand. “You might say this is a family matter,
Mademoiselle
. Or may I be so bold as to call you
Petite Chatte
, as does your crew?”

“My men are dead, thanks to you. You are no more than a coldblooded murderer.”

He ignored her fury. “Such a pity,” he said, reaching out to toy with a lock of dark hair blowing across Kat’s face. She snarled and jerked her head away. His laughter was thin and cold, like the sea wind biting through her canvas shirt. “You even hiss like an angry kitten. Are your claws as sharp?”

“D’you wish to find out?” Her challenge caught the Frenchman by surprise. She deliberately made her tone seductive, her steady gaze locked with his and smoldered with promise.

His momentary hesitation was enough. Kat reached for her right boot and snagged up her
scian
, an ornate Celtic dagger. The gift from her Irish grandfather had served as little more than a letter-opener until now. It molded to her tight fist like a lover, and she clutched it fiercely as she lunged for the Frenchman.

He raised his arms to block her bold attack, stumbling back with visible shock. He was not a physical sort, as Kat already surmised. She scored his sleeve, shredding the fine silk, and leaving a trail of bloody beads on his left forearm. To his credit, he recovered rapidly, lashing out with his own foil as she leapt deftly out of range.

Kat knew she had but moments to choose her course. She clamped the
scian
between her teeth and flung herself up on the rope ladder tied to the mainmast. She shimmied up the sagging steps, not daring to look down. She heard the Frenchman’s bellow of frustrated rage below her.

Safe for the moment in the crow’s nest, Kat peered down and saw him ordering one of his crewmen to pursue her. The other little fellow looked spry and agile as a monkey. He was halfway up the ladder before Kat’s trembling hands sawed her dagger’s blade through the final knot anchoring the ladder to the crow’s nest. With a scream, both man and ladder fell and hit the main deck below. The sickening thud made Kat shiver. She heard the Frenchman curse again.

A moment later he chuckled, a cunning sound. It raised the hair on the back of her neck. “’Twill do you no good,
Petite Chatte
!” he shouted up at her. There are other ways to … ah, how do the English say … skin a cat?”

Kat’s eyes widened as she watched him remove a small case from his doublet. Humming merrily, he opened the silver box and removed a flint stone. With calm, deliberate precision, he struck a spark and lit a cigar.

Mesmerized by his movements, Kat nervously licked her lips. Fire at sea meant death, as everyone knew well. She cried out when a bit of burning tobacco dropped to the wooden deck. He carelessly let it smolder there.

The Frenchman glanced up at her in faux surprise, once again speaking English. “You must forgive my clumsiness, Little Cat. I shall take care to dispose of this properly.” He moved to place the still-burning cigar atop a wooden casket. Kat’s hands whitened where she gripped the rail. The keg was full of whale oil!

He ignored her furious cries and pleas as he crossed the deck to the boarding planks still linking his ship to the
Fiach Teine
. Pausing only once, he turned to eye the smoking casket, then raised his malignant gaze to where she huddled atop the mainmast.

“
Au revoir
,” he called out, with a peculiar mixture of triumph and regret. The unmarked Spanish galleon drifted away on the evening tide, while the
Fiach Teine
began to burn.

Britt-Marie Was Here by Fredrik Backman
La horda amarilla by George H. White
A Good Old-Fashioned Future by Bruce Sterling
Vamps And The City by Sparks, Kerrelyn
The Hundred-Year-Old Man Who Climbed Out of the Window and Disappeared by Jonas Jonasson
#SOBLESSED: the Annoying Actor Friend's Guide to Werking in Show Business by Annoying Actor Friend @Actor_Friend
The Break-Up Psychic by Emily Hemmer
Forever Summer by Nigella Lawson
A Certain Latitude by Janet Mullany
Clutch (Custom Culture) by Oliver, Tess
Our partner