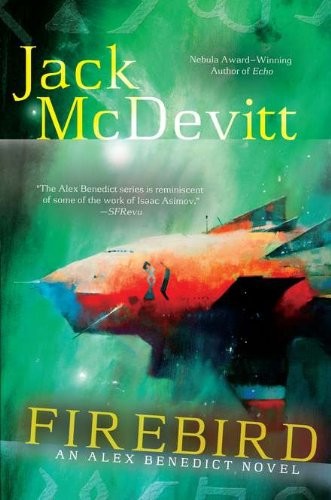 No part of this book may be reproduced, scanned, or distributed in any printed or electronic form without permission. Please do not participate in or encourage piracy of copyrighted materials in violation of the author's rights. Purchase only authorized editions. ACE and the “A” design are trademarks of Penguin Group (USA) Inc.

For Jack McNichol and Joe Chapman.

Thanks for a lifetime.

Thanks to Walter Cuirle, for advice and technical assistance. I'm also indebted to Ginjer Buchanan, my long-suffering editor. To Sara and Bob Schwager, for their contributions. To my agent and good friend for two decades, Ralph Vicinanza, whom we lost this year. And, as always, to my wife, Maureen, for persevering with the second, third, and fourth drafts.

Dates not classified as Common Era (
C.E.
) are based on the Rimway calendar.

Lt. Jeremy Dalton frowned at the screen. “Nothing yet, Steve?”

Steve Yaniwicz activated the expanded scan, pressed the earpods to signal that the AI was telling him something, checked the auxiliary display, and shook his head. “No, sir. No sign of her yet.”

Dalton was wearing his formal whites, in preparation for the upcoming change-of-command ceremony. “Okay,” he said. “They have to be close. Let me know.”

“Check with the rest of the squadron, Jerry?”

“Yes, sir. They are
not
in the area.” It had been almost two hours since the
Abonai'
s scheduled arrival time. The Dellacondan star drive, like the Armstrong system that had preceded it, wasn't too accurate. You might come out of it thirty or forty million kilometers from your intended destination. But they were providing extensive coverage. Somebody should have picked up the cruiser by now.

“All right,” Brolley said. He made no effort to hide his concern. “Let Fleet know.”

Admiral Thadeus O'Conner was aboard the incoming ship, scheduled to take command of the 314th Attack Squadron. Dalton had never seen O'Conner, didn't know anything about him, but he had to be an improvement over their current commander, Mary D'Angelo. The woman who never smiled. Who was impossible to work with. She thought nothing of chewing out subordinate commanders in front of anyone who happened to be present when she got annoyed. She insisted on telling everyone, in microscopic detail, how to do their jobs. And she had no respect for the chain of command. If she disapproved of the way a junior officer was handling an assignment, she didn't arrange to work through his boss; she went after the offender herself. It was clear she enjoyed raising hell, and there was no one in the squadron, and especially on the
Celestine,
who would regret her departure. As inevitably happened in such cases, she had been promoted.

He turned back to the comm operator. “Steve—”

“Get a message to Comm Ops at Point Edward. Tell them we're still waiting. Ask them to provide an updated ETA.” Point Edward was, effectively, just down the street. A forty-minute flight. In and out of hyperspace. It was hard to imagine what could be holding things up.

He watched Yaniwicz send the message. That, he suspected, would be the signal for the cruiser to arrive. But it didn't happen.

The transmission would require about twenty minutes to reach the Point. He looked out through the port at the Veiled Lady, which, to him, bore no resemblance whatever to a woman but appeared simply as what it was: a nebula filled with a million stars drifting through the night. Janet McReady, who did
indeed
look very female, thought he lacked imagination and pretended to feel sorry for him.

Janet would be assuming the watch in three hours. She was an intellectual type, beautiful but pretentious. Read philosophy and pretended to be able to see the child peering out of Barnable's impenetrable art. How, she'd say, could you miss it? Well, she looked good, and for a woman, that was enough.

He was still thinking about Janet when Yaniwicz raised a hand to signal he had something. It was too soon for Point Edward to have answered. Too soon for them even to have received his message. He started toward the comm desk, but Yaniwicz pointed at an auxiliary screen:

Movement Report
Abonai
not received as of 1720Z. Confirm
Abonai
your area.

Movement reports were routinely sent at departure and arrival. Dalton squinted at the message, then forwarded it to the CDO. Moments later, Mr. Brolley appeared in the comm center. He did not look happy.

“Still nothing?” he asked. The CDO was easygoing, a guy who never got excited. Dalton had been impressed with his behavior under fire. He was exactly the man you wanted to be with if you were having a serious problem.

“Very well. Tell everybody in the squadron to take another look. We want a report, positive or negative, from every ship.”

“While we're at it, let's inform Point Edward that we haven't seen them yet. Confirm whether they left on schedule.”

“We've already done that, sir. A few minutes ago.”

Brolley sighed and walked out. He'd be keeping Admiral D'Angelo informed, of course, which meant dealing with another of her annoying habits. When something went wrong, she had a tendency to sound as if it was the fault of the reporting officer. He had no doubt that Brolley was already feeling the heat.

Well, at least she hadn't come down to the comm center yet. Instead, she'd be descending on Operations, taking control of the scanners and sensors and giving obvious instructions. Dalton had seen her described in the Fleet newsletter as a can-do hands-on officer.

The request went out, and, within minutes, the destroyers began to check back in.
McMurtrie
first: Negative on the
Abonai.
Then
Karasani.
Then
Hopewell.

It was, of course, an exercise in futility. The three cruisers and six destroyers that comprised the Flag Squadron were already doing what they could, watching their screens and standing ready to report at first sighting. Had they seen anything, they'd have said something.

Eventually, Yaniwicz got a reply from Point Edward:
The
Abonai
ETA has not changed. They left on schedule.

More than two hours ago for a flight that should have taken twenty minutes.

“The drive's erratic, Mr. Dalton,” said Yaniwicz. “It could be on the other side of the sun.”

“I know, Steve. It wouldn't be the first time. But it's going to screw up the ceremony.”

“So do I. They've probably just missed their target. I hope.”

Yaniwicz grinned uneasily. “Safer going to Rigel,” he said, “than going to the grocery.” It was the standard platitude of the interstellar transport lines.

But then there'd been the
Capella.
Nine years earlier, on a flight from Rimway to Saraglia Station, it had made its TDI jump and never been seen again. Twenty-six hundred people had gone with it.

And there'd been the
Warburton,
lost eighteen months ago. Wreckage had been found, leading investigators to believe that its mass detectors had failed, and the ship had tried to materialize inside an asteroid. Of course, had that happened with the
Abonai
, there'd have been an explosion of considerable magnitude. No way they could have missed it.

They waited. Messages from Point Edward became increasingly frantic. Patrol craft and destroyers began to arrive to assist in the search.

Janet relieved the watch. Dalton returned to his quarters, showered and changed, went to the officers' mess for dinner, where, of course, the conversation focused exclusively on the lost ship. Tag MacAllen had a sister aboard the
Abonai,
and Boros Razkuli, a son. Everybody knew someone in the crew.

At midnight, when Dalton returned to his watch station, there was still no word.

Six days later, the
Abonai
was formally declared lost. An extensive search by a sizable portion of the fleet had revealed nothing.

A memorial service was held at Point Edward, and another at Toxicon, the
Abonai'
s home port. To the dismay of the
Celestine's
crew, Admiral D'Angelo was extended. Investigations continued for a year and a half. All reached the same nonresult: The
Abonai
, its crew, and Admiral O'Conner were missing due to cause or causes unknown.

However useless your product, package it properly, and people will buy it. People will buy anything if the approach is correct. It is this happy truth that keeps the wheels of commerce rolling.

I was sitting in my office at the country house, watching the snow come down, when Karen Howard arrived. The storm had reached epic proportions, at least by local standards, and I'd expected her to postpone. But she appeared at the front door exactly on time.

The only things I remember about her were that she wore a big hat, and that she talked in a loud voice. And, yes, that she was short. When she'd called for an appointment, she'd dodged explaining why she wanted to see us.
“I have something to sell,”
she had said.
“I know you'll be able to get a good price for me. It's all quite valuable.”

But no details. That kind of approach is usually a guarantee that the prospective client is trying to get away with something. The antiquities business attracts a lot of con artists. Particularly our specialty, which is handling objects that have specific historical significance. The original notebook, say, that Despar Kolladner had used when he was writing
Talking with God,
or a set of drums that had belonged to Pepper Aspin. People are usually quite good at creating and producing supporting documents, but Alex is hard to fool. It's only happened once, and it cost us. But that's a tale for another time.

Karen came into my office, shook off the snow, and removed the hat but held it close to her blouse as if it would one day be a collector's item. “I'm Elizabeth Robin's sister,” she said, in a tone suggesting that explained everything.