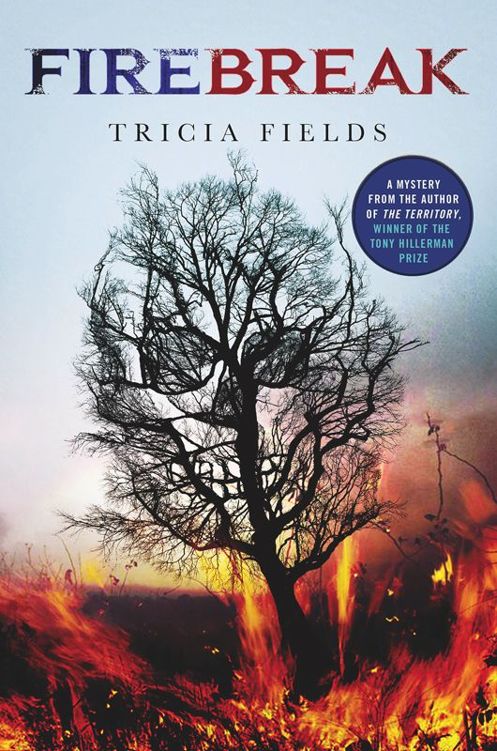 While reading news accounts of the fires that raged through West Texas in 2011, I was awed at the job the firefighters faced. I spoke with Marfa Volunteer Fire Department chief Gary Mitsche, who said most of his employees are volunteers with families and homes and paying jobs that are put on hold while they risk their lives for the community that desperately depends on them. The information that Gary provided was invaluable. I learned about a dangerous line of work that I only have the courage to write about from afar. If my fictional storytelling got some of the details wrong, those errors are strictly mine in the making. In no way did I want to sensationalize the job these men and women do, but I hoped in some small way to show the bravery of the people who put themselves in harm’s way so that we don’t have to. Thank you for the hard work that you do.

Thanks also to Todd, Molly, and Emily, and to Linnet, Merry, and Mella for your continued support and encouragement. And to Peter Joseph and Melanie Fried and all of the talented people at Thomas Dunne Books for making Josie Gray a lasting force. Thanks to Dominick Abel, the finest literary agent there is. And, finally, to my best friend, Jenna Turner, whose representation in the pages of this book illuminates her badassness, but not the lifetime friend whom I value so much.

The wind from the east pounded the watchtower and sliced across the guy wires, moaning like a violin. Josie felt the building shudder, but her attention was drawn to the north, fixated on a swirl of gray billowing upward and then disappearing against the overcast sky. The paint-splattered transistor radio propped on the window ledge beside her crackled through another lightning strike. The announcer for the Marfa public-radio station warned of forty-mile-per-hour wind gusts and dry lightning that would spark the parched grasslands like a match to paper.

The wooden rafters that held the observation room fifty feet above the ground groaned and creaked from the battering winds. Josie grabbed the binoculars off the bookshelf under the lookout window and stepped out onto the balcony and into the gusts. Pressing her back against the side of the tower, she scanned the land for smoke as sand and debris stung her bare arms and face.

Through the binoculars she located the river, and worked her way across the Mexican border to Piedra Labrada, a town similar in size and population to her own town of Artemis, Texas. The wind was blowing so hard it was difficult to tell if she was seeing dust or smoke. All over Arroyo County, spotters scanned the roiling sky, trying to stay ahead of the wildfires that raged across Texas in the worst fire season the state had ever seen.

Then she saw the unmistakable curling tendrils in the sky. She took the binoculars down and squinted into the layered shades of gray, sifting through the clouds and smoke and the desert sand beneath them, until she was able to reestablish the location. She estimated the smoke was about ten miles west of the watchtower. She went back inside the lookout to examine the maps and identify the nearest road for the spotters on the ground.

The watchtower was used jointly by Border Patrol and local police. Standing on the U.S. side of the Rio Grande, a half mile from downtown Piedra Labrada, the vantage point gave her a clear view to the access road that followed the Rio and led to four blocks of factories and bars in Piedra. On the U.S. side of the border, scrub brush and mesquite dotted the landscape, as well as brittle clumps of grass that allowed the wind to rapidly spread the fire. Canyons along the Rio Grande added to the problem, causing unpredictable gusts of wind that could carry the fire embers like a rock skimming across water.

Downtown Artemis was located ten miles northeast of the watchtower and was Josie’s principal concern. The town had been spared intense wildfires over the past several years, but the result was they had fuel ready to burn. The commissioners’ court had just extended the burn ban for an additional ninety-day period; now the combination of drought, high winds, low humidity, and dry lightning had everyone in the county watching out their back doors for the first sign of smoke.

Josie knew the thunderclouds she’d seen were deceiving. With no humidity the rain evaporated before it could ever reach the earth. With no rain to extinguish the spot fires caused by the lightning, a single strike could turn into a fire blazing across thousands of acres in a day.

She glanced at her watch. It was three o’clock in the afternoon, and the radar showed cloud cover across northern Mexico and into south Texas for at least the next eight hours. It would be a long night of watching and worrying.

A map rack made of old pallet wood sat underneath the makeshift table at the center of the watchtower. Josie bent down and sorted through the stack of laminated maps and pulled out one with marked roads into Piedra Labrada. She knew every road in Artemis, and most along the northern edge of Piedra, but with land and property at stake she had to be certain.

Josie smoothed the map out on the table and oriented it toward the west in the direction of the smoke. Running her finger along the Rio, she identified the major roads heading into Mexico and dialed Doug Free’s number. Doug was the Artemis fire chief and a thirty-year veteran of the volunteer fire department. He was a friendly man, quick with a handshake and a smile, and dead serious about his job.

When the wind picked up that morning and the forecast called for dry thunderstorms, the fire department, the sheriff’s department, and Josie’s own Artemis Police Department were put on notice. When the humidity reached such low levels, car crashes, trucks dragging chains, and even tire blowouts were enough to create a spark that could ignite a grass fire. Doug wanted to ensure that every available person was on the lookout for fire until the extreme danger passed.

“This is Doug,” he answered.

“The wind’s blowing so hard it’s difficult to estimate. I’d say the fire is contained at this point. It took me ten minutes to know for sure I was looking at smoke and not dust.”

“I’m at the sheriff’s department. Hang on. I’ll get dispatch to call it in.”

Josie couldn’t see her house on Schenck Road, located about eight miles from the watchtower, but she was uneasy. The gusts were hard to predict. Not only was her own house a worry, but she also was concerned about her neighbor Dell’s cattle ranch.

Several minutes later Doug came back on the line. “There’s a spotter in Piedra headed that way. What’s the river look like down there?”

Josie walked to the window and examined the banks of the river. “It’s a good four feet below normal. The water’s maybe fifteen to twenty feet across in that area. If the fire gets too close a strong gust will carry it over.” She paused, scanning both sides of the Rio for several miles north of the smoke. “There aren’t many trees along the Mexican side of the river, but the salt cedar’s thick on our side.”

“You have somebody connecting with Mexican authorities?” she asked.

“Dispatcher already called the fire officials. Will you be up there through the night?”

“Marta Cruz just came on duty and is headed this way. She’ll be stationed here through midnight. I’ll come out then if things still look bad.” Josie turned toward the north, in the direction of the fire that had already consumed thousands of acres. “What’s the status of the Harrison Ridge fire?”

Josie walked slowly around the perimeter of the observation room, scanning the two sister cities on either side of the Rio Grande and the vast unpopulated Chihuahuan Desert that spread out before her. With populations that hovered around twenty-five hundred people, both Artemis and Piedra Labrada faced many of the same difficulties as other border towns across the Southwest: unemployment, scarce resources, underfunded state mandates, understaffed local fire and police departments. What both cities shared was a hardscrabble spirit and determination that came from making a good life in such isolated, unforgiving conditions.

Josie faced the northern expanse and leaned against the ledge: no houses or signs of human habitation for miles. She imagined herself working as a fire spotter at one of the remaining national park lookouts, spending several months stationed in a tower not much bigger than the one she was currently standing in, with a five-mile hike from the outpost to the tower and a donkey to ferry in supplies—isolation at its finest.

Josie heard Marta Cruz’s PD boots clomping up the zigzag wooden steps below her, and then watched her appear on the outside deck that wrapped the tower.

She pushed open the door and entered, her expression betraying her fear. “Hi, Josie. How’s it going?” she asked.

“I called in smoke in Piedra Labrada. If it crosses the river we’ve got major problems. We could have fire approaching from both the north and the south. For now, it’s a watch-and-wait.”

Marta pulled her water bottle off her gun belt and drank. She had a sturdy presence, short and squat, and a resolve like no one else Josie knew. Marta’s high-school-age daughter gave her fits, but Marta never gave up hope, never gave up her demands for respect and reliance on the rules. Josie admired her, as both a single mother and a police officer. She approached both with the same commitment and determination.

Josie pointed toward the west window and they both looked out, searching for the gray smoke Josie had seen just a few minutes before. Marta drew in a sharp breath and pointed; slow spirals reached straight up into the charcoal sky, now calmed by a break in the gusty wind.