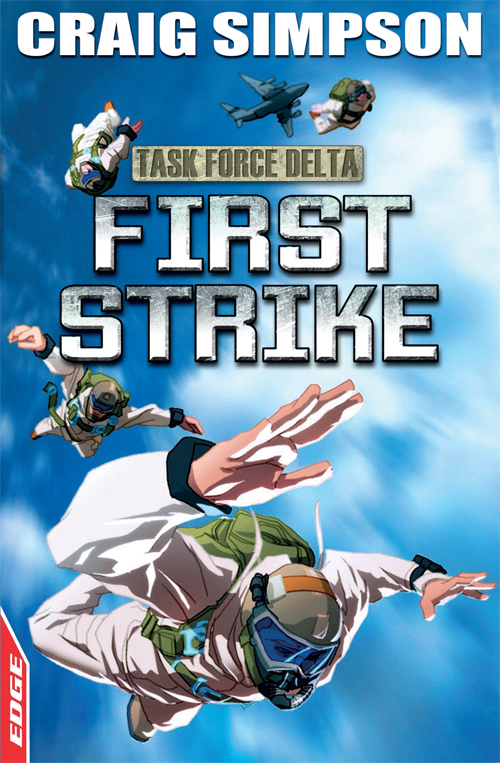 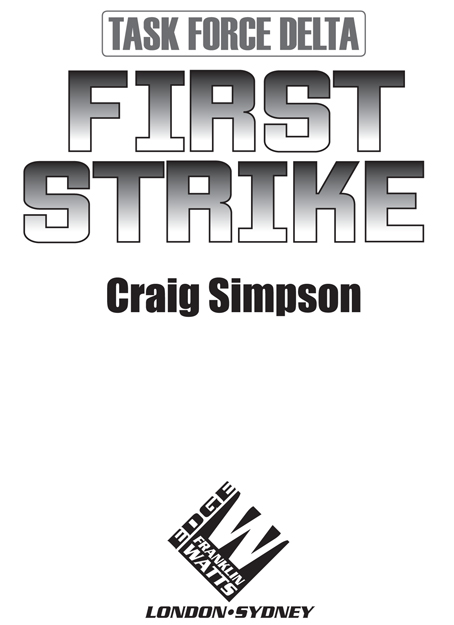 The author has asserted his rights in accordance with the Copyright, Designs and Patents Act, 1988.

Task Force Delta is a work of fiction. Any resemblance of characters to persons living or dead is entirely coincidental and unintended and all statements purporting to be facts are not necessarily true.

Franklin Watts is a division of Hachette Children’s Books,
an Hachette UK company.

Task Force Delta is inspired by one

of the United States’ top-level secret

Delta Force’s main missions are direct, counter-terrorism action. They also carry out many secret assignments including hostage rescues and raids behind enemy lines.

Delta Force (also called “The Unit”) is based at Fort Bragg, Carolina, USA. 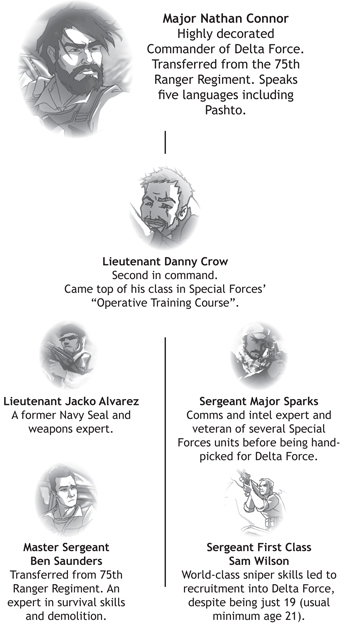 If you liked this, you’ll love…

Tariq’s big day had arrived. He’d never felt so nervous. Outside Kabul’s
Pul-e-Khishti
mosque, he paused to wrap a blanket around his shoulders against the bitter wind. He hurried to the bus depot, taking a short cut past the bustling stalls and colourful booths of the ancient
Ka Faroshi
bird market. In his rush along the narrow street, he bumped into several large domed wicker cages. The fighting
kowks
perched inside flapped their wings and squawked at him. Angry stall owners threw up their arms and cursed as he vanished into the crowd. 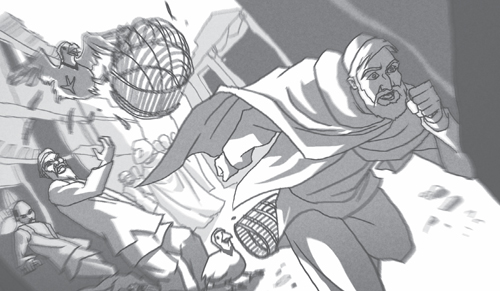 At the bus depot, Tariq boarded his battered old school bus. He slid onto the driver’s seat, reached forward and started the engine. He gripped the steering wheel tightly to stop his hands from shaking.

Out in the city’s tightly packed traffic, Tariq edged the bus forward towards the Afghan National Army checkpoint ahead. Checkpoints did not worry him, though. He saw them every day, and the soldiers and policemen waved him through. To them he was just a friendly school-bus driver.

Mushi waited at the bus stop with his hands shoved deep in his pockets, kicking stones into the gutter. He was still half asleep and he couldn’t stop yawning. School was such a pain, he thought. There was a kite fighting festival the following weekend and his kite still needed its finishing touches; an extra coating of ground glass on the strings so, when he battled with other competitors, his string would cut theirs and he’d win. The bus pulled up and Mushi clambered aboard. As usual, his friend Kemal had saved a seat for him in the third row.

Tariq crunched the gearbox and pulled off. It was almost time. The bus was full now, crammed with boys dressed in their smart school uniforms. Tariq despised them and their privileged backgrounds. Their fathers could afford to pay the school fees. Tariq knew a few had grown rich through work paid for by the American infidel, and that fact alone was enough for him to hate them. Tariq shut out all the jabbering young voices and focused hard on the road ahead. The traffic was flowing freely now.

Tariq reached a junction and turned left, heading for the city centre. Startled, Mushi blinked and shot bolt upright. He knew something was wrong. He called out to the driver, “Why are we going the wrong way?”

Tariq had prepared for this. “There are road closures. We must go this way,” he lied. His heart pounded in his chest, but he tried to remain calm. Voices inside the bus trailed off and Tariq sensed the growing unease behind him.

Tariq ignored Mushi. Instead, he pressed the accelerator pedal and increased speed.

“Stop!” other boys were calling out. Tariq began to pray, his lips moving silently… “
Allahu Akbar
…” He pulled out to overtake a car slowing down for an army checkpoint.

Mushi watched in horror as the bus roared on, busting through the plastic barriers and scattering the armed men in uniform. He turned to look back. The soldiers should have tried to stop the bus. They should have raised their guns. Now it was too late.

Tariq saw the coffee house at the end of the street. It was no secret that many local Afghan interpreters employed by the Americans visited it. To him, these men were traitors, worse than dogs.

“Where are we going? Let us off!” Mushi demanded.

Without warning, a donkey and cart piled high with vegetables trotted from a side street. Tariq saw them but kept on course. The bus rocked as it struck the donkey and the boys screamed. In desperation, Mushi leapt forward, grabbed hold of Tariq and wrestled with him, trying to make him stop.

Tariq was too strong. He pushed the accelator pedal to the floor and the engine groaned. Buildings flashed by in a blur. Mushi tried punching Tariq, and then yanked his beard. He tore out a handful of hair, but fell backwards onto the floor.

Tariq didn’t flinch. He reached for a switch on the dashboard. Behind the panel wires coiled under the bus to a bomb fixed on the fuel tank. With his other hand he yanked the steering wheel and the bus veered sharply right. The bus mounted the pavement.

Tariq had been promised Paradise. No longer would he a humble bus driver. He was to be
fedayeen
— a martyr. His was the first strike.

Mushi screamed as the bus ploughed into the front of the coffee shop. Tariq pressed the switch.

A tall plume of black smoke rose over the city. 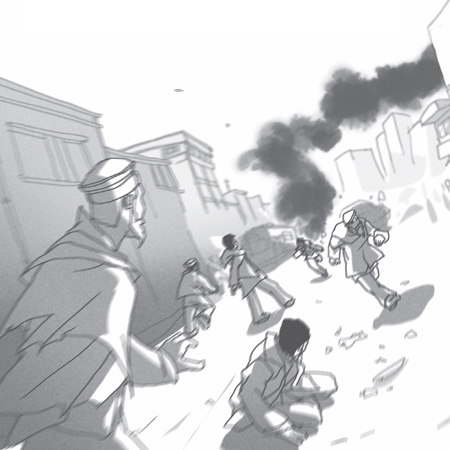 Connor had been eating some spicy chicken wings when the text came through. It had ordered him to report to the Ops Room immediately.

Grim faces greeted Connor and his men when they got there five minutes later. General Patterson, head of CENTCOM — Central Command — wasted no time in introducing them to Colonel Rogers, Chief of Combined Black Ops, and his team of intelligence officers.

“You can imagine what the media back home are saying. The Taliban have begun their spring offensive early this year and caught us on the hop. It’s just the beginning, too. We have good reason to believe they’re planning a major campaign of attacks, abductions, assassinations and suicide bombings. Gentlemen, a decision’s been made at the highest level. Innocent lives are at stake. We’re going on the offensive.”

Connor fidgeted uneasily in his chair as Colonel Rogers hooked up his laptop, projecting the files onto a large screen. The first was a detailed map. “OK, this is what we know,” Rogers continued. “Intel is sparse. Bad weather has restricted our use of drones, and the Taliban have been wise enough to limit their phone use and radio transmissions. However, interrogations of recently captured insurgents near to Doshi and Jabal Saraj have yielded a few pieces of the jigsaw. We believe armed insurgents are on the move and gathering in small groups in the Hindu Kush mountains. The leaders are going to meet with this man…” Rogers paused while he switched files. “Mullah Khan. This guy’s as bad as they come. He’s the one pulling the strings. Deal with him and the insurgents will be leaderless and in disarray.”