Read First There Was Forever Online

First There Was Forever 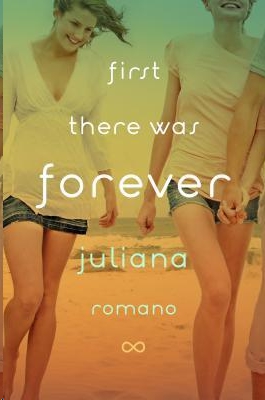 First there was forever / by Juliana Romano. pages cm

Summary: Los Angeles, California, tenth-graders Lima and Hailey have always been best friends, but now Hailey is chasing after a more popular crowd, and Lima connects not only with a different popular group, she also begins getting close to Hailey’s long-term crush, Nate.

H
ailey and I were sitting on the beach behind my house in Malibu, on the smooth, damp sand by the edge of the water. The Pacific Ocean stretched out before us. Tiny, razor-sharp shards of light sparkled across its surface like glitter. A wave nipped at our bare feet and Hailey squealed.

“Tell me everything,” I said.

“I told you already,” she replied, squinting out toward the horizon. A gauzy sheet of clouds hung across the sky, diffusing the late summer sun. “He was really cute and it was fine. It was whatever. I’m just glad it’s over with.”

Hailey, my best friend in the world, had lost her virginity the day before to a guy she met at a barbecue while she was visiting her dad in San Diego. She called from the bathroom immediately after it happened to tell me. But now her story was strangely empty, colorless. Usually, Hailey was an amazing storyteller.

“So, you’re not going to see him again, like, ever?” I pressed. “San Diego isn’t that far from LA. You guys could meet up.”

“It wasn’t like that,” she said. “And besides, I only want Nate. I don’t care about anyone else.”

Hailey had been in love with Nate Reed since the fifth grade. She wasn’t discouraged by the fact that he had never liked her back.

“Don’t look so serious.” Hailey laughed and flicked a loose chunk of sand in my direction. “Anyway, do you think I look different? Will Nate be able to tell?”

“Yes?” I said it like a question, just in case it wasn’t the right answer. I was accustomed to knowing exactly what Hailey was thinking, but there was something slippery and hard to read about her right then.

“Skyler says guys like it when you’ve had sex,” she said, digging her toes into the sand. “So maybe it’ll help.”

“You told Skyler already? When?” I asked.

“I saw her this morning,” Hailey said. “We got manicures.” Then, she lay back in the sand and closed her eyes.

I stared out at the ocean and tried to imagine that I could actually see the curve of the earth a thousand miles away. In a few days, tenth grade would start and summer would be officially over. It had been perfect. Peaceful, long, and lazy. All I did was hang out with Hailey, work on my garden, listen to music, and cook elaborate meals for me and Mom and Dad. The three of us ate on the back deck with the waxy beach air wrapping itself around us like blankets almost every single night. Once school started, everything would change. I wouldn’t have time to go to the farmers’ market and pick out strange fruits to turn into pie fillings or jams. I wouldn’t be able to lie in bed with Hailey all day, having old movie marathons and eating candy.

I turned to Hailey. In the sunless, natural light, I could see every detail of her skin—even the grayish layer of concealer she had smeared under her hazel eyes and the goose bumps that rose up on her thighs like Braille. I couldn’t believe she wasn’t a virgin anymore. Even if she didn’t think it was a big deal, I did.

Hailey’s eyes snapped open as if she could sense me staring at her.

“What are you thinking?” she asked.

Hailey looked away before she spoke. “I’m telling you. It’s not what you think.”

I waited for her to continue, but instead she sat up and brushed the sand off her forearms.

A slightly denser cloud moved in front of the sun, and the world seemed to grow a shade darker. The tail end of another icy wave sliced at our feet and we both flinched.

“It’s freezing out here,” Hailey said. “I’m so over the beach. Can we go inside and pick at your mom’s weird health food?”

Inside, Mom made us almond milk smoothies, and we curled up on the big white couch to drink them. The first floor of our house was one open sprawling space with the kitchen, the living area, and the dining area all flowing together. The back wall was made entirely of sliding glass doors that opened onto the beach, so salty air was always blowing in. Even our closets smelled like the ocean. Our furniture was mostly white and minimal, but Mom scattered Mexican blankets and painted pots from Africa around the room for color. Mom and Dad used to travel a lot and collect things before I was born. That’s actually how I got my name: Lima. Lima is the city in Peru where my dad proposed.

“‘Trust your instincts this week, Cancer
,
’”
Hailey read aloud from the
LA Times
horoscope section
. “‘When it comes to a big decision, your intuition will guide you. Be willing to take a financial risk, but discuss your options first with a trusted few.’”
Hailey rolled her eyes.
“
This is so not helpful.”

Mom perched on the arm of the couch. With her long blond hair swept into a ponytail, and wearing jeans and a T-shirt, she almost looked like a high school student.

“Crazy,” Hailey deadpanned. “Her new thing is she smokes in the bathroom and then lights all this incense to cover it up. I’m, like, ‘Mom, all the Nag Champa in the world isn’t going to disguise the smell of cigarettes in a room with no windows.’”

Mom frowned. She was always protective of Hailey. When we were in fourth grade and Hailey’s parents were getting divorced, she actually lived with us for three weeks. One night, she and Mom slept together in the guest room because Hailey’s nightmares had gotten so bad. I confessed to Mom later that I had been jealous, but she explained to me that sometimes when you have a lot of something, like love, you have to share.

“Anyway, these horoscopes are bullshit,” Hailey continued. “Sorry for cursing, Laura. I’ll put a penny in the swear-word jar.”

Mom laughed. We didn’t actually have a swear-word jar but somehow Hailey always knew what to say to lighten the mood.

Hailey sunk deeper into the couch and flipped to a new page of the newspaper.

It bothered me that she was acting like having sex was no big deal. I had barely ever made out with someone, so it’s not like I could relate to her experience, but I still wanted to know what it had been like. I wanted her to share more, to include me in everything she was feeling. Instead, it was the opposite. All afternoon, she had seemed like she was only half there.

I gazed outside at the flat white sky. The afternoon tide was coming in. A big wave crashed on the beach, and the foam gnashed at the sand like teeth.