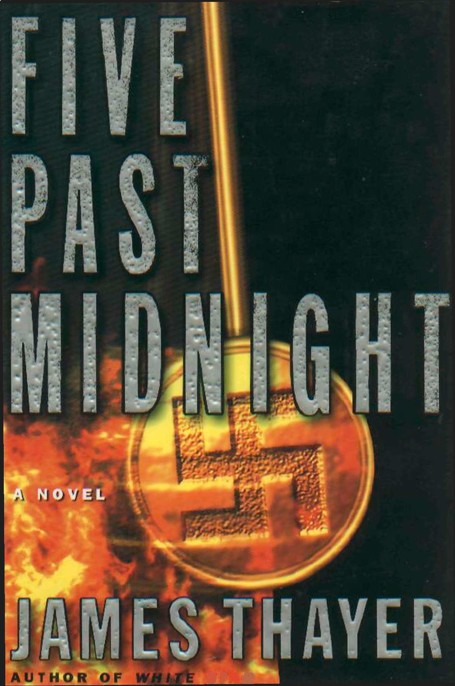 This book is a work of fiction. Names, characters, places, and incidents either are products of the author's imagination or are used fictitiously. Any resemblance to actual events or locales or persons, living or dead, is entirely coincidental

including the right of reproduction

in whole or in part in any form

SIMON &
SCHUSTER
and colophon are

Victory is a thing of the will.

DONOVAN NEVER
recorded the meeting in his journal, but he would remember it in fine detail to the end of his days. It began when the usher tapped lightly on the massive oak door, then pressed a small button hidden in the wainscoting to notify the Secret Service watch officer that the spymaster was about to enter the office. Above the button a portrait of Andrew Jackson glared down at them.

"He's expecting you, General," the usher said in a low voice appropriate for the august place. When he pushed open the door, the spymaster stepped through.

Franklin D. Roosevelt was sitting behind his desk, his face green in the light of a banker's lamp. The chandelier had been doused, the blackout curtains were drawn across the windows, so the walls of the Oval Office were a periphery of darkness. A mail pouch, copies of the
New York Times
and the
Washington Post,
a pitcher and glass, and several marble paperweights were on the desk.

The president waved the general into the room. Behind the desk, two tasseled United States flags hung from poles. The pennant Roosevelt had designed for himself when he was assistant secretary of the navy
was
displayed on a smaller staff near the fireplace. On a stand at the end of the desk was an intricate reproduction of the USS
Constitution,
one of the many ship models in the president's collection.

General William Donovan, director of the Office of Strategic Services, placed a manila envelope on the desk, pushing it across to the blotter so the president would not have to use the tongs he kept in a drawer. White House carpenters had raised the desk six inches to accommodate the president's wheelchair, and when Donovan sat in the low leather chair opposite the president, the desktop came almost to Donovan's shoulders.

Roosevelt chided the general by lifting the envelope and making a production of weighing it. "You are a lawyer by profession, Bill. You write briefs. But you never write anything brief."

Donovan should have chuckled dutifully. Not this night. The contents of the envelope precluded levity. Like most Americans, the general loved Roosevelt's voice, the fireside companion that had carried America through the bleak years. Every time the general heard that silky, compelling, faintly exotic voice, he felt rejuvenated and stronger. But again, not this night, not with the envelope.

Roosevelt pulled a Camel from its pack and stabbed it at a Bakelite holder that had white teeth marks on the stem. His hands trembled, and only after three attempts did he succeed in planting the cigarette. When he leaned forward for his Ronson, the president's face came into the lamplight. Donovan's breath caught.

Twenty-three of Roosevelt's sixty-two years had been spent in a wheelchair. Yet he had been the most vibrant man Donovan had ever met, exuding health and virility and energy. The president had possessed a sheer physical magnetism. But in the three weeks since their last meeting, Roosevelt's skin had taken on a ghastly pallor and a translucence that revealed the skull beneath. The bags under his eyes had darkened, and his lips had acquired a blue tinge. Stray strands of his hair flitted like insects in the lamplight above his head. The president was wearing a tweed jacket so old that it was shiny.

Roosevelt inhaled the smoke deeply then let it trail out his nostrils. He abruptly lifted his head in the manner that led many to suppose he was arrogant but which simply allowed him to see through his spectacles. "Can you spare me all the reading, Bill? It's late."

Bill Donovan was in plainclothes, as always. He was a small man, and scrappy, with ajuttingjaw and a boxer's nose. Harry Hopkins, called him the Irish terrier because the OSS chief always seemed on his hind legs at the end of a leash waiting for his master to let him go. Tonight he would try again.

"Mr. President, I will summarize the contents of my envelope in three sentences."

"First, each and every day the war in Europe continues, twenty- eight thousand men, women, and children die."

"Second, a group of German staff officers is ready to assume leadership of the Third Reich if an opportunity arises, and will instantly surrender."

Roosevelt's eyes lost their avuncular angle and became unreadable. He lowered the cigarette holder to an ashtray.

"Finally, Mr. President, we have confirmation of General Eisenhower's report that the German SS is preparing a national redoubt in the Bavarian Alps, where Hitler may be able carry on the war for another two years."

President Roosevelt started to speak but his throat rattled, and he bent low over the blotter, caught in a coughing fit that left him breathless and even more pale. He lifted the glass of water with a shaking hand. Water splashed to the desktop. He sipped carefully.

He was finally able to rasp, "The bastard is going to outlive me, isn't he?"

Donovan avoided the question. "Hitler has recently pledged, and I use his words, that he will fight 'until five minutes past midnight.'"

The president blinked several times, and his mouth silently moved. He seemed awash in melancholy. He gripped the wheelchair rims and backed away from the desk. Carpet in the Oval Office had been removed to allow the wheelchair to move more easily. He rolled to a window overlooking the lawn. Most Americans had long before taken down their blackout curtains, but Roosevelt liked "to remain on war footing," as he once told Donovan. The president pushed aside the curtain, a small act that seemed to consume the last of his strength. It was ten o'clock in the evening. Streetlights and garden lamps and the Washington Monument were dark for the duration, so there was nothing to be seen through the window.

Yet he peered into the blackness for a full minute. Then without turning away from the window, he said softly, as if in the presence of the dead, "You take care of it, Bill."

That was just enough. General Donovan rose from the chair, retrieved the manila envelope, and fairly sprinted out of the office.

OTTO DIETRICH was curled on the metal cot under a tattered blanket that smelled of urine and old blood. The blanket was alive with biting and burrowing vermin, yet he lay motionless, 1 too uncaring to scratch. His eyes were closed tightly and his mouth was pulled taut in fear.

They always came at noon. A few more minutes. They had left him his watch so he would know when his moment had arrived. But his belt, shoelaces, gold badge, and wallet had been taken. And his bridgework, lest he try to slash his wrists with his false teeth, he supposed.

Dietrich's cell contained the cot and blanket, a chamber pot, and nothing else. The cell was belowground. Water seeped down the mold- encrusted stone walls to the floor where it gathered in brown pools speckled with rotted waste. A single bulb was behind an iron grate in the ceiling, and it was never extinguished. The door to the corridor was an iron sheet with a viewing port at eye level. Another hatch was near the floor, through which a soup bowl and a cup of water was pushed once a day, and through which would come his
Henkersmahlzeit,
the condemned's last meal. There were no windows to the outside, and the cell walls were
so
thick that sounds could not breach them — not the guards' footsteps, not the wind, not the other prisoners' cries. The only noise in the cell was Dietrich's stertorous breathing and the steady dripping of water.

With an effort that made him moan, the prisoner struggled to a sitting position. He would meet his fate with dignity and would stand when they came for him. He had not bathed or shaved in three months, nor had he had a change of clothing. His skin was covered with dirt and insect bites and open sores that refused to heal. Grease and grime matted his hair and beard.

Dietrich doubled over with a grinding cough. Pneumonia, he suspected. His lungs rattled with each breath. He had lost two teeth while in the cell. His hands shook uncontrollably, and the skin around his fingers had shrunk for want of nourishment. They resembled claws.

Dietrich levered himself from the cot. He placed a hand on the oozing wall to steady himself. He spit into a hand, and pawed his face with it, trying to wipe away the filth. They had reduced him to an animal's existence, but every day he cleaned himself as best he could. He straightened his foul clothing and turned to the door. They were always prompt.

Dietrich's cell was in Wing B of the Lehrterstrasse Prison, across the Spree River from Berlin's Tiergarten. The prison was star-shaped, with three floors of cells. It had been built in the
1840
B
,
patterned after London's Pentonville. The structure had no adornment. Brick walls and iron bars across small windows spoke of its sole purpose, to punish. Berliners found it impossible to pass Lehrterstrasse Prison without shivering. Many entered the prison. Far fewer left alive. Executions occurred in the cellar.