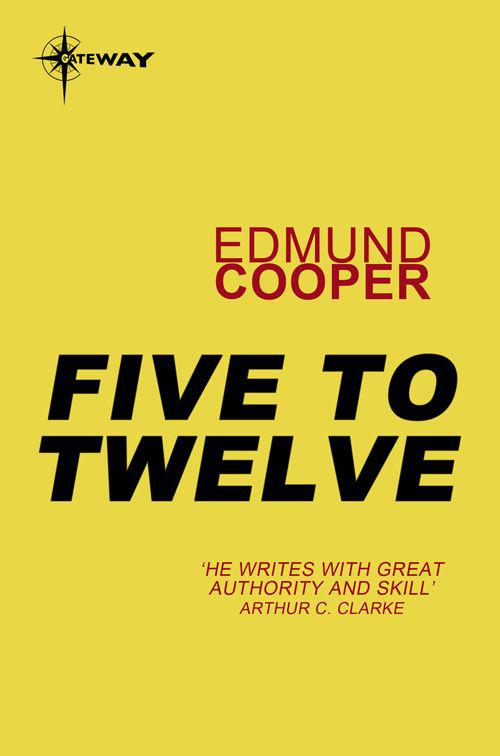 I have a rendezvous with Death

At some disputed barricade.

I
T
was a fine autumn evening. Stars hung in the sky like a frozen stream of diamond dust, the larger and nearer ones presenting a glittering illusion of mobility as if they twisted slowly on invisible wires.

The air, fortunately, was still—fortunately, because Dion Quern hung by his finger tips half a mile over London. One decent breath of wind and he would go hurtling to his death at thirty-two foot per second per second. It would not be an altogether bad solution, he reflected. There were worse ways of solving unfunny equations than dancing briefly through a warm sea of darkness to the ultimate dark.

But, somehow, he knew there would be no wind. Those who look for death have to wait patiently till death finds those who look.

He had been sunbathing on the roof of London Seven all afternoon. It was a pleasant way of spending the time—apart from the fact that he had become very hungry. But even if he had had any lions, it would not have been safe to chance the express pan again. Unattached sports attracted too much attention.

The hell with it! A little hunger was a lovesome thing, It sharpened a man’s perception. Presently—with luck and a fair degree of poetic licence—he would have lions aplenty. Then he could shuttle to a restaurant in one of the other London towers, gorge himself to satiety, accept the advances of the first unrepugnant dom and, in the morning, take
himself along to the nearest clinic for a badly needed time shot.

Such was the philosophy of Dion Quern, age forty-six, as he manoeuvred himself inch by perilous inch to the balustrade of the two hundred and fourteenth floor apartment he had chosen in London Seven. Anyone who could live on the top floor of one of the London towers must be absolutely dripping with lions. Whether they were plastic lions, gold lions or precious stones didn’t matter a coprolite All that mattered was that he should quickly lay his hands on the trove and depart without hindrance at Mach three.

There was no light from the apartment. So far as he could judge, during the last couple of hours there had been no sound, no any goddam thing. Ergo the box was un-inhabited. The ferret was doubtless flushing rabbits in the plains.

Only a high-powered dom could drip the lions necessary for such a box. Dion hoped she was fat, flabby and a hundred plus. He hoped she was coming to the end of her time shots and that she would die in a fit of senile ecstasy when next her favourite sport went riding.

He pulled himself over the balustrade and collapsed in a thankful heap, breathing heavily. Nobody had yet paralysed him, he had not been electrocuted; and if there was an infra-red system, it had—as yet—done nothing to promote the cause of justice at all.

But what the hell! Why waste lions on elaborate keep-out systems for top floor boxes. Nobody but an idiot would try to force them externally.

The french window looked easy. It was easy. Too easy.

He forced it and slipped into the apartment.

And then his number came up.

The lights went on and a dom wearing very little but a small laser pistol that pointed disturbingly at his navel said: “Hi, sport. I’ve been waiting quite a while. There were times, even, when I thought you might disappoint me. Now relax very gently and you may possibly avoid burning.”

Dion let out a sigh and stood quite still. Laser pistols were fearsome things. Apart from blinding you, they could produce quite nasty little flesh wounds. He imagined blindness and instantly became a devout coward. Then he dismissed the possibility with a shrug. In this day and age what dom in her right mind would disfigure, maim or incapacitate a less than repugnant sport.

Damned expert, this one. She deflected her aim, pressed the button for a split second. He looked down in amazement at the smoking needle hole where the trews covered his thigh. Then he felt the pain. There would be one hell of a blister, presently.

The woman laughed. “Stripling boy! You should know better than to play games with the grown-ups.”

“You picked the wrong box, stripling. There are even
pressure metres built into the ceiling. I’ve been waiting for you for some time. I’m the C.P.O. for London Seven.”

It was Dion’s turn to laugh. He had scored three lemons. Of all the hundred thousand boxes in London Seven, he had to choose the one occupied by the Peace Officer. He would have been better employed as Robin Hoodlum raiding Scotland Yard for the Crown Jewels.

“What are you?” she demanded. “You’re obviously no genius of the snatch trade. So what sort of genetic joke are you?”

She put a blister on his other thigh. It was a bigger one.

“God ride you, I’m a poet,” he confessed irritably. “A reactionary scribbler. Now kindly hand me over to the drycleaners, and I’ll bid you a very good night.”

“Not so fast, my stripling meistersinger. The night needs no time shots. We will talk a while. You may even aspire to the giddy heights of interesting me.”

Dion was willing himself to stay upright. But the hunger, the futile exertion of climbing down from the roof—to say nothing of the laser burns—were cumulatively somewhat degrading. He began to sway slightly.

“You look pale, little one. Are you afraid of indecent advances?”

“I’m hungry,” he sobbed. “I’m just plain bloody hungry. Also tired… I couldn’t make it even if you tried.”

“Tut-tut. What problems,” said the Amazon. But her
voice had softened. She picked up a combination purse lying by the side of her four-poster bed and slipped the laser pistol into it. Then she went across to the vacuum hatch and spoke into the pick-up.

“Half of brandy—
Remy Martin
, perhaps—a bottle of good hock, say the
Rampant
‘67, cold chicken, green salad, French bread and accoutrements for two. Five from the time of order… Oh, and black coffee. Out.”

Then she turned to Dion and indicated a restful looking chair. “Drape yourself, love. It’s been a hard day’s nocturne. Forget the high drama. I’m Juno Locke.”

“Stunned, of course,” said Dion formally. He sank gratefully into the chair.

Theoretically, he should have surprised her. In practice, he hadn’t. She didn’t even bother to cover her breasts—which, under the circumstances, was less than an unveiled insult. He tried to hate her, but it cost too much energy. Besides, he was damned hungry and she wasn’t a day over seventy-five. It was the older doms that were the worst. They ran you dry, then howled for more. This one looked as if she never had to howl. Blonde, beautiful and probably as tough as any two sports he could think of. Thank Marie Stopes she hadn’t yet tried any rough stuff.

“You’re not bad,” said Juno, eyeing him critically. “You’re not too bad. I might even decide not to hand you over to the psychos… If you amuse me.”

She should have been outraged, but she only laughed.
“The name is Juno, not Jocasta. How would you like to be raped?”

“Not until after the brandy—unless you have a better anaesthetic.”

“That’s my little troubadour,” said Juno. “I’m beginning to like you.”

T
OWARDS
the end of the twentieth century, birth control ran riot. Contrary to the laws of probability, the proposition of repetitive history, and the prognoses of philosopher-psychiatrists—and despite the most comprehensive and insane build-up of lethal instruments in the history of man—there were no major wars. So birth control was the obvious biological solution.

That it came to be so easily accepted as a solution, even in such places as China and India, is a mystery on which the foremost experts on the War Against Fertility continue to disagree. Mankind has never been renowned for accepting logical solutions to its most serious problems. As a rule, the degree of logicality of solutions seemed to vary inversely with the urgency or seriousness of the problems. So when an eminently sensible solution disposed of the most serious problem of all—the threatened doubling of the world population in the latter half of the twentieth century—even the politicians Could be forgiven for being a little nonplussed. To have geared one’s self up for an Armageddon that never took place was a frightening thing. By the year A.D. 2000 the incidence of nervous breakdown among distinguished statesmen was about one in three. Few presidents, prime ministers or first secretaries were eager to seek a second term of office. The fascination of power for its own sake was waning.

The Magic of Saida by M. G. Vassanji
Nine Days in Heaven: A True Story by Dennis, Nolene Prince
Blind Sight (A Mallory Novel) by Carol O'Connell
Easy as One Two Three (Emma Frost) by Rose, Willow
The Door in the Hedge by Robin McKinley
Sacrilege by S. J. Parris
The Bird and the Sword by Amy Harmon
4 The Killing Bee by Matt Witten
Ultimate Justice
Trainwreck 2 (Trainwreck #2) by Nelle L'Amour
Our partner