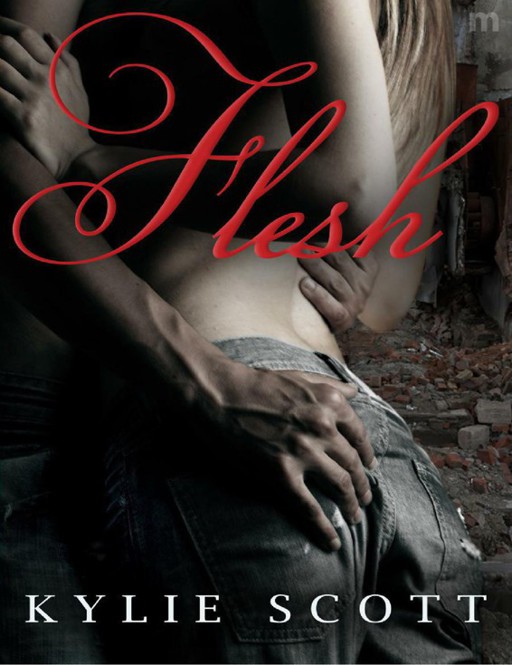 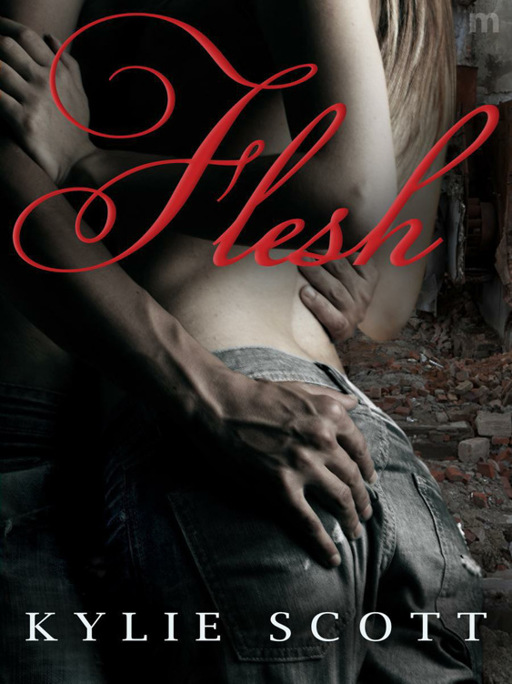 Ali has been hiding in an attic since civilization collapsed eight weeks ago.

When the plague hit, her neighbors turned into mindless, hungry, homicidal maniacs.

Daniel has been a loner his entire life. Then the world empties and he realizes that being alone isn’t all it’s cracked up to be.

Finn is a former cop who is desperate for companionship, and wil ing to do anything it takes to protect the survivors around him.

When the three cross paths they band together; sparks fly, romance blooms in the wasteland and Ali, Daniel and Finn bend to their very human needs in the ruins of civilization.

Lust, love and trust al come under fire in
Flesh
as the three battle to survive, hunted through the suburban wastelands.

Room With a View

For Hugh. With thanks to Babette and Louise.

Daniel looked down the barrel of the shotgun al set to blow his brains out and grinned. These days, even a gun-toting, trigger-happy female was a delight to behold, and she was perfect.

Sunlight streamed in through the kitchen window. She all but shone with it, like an angel or a princess or something. Something a little overdue for a bath and a lot on edge, but something very good just the same. The feeling of sweet relief rushing through him nearly buckled his knees.

Tall and curvy, around thirty at a guess, and uninfected, she was by far the best thing he had ever seen in jeans and a t-shirt. Not even the dried blood splattered on the wal behind her could diminish the picture she made.

Sadly, his girl did not appear to share his joy.

Wary gray eyes devoid of even a hint of elation watched him down the barrel of the gun. He refused to be discouraged; his smile did not waver. “Hey.”

“Gun on the floor. Slow.” Her voice sounded dusty with disuse. “Eject the clip.”

“Okay.” Daniel did as told, keeping his happy face on her the whole time, hunching a little when he stood back up. He gave the old rucksack at his feet a nudge with the toe of his sneaker. It currently contained the sum total of his worldly goods, but she was welcome to it. “There are just a few cans of soup, and Irish stew. Help yourself.”

Plush pink lips parted as though she might speak but then she paused, as if she thought better of it. The grimy finger squeezing the trigger shook some. It was good to know she wasn’t completely okay with blowing his brains out right here and now. That was nice. Of course if her nerves got any worse, they might be in trouble just the same.

He softly cleared his throat, trying not to startle her. “You’ve, ahh, got the safety on. You see there?”

Daniel nodded to the dangerous firearm pointed his way and waited for the confusion to cross her pretty face, for the golden moment of distraction to appear. It didn’t happen. Her lips puckered, but not for kissing. The withering glare confirmed it.

God bless her. She wasn’t falling for any of his bullshit. Which made it time for Plan C. Plan A would have had her falling into his arms, demanding immediate sexual gratification. He wished. And B was for the Bullshit, which had not gone down, thus leaving only C, for Clusterfuck.

Then, everything happened at once.

He grabbed the barrel of the gun with both hands and shoved it skyward. Her reflexes kicked in, and her finger jerked hard on the trigger. The resulting boom was beyond deafening. Heat seared the palms of his hands. His ears rang as if a brass band had set up shop in his head. A shower of plaster dust rained down on the two of them like confetti at a wedding, which had to be a good omen.

While she coughed, sneezed and shook off the dust, he grabbed her. He pulled her in against him with one hand while keeping a good grip on her gun with the other. She and the gun definitely needed to part company, pronto. His arm wrapped around her belly and her ass tucked in against his hips. Testosterone and pheromones ran riot, and his blood surged hot – the bulk of it heading due south. His brain was on its own. Fragrant or not, she felt beyond good spooned against him.

Unfortunately, there was still the matter of the gun. She clung to the thing like a lifeline.

“Let it go,” he ordered. She ignored him, not a surprise.

Daniel held the weapon high above her head, waiting for gravity to take its eventual toll. The woman stretched and strained, stubborn as hell, but her stranglehold slowly slipped away until she was clawing at thin air, sliding down his body till the heels of her boots reconnected with the kitchen floor.

“Easy,” he soothed, and flicked the safety on the gun. He slid it across the kitchen counter, far from temptation.

Her body trembled and her hands latched onto the arm around her waist. Shit, he didn’t want to scare her. That wasn’t the objective.

But her fingernails were digging deep, drawing blood and stinging as she tried to push him off. Smal sounds of distress came from her throat like a wounded animal. She had probably been on her own since civilization came to an end two months back. What must she have been through? While one wrist wasn’t hard to catch, two was tricky when his girl was so determined. “Calm down. Please, I’m not going to hurt you. You’re the first uninfected I’ve come across in weeks. Talk to me.”

“Let. Me. Go,” she gritted out between clenched teeth. Music had nothing on the sound of her voice.

In reply she growled and squirmed and carried on. Her soft warmth was heaven, causing his body to respond for the first time in a long time. Having her rub up against him was worth almost getting shot any day of the week.

Her t-shirt rode up a little and her jeans eased down some. His fingers made contact with silken, smooth skin and the curve of a hipbone. He had to remind himself to breathe. The urge to wrap himself around her and hold on tight was huge. She must have felt his hard-on nestled against her ass because the wrestling kicked up a notch. But she wasn’t going anywhere. No chance. His girl disagreed.

She slammed her head back, catching him on the jaw and coming close to dissecting his tongue with his own damn teeth. It couldn’t have done her precious skull much good either. “Shit! Damn it. I am not going to hurt you. Stop it.”

She, of course, chose not to, going wild in his arms for all the wrong reasons. In the end he let her wear herself out, waited till she hung limp in his hold, damp with sweat and sucking in oxygen as if she’d run a minute mile.

“Are you finished? Going to be a good girl for me?”

With a sullen little huff, she nodded her agreement. The dark blonde ponytail, littered with plaster dust, bobbed up and down beneath his nose.

Nice and slow he took a step back, reluctantly drawing his arms away from the warmth and softness of her. His eyes, however, didn’t stray from her for a second.

It didn’t take his girl long to react. An elbow flew at his face, and she spun around. Her own momentum delivered her back to him.

Their chests collided in a wonderful manner. He locked his arms around her, giving himself over to the thril of it. The press of her gorgeous, generous tits against him nearly stopped his heart. For a brief moment she wasn’t fighting him. For a treasured millisecond she stopped to regroup and his soul swel ed. She was his very own personal nirvana.

“You promised to behave,” he scolded. “Bad girl.”

“Good idea, I love where you’re going with that. But let’s say we talk first? Get to know each other?” He gave her the biggest shit-eating grin of his life, the one that had been dying to burst out of him since she’d burst in.

What the hell. He couldn’t remember having this much fun in years, and definitely not in the last two months. The sound of his own voice was a novelty; having someone to hear him an absolute joy.

“You were going to tell me your name,” he said, but his girl still wasn’t done.

For her next move, she attempted to feed him his balls via her knee. He managed to block it by jamming his legs together to catch hers. Before she could start scratching or slapping, he pulled her wrists behind her back, securing them in one hand. This worked against him, however, because of the way her breasts strained against the front of her t-shirt. The lace cups of her bra bore a mesmerizing pattern.

It drove him crazy, as though the flowers and curlicues bore the code to all of her deep dark secrets. Damned if he wasn’t going to pop a blood vessel trying to decipher it.

While he was distracted, the ingenious woman lunged at him with sharp little teeth. He fast risked losing a nipple to her fury.

“Now that hurts.” A sound smack to her rear produced a startled yelp. The jaws of death unlocked. Thank God. Daniel wrapped her ponytail tightly around his fist to prevent a repeat performance and got down in her face, nose to nose, grinding his teeth and feeling more than a little annoyed. “That was not nice. Stop and think. I have done everything possible not to hurt you. I only want to talk to you. You’ve shot at me, scratched me, kicked me, and now you start biting. Apologize.”

The woman jerked back, her eyes as round as the wheels on his trail bike.

“Well?” He waited with ill patience while she said nothing for a good, long time. More than long enough for him to notice she had a smattering of freckles across her nose and cheeks, like a scattering of sugar. He had never been into freckles but there was a first time for everything.

“What do you want?” she hissed.

“Let’s start with being friends, that’s probably going to chalenge you enough for one day.” He let out part of a breath. It wouldn’t do to let his guard down fully when the girl was this tricky. “Why attack me? We’re both on the same side, aren’t we?”

She snorted. Her eyes skittered away from him, her body twisting, continuing to test his grip.

“Behave for a while and I’l try the letting-you-go thing again. In the meantime, why don’t you try using your words? Talk to me.” He hadn’t thought her face could harden any further but she managed it just fine. Her mouth tightened, and stony, pretty gray eyes stared up at him, as if she was imagining the size of the hole she could blow in him with her big gun.

“I’m real y happy to see you,” he ventured. “You know we could go someplace safe, and share a can of stew. Or soup… Whatever.

Your choice. I don’t mind. Totally your call.”

For a first date, it sounded shit even to his ears. She seemed less than impressed. The woman glared at him like he had grown a second head, and it wasn’t any better than the first.

“Right,” he said, straightening his spine. “Then we’re just going to have to do this the hard way.”

Ali glared at the stranger with all the animosity she could muster. Having spent eight weeks hiding in her neighbor’s attic, living like a rodent while the world fel apart outside, there was a hoard of hostility at her disposal. An ample amount of petrified too, but hostility came in handier.