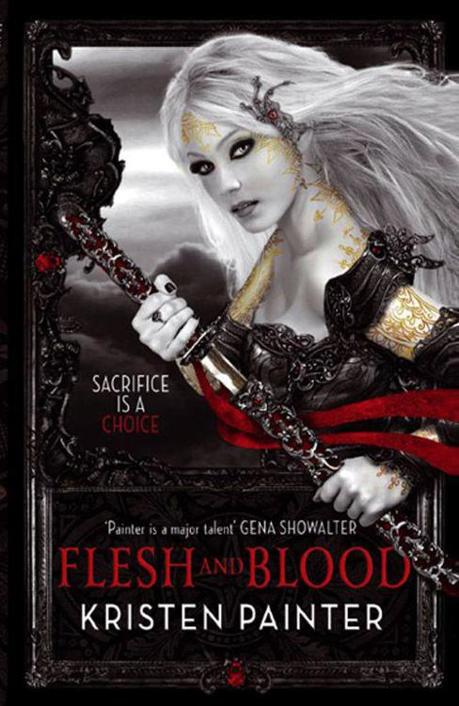 A
familiar shape walked among the boxcars. Long dark hair, backpack tucked over her shoulders, flashlight in hand. What little light there was passed through her translucent form.

The circle of her flashlight beam pinpointed something. She walked toward it, stared at it for a moment, then nudged it with her foot.

In a flash, a thin, dark shape lunged up and grabbed her. Her mouth opened in a silent scream. The flashlight tumbled from her hand and landed with the beam pointed at her. The shape was human, bones with a little skin stretched over them. It clung to her. Fangs, white in the flashlight’s beam, tore into her throat. Blood spattered, soaking the front of her sweatshirt. The creature gorged itself as the fight drained out of the girl’s body. Her fists stopped battering. Her feet ceased their kicking.

The creature raised its face and turned its cloudy eyes into the light. A remnant of flesh hung from its scrawny jaw.

The creature was Malkolm. The girl was Fiona.

The image flickered and disappeared.

For Richie, my best friend,
my biggest supporter,
my loudest fan,
my hero,
my husband.

Preview of
Soulless
by Gail Carriger

About the time of the end, a body of men will be raised up, who will turn their attention to the prophecies, in the midst of much clamor and opposition.

T
atiana needed to die. The thought pushed Chrysabelle on until her shoulders burned and her arms shook. Sweat drenched her thin white T-shirt and dampened her hair, but no matter how many times she pounded her fists into the heavy bag, no matter how hard she punished her body, nothing changed. Her mother was still dead. Tatiana was still alive. And Chrysabelle still owed Mal for the promise she’d made to him.

Over and over, she struck the bag, but the memory of her mother dying in her arms still haunted her. She hit harder, and her conscience punched back, heavy with the guilt of her unpaid debt.

Mal had helped her when she needed him. And she’d done nothing to uphold her end of the deal. She’d barely spoken to him in the two weeks since they’d returned from Corvinestri and most of those words had been on the plane ride home. Her fist slammed the bag. Wasn’t his fault Maris was dead. It was Tatiana’s.

The comarré life taught that revenge served no purpose. Chrysabelle was starting to think otherwise.

She walloped the bag again, then spun and landed a kick with a loud, angry grunt. She dropped her hands and stared at the bag, not seeing it. Just the mess she still needed to deal with.

She walked away from the bag, pushing hair off her face with her taped hands. She should be downstairs, reading through the journals Maris had left behind, trying to find some vampire weakness she could exploit to Tatiana’s detriment. Instead, she was hiding out in the gym. No, not hiding out. Training. For when she next met the vampiress who’d killed her mother. And with the covenant between humans and other-naturals gone, being fight-ready was going to matter.

Just like Mal thought finding a way to remove his curse mattered. Which it did. She approached the bag again and punched her fist into it. Most comarré wouldn’t dream of creating such tension between them and their patron. Not that most comarré had a cursed vampire for a patron. If Mal even was her patron anymore. She sighed. Her life was an
unqualified
mess.

‘Argh!’ She whirled and kicked the bag, flinging sweat. Velimai, her mother’s former assistant and now hers, stood in the doorway, watching.

Your mother loved beating up that bag,
Velimai signed, her face wistful. Wyspers were mute, except for an ear-piercing scream capable of killing vampires.

‘It helps.’ Chrysabelle fought a wave of sadness to smile at the wysper fae. They both missed Maris. Her presence filled the house.

Velimai nodded back, her fingers moving.
Ready for dinner?

‘Steak?’ Chrysabelle asked hopefully. With no patron and no bite, steak seemed to keep her strength up and maintain her
superhuman senses better than all the other foods she’d tried. No wonder it was served so often at most comarré houses.

What else?
Velimai signed, smiling.

So long as Velimai didn’t sign too fast, Chrysabelle could understand most of what she said. ‘I’ll grab a shower and be down in five.’ She started ripping the tape off her hands with her teeth.

The hot shower felt good, but alone in the steam, Chrysabelle had too much time to think.

She’d sent Mal blood, not just because it was the proper thing to do for one’s patron – however suspect his hold on her blood rights might be – but because she had to drain it from her system anyway. According to Doc, Mal’s sidekick of sorts, her efforts were futile. Mal had left the blood untouched in the galley refrigerator of the abandoned freighter he called home. Maybe he thought he’d have to kiss her again if he consumed it. She grimaced at that memory and added more cold water to the spray falling over her. No, neither of them wanted to go there again. What he was doing for blood, she had no idea. She wanted to pretend she didn’t care, but that would be a lie. Caring about her patron was ingrained in her makeup. One hundred fifteen years of comarré indoctrination was a tough thing to ignore. The struggle between who she wanted to be and who she had been played out even in daily decisions. How many years would it be before she thought of herself not as a comarré but simply as a woman?

She rinsed the soap from her body, letting the water beat against her skin. Her thoughts returned to Mal. Did he feel like she’d betrayed him? She hoped not, hoped he realized she was just waiting for the time to be right. Going back to Corvinestri
could be very dangerous for both of them. Surely he understood that.