Read Fletch and the Man Who Online

Fletch and the Man Who 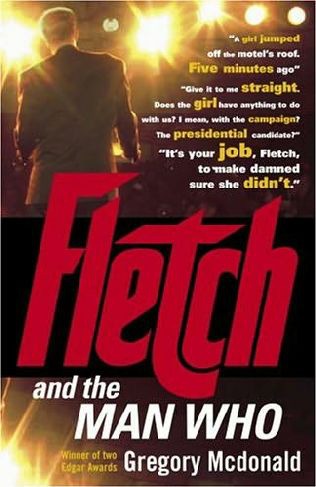 GREGORY MCDONALD
Fletch and the man who

The author of twenty-six books, including eleven
Fletch
novels and four
Flynn
mysteries. He has twice won the Mystery Writers of America’s prestigious Edgar Allen Poe Award for Best Mystery Novel, and was the first author to win for both a novel and its sequel. He lives in Tennessee.

Exits and Entrances
Merely Players
A World Too Wide

The Education of Gregory Mcdonald
(Souvenirs of a Blown World)

“Hello.” The sounds behind Walsh were of several people talking, men and women, the clink of glasses, and, at a distance, heavy beat music—bar noises.

“Are we enjoying a crisis already?”

“There’s always a crisis on a political campaign, Fletch. On a presidential campaign, all the crises are biggies. You’ve only got a few minutes to learn that.” Despite the background noises, Walsh was speaking quietly into the phone. “Wait a minute,” he said. At the other end of the phone someone was speaking to Walsh. Fletch could
not make out what the other person was saying. His mouth away from the phone, Walsh said. “Any idea who she is?” There was more conversation wrapped in cotton. “Is she dead?” Walsh asked.

Steam was coming through the door of Fletch’s bathroom.

“That’s what we’re trying to find out,” Walsh said. “Your plane was late? You’re late.”

“Landed unexpectedly in Little Rock. Guess the pilot had to drop off some laundry.”

“You were supposed to be here at six o’clock.”

“Your dad’s very popular in Little Rock. Took a survey of an airport security cop. He said, ‘If Wheeler doesn’t become our next President, guess I’ll have to run for office myself.’ What a threat!”

Fletch said, “I wish I knew the topic of this conversation.”

“I’m downstairs in the lounge, Fletch,” Walsh said. “I’ll handle things here, but you get yourself to Dad’s suite
tout
.”

“I’ve never met the candidate. Your esteemed pa. The governor.”

“Just knock on the door. He doesn’t bite.”

“And then what do I say to the next President of These United States? ‘Wanna buy a new broom?’”

“Never known you to be at a loss for words. Say, ‘Hello, I’m your new genius press representative.’”

“He won’t be in bed, yet. Doctor Thom’s still down here in the bar.”

“Now, look, Lieutenant, a little clarification of orders would make the troops a little more lighthearted in their marching.”

“This could be damned serious, Fletch. Someone just said the girl is dead.”

“Death is one of the more serious things that happen to people. Now, tell me, Walsh, what girl? Who’s dead?”

“A girl jumped off the motel’s roof. Five minutes ago, ten minutes ago.”

“Terrible! But what’s that got to do with your father? With you? With me?”

“Oh. Then why don’t I take a nice shower, climb into my footy pajamas, and meet your dad at a respectable hour in the morning? Like between coffees number one and two?”

“Oh, that’s why! Walsh, a death in the motel where the candidate is staying shouldn’t even be commented on by the candidate. People die in motels more often than they get warm soup from room service. I’m not saying one thing has to do with another—”

“I mean, you don’t want to make a story by overreacting, by having me rush to your dad’s suite in the middle of the night when I don’t even know the man.”

Walsh coughed again. His voice lowered. “Apparently she jumped, Fletch. They’re saying from the roof right over Dad’s suite. Over his balcony. Photographs have already been taken of the building. Arrows will be drawn.”

“The bored press, Fletch. Starving for any new story. Any new angle.”

“Yeah. Implication being the young lady might have used the balcony of the candidate’s room as a diving board to oblivion. Certain newspapers would make something of that.
Newsbill
.”

“I knew you had something other than pretzels between the ears.”

“Go to Dad’s suite. Answer the phone if it rings. Say you’re new on the job and don’t know what anybody’s talking about.”

“I’ll try to have his phone turned off at the switchboard. But not all switchboards are incorruptible.”

“I seem to remember having corrupted one or two myself. Suite number what?”

“748. I’ll be right up. As soon as I ace the switchboard and do my casual act in the bar. Convince the press we’re not reacting to the girl’s death.”

“Walsh? Give it to me straight. Does the girl have anything to do with us? I mean, the campaign? The presidential candidate?”

Walsh’s voice dropped even lower. “It’s your job, Fletch, to make damned sure she didn’t.”

She was alone in the elevator when the door opened.

In the corridor, Fletch was pulling on his jacket. For a moment, he thought his eyes were playing a joke on him: the girl with the honey-colored hair and the brown eyes.

“Freddie!” he exclaimed. “As I live and breathe! The one and only Freddie Arbuthnot.”

He scooted through the closing doors. In the elevator, the button had been pushed for the eighth floor.

“You never have been before.”

“Listen, Freddie, about that time in Virginia. What can I say? I was wrong. That journalism convention—you know, where we met?—was full of spooks, and I had every reason to think you were one of them.”

“I’m an honest journalist, Mr. Fletcher.” Freddie tightened her nostrils. “Unlike some people I don’t care to know.”

“Honest,” he agreed. “As honest as fried chicken.”

“Famous!” he said. “Everybody knows the superb work Fredericka Arbuthnot turns in.”

“Then, why didn’t you know who I was in Virginia?”

“Everybody knew except me. I was just stupid. I had been out of the country.”

“You don’t read the
Newsworld Syndicate?”

“I make my living writing crime for
Newsworld
.”

“You’re the best. Everyone says so. The scourge of defense attorneys everywhere.”

“Is it true Governor Wheeler is making you his press representative?”

“Haven’t met the old wheez yet.”

“One look at you,” she said, “and he’ll send you back to playschool.”

He followed her off the elevator onto the eighth floor. “What are you doing in whatever town we’re in, Freddie? Interesting trial going on?”

Walking down the corridor, she said, “I’ve joined the campaign.”

“Oh? Given up journalism? Become a volunteer?”

“Not likely,” she said. “I’m still a member of the honest, working press.”

“I don’t quite get that, Freddie,” Fletch said a little louder than he meant to. “You’re a crime reporter. This is a political campaign.”

She took her room key from the pocket of her skirt. “Isn’t a political campaign somewhat like a trial by jury?”

“Only somewhat. When you lose a political campaign in this country, you don’t usually go to the slammer.”

She turned the key in the lock. “Do I make you nervous, Fletcher?”

“You’re going to tell me you don’t know anything about the girl who was murdered in this motel tonight.”

“You don’t know anything about it?”

“She was naked and beaten. Brutally beaten. Don’t need a coroner to tell me that. I saw that much with my own eyes. I would guess also raped. And further, I would guess she was either thrown off a balcony of this motel, or, virtually the same, driven to jump.”

Fletch’s eyes were round. “That only happened a half hour ago, Freddie. You couldn’t have gotten here that fast from New York or Los Angeles or—or from wherever you hang your suspicions.”

“Oh, you do know something about it.”

“I know a girl fell to her death from the roof of this motel about a half hour ago.”

“Dear Fletch. Always the last with the story.”

“Not always. Just when there’s Freddie Arbuthnot around.”

“I’d invite you into my room,” Freddie said, “but times I’ve tried that in the past I’ve been wickedly rebuffed.”

“What else do you know about this girl?”

Fletch stood foursquare to the door which was about to close in his face.

“Freddie! What is a crime reporter doing covering a presidential primary campaign?”

Door in hand, she stood on one tiptoed foot and kissed him on the nose.

“What’s a newspaper delivery boy doing passing himself off as a presidential candidate’s press secretary?”

“Who is it?” The voice through the door to Suite 748 was politely curious. Fletch was used to hearing that voice making somber pronouncements about supersonic bombers and the national budget.

“I. M. Fletcher. Walsh told me to come knock on your door.”

Keeping his hand on the doorknob, his arm extended either to embrace or restrain, Governor Caxton Wheeler grinned at Fletch while his eyes worked Fletch over like a football coach measuring a player for the line. Fletch fingered his collar and regretted having put back on the shirt he had been wearing all day.

Alamo Traces by Thomas Ricks Lindley
Everywhere That Tommy Goes by Howard K. Pollack
GNELFS by Williams, Sidney
Christmas with the Stallions by Addison Avery
Insidious by Aleatha Romig
Pampered to Death by Laura Levine
While England Sleeps by David Leavitt
Log of the S.S. The Mrs Unguentine by Stanley Crawford
Shark Out of Water (Grab Your Pole, #3) by Cooksey, Jenn
Wild Things: Four Tales by Douglas Clegg
Our partner